Belgrade: Serbia’s premier denounced as “scandalous” Australia’s deportation of Novak Djokovic’s for not being vaccinated against COVID-19, while the Serbian president accused Australia of “torturing and tormenting” the tennis star and treating him “like a mass murderer”.

A unanimous ruling by a three-judge bench rejecting Djokovic’s appeal against the cancellation of his visa dealt a final blow to his hopes of chasing a record 21st Grand Slam win at the Australian Open. 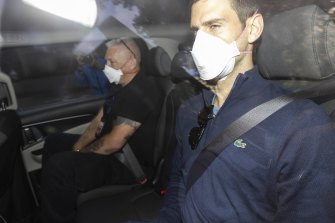 Speaking on the BBC, Serbia’s President Aleksandar Vucic was highly critical of the Australian process that led to Djokovic’s deportation, asking why the process dragged out for 10 days.

“It’s not only the fact that you were tormenting him – you were torturing him. It was not only intellectual but physical torture against Novak… Including the most terrible campaign against one athlete, like he became a mass killer or something like that,” the President said.

“He came to Australia with a medical exemption proposal and then you were mistreating him for 10 days.

“Why did you do it? Doing a witch hunt against him? This is something that no one can understand,” he said. 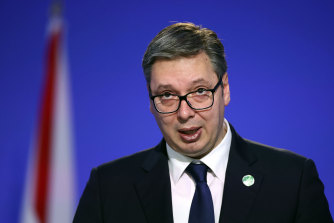 Djokovic’s family said in a statement that they were “very disappointed” with the decision by the Australian authorities, and that the court ruling was related with “politics and all [other] interests.”

“Despite the scandalous behaviour towards Novak, we believed that the sport would win,” the family said.

“I am disappointed…I think it demonstrated how the rule of law is functioning, or better to say not functioning, in some other countries. In any case, I can hardly wait to see Novak Djokovic in our own country, in Serbia,” Brnabic told reporters in Belgrade.

The world’s top men’s tennis player was first detained by Australian immigration authorities on January 6, ordered released by a court on January 10 and then detained again on Saturday, after Australian Immigration Minister Alex Hawke used discretionary powers to cancel his visa.

Djokovic, 34, flew out of Australia bound for Dubai on Sunday evening after saying in a brief statement that he was extremely disappointed by the court ruling and would respect it.

The Serbian Tennis Association (TSS) said in a statement that the “farce is over” and “politics has beaten sport.”

“Novak Djokovic…has been denied an opportunity to win a milestone 10th title (in Australia). Political pressure has led to the revocation of his visa to satisfy ‘public interest’,” the TSS said.

“…It begs the question whether athletes will from now on be incarcerated like criminals and deported when it suits the political interests of powerful individuals,” it said.

Sports Minister Vanja Udovicic, a former professional water polo player, said Djokovic was the best tennis player ever. “Everything else is nonsense and shame, absurdity and hypocrisy! Legend, pride of Serbia, we are with you,” he said.

In the Serbian capital Belgrade, Djokovic’s home city, many support him though some felt he should have been vaccinated.

“I think Australia should be ashamed of itself and that the decision was not a just one. I am sorry for Novak as a tennis player and as a person,” said Danilo Mircic, a student.

“If I were him, I would get vaccinated and avoid problems in the future,” said Aleksandar Janjic, a middle-aged computer programmer.

Reaction to the decision

“I will now be taking some time to rest and to recuperate, before making any further comments beyond this.

“I am extremely disappointed with the Court ruling to dismiss my application for judicial review of the Minister’s decision to cancel my visa, which means I cannot stay in Australia and participate in the Australian Open.”

“We are very disappointed with the decision of the Federal Court and the fact that Novak has to leave Australia.

“This was not just about sports and playing in the first Grand Slam of the season, which Novak has dominated for a decade, but also politics and all the interests that prevailed in this case.

“Despite the scandalous behaviour towards Novak, we believed that the sport would win.”

“I spoke to Djokovic and told him we cannot wait to see him. I told him he is always welcome in Serbia.”

“Today’s decision … marks the end of a deeply regrettable series of events. Ultimately, decisions of legal authorities regarding matters of public health must be respected.

“Irrespective of how this point has been reached, Novak is one of our sport’s greatest champions and his absence from the Australian Open is a loss for the game.

“ATP continues to strongly recommend vaccination to all players.”

“I think that the court decision is scandalous, I am disappointed, I think it demonstrated how the rule of law is functioning or better to say not functioning in some other countries.”

“I welcome the decision to keep our borders strong and keep Australians safe.

“I thank the court for their prompt attention to these issues and the patience of all involved as we have worked to resolve this issue. It’s now time to get on with the Australian Open and get back to enjoying tennis over the summer.”

“It is not great for the tournament because it is better when all of the top players are playing in the event.

“The situation has not been good all round for anyone. It feels everything here happened extremely last minute and that’s why it became such a mess.”

“I’m surprised and I’m shocked. I’m a little bit exhausted as well because we have been hearing about this for a week. I give Novak a lot of credit for trying but at the same time he knew there might be the possibility that with the rules you have to be vaccinated.

“Could we have a new number one? Well, it’s possible. I think so much depends on how much Novak is allowed to travel, how many tournaments he is allowed to play, and in the end, is he going to have to get vaccinated?

“His career is on the line and he might have to do something that he doesn’t really want to do.”

“Novak would never have gone to Australia if he had not been given an exemption to enter the country by the government.

“He would have skipped the Australian Open and been home with his family and no one would be talking about this mess.

“There was a political agenda at play here with the elections coming up which couldn’t be more obvious.”

“I know too little to judge the situation. What I know is that Novak is always the first one to stand for the players. But none of us stood for him. Be strong @DjokerNole”

“A very sad day in history of tennis. It’s sad when politics beat common sense… The law is one for all, but interpretations are different for all. Shameful to target one because of his beliefs, which are different from others.”

“Nole always has and always will be class. He’s an absolute legend in my book that has brought so much good to millions around the world. This isn’t right.”

“This is a sad sad day for tennis, Australia, the Australian Open and obviously for @DjokerNole. I honestly cannot believe it’s come to this….”

“Everyone in tennis from players to coaches to journalists to tv commentators … let’s make a conscious effort to turn the page and give the well deserved attention to the players competing the next two weeks. They have been training for months and it’s their time. Good luck to all!”