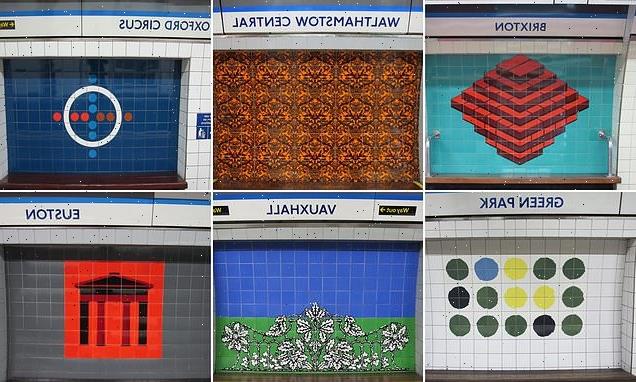 Secret code of the Victoria Line: How every London Tube station along famous north-south route has its own distinct mural with hidden meaning about the area

As the world’s second most frequent train line, very few London commuters waiting on the platform would ever have a chance to look carefully at the pretty patterns on the station walls.

But it’s well worth taking a glance when you next travel along the Victoria line on the Underground, for each of its 16 stops has a beautiful and distinctive mural with a hidden pun or a reference to the local area.

The pattern at Brixton is a pile of red bricks, which is a play on its name; Warren Street has a red and black maze referencing the word ‘warren’, while King’s Cross St Pancras has five crowns in the shape of a cross.

Others have a direct link to the locality, such as a mural at Euston station of the former Euston Arch which was demolished in the 1960s, and Green Park showing 15 dots representing an aerial view of the park’s trees.

Further stations refer to local history, with Highbury and Islington showing a nearby historic manor house built in 1271 but destroyed in 1381; and Tottenham Hale displaying a ferry that used to travel over the River Lea.

Walthamstow has an adaptation of a design by William Morris whose gallery is in the area; Blackhorse Road simply displays a black horse; and Vauxhall shows the Pleasure Gardens that were there from 1661 to 1859.

The Stockwell mural is supposed to represent a swan which refers to the famed nearby Swan pub; and Pimlico has a design based on Peter Sedgley’s painting called ‘Go’ which links the station to the nearby Tate Britain.

The Victoria line, which opened in stages between 1968 and 1972, was the first Underground line opened in 50 years at the time – and now runs one train up to every 100 seconds, making it the world’s second fastest railway line behind the Moscow Metro which is every 95 seconds. In comparison, Crossrail will run every 150 seconds.

Here, MailOnline looks at each Victoria line station, from Brixton in the south to Walthamstow in the north. The series of pictures were taken by photographer Mike Quinn and come after an article on the MyLondon website. 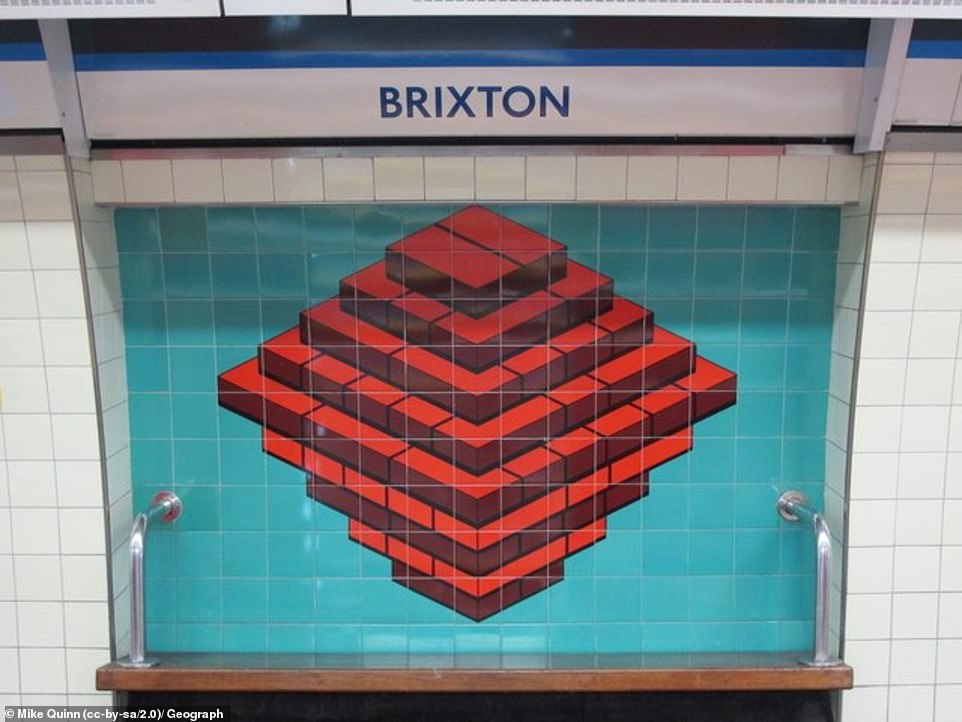 BRIXTON: This pattern by Hans Unger is a pun based on the name of the southern terminus of the Victoria line, representing a ton of bricks. The Victoria line southern extension from Victoria to Brixton opened in 1971, before Pimlico was added in 1972 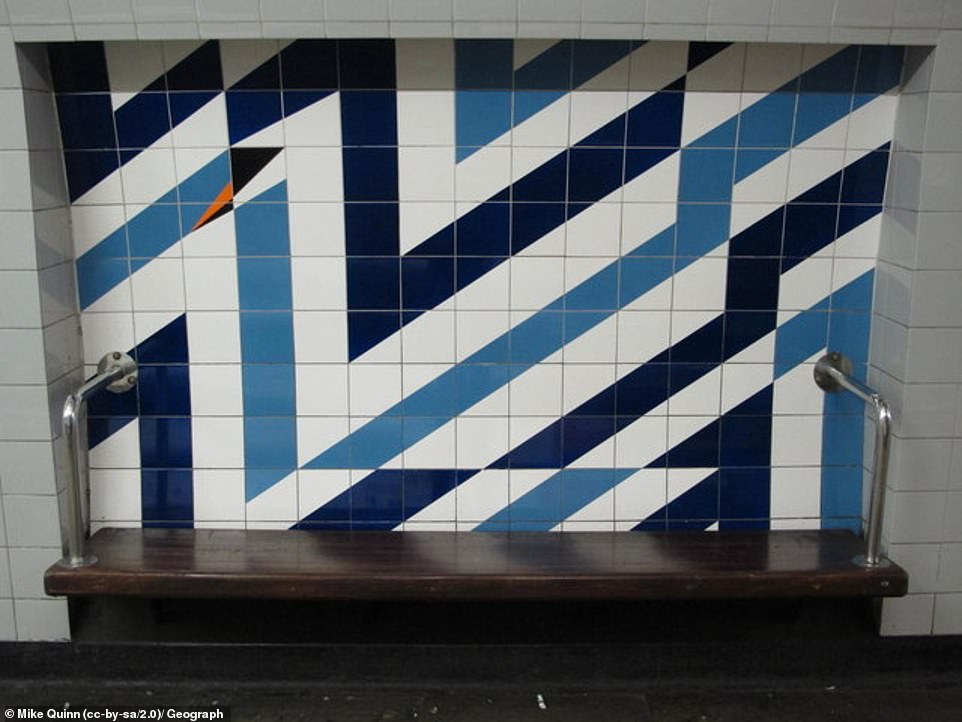 STOCKWELL: The mural at Stockwell station is supposed to represent a swan which refers to the famed nearby Swan pub. The Swan is a popular venue which has existed in its current form since the 1930s, but a pub has been on the site for 400 years 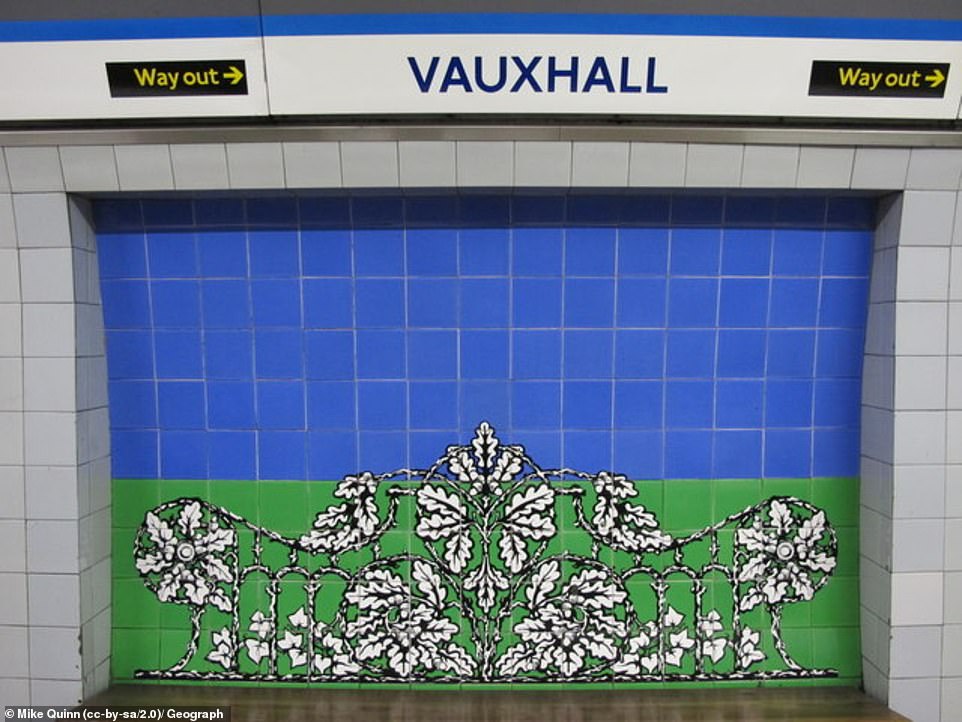 VAUXHALL: George Smith’s mural at Vauxhall is intended to show the Pleasure Gardens that were there from 1661 to 1859.  The Victoria line opened in stages between 1968 and 1972, and was the first Underground line opened in 50 years at the time 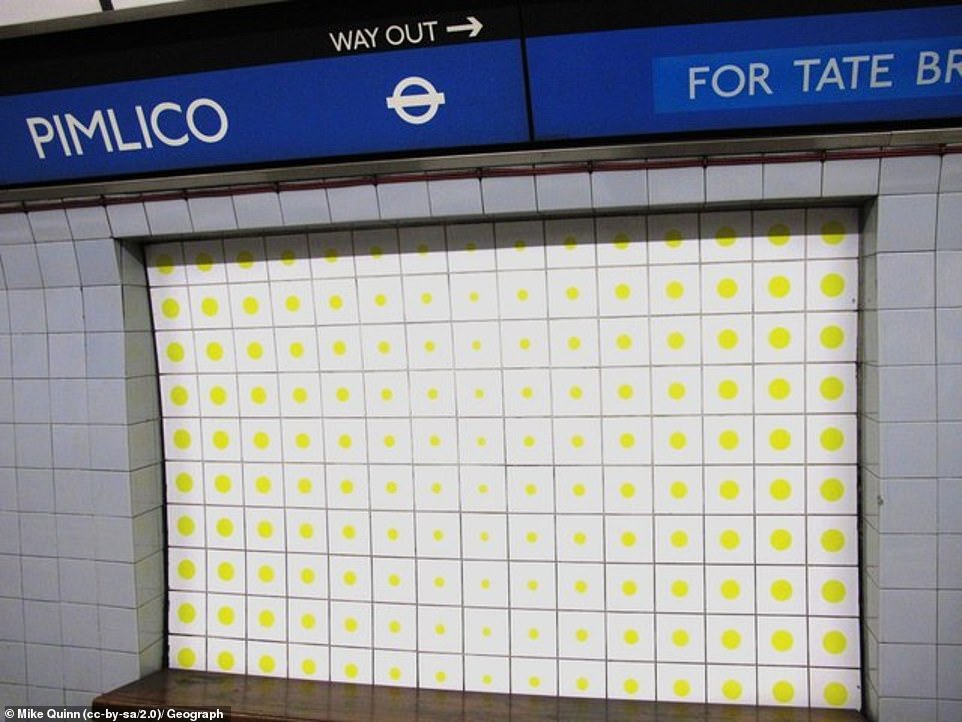 PIMLICO: Pimlico has a design based on Peter Sedgley’s painting called ‘Go’ which links the station to the nearby Tate Britain.  Pimlico was the last Victoria line station to open, in 1972, a year after the extension from Victoria to Brixton started running 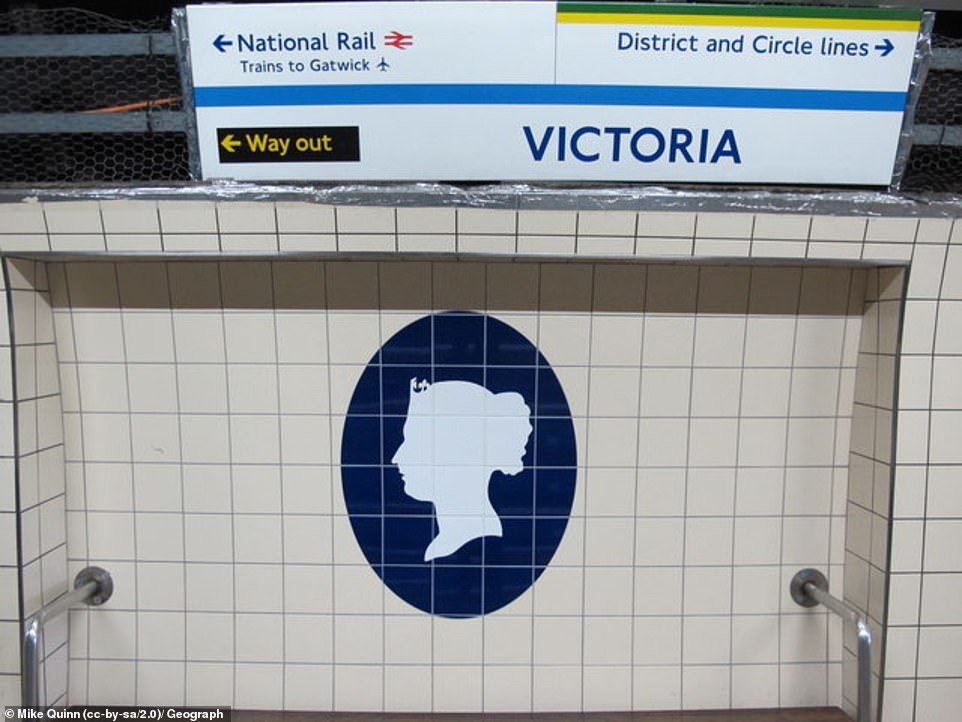 VICTORIA: A simple mural designed by Edward Bawden of Queen Victoria, which was based on a silhouette of the monarch by Benjamin Pearce. Queen Elizabeth II opened the Victoria line in 1969 – which is commemorated by a plaque in the ticket hall 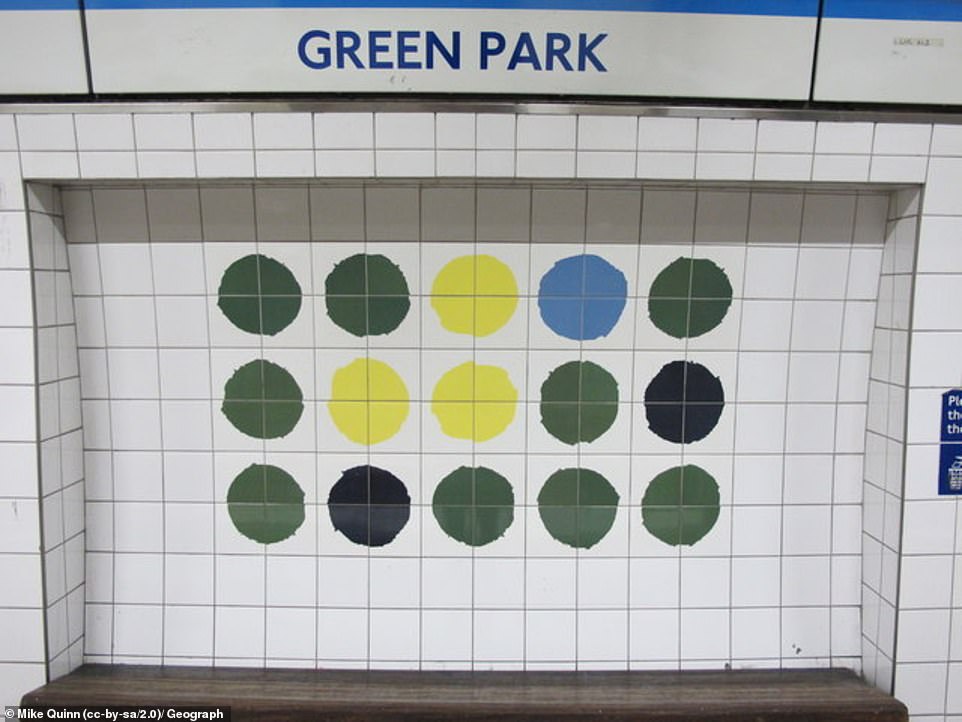 GREEN PARK: This colourful design, by Hans Unger, aims to show an aerial view of the trees at Green Park. The station opened in 1906 as ‘Dover Street’ on what is now the Piccadilly line, before the Victoria line platforms were added in 1969 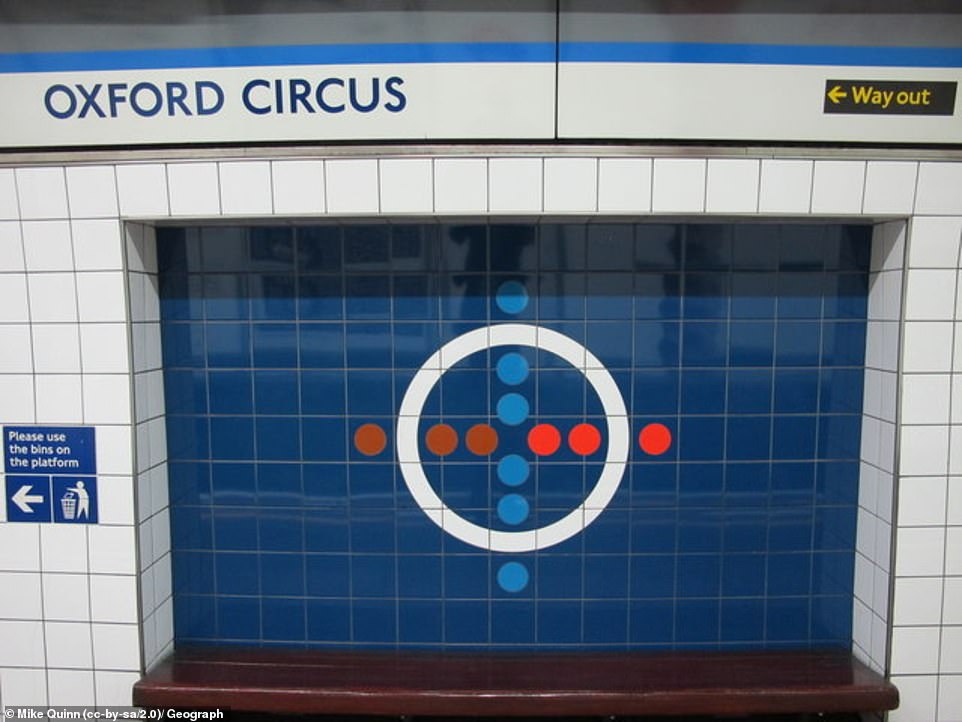 OXFORD CIRCUS: Another tiled mural design by Hans Unger, which is supposed to show the circle of the Oxford Circus road junction and how the Central (in red), Victoria (in blue) and Bakerloo (in brown) lines all have an interchange at the station 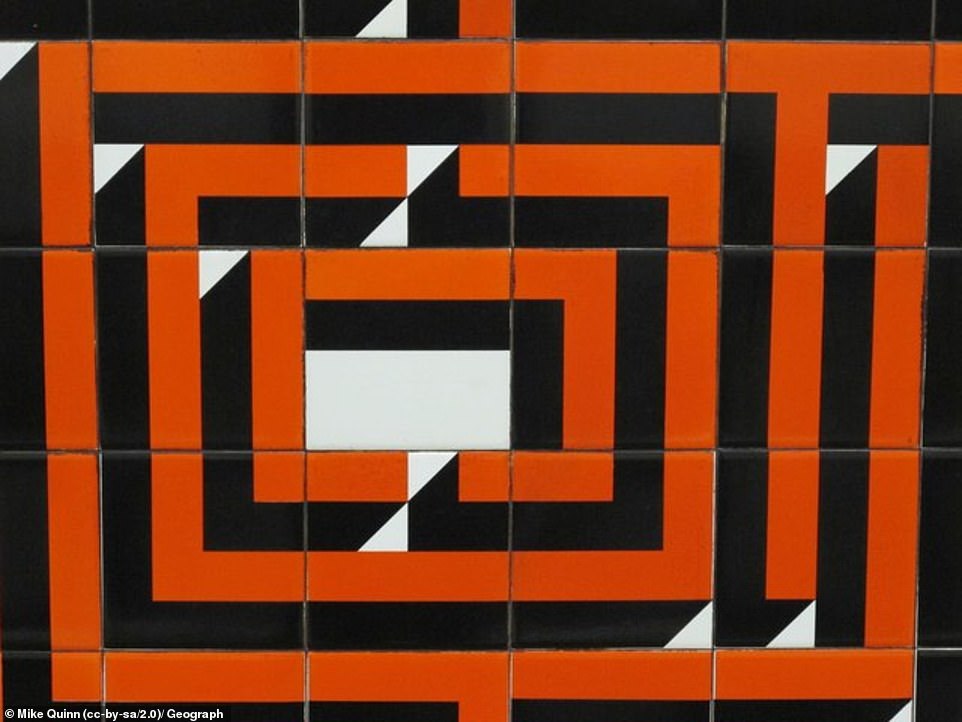 WARREN STREET: Warren Street has a red and black maze – a play on the word ‘warren’ – which was designed by the Crosby Fletcher Forbes partnership. It is possible to complete the maze for commuters who can wait a little longer for their next train 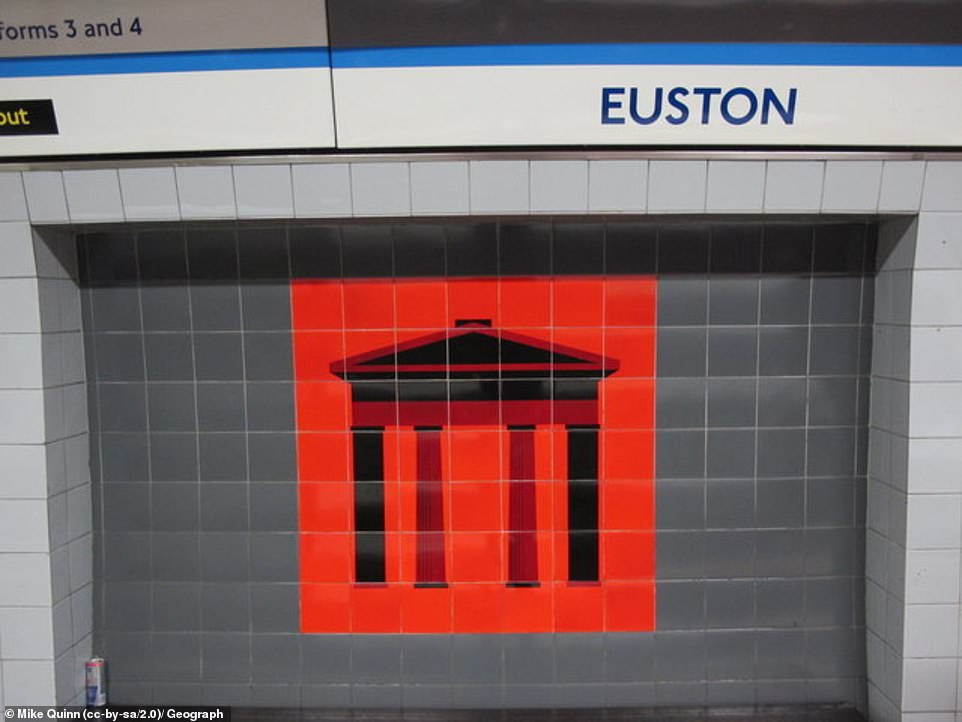 EUSTON: A mural at Euston station by Tom Eckersley shows the former Euston Arch which was demolished in the 1960s. The arch had stood since 1837 but it was taken down so the station could be redeveloped – but it is set to be restored for HS2 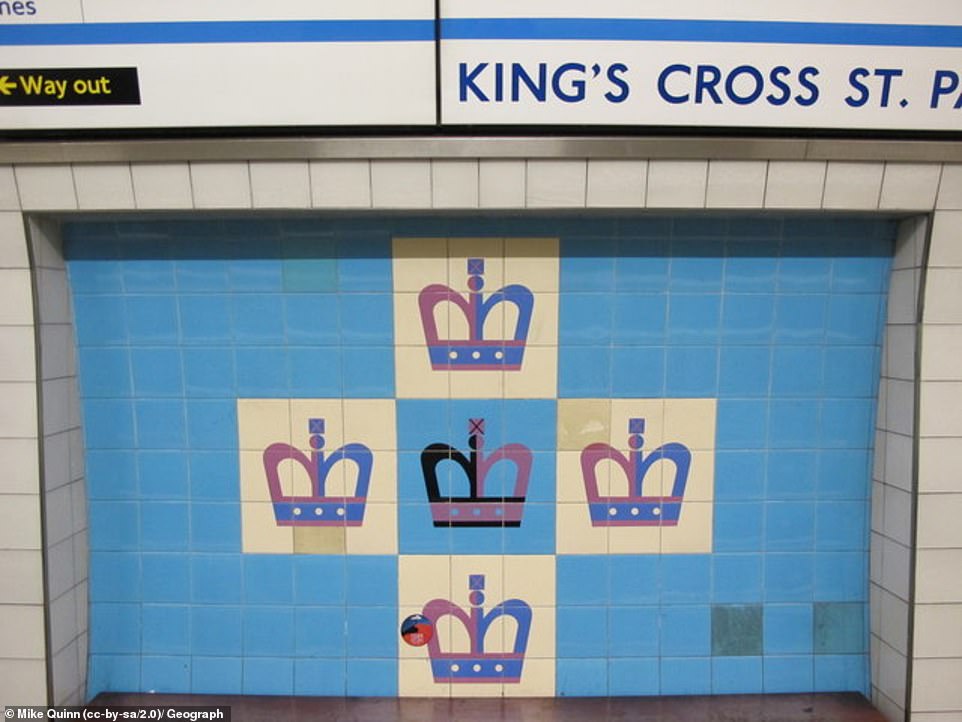 KING’S CROSS ST PANCRAS: The mural at King’s Cross St Pancras, again designed by Tom Eckersley, is a literal interpretation of the name with five crowns in the shape of a cross. The initial station originally opened on the Metropolitan Railway in 1863 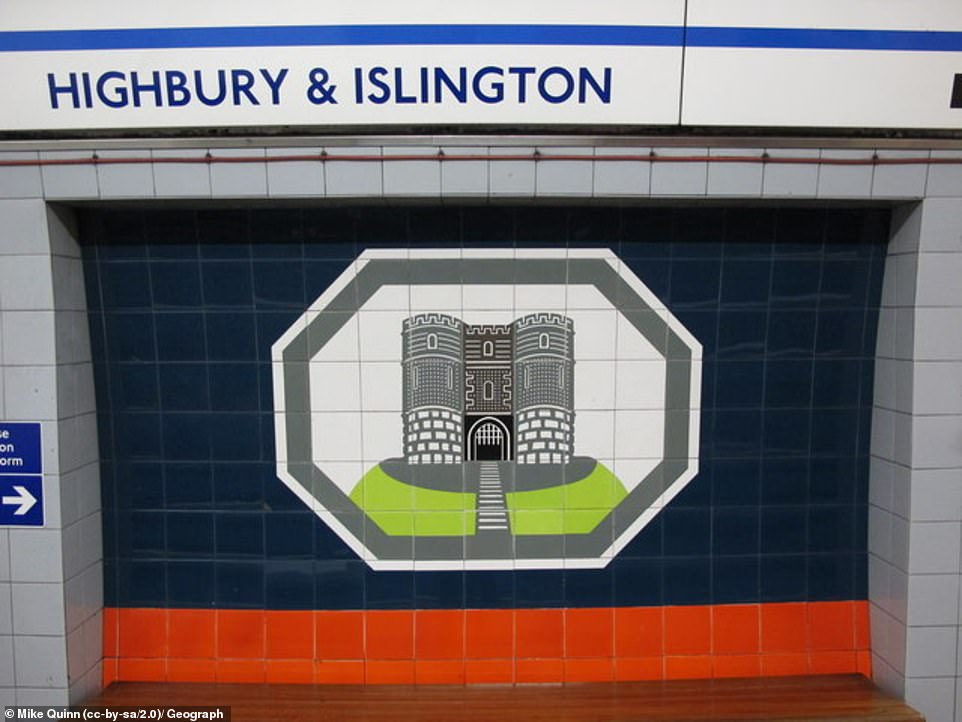 HIGHBURY & ISLINGTON: The mural at Highbury and Islington designed by Edward Bawden shows a nearby historic manor house which was built in 1271 and owned by a military monastic order. It was destroyed in the Peasant’s Revolt of 1381 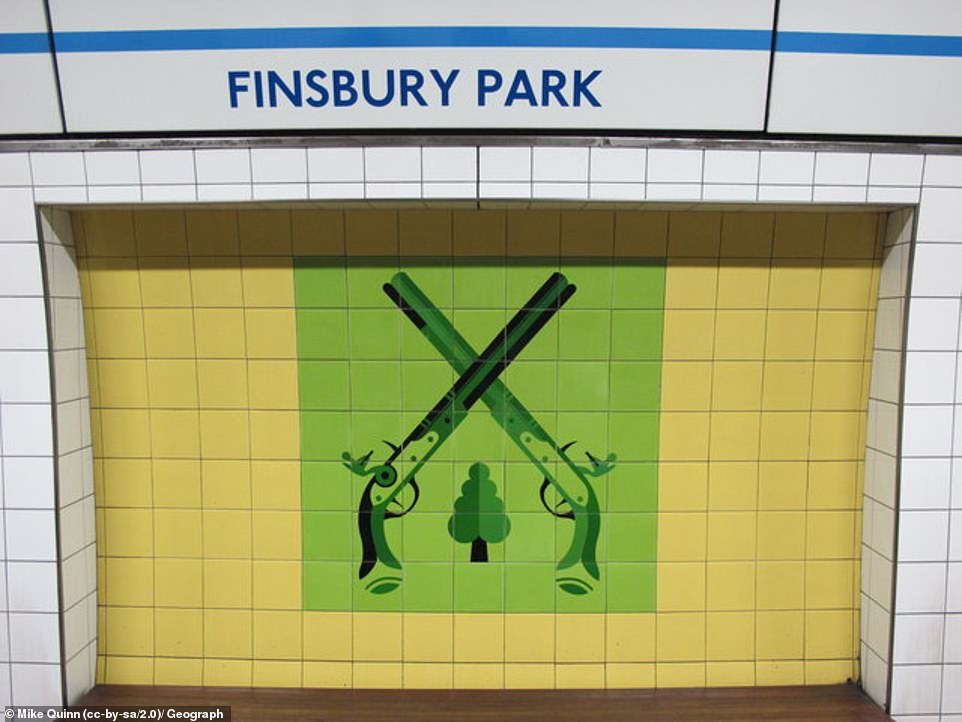 FINSBURY PARK: A site near Finsbury Park previously called Hornsey Wood was used for archery and duelling in medieval times when the area was outside the edge of London – something shown by the crossed pistols in this mural by Tom Eckersley 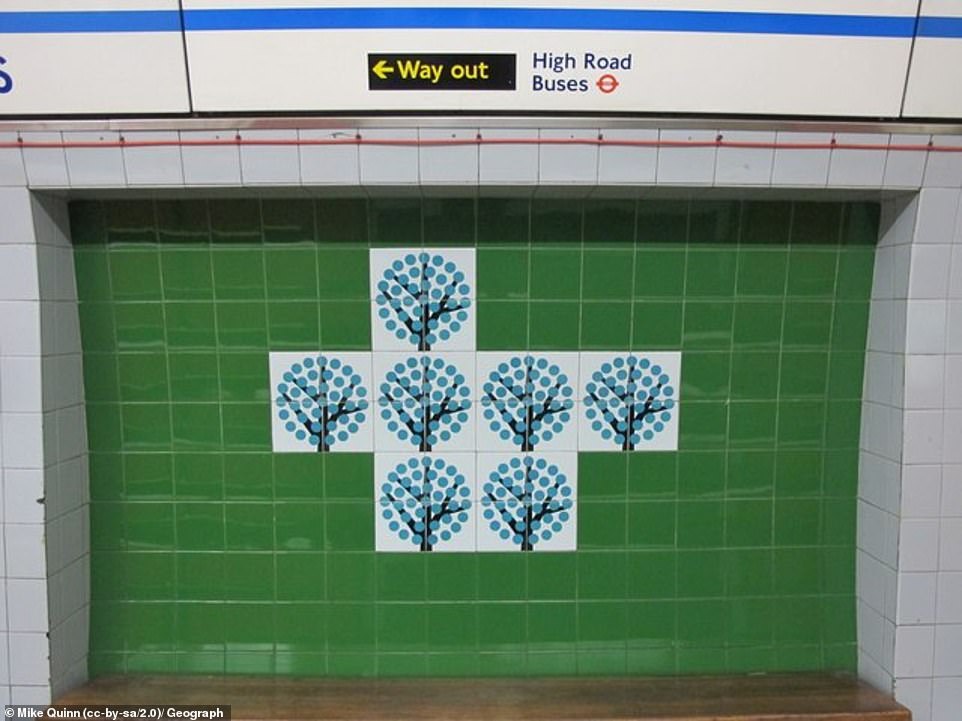 SEVEN SISTERS: This mural by Hans Unger at Seven Sisters points towards the tradition of seven sisters planting seven trees in the area. The trees have been replaced over the years – including in 1996 by a group of five families, each with seven sisters 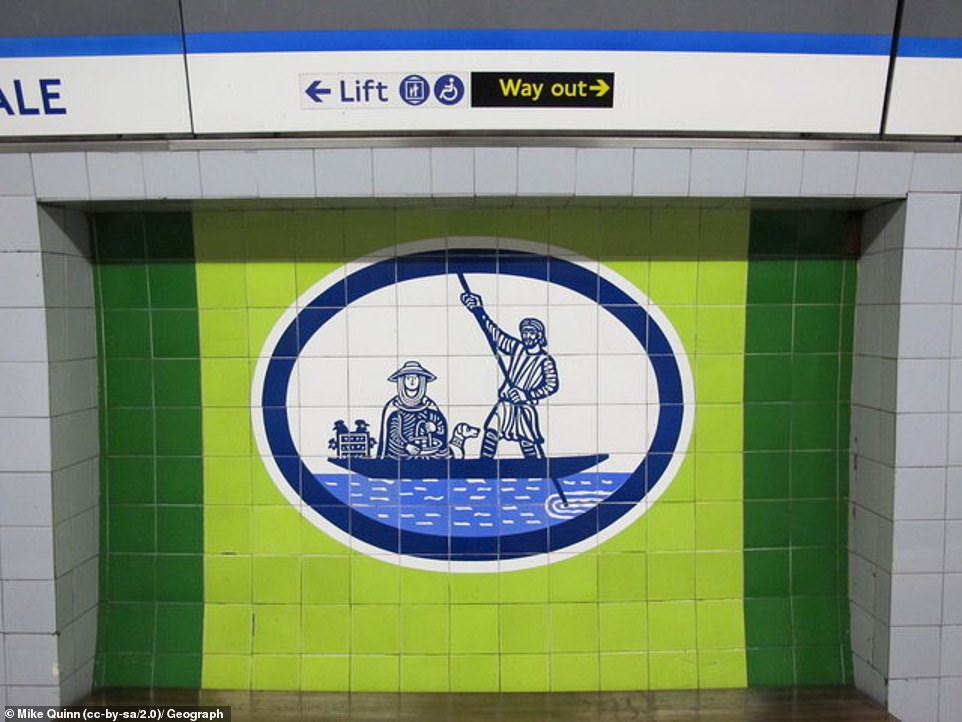 TOTTENHAM HALE: This mural designed by Edward Bawden at Tottenham Hale station points to a ferry which used to carry passengers over the River Lea. The surface-level station was opened in 1840, nearly 170 years before the Victoria line arrived 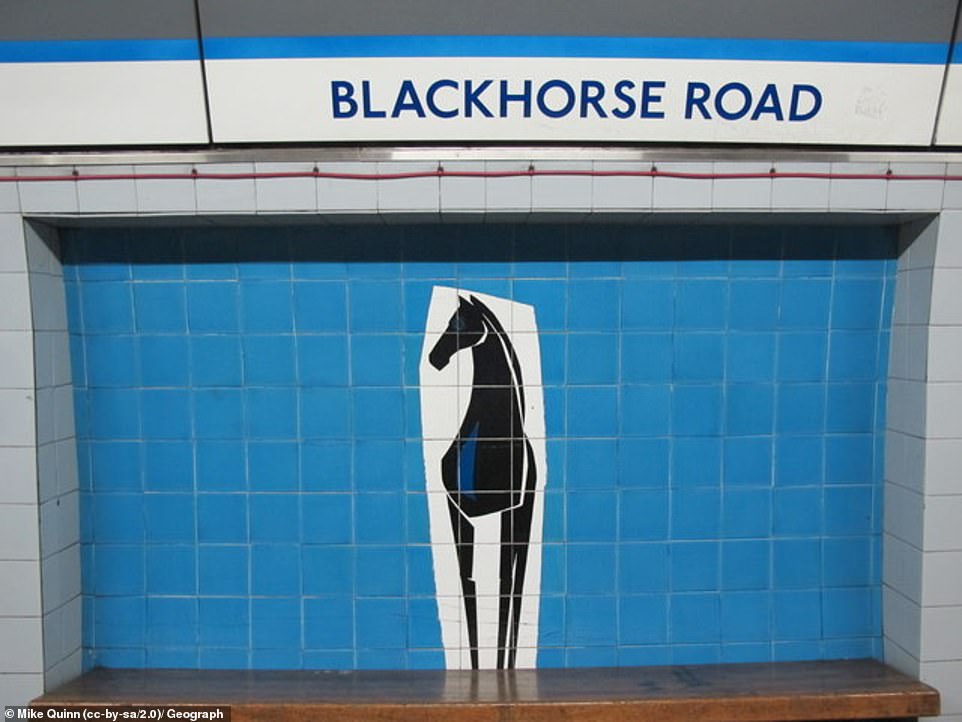 BLACKHORSE ROAD: A simple tiled mural of a black horse was designed by Hans Unger for Blackhorse Road station on the Victoria line. There is also a separate artwork of a black horse outside the station by David McFall called ‘Shying Horse’ 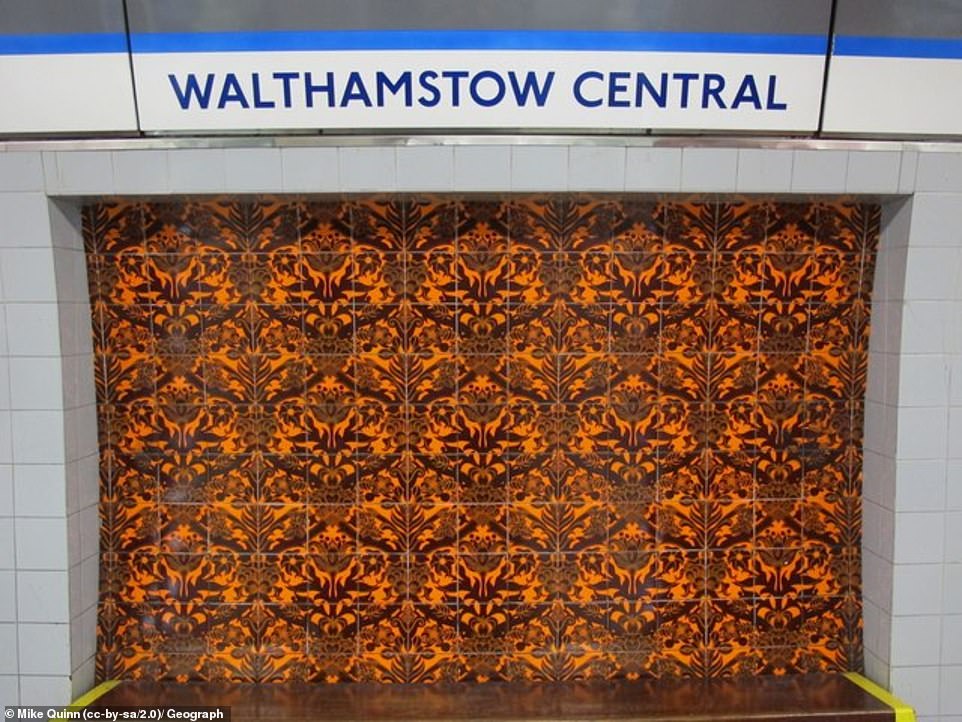 WALTHAMSTOW CENTRAL: The famed Victorian artist William Morris is commemorated in this design by Julia Black at Walthamstow Central station at the top of the line. He lived and worked in the area – and a gallery there now displays his art

The Victoria line, which opened in stages between 1968 and 1972, was the first Tube line opened in 50 years at the time