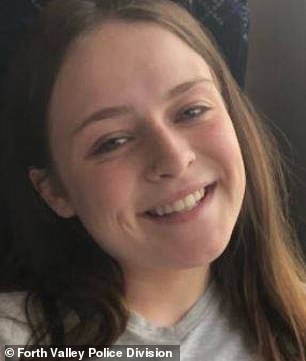 A major police search has been launched after a schoolgirl went missing overnight in Scotland.

Rhya Laidlaw was last spotted in her hometown of Leven in Fife on Friday at around 8am.

The 15-year-old did not return home last night and police were called, who in tern released an appeal.

A spokesman for the Forth Valley force said: ‘She is white, around 5 ft. 4 inches in height, brown eyes, long, straight, brown hair with a slim build. She also uses fake tan.

‘Extensive enquiries have been carried out, however, all attempts to locate Rhya have so far proved unsuccessful.

‘Officers are reviewing available CCTV footage for any information which could assist in locating her.

‘It’s possible Rhya may have travelled to the south west area of Fife as she has friends in that area where a number of enquiries are being undertaken.

‘Anyone who has seen Rhya or who has any information or knowledge as to her whereabouts is asked to call officers at Levenmouth Police Station via 101, quoting incident number 4412 of 6 December, 2019.’