A school which urged teenage pupils to write a note in the first person exploring suicidal feelings has apologised after a shocked parent complained.

GCSE English students at Cheney School, a mixed co-ed comprehensive with 1,470 children aged 11 to 18 in Headington, Oxford, were set the task as part of studying J.B. Priestley’s An Inspector Calls.

One mother, who asked not to be named, called the project – which invited pupils to pretend they were a young woman writing a suicide letter – a ‘massive fail’.

In a statement the school, founded in 1797, said it was ‘very sorry for any distress caused’.

The mother, who has a relative who attempted suicide, wrote a letter to the school’s Head of English.

She said she felt ‘uncomfortable, uneasy and genuinely shocked’ when her child told her about the writing task. 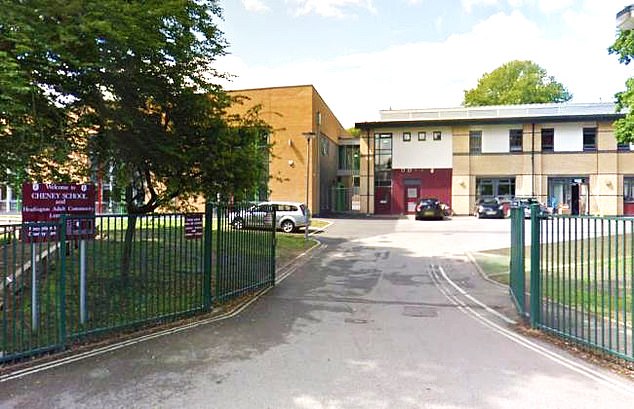 Cheney School, pictured, founded in 1797, said it was ‘very sorry for any distress caused’

‘The actual assignment was to imagine you are a young woman in 1912 writing a suicide letter to those who care about you’ she said.

‘There was no warning, no support, no encouragement.

‘I feel it could be done well to raise awareness of teen mental health and suicide, but this was a massive fail.

‘It is a tumultuous time for them as teenagers.’

She leaves behind a letter and a diary, but is never seen in the play.

In a statement, the school said the suicide note exercise was part of a ‘wider topic on social responsibility’.

It was ‘delivered sensitively’ and students who found it distressing ‘could excuse themselves from the lesson’.

The school said the writing task has since been reviewed and ‘adjusted accordingly’.

But the GCSE curriculum had to ‘address many difficult issues’.

The statement added ‘We will always look to reflect on our teaching and learning practice to make improvements.’ 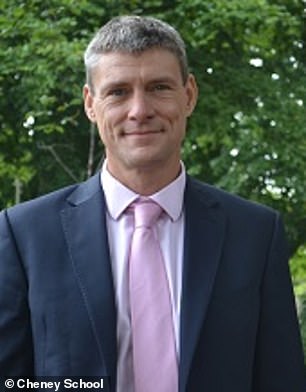 The school said pupils had the right to excuse themselves from the lesson. Pictured: headteacher Rupert Moreton

In 2015 at another school there was a similar in when pupils aged 14 and 15 at Beauchamps High School in Wickford, Essex, were asked to pen a suicide note on ‘An Inspector Calls’ for their English homework.

At the time, Georgie Paige Clarke, 25, the older sister of one girl given the homework, said ‘My sister is reading An Inspector Calls at school and, for her homework, she has to write a suicide note from the girl in it.

‘I’m fine with the fact that, Yes, the girl writes it. But why are teachers thinking it is acceptable to get 13-year-olds to write them as if they were the girl?

Set in 1912, the play depicts a mysterious inspector arriving at the home of a mill owner.

He questions the wealthy family about the sudden death of a young working class hand, Eva Smith.

The Year 10 pupils were asked to think what Eva would have written in her final journal entry.

Beauchamps High School head teacher Bob Hodges, speaking in 2015, said ‘An Inspector Calls is a text which has been set by the exam board, just like Romeo and Juliet and many other pieces of literature.

‘With regard to the homework that was set, it was to write Eva’s last journal entry, explaining her thoughts and feelings.

‘It is part of the syllabus, looking at the themes of responsibility and the role of every character in the play.

‘I am sure every school in the country will be studying something like An Inspector Calls, and this is part of the theme of the text.’

He insisted he had no concerns for any pupils involved who might have had personal connections to suicide cases.

Earlier in 2015, the head of Eastchurch Primary School in Sheerness, Kent, had to apologise after pupils’ homework contained a question relating to ‘putting a bullet through your head’.

In 2012, a Staffordshire school apologised after a pupil’s mother mistook a letter her child had written as part of a creative writing exercise for a genuine suicide note.

For confidential support call the Samaritans on 116123 or visit a local Samaritans branch, see www.samaritans.org for details.