Progreso is home to around 3,000 people and almost all of them have a personal memory of Emiliano Sala.

The footballer lived here until he was 15 and learned to play football on the lush green pitches over the road from the San Martin youth club.

It was in that red brick building, where Sala played basketball and volleyball matches as a boy, that they placed his coffin. On the large windows, white cloth curtains hung to preserve the privacy of events inside.

This was a public funeral for the 28-year-old, who died on January 21 when – for as yet unknown reasons – the plane he was travelling in crashed into the Channel, off the coast of Guernsey.

Over 10,000 kilometres from where the aircraft wreckage was recovered, locals were grateful to have his body back to say one final goodbye, acknowledging that the family of the pilot David Ibbotson do not have that opportunity.

The closed coffin was flanked by several floral wreaths donated from places of significance in Sala’s life, two from local football teams, one from the primary school he attended and from the nearby town of Cululu where he was born. At the foot of the aisle, Sala’s mother Mercedes remained for several hours, crying, embracing and being supported by fellow mourners.

His father Horacio, a truck driver, sat on a white plastic chair in the congregation, back heaving as he sobbed.

The majority of the service took place inside, as people filed in and out, some clutching bunches of flowers, others the number 9 shirt he wore on the pitch. Security guards stood at the double doors, not to turn people away but to ask them to turn off their phones and leave cameras outside, as per the family’s wishes and the mayor of Progreso, Julio Muller, gave an address at one stage.

The most stirring moment of the day came as the doors were opened in order that the coffin be removed from the youth club where Sala had played as a boy.

Girls and boys from Club San Martin de Progreso provided a guard of honour and the several hundred in attendance clapped for continuously as his coffin was carried by his father, brother Dario, former FC Nantes teammate Nicolas Pallois, agent Meissa N’Diaye and others. 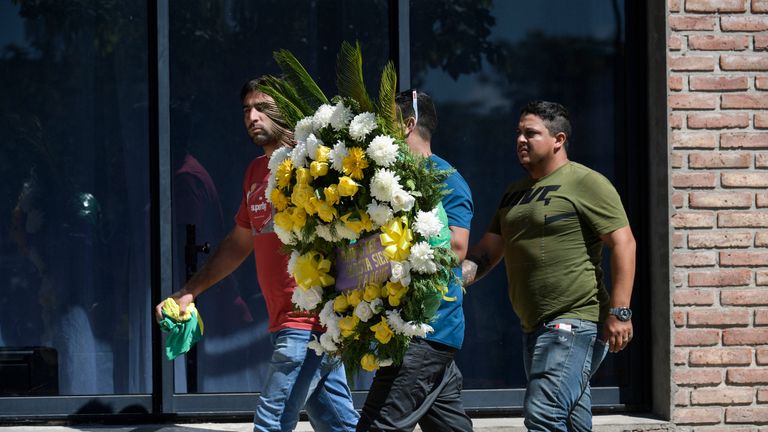 Watched by throngs of international journalists and camera crews, his mother Mercedes kissed the coffin as it was loaded into a waiting hearse while father Horacio looked to the skies.

The main industry in Progreso is agriculture – the Sala family are one of few that don’t actually own land – and most people are working class.

Sala had become their hero, first leaving for Europe as a teenager in an attempt to make it as a professional footballer.

The last time he had returned to visit his hometown he attended a large community barbecue and told people he was going to make it into the Argentina national team.

That contrast as the town gathered to bid farewell yesterday was too much for many to cope with.