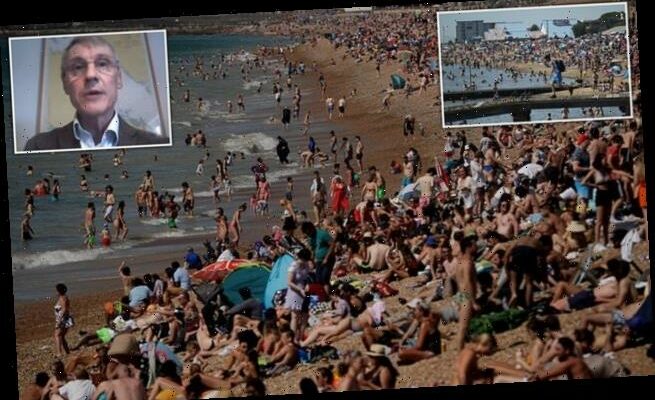 No Covid outbreaks have EVER been linked to crowded beaches, Government adviser claims

Britons hoping for a staycation in the summer have been given fresh hope after a SAGE expert claimed today there has never been a Covid-19 outbreak linked to a beach.

Images of crowded beaches across the UK drew outrage last summer as people flocked to Britain’s coastlines amid uncertainty about foreign travel.

Police were forced to step in and asked people to stay away from some popular spots over concerns that social distancing was impossible on the crammed beaches.

But Professor Mark Woolhouse, an epidemiologist at the University of Edinburgh, told MPs on the House of Commons Science and Technology Committee today that no Covid outbreak anywhere in the world has been traced back to a beach.

He said: ‘Over the summer we were treated to all this on the television news and pictures of crowded beaches and there was an outcry about this.

‘There were no outbreaks linked to crowded beaches. There’s never been a Covid-19 outbreak linked to a beach ever anywhere in the world to the best of my knowledge.’

Experts believe that fresh, breezy air and warm temperatures make it almost impossible for the virus to jump between people.

However, he warned other outdoor mass gatherings – such as horse racing or football matches – were still risky because they have even less opportunity for social distancing and there are ‘pinch points’ at entrances, toilets and food stand. 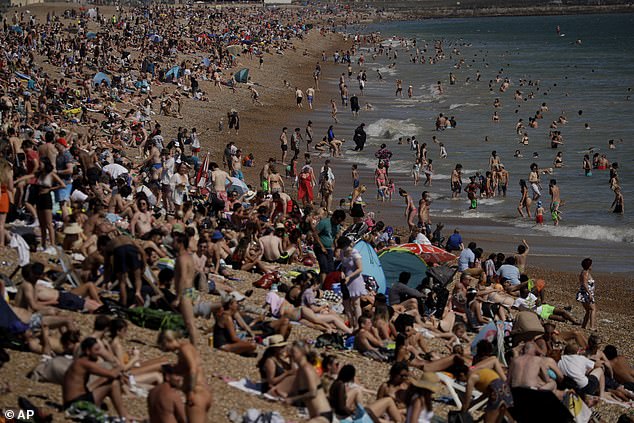 Britons hoping for a staycation in the summer have been given fresh hope after SAGE’s Professor Mark Woolhouse told MPs there has never been a Covid-19 outbreak linked to a beach. Pictured: Crowds on Brighton Beach on June 24 last year

Covid causes infection by piggy-backing on droplets of moisture coming out of someone’s airways and its ability to float in the air is critical for infecting people.

Warmer air is more humid, meaning it has more moisture and droplets in the air bind to the droplets carrying the virus.

This makes them bigger and heavier and causes them to fall to the ground faster, where they are significantly less likely to infect someone.

In cold air, which is naturally drier, they can remain lighter and float for longer, meaning they’re more likely to spread disease.

Viruses tend to find it easier to spread in winter because people spend more time together indoors, where they are forced into closer contact than they would be in the park in summer.

The closer together people are, the more likely they are to spread the virus between them.

People are also more likely to get too little vitamin D in the winter, because they usually make it from exposing their skin to sunlight.

Professor Woolhouse, who is a member of SPI-M, a subgroup of SAGE, told MPs that other outdoor mass gatherings were still risky.

He added: ‘I think we do have to understand where the risks are so that we can do as much as possible safely,’ he added.

Professor Woolhouse said the Government was too slow to reopen schools and outdoor activities in the first lockdown.

‘I think we probably could have considered reopening schools much sooner in the first lockdown,’ he said. 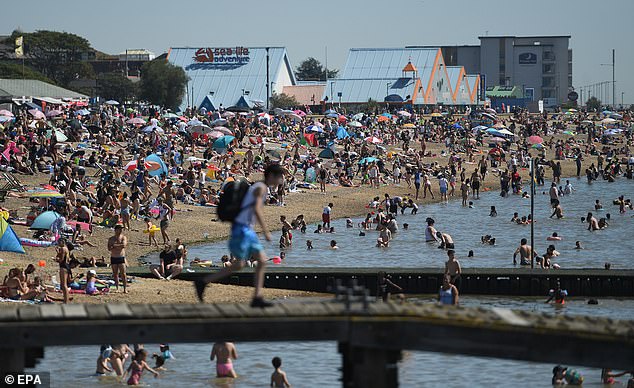 Pictured: Beach goers soak up the sun at the beach in Southend, Essex, on August 7

The roadmap for easing lockdown will be unveiled on Monday, setting out the order in which rules will be lifted and the target dates.

Here’s what we know so far:

Early May – Pubs, bars and restaurants welcome customers, with a maximum of two households allowed to sit together indoors and the rule of six applying outside.

Early June – Rules for pubs and restaurants relaxed with the rule of six extended indoors;

July – Hospitality and domestic holiday industries can operate as normal – but still with social distancing.

‘The other thing, quite clearly, is outdoor activities. Again, there was evidence going back to March and April that the virus is not transmitted well outdoors.

‘There’s been very, very little evidence that any transmission outdoors is happening in the UK.

‘Those two things, I think, could have been relaxed sooner in the first lockdown.’

Psychologist Dr James Rubin, a member of the Government’s Sage, said the public needed to be given clear messages about holidays.

He told the committee: ‘The messaging around holidays is going to be a complex one.

‘I’m not sure messaging around the complexities of the epidemiology is going to be helpful in a public-facing messaging campaign.

‘I think what’s really needed is simply clearer guidance as to what expectations are and aren’t.

‘There needs to be, in the background, a kind of rationale for it.

‘But I just think people need to have their expectations set a little bit clearer as to what they can expect in the future around that.’

It comes as pressure mounts on the Government to unveil its lockdown-easing plans so people can plan their summer holidays.

Cabinet ministers have given conflicting advice on in recent weeks.

Just last month Health Secretary Matt Hancock revealing in January that he had booked a trip to Cornwall, but Boris Johnson urged Britons more recently to be ‘a little bit more patient’ when it came to booking a summer trip.

The Prime Minister today suggested pubs, bars and restaurants will be the final parts of the UK economy allowed to fully reopen under his lockdown exit strategy as the PM faced a growing Tory backlash over the roadmap.

He said his roadmap out of lockdown, which he will unveil on Monday, will be ‘based firmly on a cautious and prudent approach’ to ease restrictions in ‘such a way as to be irreversible’.

The blueprint being discussed by ministers and industry leaders would allow restrictions to be eased only at four-weekly intervals. The gradual approach means traders would have to wait until at least Easter – early April – for a limited restart.

This is likely to include the reopening of holiday lets and larger hotels, with dining rooms still closed.

Sports such as golf and tennis could resume. Pubs, bars and restaurants will have to wait until early May under the plans, with a maximum of two households allowed to sit together indoors and the rule of six applying outside.

The next stage, in early June, would see the rules for pubs and restaurants relaxed with the rule of six extended indoors.

The hospitality and domestic holiday industries could be allowed to return to normal in July – with social distancing.