Patients being discharged from NHS hospitals are still not all being tested for coronavirus — despite scientists warning ministers that the practice should be routine.

They advised ministers in mid-June to make sure that the Covid-19 infection status of individuals ‘should be known at discharge’ but there is still no routine testing going on.

NHS England guidance says all patients who are being admitted to hospital should be tested to make sure they don’t bring the virus in. But they don’t always get tested again before they leave.

Currently only patients being discharged into care homes or other medical facilities must be tested – a rule that came in place in April after uproar that patients were taking Covid-19 in care homes during March.

People who are leaving to private homes do not have to be swab-tested again before they are discharged.

Who is responsible for setting up this testing is unclear, with NHS England saying it follows Government policy, but the Department of Health passing the buck to the Senior Clinicians Group, which is made up of chief medical officers and PHE.

This is despite the fact that Covid-19 is known to spread in hospitals, both between patients and between staff. 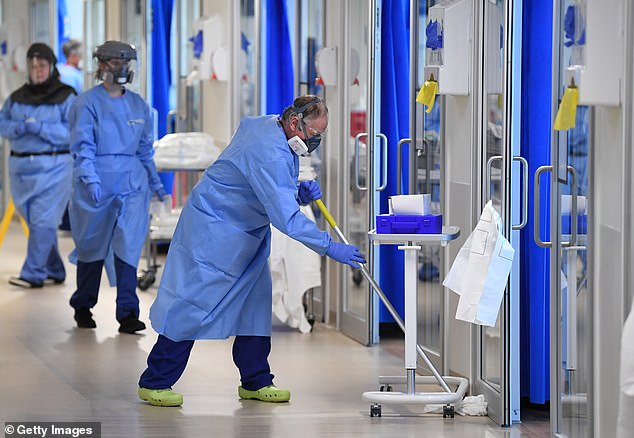 Ministers were warned to test all patients leaving hospital for Covid-19 since May – but still aren’t. Scientists that feed into SAGE raised concerns that infected patients would be ‘reseeding’ infections into the community, documents reveal. Pictured: Clinical staff cleaning a ward at Royal Papworth Hospital on May 5 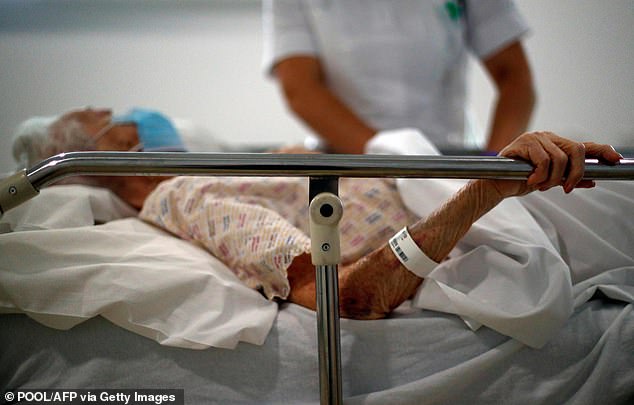 Warnings of hospital patients spreading Covid-19 in the community came as early as May 28, from NERVTAG – a group that advises the government on the threat posed by new and emerging respiratory viruses.

Papers published on June 26, said: ‘Since there continues to be ongoing acquisition of SARS CoV2 infections in hospitals, patients admitted for other reasons may be presymptomatic or asymptomatic for Covid on discharge and might reseed infections into the community.

Hospital wards could become riddled with the coronavirus within the space of just ten hours, research published in June revealed.

It was placed on a hand rail of a hospital bed in an isolation room, where vulnerable high-risk Covid-19 patients are kept separated.

The scientists then sampled 44 different sites across the same ward, including door handles, arm rests and bed rails.

Four in ten of the surfaces – which included toys and books for children in a waiting area – were contaminated with the virus within ten hours.

It was most detectable three days later, when 60 per cent of samples were positive. The virus began to fizzle out after five days.

Experts emphasised the importance of cleaning and workers sticking to good hand-washing and hygiene practises to curb the spread of the virus.

‘Consideration should be given to screening all patients before discharge.’

Later on June 17, similar warnings were made by SPI-M – a group that reports to SAGE on scientific matters relating to the response of a pandemic.

Papers published on July 17, reveal: ‘SPI-M is concerned about the discharge of infected patients from hospital, both into the community and into high-risk environments such as care homes.

‘It is the collective view that the infection and infectious status of all individuals should be known at discharge, and consideration given to quarantine outside the home for potentially infectious persons.’

Minutes from a meeting on June 18 reveal SAGE was concerned about the findings brought to it by the two panels.

They said: ‘Sage reiterated its concerns about the risk of discharging patients from hospital while still infectious. Advice from SPI-M and rom NERVTAG about pre-discharge testing of patients is being considered by the Senior Clinicians Group, which contains those who have accountability for determining actions be taken.’

Hospital acquisition of the coronavirus has been a common occurrence during the pandemic despite infection control.

Prime Minister Boris Johnson has warned hospital acquired Covid-19 has caused an ‘epidemic’ of deaths during the pandemic.

NHS bosses say up to a fifth of Covid-19 patients in several hospitals have contracted the disease while already being treated there for another illness.

And papers published by Sage show that, at the peak of the crisis, transmission within hospitals was believed to account for up to 22 per cent of hospitalised patients and up to 11 per cent of deaths.

Despite concerns raised by leading scientists, health chiefs failed to act and set up screening of all discharged hospital patients, The Telegraph reports.

The matter was put before the UK Senior Clinicians Group, which includes the four Chief Medical Officers, Public Health England (PHE) and the NHS.

The recommendation was not enacted by NHS England, and it is not clear what the response was from PHE or the country’s top doctors.

The Department of Health and Social Care (DHSC) said initially that pre-discharge testing was the responsibility of NHS England, adding that the Senior Clinicians Group was not a decision-making body – as suggested by SAGE.

However, NHS England said the decision did lay in the hands of the Senior Clinicians Group.

Asked whether allowing untested patients to be discharged may have played a role in keeping cases higher in the community, Professor John Edmunds, a member of both SPI-M and NERVTAG, said: ‘That was our fear at the time.’

But Professor Robert Dingwall, a participant of SPI-M, said there would have been other factors to consider when deciding if testing all patients was suitable.

For example, there are dangers of keeping some patients in hospital for too long if they were to show positive for Covid-19.

TIMELINE: HOW NO TESTING OF HOSPITAL PATIENTS LED TO CARE HOME DEVASTATION

March: Official guidance issued by NHS England and the Department of Health said: ‘Negative tests are not required prior to transfers/admissions into the care home.’

This was in place until April 15.

But the ‘peak’ of the virus had already passed — infections were at their highest in the last week of March, and deaths in the second week of April, official figures show.

May 15: During the daily Downing Street briefing, Health Secretary Matt Hancock, the health secretary, said: ‘We will test every resident and every member of staff in our elderly care homes in England between now and early June.’

June 4: Government data revealed the number of people dying in care homes soared by 61 per cent during March and April as the Covid-19 outbreak gripped England and Wales.

June 6: Almost half (43 per cent) of the 264 homes which responded to a survey by the National Care Forum (NCF) said they’d been given void and inconclusive results, despite the Government pledge for all residents to be tested by early June.

July 29: A damning Commons report said care homes were ‘thrown to the wolves’ during the pandemic and the Government’s actions were ‘at times negligent’.

The social care crisis was exacerbated further by a series of ‘reckless’ and ‘appalling’ policy errors – and advising hospitals to discharge thousands of patients into care homes without knowing if they had coronavirus was an example of this, the Commons public accounts committee report said.

Professor Dingwall said: ‘The problem is that the PCR tests are so sensitive that they can detect RNA when the virus itself is inactive and no longer infective. It is only being cleared from the body.

‘This can go on for several weeks so you would be keeping people in hospital unnecessarily, tying up beds and exposing them to risks of other infections like MRSA.’

‘Nervtag was expressing a view on a potential risk at the time, but NHS England and DHSC were entitled to take a broader view of the likely benefits and harms and come to a different conclusion.’

He added that it has become clear silent carriers of the coronavirus are rife in the community, and so the addition of discharged patients with the infection would have made ‘little difference’.

However, the discharge of elderly patients into care homes has been blamed for the huge impact Covid-19 had on the care sector.

In March the NHS was keen to free up hospital beds for incoming Covid-19 patients, and the Government said testing was not necessary on discharge.

It is unclear how many patients with coronavirus were moved into care homes during the coronavirus crisis due to a lack of testing. The full scale of the problem will likely never be uncovered.

It could be as many as 16,000, according to analysis by The Times in July.

NHS England data shows at least 25,000 patients were moved from hospitals to care homes between March 17 and April 15, and a Freedom of Information request suggests two-thirds were not tested

But the figure could be lower or higher because there is no official national data to show the scale of the problem.

Health Secretary Matt Hancock has previously said it was ‘important to remember’ hospital was also a dangerous place to pick up the virus. Therefore it is appropriate in many cases for patients to go to a care home.

Commenting on the claims made about hospital screening today, a DHSC Spokesperson said: ‘The current clinical advice is that testing of individuals without symptoms should be used where clinically appropriate, predominantly for outbreak investigation and infection control. We continue to use the latest science and clinical advice to inform our approach.

‘Anyone who has symptoms of coronavirus can get a test and we are continuing to ensure that testing is as easy and accessible as possible.’

An NHS spokesperson said: ‘Government is responsible for setting policy on testing, which hospitals continue to carry out.’