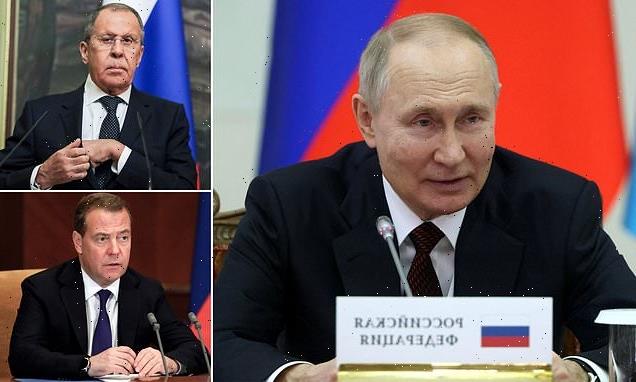 The West is trying to assassinate Putin, start a nuclear war and create a ‘Fourth Reich’ in Germany, say the Russian president’s cronies in their bizarre predictions for 2023

The accusation from top Kremlin diplomat Sergei Lavrov is among new deranged predictions for 2023 from the Russian dictator’s closest cronies.

They include the EU collapsing because Britain rejoins and NATO seeking to assassinate the Russian leader, a forecast from the deputy head of Vladimir Putin’s security council, Dmitry Medvedev, a former president and premier. 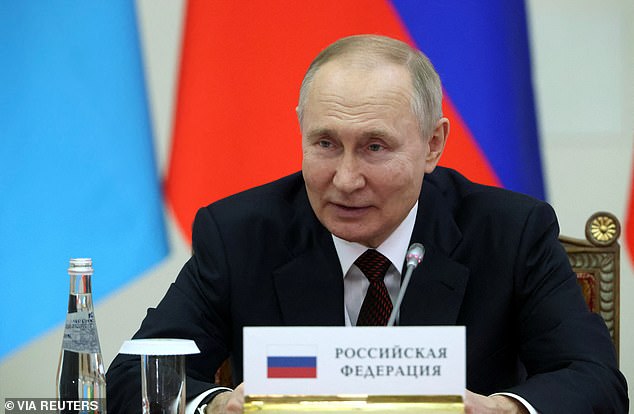 Another bizarre prediction includes the ‘creation of the Fourth Reich on the basis of Germany and satellites that join it’ notably Poland, the Baltic republics, the Czech Republic, Slovakia, Romania, a rump Ukraine based on Kyiv, as well as ‘other outcasts’.

The US could also split with a new civil war seeing California and Texas breaking away, prophesied Medvedev, recently dubbed the Kremlin’s ‘court clown’ despite having held high office, which include a new role announced this week to boost Russia’s production of weapons for the war.

‘Washington is ahead of the others as some ‘anonymous officials’ from the Pentagon actually voiced threats to deliver a ‘decapitating strike’ on the Kremlin, which is in fact a threat of an attempted assassination of the Russian president.’ 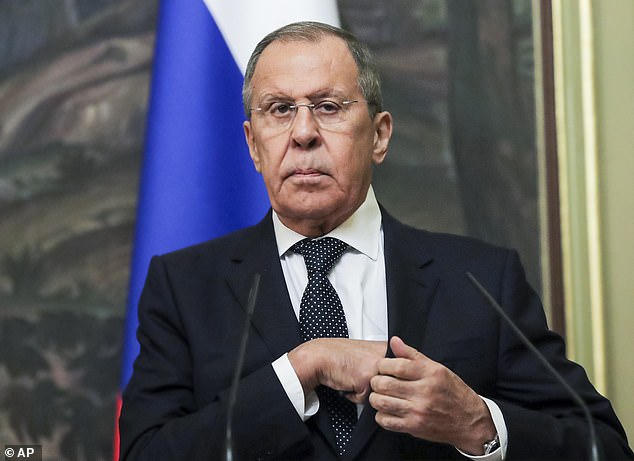 He warned: ‘If such ideas are really pondered by someone, then this someone should think better about possible consequences of such plans.’

The latest fulminations from Lavrov and Medvedev paint the West as seeking conflict with Russia.

‘It seems that they had shed all the vestiges of respectability,’ warned Lavrov, 72.

‘Flamboyant [ex-British PM] Liz Truss is one of the vivid examples as she said straight away in public during her pre-election campaign that she was ready to order a nuclear strike.’

‘This is above the limit. However, we heard much worse statements on behalf of the [Kyiv] regime’s officials.’

He accused the West of ceaselessly hyping ‘with irresponsible speculations that Russia is allegedly on the brink of using nuclear weapons against Ukraine.’

He ignored the repeated threats to use nuclear weapons against Ukraine and the West by Kremlin-controlled TV channels.

‘The political course of the West, which is aimed at the total restraint of Russia, is extremely dangerous.

‘It bears downside risks of a direct armed clash of nuclear powers.’

Lavrov alleged: ‘We are deeply concerned to state the fact of the propagandistic mayhem rhetoric in the United States and in the West in general regarding the nuclear weapons issue.’

He threatened that Ukraine and the West must accept Russia’s demands for the ‘demilitarisation and denazification’ of Ukrainian territory, declaring: ‘There is a little left to do….accept these proposals in an amicable way. Otherwise, the Russian Army will deal with this issue.’ 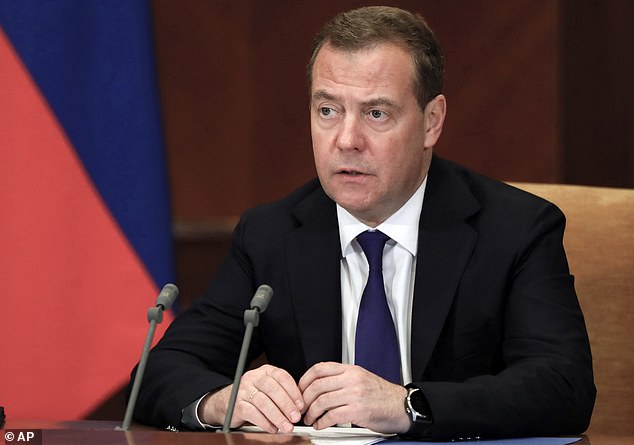 Pictured: Russian Security Council Deputy Chairman and head of the United Russia party Dmitry Medvedev speaks during a meeting on science at Gorki state residence, outside Moscow, Russia on October 3, 2022

Ukraine and the West should end the ‘senseless resistance’ to Putin.

The euro could collapse as the EU fell apart ‘after the return of the UK’, he posted among his ‘futuristic hypotheses’.

Poland and Hungary could gobble up western Ukraine, he claimed.

He forecast ‘war between France and the [new] Fourth Reich’ plus the ‘partition of Europe, including … Poland.’

The surmised about an ‘an American Civil War, the separation of California and Texas into independent states [along with the] creation of the union state of Texas and Mexico.’

Another ‘unexpected and even absurd’ proposal was ‘the subsequent victory of Elon Musk during the US presidential election in some of the states assigned to the Republicans after the civil war’.

Stock markets would gravitate to Asia, while the IMF and World Bank would implode along with the Bretton Woods financial system.

Medvedev said: ‘Before the new year, everyone likes to make predictions.

‘Many exercise in futuristic hypotheses, competing in the proposal of the most unexpected and even absurd. We will also do our part.’