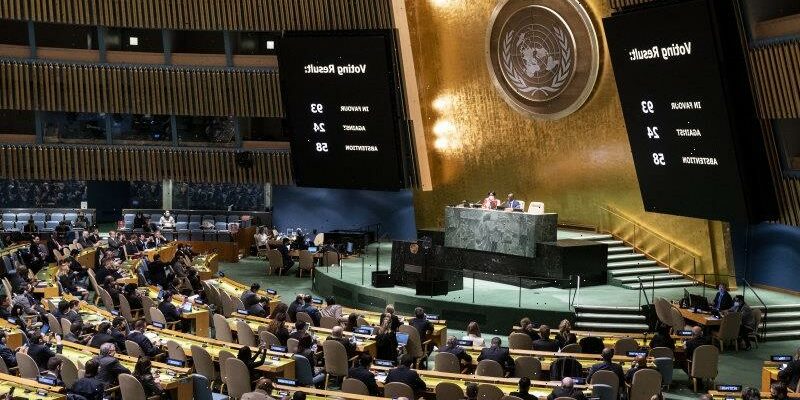 Russia has become just the second country to be suspended from the United Nations human rights body over allegations Putin’s army committed horrific war crimes in Ukraine, including the rape and murder of hundreds of civilians.

The UN General Assembly voted 93-24 with 58 abstentions on Thursday to remove Russia from the Human Rights Council over acts committed in Bucha and several cities and towns outside the capital, Kyiv.

China, Belarus, Syria and Iran were among the nations that attempted to block the resolution, making Russia only the second-ever country to have its membership rights stripped on the UN body. Libya was suspended in 2011 because of violence against protesters by forces loyal to then-leader Muammar Gaddafi.

Ahead of the vote, Australia’s Ambassador to the United Nations Mitch Fifield said: “We do need to send a message now, in real time, to Russia and the world that invading Ukraine and the wholesale slaughter of civilians is not consistent with membership of the UN Human Rights Council.“

Western officials said the high number of nations which abstained showed the extent of Moscow’s bullying and the global discomfort about its actions.

The Kremlin labelled the vote by UN member as “illegal” and “politically motivated”. The Russian news agency RIA quoted Deputy Russian Ambassador to the United Nations, Gennady Kuzmin, as saying Russia had decided to give up its membership immediately,

Russian troops have left behind crushed buildings, streets littered with destroyed cars and residents in dire need of food and other aid as it retreats and refocuses on its efforts the country’s east.

The civilian death toll in the battered port city of Mariupol has passed more than 5000, including 210 children, its mayor said on Thursday as new claims emerged of other war crimes by Putin’s forces.

Vadym Boichenko said the toll also included fatalities from the bombing of hospitals, including one where 50 people burned to death, and that more than 90 per cent of his city’s infrastructure had been destroyed by Russian bombardments. 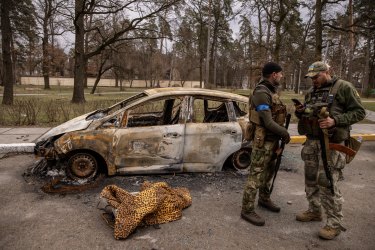 Members of the Ukrainian military stand by a destroyed vehicle on April 06, 2022 in Bucha, Ukraine.Credit:Getty

Ukrainian officials have reported another 118 airstrikes on the city in the past 24-hours.

The meeting in New York marked the resumption of a special emergency session on the war in Ukraine and followed reports of violations committed by Russian forces.

In the past week images have emerged from the city of Bucha, a suburb of the capital, Kyiv, where hundreds of civilian bodies were found in the streets and in mass graves following Russia’s withdrawal from the area.

The US-led resolution expressed “grave concern at the ongoing human rights and humanitarian crisis in Ukraine”. A two-thirds majority of voting members in the 193-member General Assembly in New York – abstentions do not count – was needed to suspend Russia from the 47-member Geneva-based Human Rights Council. 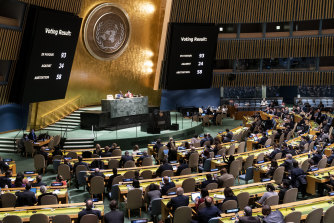 A completed resolution vote tally to affirm the suspension of the Russian Federation from the United Nations Human Rights Council.Credit:

It was the third resolution adopted by the UN since Moscow invaded neighbouring Ukraine on February 25, with the two previous General Assembly resolutions denouncing Russia were adopted with 141 and 140 votes in favour.

Prior to the vote, Ukrainian Ambassador Sergiy Kyslytsya urged countries to support the resolution.

“Bucha and dozens of other Ukrainian cities and villages, where thousands of peaceful residents have been killed, tortured, raped, abducted and robbed by the Russian Army, serve as an example of how dramatically far the Russian Federation has gone from its initial declarations in the human rights domain. That is why this case is unique and today’s response is obvious and self-explanatory,” he said.

Gennady Kuzmin, Deputy Russian Ambassador, called for countries to “vote against the attempt by western countries and their allies to destroy the existing human rights architecture.”

Russia is a veto-wielding permanent member of the UN Security Council, alongside the United Kingdom, China, France, and the US. All currently have seats on the Human Rights Council. Ukrainian President Vlodomyr Zelensky has called for Russia to also be removed from that body.

No permanent member of the Security Council had ever had its membership revoked from any UN body before Thursday’s vote.

In an interview with Britian’s Sky News, Putin’s spokesman Dmitry Peskov said the Russian President was not worried about ending up in the International Criminal Court and that the Kremlin saw no “possibility for that”.

He said that Russia does not support or recognise the International Criminal Court and “we are not the only country in the world who are doing that”.

“And we are interested in a really independent and objective investigation of all the crimes.”