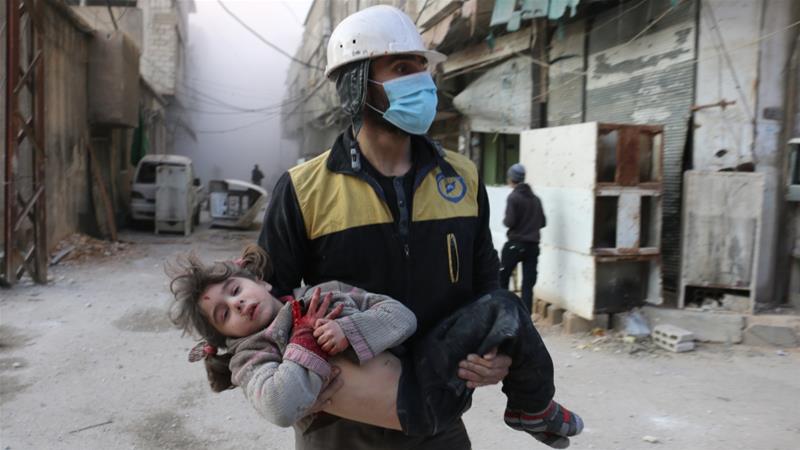 A five-hour “humanitarian pause” called by Russia has come into effect in Syria’s Eastern Ghouta to allow civilians to evacuate the area that has been under continuous aerial bombardment.

Russia’s President Vladimir Putin had ordered a truce from 9am-2pm (7:00-12:00 GMT) on Tuesday, as air attacks and ground operations killed more than 550 civilians in the last eight days, according to the Syrian Observatory for Human Rights (SOHR).

On Monday, a suspected chemical attack killed one child, according to Syria’s Civil Defence rescue team, also known as the White Helmets.

The reported chlorine gas attack injured at least 18 others when it hit Eastern Ghouta’s Al-Shifaniyah town close to the front lines, where rebels are fighting Syrian ground forces who have been trying to penetrate into the besieged enclave since Sunday.

The bombardment of the rebel-held Damascus suburb has been one of the most intense in Syria’s seven-year-old war, exacerbating a dire humanitarian situation in the enclave, home to about 400,000 people.

A United Nations Security Council resolution passed on Saturday, calling for a 30-day ceasefire in Syria, but activists and locals said the shelling continued regardless.

On Monday, UN Secretary General Antonio Guterres called for the immediate implementation of the resolution, describing the situation in Eastern Ghouta as “hell on Earth”.

Eastern Ghouta has been under rebel control since 2013, after which President Bashar al-Assad’s government imposed a siege on the area in an attempt to drive out opposition fighters.

Fighting is continues elsewhere in Syria as Turkey presses its offensive against a Kurdish militia in Afrin, rival rebel groups fight each other in western Idlib province, and a US-led coalition targets Islamic State of Iraq and the Levant (ISIL, also known as ISIS) in the east.