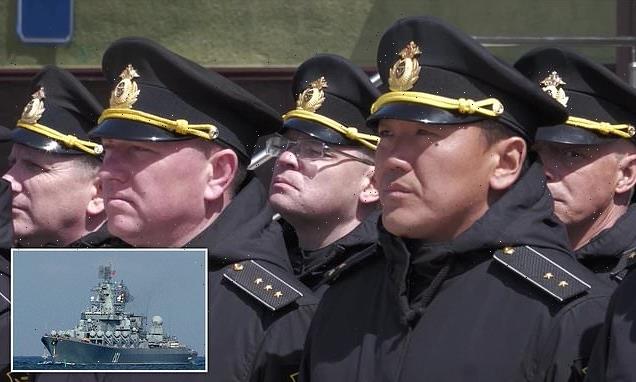 Mystery of Moskva’s crew: Russia releases video claiming to show survivors of doomed warship including captain who was said to have been killed by Ukrainian missile attack

Russia has released a video that claims to show the survivors of the doomed sunken Moskva warship, including the captain who was said to have been killed in the Black Sea during a Ukrainian missile attack.

After a virtual Moscow news blackout leading to speculation that hundreds had perished, footage appeared to show the naval chief Admiral Nikolay Yevmenov, 60, addressing naval officers and seamen in the Crimean port city of Sevastopol.

It was unclear when the meeting took place and a TASS report did not say.

One of the officers present resembled 1st rank Captain Anton Kuprin, commander of the Moskva, who the Ukrainians claimed had been killed in the sinking evidently caused by a Neptune missile strike.

In the soundless footage, around 120 sailors and officers can be seen standing at attention in dress uniform during the parade.

It took the Kremlin a day to acknowledge that the guided missile cruiser had been lost, although it claimed the vessel went down as it was being towed to port after a fire broke out on board.

Ukraine claimed the entire 510 crew of 12,500-ton vessel, including Anton Kuprin, the commander of the Black Sea Fleet, had died. If true, it would represent the Russian navy’s greatest loss of life at sea since World War II. 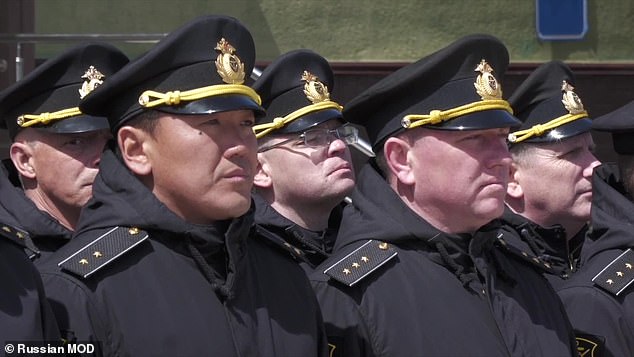 After a virtual Moscow news blackout leading to speculation that hundreds had perished, footage showed the naval chief Admiral Nikolay Yevmenov, 60, addressing naval officers and seamen in the Crimean port city of Sevastopol 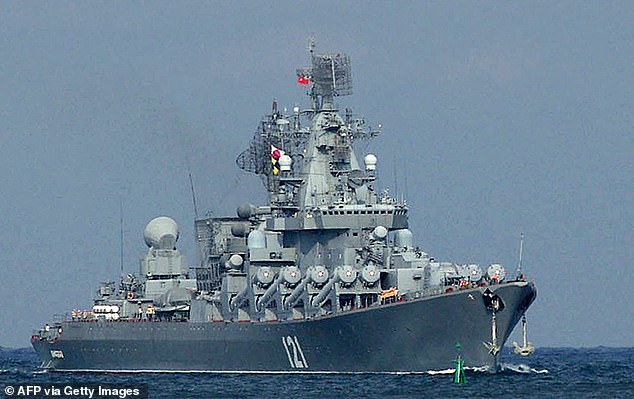 The Moskva is a 12,500 tonne Project 1164 Slava class guided missile cruiser that was first launched in 1979. She replaced the Kynda-class cruiser Admiral Golovko as the flagship of the Russian Black Sea Fleet 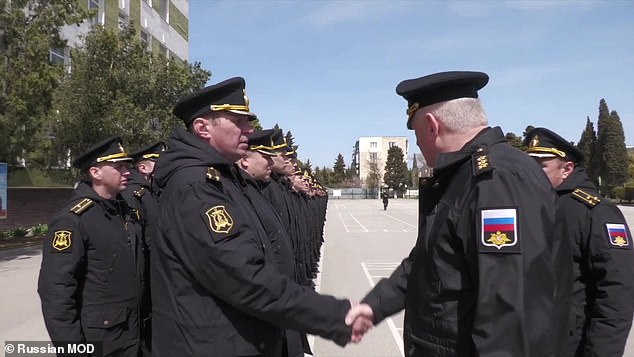 One of the officers present resembled 1st rank Captain Anton Kuprin, commander of the Moskva, who the Ukrainians claimed had been killed in the sinking evidently caused by a Neptune missile strike 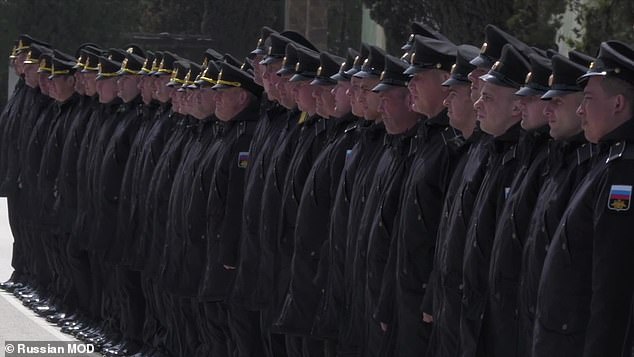 Russia has released a video that claims to show the survivors of the doomed sunken Moskva warship, including the captain who was said to have been killed in the Black Sea during a Ukrainian missile attack 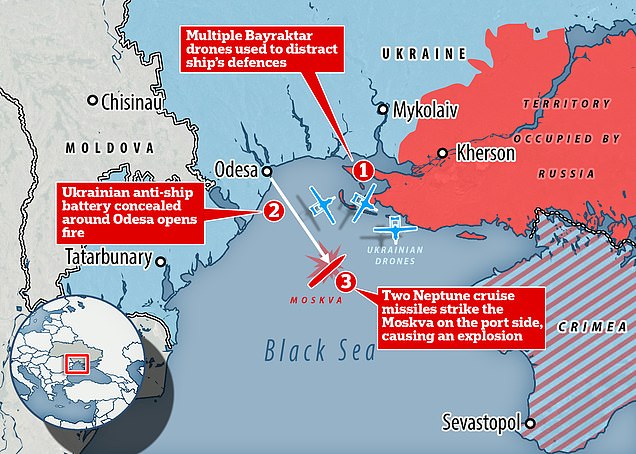 Russian Telegram accounts with links to the Wagner Group claim Bayraktar drones were used to distract the Moskva’s radar systems before a coastal battery opened fire somewhere near Odesa, hitting the ship with two Neptune missiles 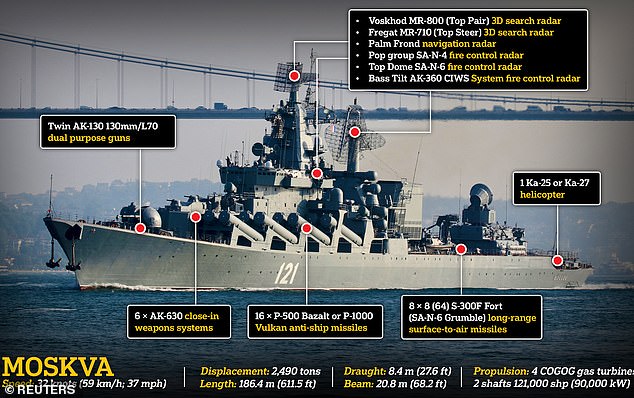 Natalia Gumeniuk, a spokeswoman for Ukraine’s southern military forces, said: ‘We saw that other ships tried to assist it, but even the forces of nature were on Ukraine’s side because the storm made both the rescue operation and crew evacuations impossible.’

The Russian defence ministry denied those claims and insisted the crew had been successfully evacuated and returned to their base in the Crimean city of Sevastopol.

Last night, a 38-second video emerged on social media that claimed to show the crew being greeted by Admiral Nikolai Yevmenov, commander of the Russian Navy, in a military parade in Crimea.

The veracity of the footage could not be verified and several dozen people were pictured on Friday holding a vigil in a town square in Sevastopol. A wreath left by a Russian navy monument bore the message: ‘To the Moskva and its crew.’

There were reports of an eight hour battle to save the ship from sinking. Yet the footage left many questions unanswered.

There were around 150 men visible in sunshine on the Sevastopol parade ground in the Defence Ministry footage, whereas the crew of the stricken warship had numbered more than 500. 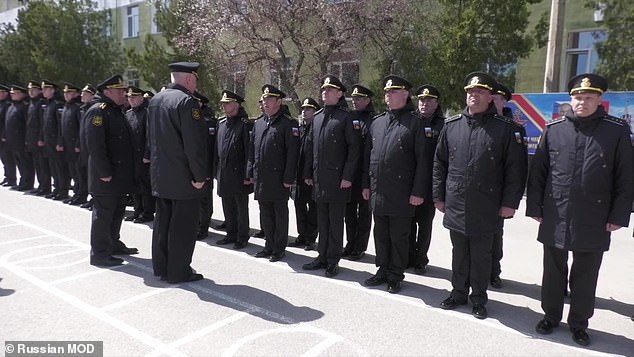 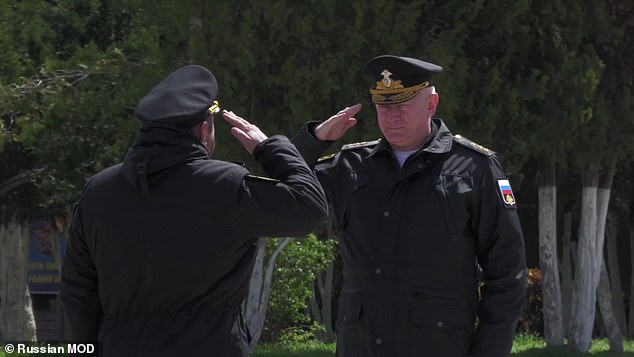 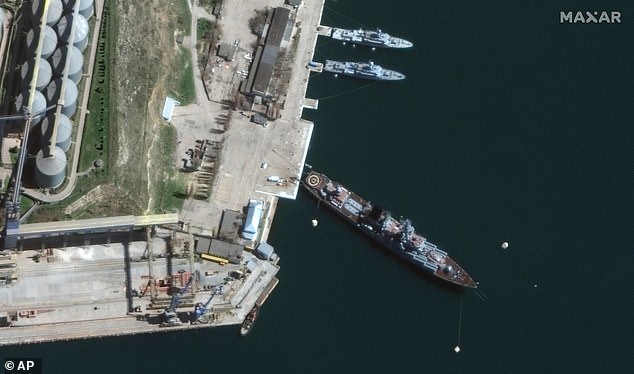 April 7: The Moskva is pictured in Sevastopol, occupied Crimea, which is the home port of Russia’s Black Sea fleet. The Soviet-era ship leads the fleet, and is equipped with anti-ship, anti-air and anti-submarine missiles 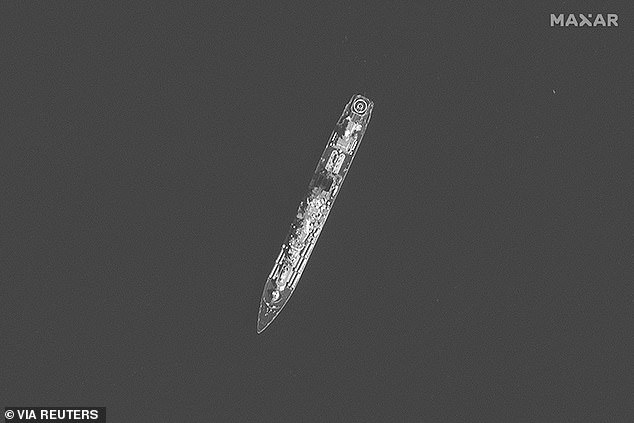 April 10: The Moskva (pictured last week near the port of Sevastopol) has been helping coordinate Russian naval operation in the Black Sea, which has seen ships set up a distant blockade of Ukrainian ports and open fire on cities with cruise missiles

It was not made clear why so many were missing.

The men were lined up in a way to give the impression of a large number present on the parade ground, but hundreds were missing.

There were no references to any fatalities – yet at a vigil yesterday in the city, there were prayers for the lost sailors.

Nor were there references to any wounded from a fire and giant explosion which sank the flagship of the Russian Black Sea Fleet.

She replaced the Kynda-class cruiser Admiral Golovko as the flagship of the Russian Black Sea Fleet.

Although it is not a new ship, the impressive cruiser was named after Moscow and is armed with 16 fixed launchers for P-1000 anti-ship missiles and rail launchers for 40 Osa missiles.

The missile cruiser usually has a crew of over 500 and contains intricate vertical tubes for 64 S-300 air-defence missiles and an array of guns, making her fire power one of a kind.

Despite Moskva’s impressive features, the ship was sunk when ammunition on board blew up, TASS news agency quoted the defence ministry as saying on Thursday.

A Ukrainian official earlier said the Moskva had been hit by two anti-ship missiles but did not give any evidence.

Russian news agencies said the Moskva was armed with 16 anti-ship ‘Vulkan’ cruise missiles with a range of at least 440 miles. Interfax did not give more details of the incident.

In April 2021, the agency quoted a retired Russian admiral as saying ‘this is the most serious ship in the Black Sea’.

The admiral was shown on TV saying: ‘The crew of Moskva cruiser is at the main base, hero city of Sevastopol.’

‘Officers, midshipmen, contract personnel will continue service in the Navy.’

Conscript sailors on the Moskva would be relieved of their duties in the near future, he said.

However this admission flies in the face of an assurance by Vladimir Putin that no conscripts – usually aged 18 or 19 – were involved in the war.

‘Compulsory [military] service personnel, in line with the law, will be released from May to July, and will leave to be put on military register,’ said the admiral.

A TASS report of the meeting failed to mention that the Moskva had been sunk.

Ukrainian spokesman Anton Gerashchenko asked where the missing men were.

The loss of the Moskva marks the single-largest casualty inflicted by Ukraine on the Russian military during the war so-far and one of the largest ships lost in combat since the end of the Second World War.

It also marks another humiliating loss for Putin’s armed forces, with the Russian leader said to be ‘furious’ after being given the news.

According to Russian media, Putin was informed overnight about the loss of the ship and was erroneously told that the attack was carried out with British weapons.

Putin was ‘furious’ in a way ‘never seen before’, the General SVR Telegram channel said.

The channel claims inside knowledge from a former secret serviceman with links inside the Kremlin.

Neither Ukraine or Russia has given an official account of what happened to the Moskva – though sources speaking to Telegram channel Reverse Side of the Medal, which has links to the Russian Wager military group, have given a detailed account.

According to those sources, the Moskva was sailing in the Black Sea between the Ukrainian port cities of Odesa and Mykolaiv when it was targeted on Wednesday evening.

They struck the ship on the port side, the sources claimed, causing it to partially roll over. Choppy conditions at sea combined with the roll meant the ship began taking on water.

Due to fears that the ship’s ammunition could detonate, the Moskva was evacuated and has now sunk, the sources added.

Ponomarev, writing on his own Telegram account today, gave credence to that account. He wrote: ‘The flagship of the Black Sea Fleet, the missile cruiser Moskva, was launched to the bottom by two Ukrainian-made Neptune missiles.

The sinking of the Moskva: Ukraine’s ingenious ruse that blew apart Russia’s flagship

By Mark Nicol, Defence Editor for the Daily Mail

The pride of Russia’s fearsome Black Sea fleet was taken out yesterday in one of the most cunning operations of the war.

The 12,500-ton cruiser’s protective sensors seemingly did not see the Neptune rockets heading its way because they were tracking Turkish TB2 drones.

Two missiles slammed into the port side of the 611ft Moskva, rocking her violently and causing a catastrophic explosion and huge fires. As flames lit up the stormy Black Sea, the ship’s 510 crewmen frantically climbed into lifeboats and fled.

The surprise attack took place at 2am yesterday as the Moskva, Russia’s main ‘command and control’ warship, was around 60 miles south of Odessa.

The ship’s captain and air defence officers were said to be tracking the decoy TB2s, unaware a pair of Ukrainian-made Neptune R360 anti-ship missiles were heading their way after being launched from an artillery battery on the coastline.

The missiles, each weighing a ton and with a range of 186 miles, approached the Moskva at sea level. Travelling at such a low trajectory in rough seas meant they were difficult to track. They hit their mark.

After the attack, the ageing cruiser – which first launched in 1979 – was initially towed towards Crimea. US intelligence said it was still on fire.

It had been expected to be written off as Russian shipyards are unable to operate because of international sanctions. But last night the Russian defence ministry said the Moskva had in fact sunk ‘while being towed in a storm’, the state news agency Tass reported.

In terms of military hardware, the Moskva represents the largest single loss to Russia’s armed forces since the war began.

Yesterday’s highly sophisticated sortie came just hours after the US acknowledged it was providing ‘direct intelligence support’ to enable precision targeting of Russian assets. It was also the culmination of a lengthy intelligence gathering operation which, the Daily Mail has learned, revealed the ship was operating in what sources described as ‘predictable patterns’ in the north-west Black Sea and often without escorts.

It is customary for large cruisers, in particular flagships, to be accompanied by frigates which provide a protective screen.

But perhaps because they assumed they could operate with impunity, Russian commanders neglected to guard the Moskva. The incident is expected to make Russian naval commanders more wary when operating near Ukraine’s coastline.

The Royal Navy has trained its Ukrainian counterparts in recent years to improve standards. But UK officials played down suggestions Britain could be credited for the operation. Ukraine designed and produced the Neptune missiles used in the attack. Ironically, they are based on a Russian design.

Last night, warship expert Jonathan Bentham, from the International Institute for Strategic Studies, said: ‘Working on the assumption the Moskva was hit by anti-ship missiles, this raises questions about the operational capabilities of the Slava-class cruisers and the state of the wider Russian navy. In theory, the ship’s anti-air defence capabilities should provide enough cover to avoid being hit by a subsonic missile like Neptune.

‘If the third-largest surface vessel in the fleet – behind the Admiral Kuznetsov and the Pyotr Velikiy – is lacking these capabilities, what else is it lacking?’