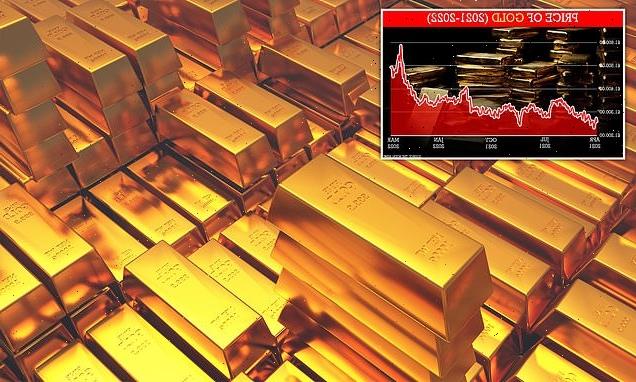 Russia’s $140billion supply of gold could be sold at bargain prices after sanctions by the West halted its trade on the open market.

The country has the world’s fifth biggest gold supply, with more than 2,300 tonnes of gold stored in Bank of Russia vaults in Moscow and St Petersburg.

Vladimir Putin built up Russia’s gold supply after the 2014 invasion of Crimea in order to protect Moscow from the brunt of global sanctions.

But new restrictions by the US, the EU and more prevent Russia’s central bank from doing business with the West.

Global traders and banks, which might typically buy Russia’s bullion in return for currency, now fear the bad PR or direct financial penalties of doing business with Russia.

That means severing one of Russia’s most valuable routes toward economy security – and it appears to be working.

‘This is why they bought their gold, it was for a situation just like this,’ Cork University business lecturer Fergal O’Connor told Bloomberg.

‘But if no one will trade it with you, it doesn’t matter.’

Russia may instead be forced to sell its formerly lucrative supply – worth more than £100 billion – to central banks in India and China.

Those deals will come at a lower price, commodities analysts CPM Group predict.

And the blow to Russia could be even greater if Western politicians expand so-called ‘secondary sanctions’ to punish those buying or selling Russian gold anywhere – including key market China.

Earlier this month City marketplace the London Bullion Market Association – the world’s most important – banned all gold bars made in Russia.

Abroad, however, Russia’s once-reliable gold reserves remain out in the cold.