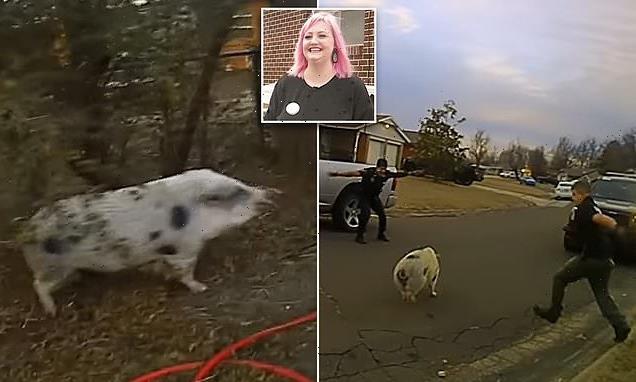 More to love: Owners of a pudgy potbelly pig are battling with Oklahoma officials who say pet swine, Larry, is too big for the city

The owners of a potbelly pet pig that has been labeled too ‘pudgy’ are at the center of a battle with Oklahoma officials regarding the size of their pet, who apparently exceeds the city’s ordinance.

The ordeal began when Larry escaped from his pig pen on Thursday – oinking and running around the streets of Moore and blocking a roadway. He was later detained by police and animal control officers.

After Larry’s capture, the pig’s owner Steffany Jones was issued a warning by city officials citing that Larry was too chubby to be kept within city limits.  Animal control officials gave her a written warning that she had two weeks to relocate her pig – or put him on a diet.

‘They told me if he lost weight that I could keep him,’ she said. It is unclear exactly how much Larry weighs, but the city ordinance states pigs must not exceed 75 pounds and 20 inches.

Now, Jones is in the middle of a fight with officials asking for an amendment to the city’s ordinance. 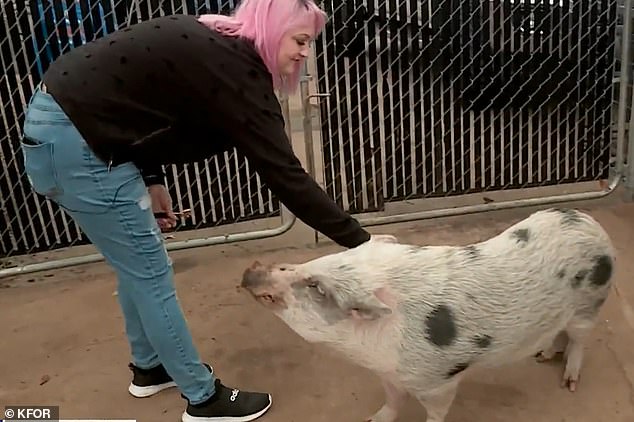 Steffany Jones (pictured) giving her pet pig Larry (pictured) loads of love. Jones said Larry was given to her as a wedding gift from her husband in 2014

The controversy started last week when Larry broke free from his pen and became the town’s runaway pig. Jones said the incident was ‘a complete accident.’

‘He was able to get out of his pen and he walked up the street,’ she said.

Jones told News4 Oklahoma that Larry ‘never had any problems before’ and that he is loved by all.  ‘All my neighbors and their kids love him,’ she said.

Officials, however, weren’t so enamored when they had to respond to a pig that was blocking a road.

Video shows two uniformed officers and animal control personnel chasing the pig down the roadway trying to wrangle him. At one point, after officials cornered him with a cane, the black and white boar can be heard screeching loudly.

One of the animal control officers is seen trying to use a rope to get hold of the animal, who was eventually captured and loaded into the vehicle with a towel placed over his head.

Moore Police Department posted a message on Thursday stating that the pig was ‘safely captured by Moore Animal Control with the wrangling assistance from Moore police officers.’ 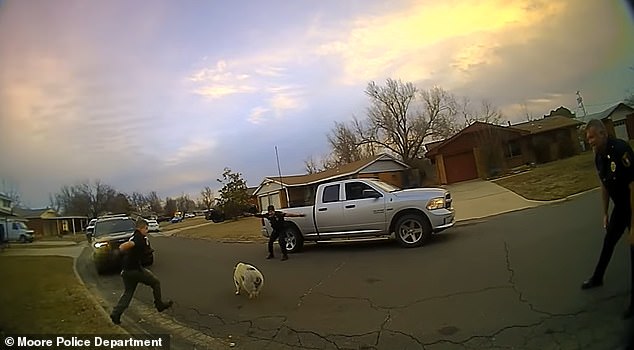 Officers from the Moore Police Department are seen trying to capture Larry during the pig chase that took place on Thursday in Moore, a city in Cleveland County, Oklahoma 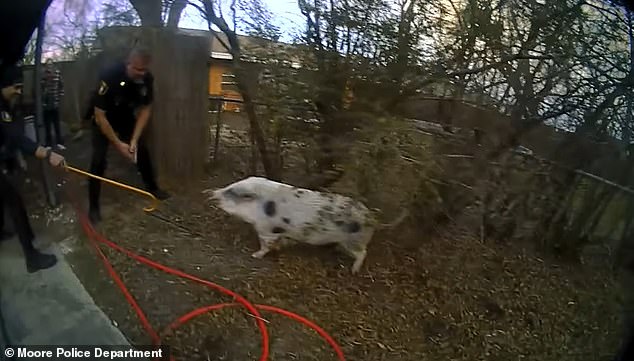 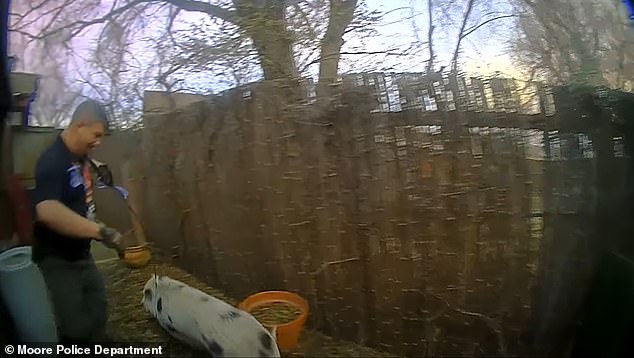 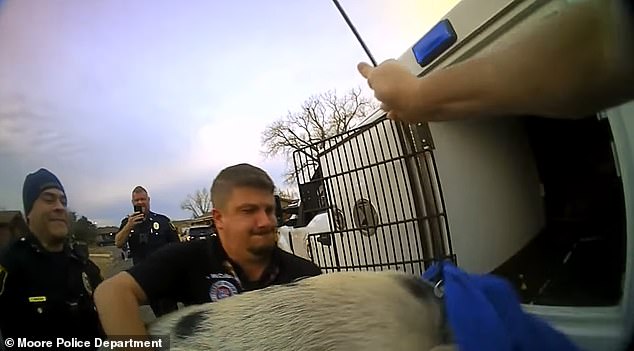 Officers are seen (pictured) placing the pig in the animal control vehicle after his capture, as a blue towel was covering his face. Another officer is seen holding his cell phone taking video of the incident that appeared to cause the pig much distress

Jones, who got Larry as a wedding gift from her husband in 2014, calls him her ‘baby,’ and a member of her family.

‘It was love at first sight,’ she said, telling News4 Oklahoma that Larry goes with her ‘everywhere,’ even ‘sleeping in bed and cuddling’ with her.

Jones said when she got Larry nearly nine years ago, her only requirement was that she had to have paperwork from the vet stating that he is a ‘miniature potbelly,’ and showing official certification.

Jones claimed that she has been a good pig owner over the years and has stayed in touch with animal control.

After last week’s ordeal, however, she was absolutely blindsided.

‘I brought them information from the American Mini Pig Association showing them the size of pigs and they said all they could do was follow the code that was written,’ said Jones, who describes herself as a ‘crazy pig mom.’

Since the incident, neighbors and members of the community have rallied behind her and Larry.

She shares a little background on Larry, who she said is neutered, vaccinated and micro-chipped. She also explains his living accommodations

‘He has his own fenced in yard, lean-to, insulated house with a heater and solar powered air conditioner, blankies and a swimming pool for hot sunny days,’ she wrote.

‘Larry is very well taken care and loved by his family. He also has a 6-year-old boy at home with Autism that would be devastated if Larry was no longer around.’

The movement has spurred more than 4,000 signatures, with a goal of 5,000 that Jones said, has gone ‘national and international.’

‘I have supporters from other countries, and Larry does, too,’ she said. ‘He’s got fans.’

‘Please sign this petition to show support not only for Larry but to help keep all current and future mini pigs in Moore with their families.’

Jones will be at a city council meeting Tuesday night hoping to make a change in the city ordinance. 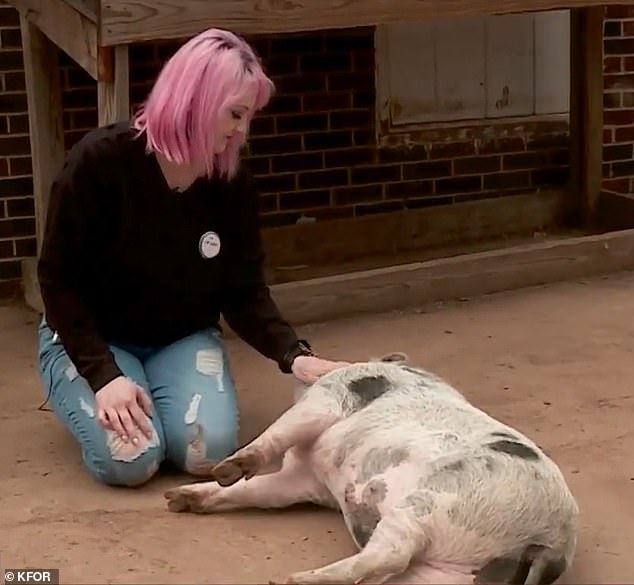 Jones, who calls herself ‘a pig mom’ said that Larry is part of her family. She created an online petition on change.org to help change the city ordinance. The petition has garnered national and international attention and has received thousands of signatures 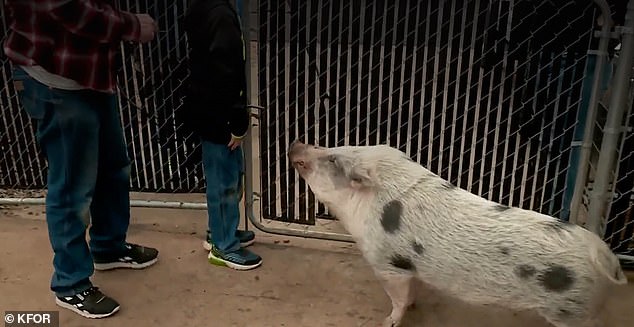 Jones said the neighborhood is rallying behind her as she tries to get justice for her pet pig and all the other pigs that live in her community. Pictured are some unidentified visitors who often visit Larry, who is a welcome addition to the neighborhood, and loved by all, Jones said