A Royal Navy destroyer has seized £1.6million of illegal drugs after intercepting a dhow sailing on the ‘hash highway’ between Iran, Pakistan and East Africa.

A boarding party from HMS Dragon recovered half-a-tonne of heroin and hashish along with 9kg of crystal meth after stopping the boat which was trying to sneak towards East Africa by keeping away from established shipping lanes.

The route is known as the ‘smack track’ because of the volume of heroin that is transported towards Europe. 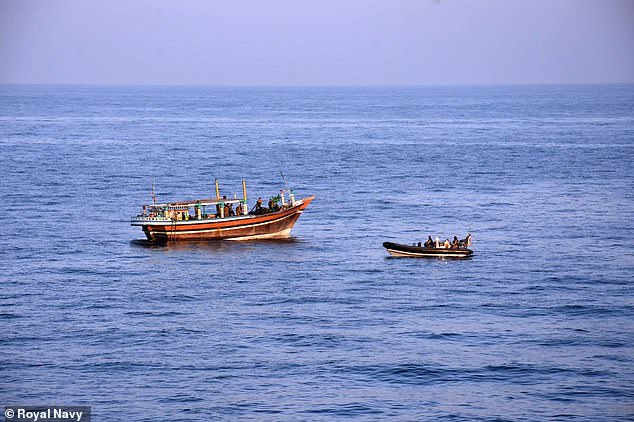 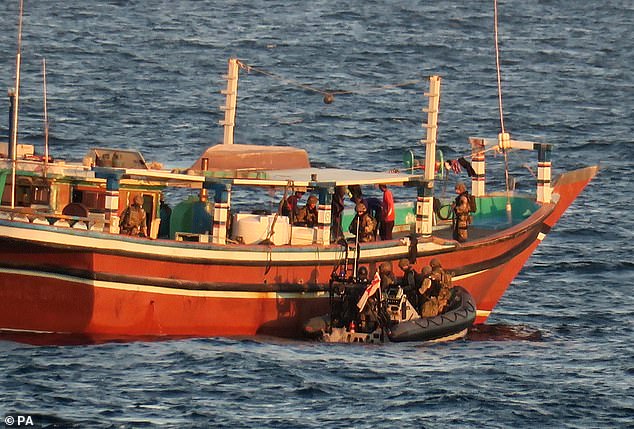 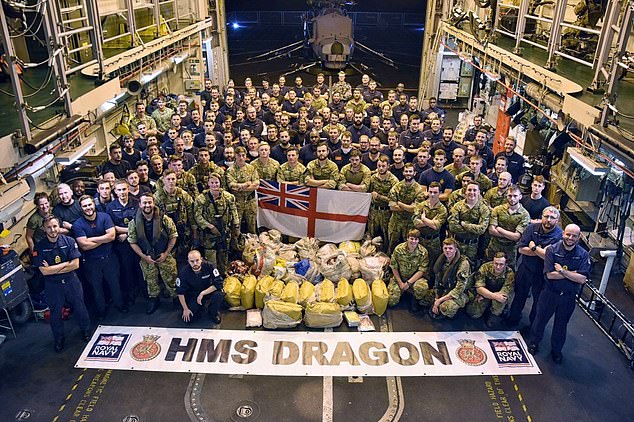 According to the Royal Navy, Lieutenant Johnathan Bennett, who was on watch on the deck the Type 45 destroyer, spotted the dhow away from shipping lanes over the weekend and decided it was suspicious.

The drugs were are worth around £1.6m locally, however, their value would have increased dramatically if they had been smuggled into the UK.

HMS Dragon is operating off the East African coast on anti-terrorist operations as part of the international Combined Taskforce 150.

The operation is designed to disrupt the financing of terror organisations and discourage piracy in the region.

HMS Dragon will be on station over Christmas. 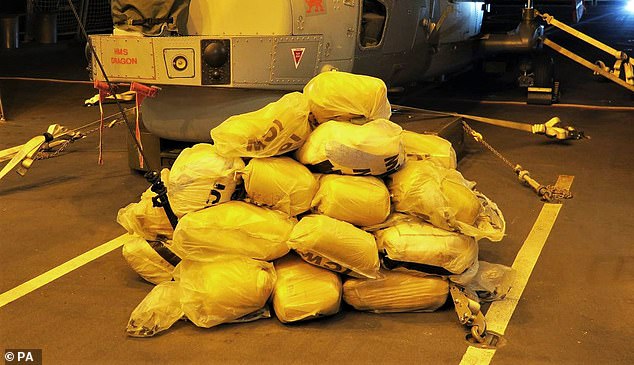 HMS Duncan, pictured, is operating as part of international Combined Taskforce 150 which covers 2.5 million square miles of ocean off the horn of Africa

Lt Bennett said: ‘The dhow looked suspicious so we sent the boarding teams in the sea boats to talk to the crew. Their answers raised our suspicions further, and so we commenced the boarding. Following a search by our trained teams we were able to locate and recover these narcotics, stopping their onward likely travel into Europe and the United Kingdom, as well as disrupting the funding of illicit activity.’

Leading Seamen Adam Parker, one of the ship’s sea boat crew, was responsible for ferrying the boarding team – a mixture of Royal Marines Commandos to provide protection and Royal Navy sailors to carry out the search – across to the dhow. They later transported the haul of drugs, which were later destroyed, back to HMS Dragon.

‘Having started the day preparing for our next port visit, we very quickly had to refocus and support the boarding operations in what became a long, but very rewarding day,’ he said.

‘Conducting sea boat operations over 12 hours places a large demand on our team but from the training received and experience gained whilst deployed we were able to achieve this successfully.’

Commander Michael Carter Quinn, the Commanding Officer of HMS Dragon, said: ‘To achieve this seizure, so swiftly after the last, and alongside having been part of a complex warfighting exercise only a few days ago, is demonstration of the hard work and professionalism of all the Dragons on board.

‘It serves to highlight the breadth of skills available on board HMS Dragon and the rich variety of tasks being delivered by Royal Naval Ships deployed across the globe.’

Defence Secretary Gavin Williamson said: ‘Once again, HMS Dragon has demonstrated the strength, capability and global reach of our Royal Navy. I am incredibly proud of her crew as they confirm the UK’s crucial role in tackling the illegal and destructive global drugs trade.’