Residents in two estates in Melbourne’s south-east say foul smells from a nearby tip are keeping them up at night and making them ill, but authorities have said the gas does not pose a public health risk.

Families in the Brookland Greens and Botanic Ridge estates in Cranbourne have endured rotten-egg-smelling gas leaking from a construction and demolition waste tip on Ballarto Road for months, leaving them unable to open their windows and doors. 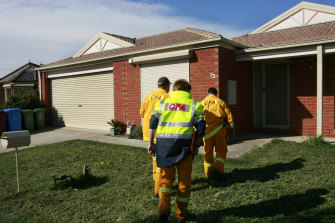 Some have described the stench as a combination of rotten eggs and other gas smells, while others say it is like rotting carcasses and rubbish.

Brookland Greens resident Aliks said the smell had become so bad she had packed up and driven for two hours to her parents’ home with her five-month-old daughter “just to have some fresh air”.

“I’m up during the night to do the night feed, but the smell is actually waking me up before I have to do that,” she told 3AW on Tuesday afternoon. “Outside, it’s horrible, and no matter if you shut all your doors and windows, the smell is still creeping inside.”

Aliks said she had experienced headaches, nausea, a bad taste in her mouth and gagging as a result of the foul smell, which is believed to be caused by hydrogen sulfide emanating from the landfill facility’s treatment ponds.

‘No matter if you shut all your doors and windows, the smell is still creeping inside.’

Neighbour Sarah, who is seven weeks pregnant, said the stench was causing her two-year-old child to cough and gag and her husband’s asthma to flare up.

Her biggest concern was the impact the gas could have on her unborn baby.

“They’re saying what we’re smelling isn’t bad in the short term, but it’s sort of starting to turn into a long-term issue – it’s happening every day,” she said.

Victoria’s Environment Protection Authority said it was first alerted to the odour three to four months ago, but the number of calls had soared in recent days.

The authority believes the smell is caused by rainwater slipping into the facility’s treatment ponds through poorly covered construction and demolition waste, releasing hydrogen sulfide into the air.

The recent cold and still weather could have contributed to the stench by preventing the gas from dispersing in the atmosphere as it normally would.

EPA acting southern metropolitan regional manager Steve Lansdell said the gas could cause coughing and eye irritation but did not pose long-term risks to residents’ health.

“The issue itself has been occurring on and off for months and that’s why there’s a big focus on trying to resolve it as quickly as possible,” he told 3AW. 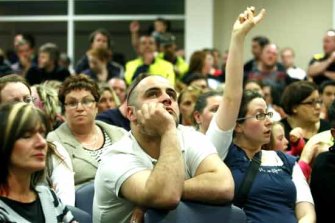 “The impact is often on the colder mornings when the weather’s still … We encourage people to keep their windows closed and try and prevent smelling the odours during those periods.”

Lansdell said tip operator SBI Group had installed a bio filter to manage the smell and changing weather conditions should bring some relief to residents in the coming days.

It is not the first time residents in the Brookland Greens estate area have been exposed to foul-smelling and potentially harmful gases.

More than 450 residents launched a class-action lawsuit against the City of Casey and the EPA in 2008 after a dangerous methane gas leak at a closed municipal tip on Stevensons Road led to the evacuation of hundreds of people. They were awarded more than $23 million in compensation in court in 2011.

Lansdell said the current smell was coming from a different landfill site to the one at the centre of the 2008 incident. It did not take household garbage and other materials that emit methane gas when they break down.

“I really want to assure people it’s very different to issues years ago, and there’s no indication of any long-term impacts from gases like hydrogen sulfide,” he said.

The EPA will meet with residents at Woolworths Cranbourne on Friday to discuss the issue.