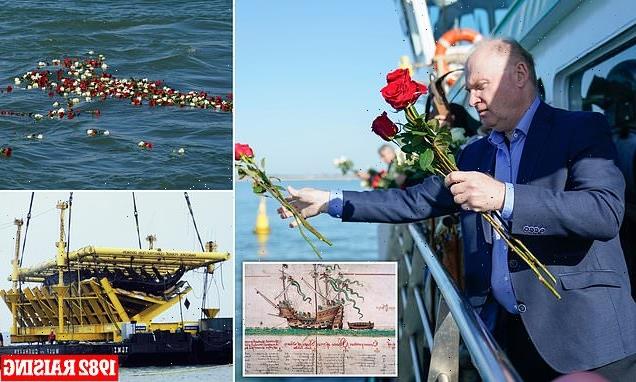 Five hundred roses for the Mary Rose: Flowers are scattered at wreck site of Henry VIII’s flagship that sank in 1545 to mark 40th anniversary of historic moment it was raised from the seabed

Hundreds of roses have been scattered at the wreck site of Henry VIII’s flagship Mary Rose to mark the 40th anniversary of it being raised from the seabed.

The Tudor warship had lain for 437 years on the bed of the Solent outside Portsmouth Harbour after it sank in 1545 while the king watched from Southsea Castle.

It was raised from the Solent, the strait north of the Isle of Wight, on October 11, 1982 after an 11-year salvage operation.

More than 500 divers, including King Charles III as the Prince of Wales, were involved in the world’s largest underwater archaeological excavation in that time, racking up more than 28,000 dives totalling 11.5 man-years on the seabed.

Recovered from the wreck site were more than 19,000 items, and the hull was raised live on television watched by an audience of 60 million worldwide.

To mark the anniversary of the raising on Tuesday, Dominic Jones, chief executive of the Mary Rose Trust, was joined on a small boat by guests and local schoolchildren to scatter 500 roses – representing the number of divers – at the spot where the hull was raised. 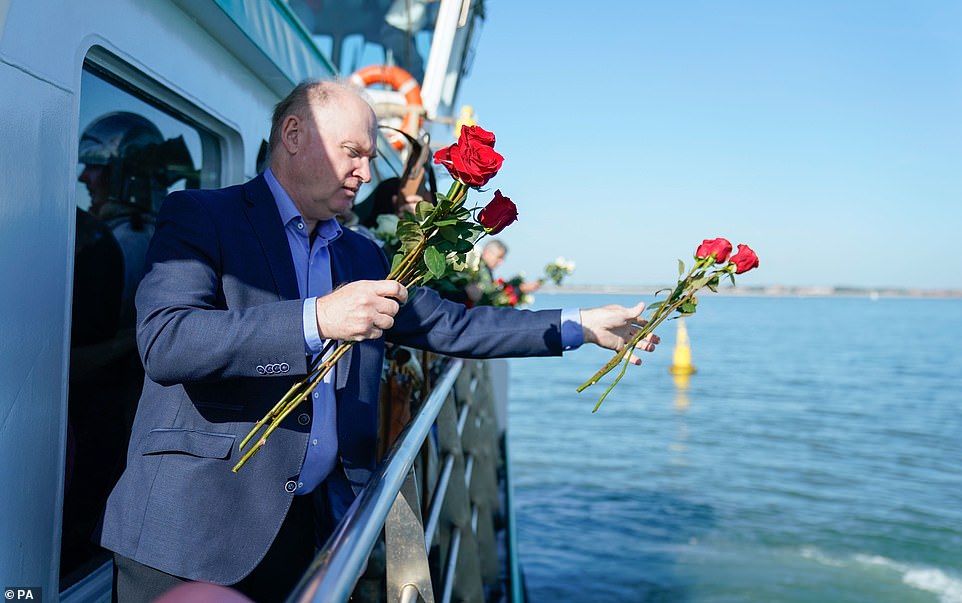 Hundreds of roses have been scattered at the wreck site of Henry VIII’s flagship Mary Rose to mark the 40th anniversary of it being raised from the seabed. Above: Nigel Purse, Chairman of the Mary Rose Trust, joins others to cast 500 roses into the sea 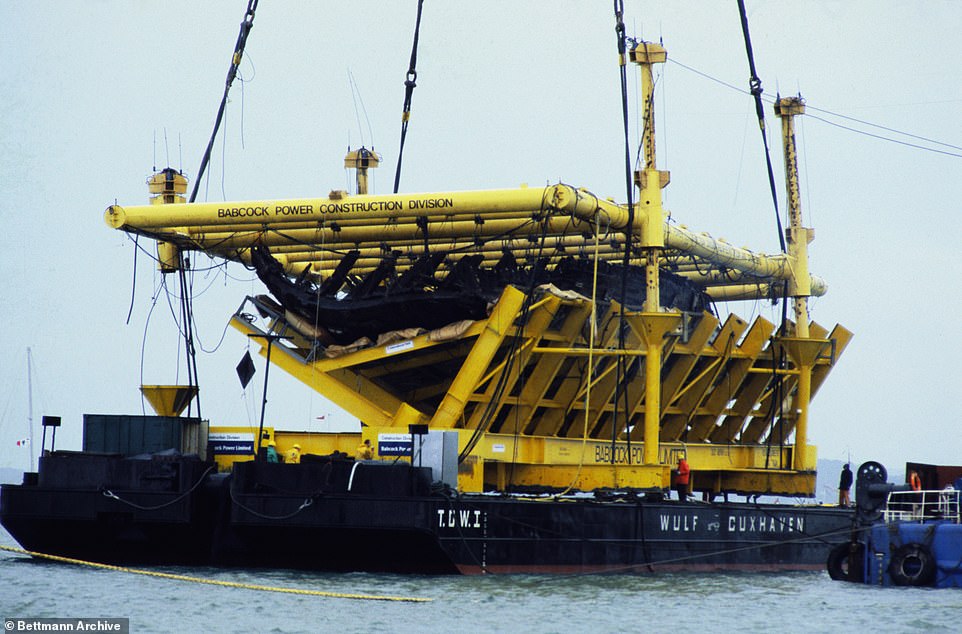 The Tudor warship had lain for 437 years on the bed of the Solent outside Portsmouth Harbour after it sank in 1545 while the king watched from Southsea Castle. More than 500 divers, including King Charles III as the Prince of Wales, were involved in the world’s largest underwater archaeological excavation. Above: The Mary Rose being lifted from the Solent

Mr Jones said: ‘We are beyond proud to be celebrating 40 years since the raising of the Mary Rose.

‘The dedication and effort involved in this world-leading project is truly staggering, and we relish the opportunity to share our story and that of the hundreds of individuals involved with the internationally significant ship.

‘Our work has opened a portal into Tudor life in a way that has never been seen before, and we are honoured to be able to tell the story of the 500 crew, some 465 who tragically lost their lives when the Mary Rose sank.’

The Mary Rose was Henry VIII’s favourite warship and sailed for 34 years before it sank on July 19, 1545 during the Battle of the Solent against the French. The reason behind the sinking is disputed amongst experts.

One theory states that she may have tipped over after being overburdened with men and equipment. Around 500 men lost their lives.

To raise the ship, a purpose-built frame was built and attached to steel bolts that were passed through the hull.

The frame was supported above the ship on four legs and hydraulic jacks then lifted it just a few inches out of the suction effect of the silt in the Solent. 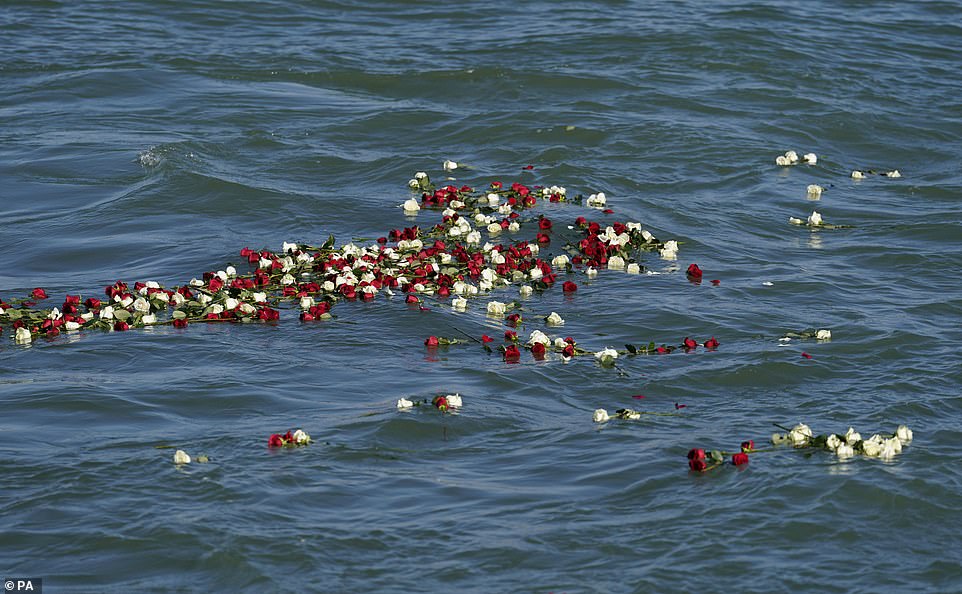 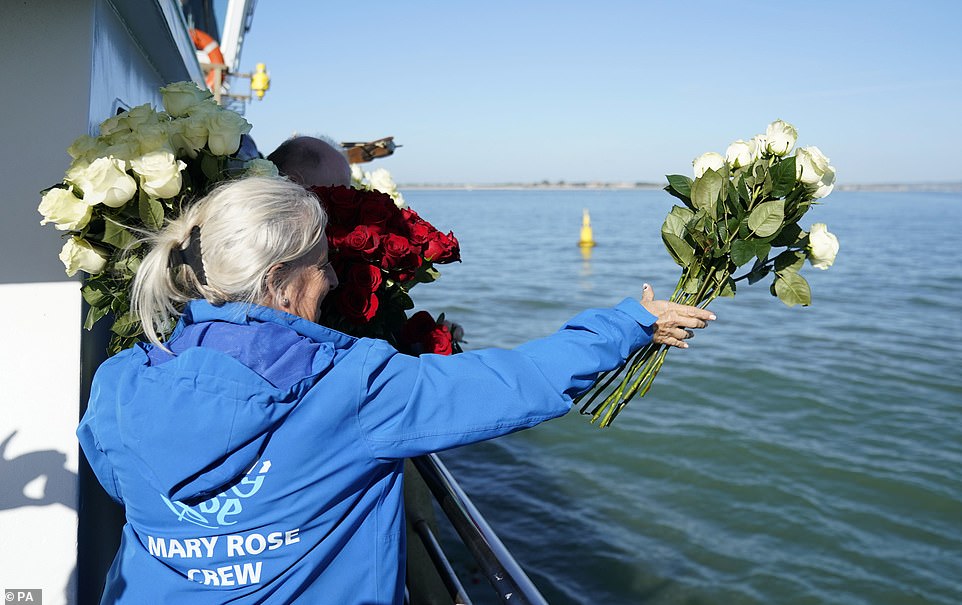 People throw 500 roses into the sea at the site of where the wreck of the Mary Rose was found, to mark the 40th anniversary of the raising of the ship 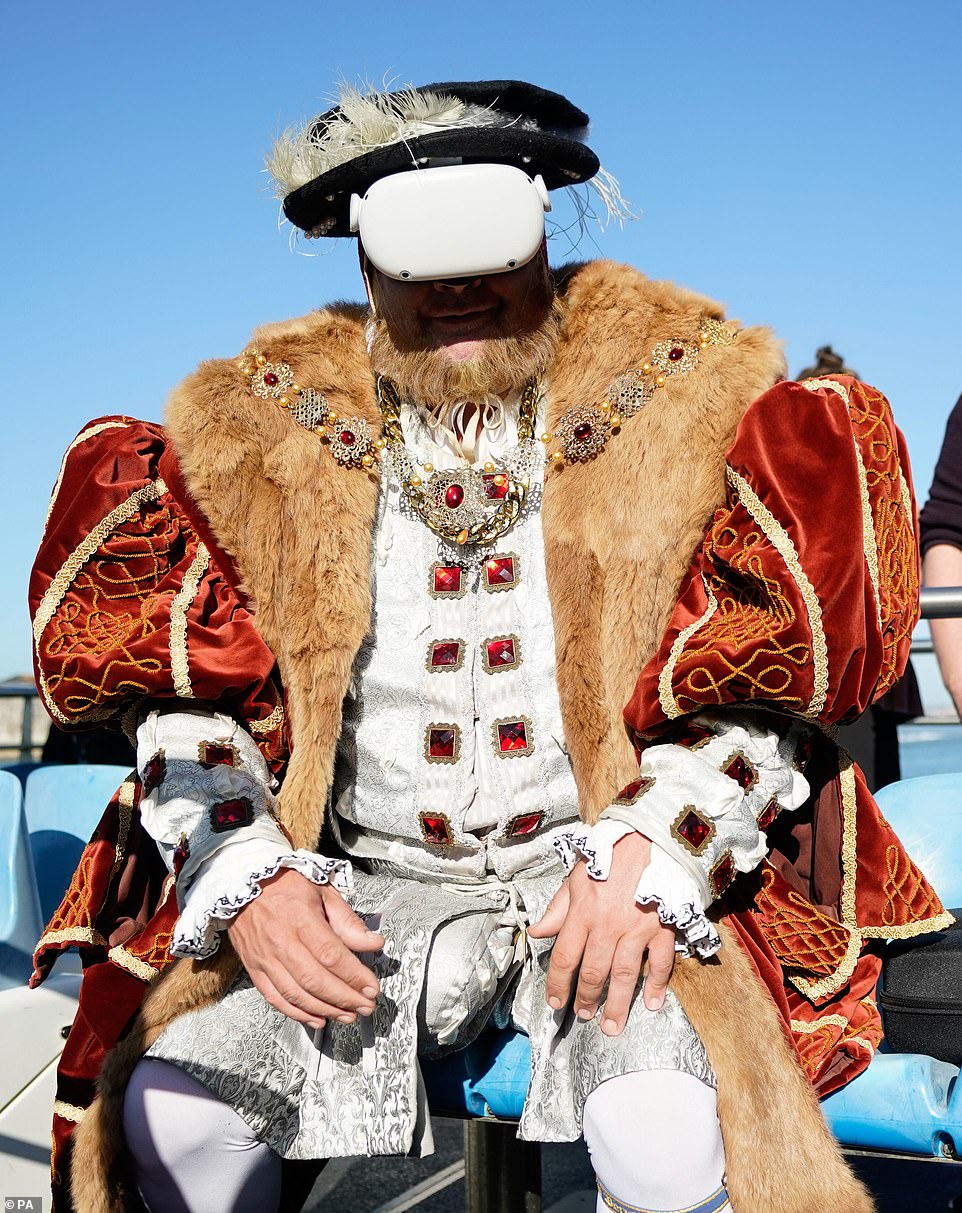 A Henry VIII impersonator wears a virtual reality headset to view a first person, underwater experience of the wreck of the Mary Rose 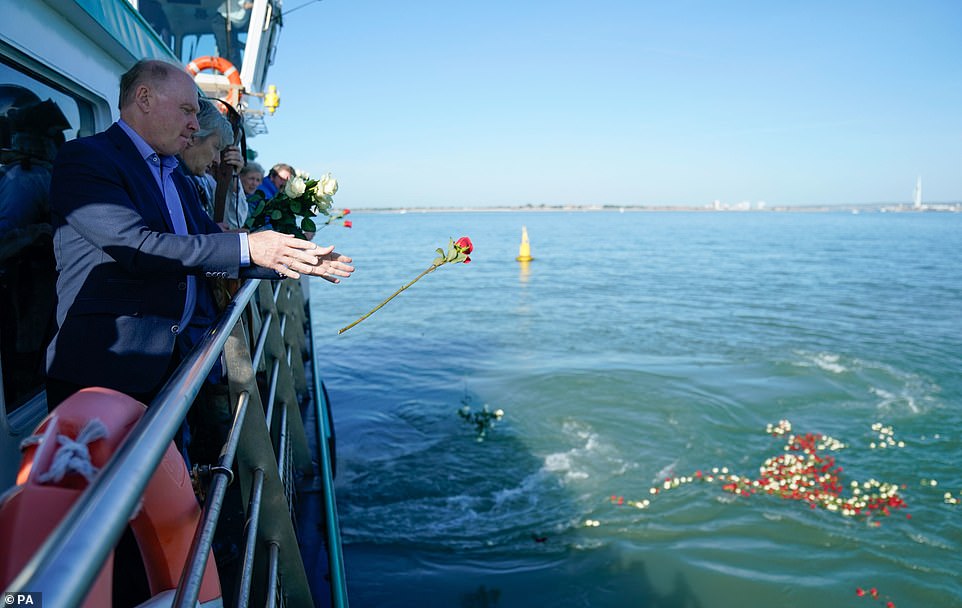 Nigel Purse, Chairman of the Mary Rose Trust, joins others to cast 500 roses into the sea at the spot where the Mary Rose was raised

Once hanging from the frame, the hull was transferred to a steel cradle that was in place on the seabed west of the wreck.

When the weather and tide was favourable, on the morning of October 11, the cradle containing the Mary Rose was raised out of the water by a crane.

The then Prince Charles, who was president of the Mary Rose Trust, was there when the ship was raised.  He had dived several times to see the wreck.

The hull remains the only 16th-century warship on display anywhere in the world in its own dedicated museum at Portsmouth Historic Dockyard.

During its restoration, the ship was coated with millions of litres of finely-sprayed, fresh water at a temperature of less than 5°C (41°F).

The water, along with a series of wax chemicals, were used to stop the wood drying out and to inhibit bacterial activity.

Then, in 1985, the ship was turned upright and titanium props were installed to support the internal structure and work was undertaken to remove as much sediment as possible.

From 1994, active conservation commenced with the spraying of Polyethylene Glycol (Peg), a water-soluble polymer which can penetrate deep into the wood and support the cell walls.

In April 2013, the Peg sprays were turned off and the hull was kept in a state of controlled air-drying.

Once drying was complete, the internal walls surrounding the hull were removed so visitors would be able to see a completely unobstructed view of the hull

The wreck was found in 1971 thanks to the work of historian Alexander McKee.

He led a team that used sonar to first find what they believed to be the Mary Rose, before the discovery of three port frames confirmed it was the right vessel.

A TV documentary released to mark the anniversary of the ship’s raising revealed how King Charles narrowly avoided being injured on live TV when the corner of the frame carrying the ship slipped more than three feet and almost smashed the hull.

The King was on his way to look at the wreck at close quarters when the vessel crashed.

Former Royal Engineer Jack Frost, who was involved in the salvage operation, recalled on Raising The Mary Rose: The Lost Tapes: ‘You know, the future king of England could have died live on TV, which I think would have changed the whole aspect of the recovery, to be honest.

‘Everything went silent. There wasn’t a whisper. No one spoke for what felt like minutes, was probably ten seconds, but just no one moved.

‘And that put paid to Prince Charles getting on her, because it wasn’t going to happen from then.’

Speaking afterwards, Charles said: ‘I will never forget the almighty crash as the chains came down and I thought it was all my fault.

‘The important thing is to be British and not panic. So, we didn’t and all was well. Marvellous.’

The programme also discovered that without the King’s involvement, the £4 million operation would not have gone ahead.

Charles, as patron of the Mary Rose Trust, personally persuaded the multi-millionaire chairman of Howard Doris Engineering and his wife Jocelyn to loan them his floating crane, which cost £25,000 a day at that time to hire.

Ian Dahl, then development director of fundraising at the Mary Rose Trust recalled: ‘We had an event and we very carefully selected who were the core people to be invited that evening.

‘And one of those people just happened to be responsible for the company that owned the ideal crane to raise Mary Rose.

‘The Prince of Wales walked straight over (to him), put his hand out in his wonderful way of relaxing people and said: “Oh, how wonderful. I believe you’ve got the crane for us to raise the Mary Rose.”

‘And the chairman’s wife looked at her husband and said: “Oh, darling, that’s absolutely marvellous.”

‘So basically, he was on the spot and said: “Yes, sir, you know, we would very much like to help.”‘

Dr Ann Coats, British maritime historian at the University of Portsmouth, said: ‘The Mary Rose excavations launched a new era of maritime archaeology: the sheer scale of the diving required hundreds of divers to be trained. 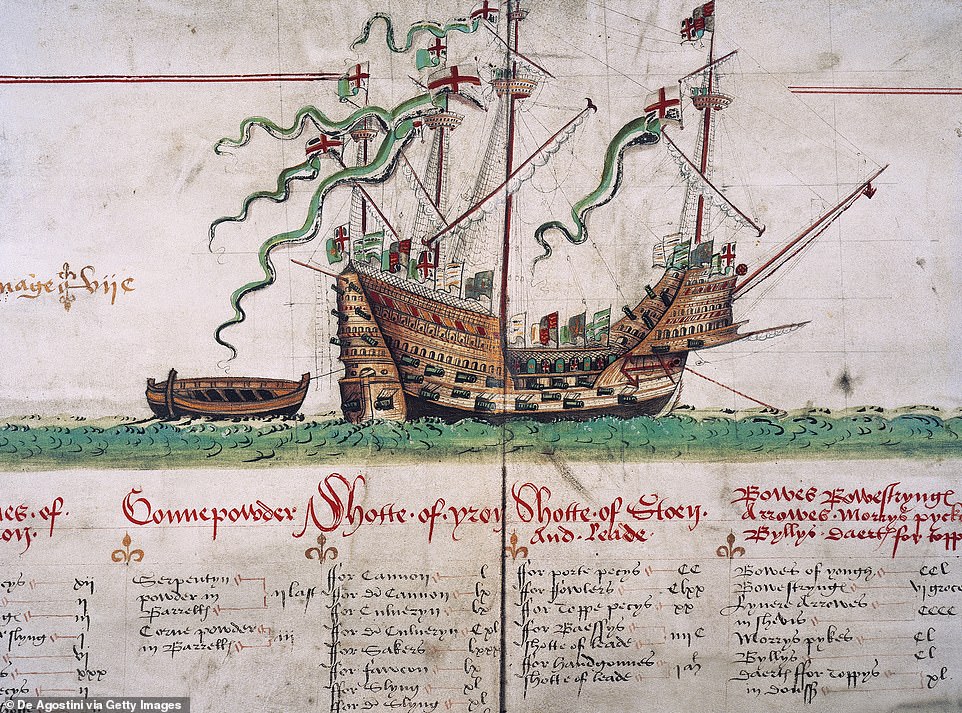 Henry VIII was watching when the Mary Rose (depicted above in a 16th century illustration) sank. It is believed she may have been overburdened with men and equipment 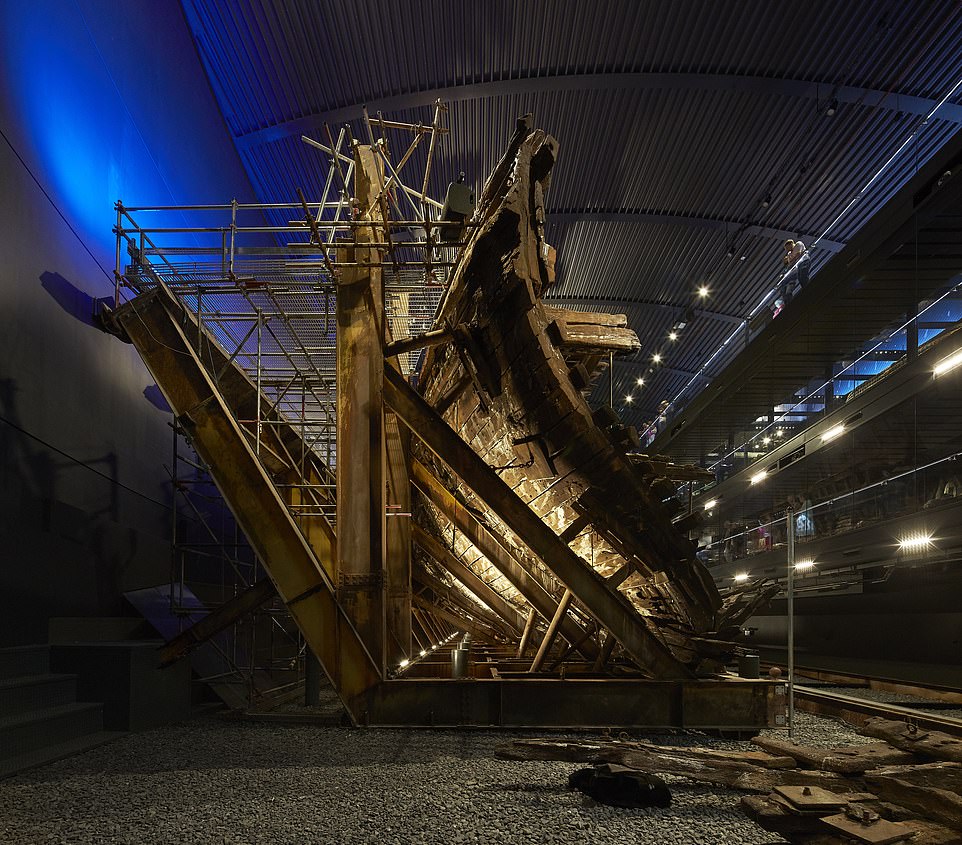 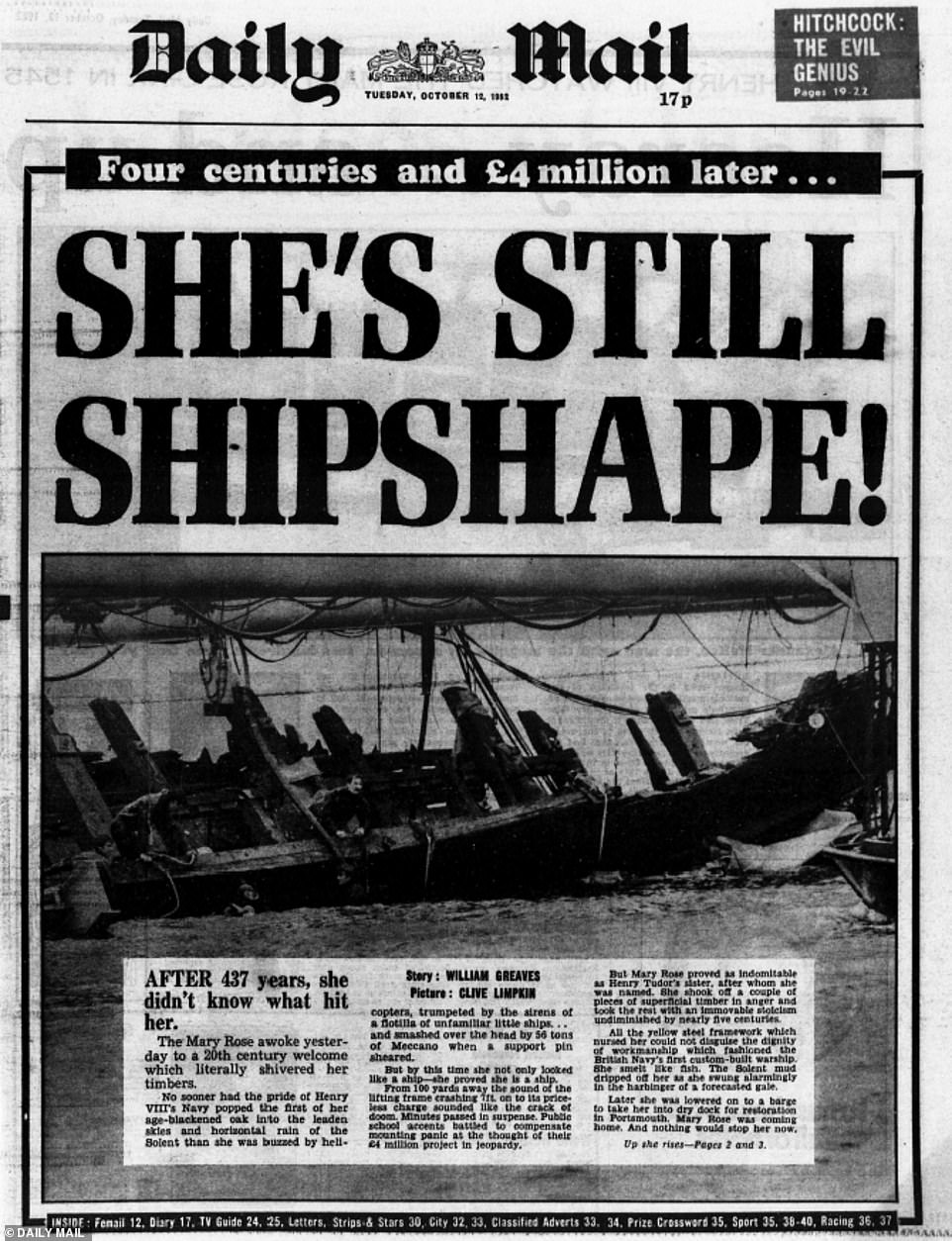 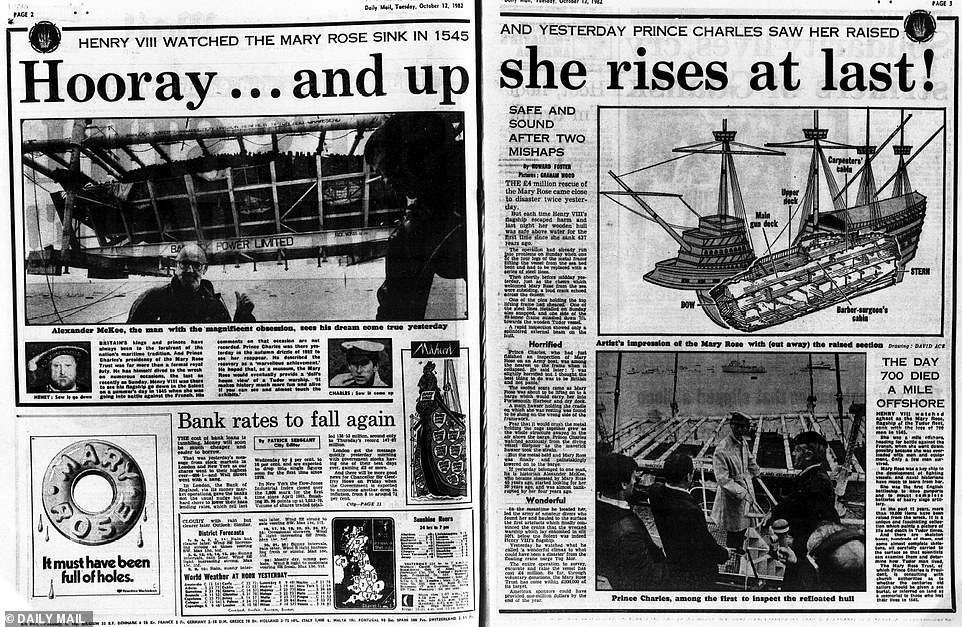 The Daily Mail’s coverage of the raising of the Mary Rose gave intricate detail of the £4million operation that was spurred on by King Charles, who was then the Prince of Wales

‘Computer programmes were adapted to record the 19,000 objects recovered.

‘Today, DNA, 3D printing and other scientific methods are unlocking even more information about the crew and artefacts.

‘Forty years on, many more stories remain to be discovered.

‘Mary Rose’s artefacts themselves gave fresh and amazing insight into Tudor life because organic materials – clothes, musical instruments, foodstuffs, cooking implements, rope, longbows and arrows – which do not normally survive in land sites had survived in abundance and could tell us so much about the lifestyle of ordinary people: seamen.

‘Normally higher status objects have been preserved from wealthy people because of their intrinsic value, but not the everyday items of working life.

‘This fantastic collaborative engineering event in 1982 allowed millions of people to experience the wonder of Mary Rose itself.

‘Divers secured cables under the whole remaining hull so it could be pulled up from the silt and raised.

‘People could now see the scale of the timbers, rope cables, cooking oven, guns, could smell the tarred rope.

‘Individual crew members could be assembled, and their jobs identified, such as the archer.’