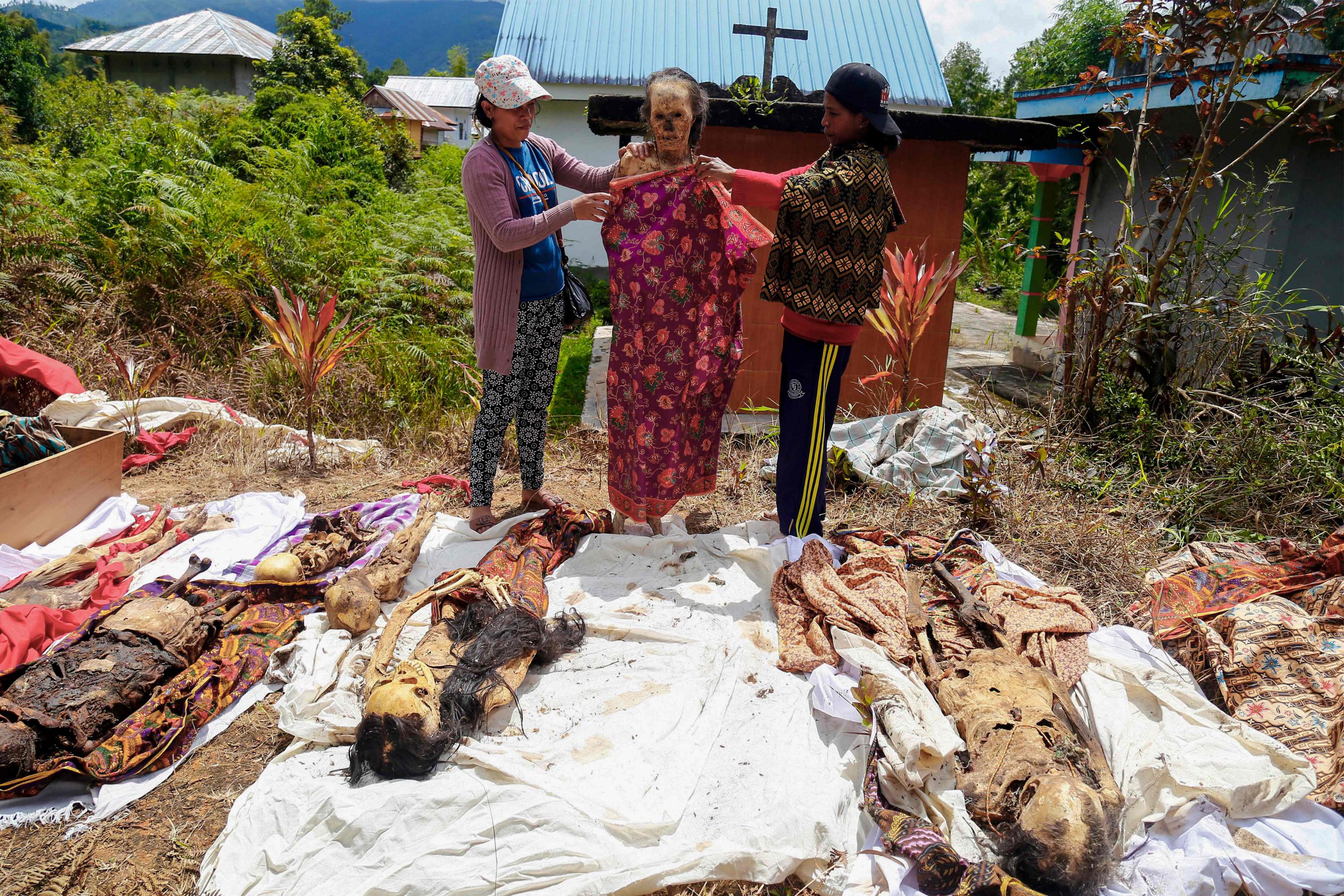 A ceremony has been held which sees families dress up the corpses of their dead relatives – and even pop lit cigarettes into their mouths.

The Toraja people, of Indonesia’s mountainous South Sulawesi region, care for their loved ones long after they die.

They believe the line between life and death is part of a wider journey into the spiritual world.

It can take years for some families save for lavish funerals and until that time, bodies can remain inside homes or in humble graves for months.

People still talk and spend quality time with the corpses during this time and even ‘feed’ them.

The Toraja fear that if their ancestors spirit are unhappy, even in death, it will mean a bad rice harvest in the following year.

As a result, every three years villagers hold the centuries-old Ma’nene, or Manene, ceremony.

It translates to ‘Care of the Ancestors’ and takes place at the end of August.

The dead in the region are preserved in formalin which helps prevent them going through any further decomposing.

During the festival, bodies are dug up and then lovingly dressed up in outfits.

Villagers can then tend to their coffins and repair and replace any broken aspects to the structures.

While the sight of stiff, skeletal bodies being dolled up may seem strange to an outsider, the traditional ceremony allows for the Toraja to show respect to their late loves ones.

Children in the region learn from a very young age to deal with death and to accept it as part of a wider spiritual journey.

Villagers will even proudly pose for family photos with the corpses they dress for Ma’nene.

It is not uncommon for the preserved corpses to be invited to lunch of share a cigarette with their surviving family members.

The unique tradition has survived for centuries, despite the increasing modernisation of the world.

In 2017, photographer Claudio Sieber released a series of photos to give the world an insight into the ancient tradition.

Despite his initial reservations, he soon got used to the sights of the dead bodies.

‘I became very comfortable with the situation after maybe two or three days.’

‘I changed my perspective about it because for them it’s life that goes beyond death. It’s not a sad moment.’

Any fears about imposing on the Ma’Nene festival were quashed after he came to realise just how open the Torajan people are.

He met a man called Noel, who was hosting a funeral for his grandparents that would have nearly 1000 guests who told him, ‘For us Torajans it’s an honour to welcome a foreign guest at the ceremony’

‘Especially because a Bule – Westerner – contributes well to the prestige of a family.’