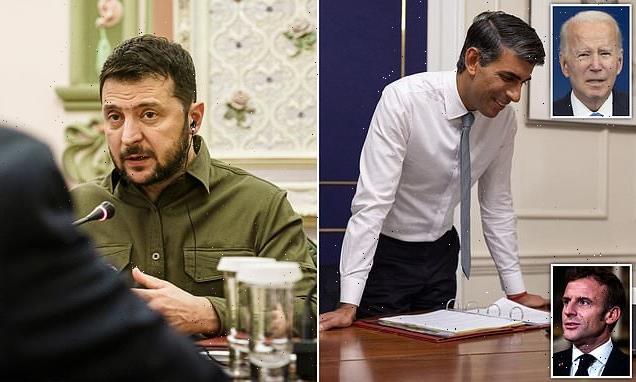 Rishi Sunak stepped up to the international stage last night taking calls from world leaders as he laid down the foundations for his premiership.

The new PM had earlier hit headlines with a dramatic cabinet reshuffle that saw him displace key Truss allies while retaining Jeremy Hunt as Chancellor and James Cleverly as Foreign Secretary and reappointing Suella Braverman to the Home Office.

Hours after his cabinet reshuffle, Mr Sunak took a call from US president Joe Biden and discussed the war in Ukraine, as the US President called the UK his country’s ‘closest ally’.

The new Prime Minister will meet Joe Biden in the coming weeks at the G20 summit in Indonesia.

Sunak reiterated the special relationship between the UK and US by referring to the two countries ‘the closest of allies’ in an Instagram post, alongside a picture of himself taking the call.

The PM also spoke with Ukrainian President Volodymyr Zelensky and pledged the UK would continue to provide support as it defends itself from Russian aggression.

But not all reactions were quite as welcoming, as Russia acknowledged the new Prime Minister in the frostiest of terms.

Kremlin spokesman Dmitry Peskov said that in Moscow, ‘we do not see any preconditions, grounds, or hope that in the foreseeable future there will be any positive changes’ in the relationship between the United Kingdom and Russia. 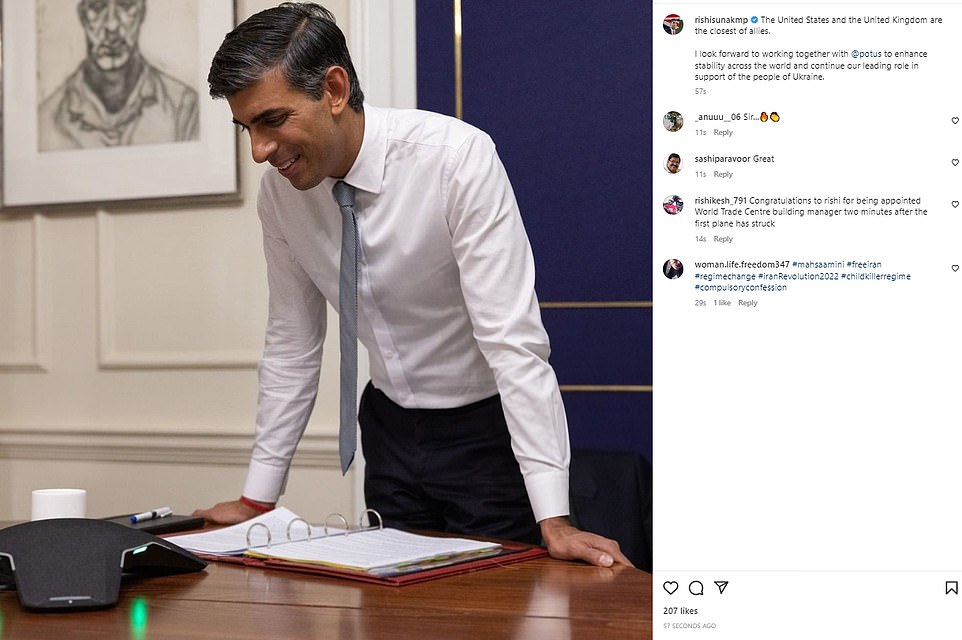 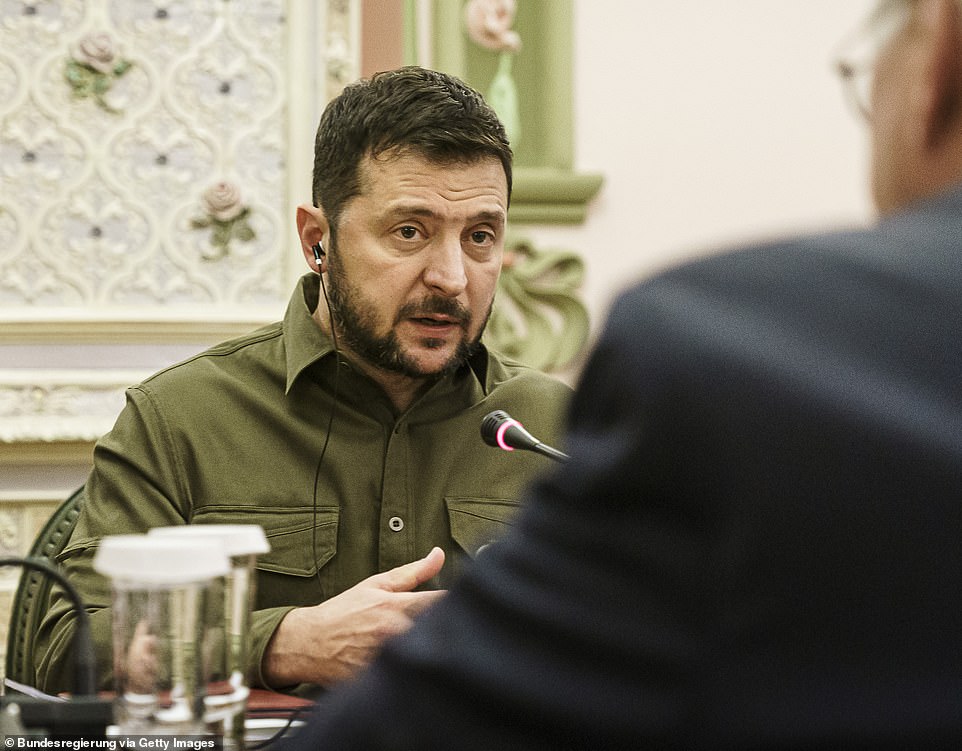 A Downing Street spokesperson said that Mr Biden congratulated Mr Sunak on his appointment, adding that ‘the leaders looked forward to working closely together’.

Both of Sunak’s predecessors Boris Johnson and Liz Truss had vocally promised full support to war-torn Ukraine and on Tuesday evening the new Prime Minister said the UK’s support would be as ‘strong as ever’ under his leadership.

Calling it a ‘privilege’ to speak to Mr Zelensky, who had earlier sent him congratulations, Mr Sunak tweeted: ‘Both he and the Ukrainian people can count on the UK’s continued solidarity and support.

‘We will always stand with Ukraine.’

Mr Zelensky, in a tweet, called it an ‘excellent conversation’ with the pair agreeing to ‘write a new chapter’ in relations between the two countries.

Speaking outside Number 10 on Tuesday, the new Prime Minister referenced Russia’s invasion of Ukraine twice, saying: ‘Putin’s war in Ukraine has destabilised energy markets and supply chains the world over.’ 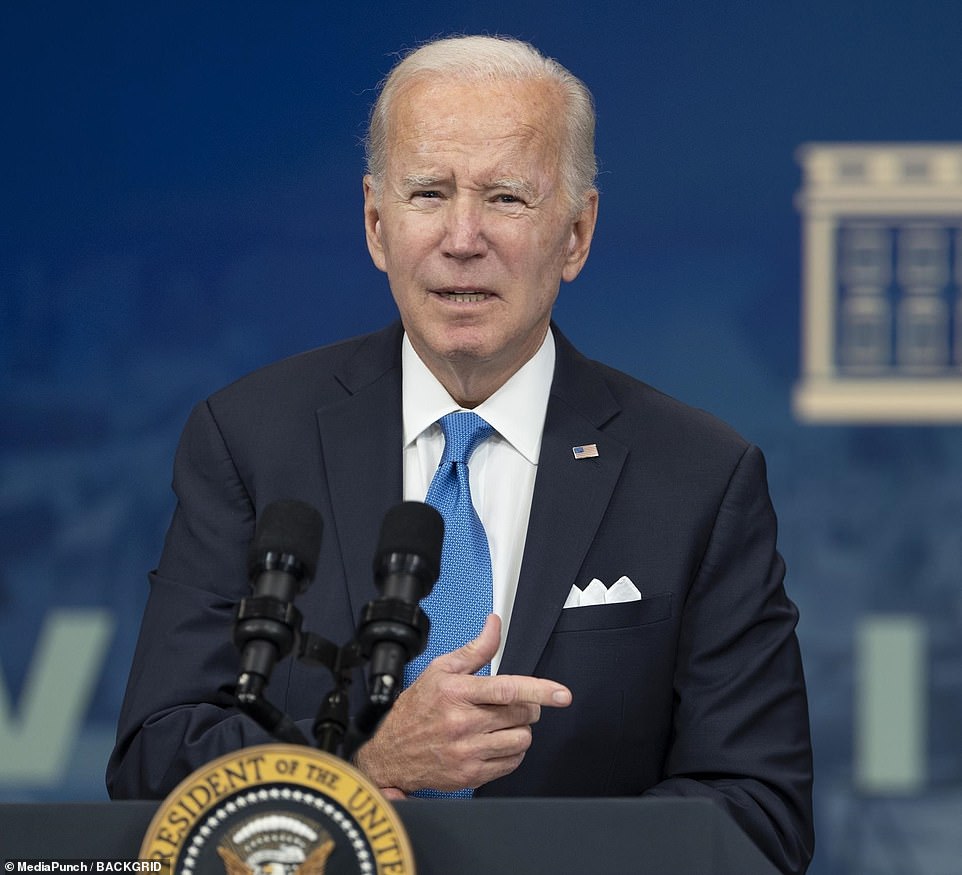 ‘President Biden said that the UK remains America’s closest ally, and the Prime Minister agreed on the huge strength of the relationship,’ said a Downing Street spokesman 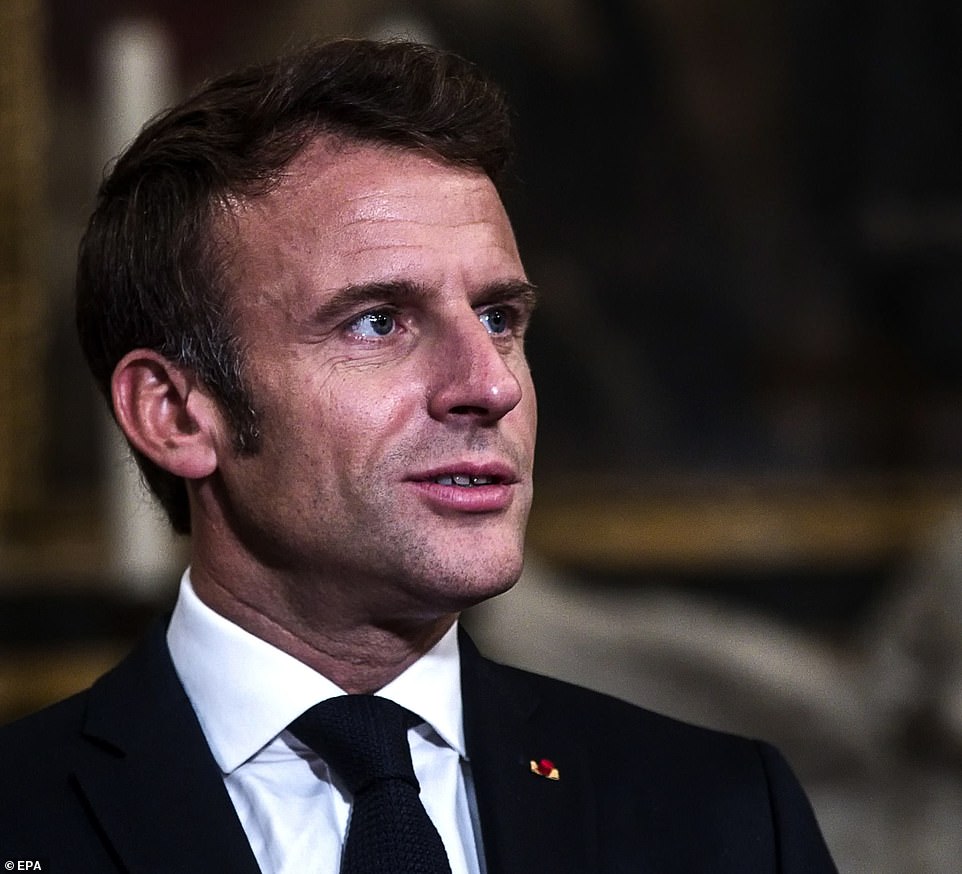 In his congratulatory message to Mr Sunak, French President Emmanuel Macron said the UK and France will work together to tackle the challenge of the war in Ukraine.

In recent days, Biden appeared to publicly criticise short-lived PM Liz Truss’s doomed economic strategy, in a rare intervention by the US President.

Relations between the two countries have also been somewhat strained in recent years amid ongoing UK-EU tensions over post-Brexit arrangements in Northern Ireland, with White House concerns over the impact on peace in the region.

The issue appears to have come up in the call, according to details released by Downing Street, as well as the war in Ukraine and the rising power of China.

President Zelensky congratulated the Prime Minister on his appointment and wished him a happy Diwali. The Prime Minister thanked him and said he hoped they would see each other in person soon.’

In his congratulatory message to Mr Sunak earlier, French President Emmanuel Macron also said the two countries would work together to tackle the challenge of the war in Ukraine.

Ms Truss was widely criticised after she declined to say whether Mr Macron was a ‘friend or foe’ when asked during the previous Tory leadership contest.

Mr Macron later suggested it was a ‘problem’ if Britain could not call itself a friend of France. 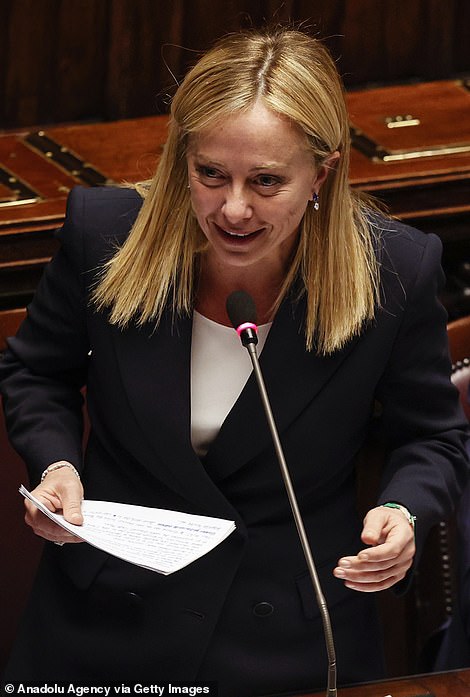 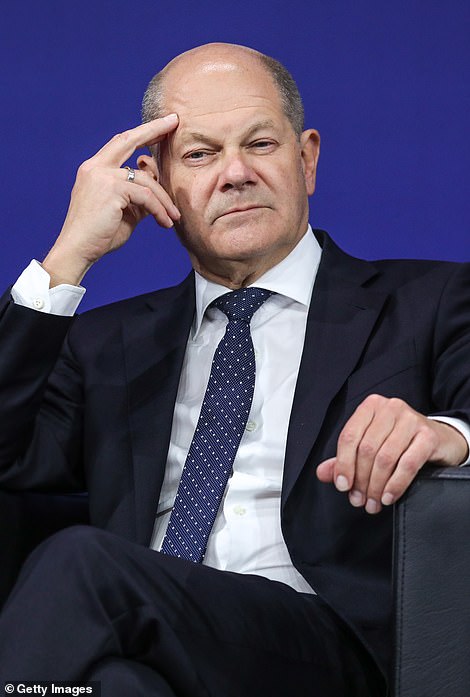 From Italy, newly-installed Prime Minister Giorgia Meloni (left) said that she was ‘eager to cooperate with Mr Sunak’; while German Chancellor Olaf Scholz (right) tweeted: ‘I look forward to our further cooperation and partnership in NATO and the G7 as close friends’ Nigerian President Muhammadu Buhari (left) said that with Sunak ‘as the first Prime Minister of British-Asian descent and the youngest in about 200 years, these milestones will be especially inspiring for young people’; while Indian Prime Minister Narendra Modi (right) did not wait for Sunak to be officially appointed, sending congratulations via Twitter on Monday

A Downing Street spokesperson said: ‘President Biden congratulated the Prime Minister on his appointment and the leaders looked forward to working closely together.

‘President Biden said that the UK remains America’s closest ally, and the Prime Minister agreed on the huge strength of the relationship.

‘The leaders discussed the extent of UK-US cooperation, both bilaterally and in regions such as the Indo-Pacific where the AUKUS pact forms part of our efforts to enhance stability and counter China’s malign influence.

‘They reflected on the leading role our countries are playing in supporting the people of Ukraine and ensuring Putin fails in this war.

‘The Prime Minister and President Biden also agreed on the need to ensure the people of Northern Ireland have security and prosperity through preserving the Belfast (Good Friday) Agreement.

‘The leaders looked forward to meeting in person at the upcoming G20 Summit in Indonesia.’

The spokesperson added that Sunak’s call with Zelensky had been ‘to underline the United Kingdom’s steadfast support for Ukraine’.

‘The Prime Minister said the United Kingdom’s support for Ukraine would be as strong as ever under his premiership, and President Zelensky could count on his Government to stand in continued solidarity.

‘The Prime Minister also noted the importance of the International Atomic Energy Agency’s work in Ukraine to ensure nuclear safety and provide transparency around any disinformation.

‘Both leaders agreed on the need to continue to place pressure on Putin’s barbaric regime through continued economic sanctions.’

Ms Truss eventually hailed the French President as a friend when the pair met at the first summit of the European Political Community in Prague.

In his message to Mr Sunak, Mr Macron tweeted: ‘Congratulations to Rishi Sunak, who has become Prime Minister of the United Kingdom.

‘Together we will continue working to tackle the challenges of the moment, including the war in Ukraine and its many consequences for Europe and the world.’

The new PM received a host of congratulations from other world leaders during his first day in office.

From Italy, newly-installed Prime Minister Giorgia Meloni said that she was ‘eager to cooperate with (Sunak) and his cabinet on the common challenges, standing for our shared values of freedom and democracy.’

‘I look forward to our further cooperation and partnership in NATO and (the) G7 as close friends,’ German Chancellor Olaf Scholz tweeted.

Maros Sefcovic, the European Union’s point man on post-Brexit ties with Britain, said that ‘a positive EU-UK relationship is of strategic importance’.

He vowed to work towards ‘a partnership in full respect of our agreements’ – including the contentious issue of British province Northern Ireland’s land border with EU-member Ireland.

European Commission chief Ursula von der Leyen said that ‘in these testing times for our continent, we count on a strong relationship with the UK to defend our common values’.

Nigerian President Muhammadu Buhari said that with Sunak ‘as the first Prime Minister of British-Asian descent and the youngest in about 200 years, these milestones will be especially inspiring for young people’ in the Commonwealth, the association mostly of former British colonies.

‘We seek to deepen our partnership with Britain’ to address challenges including terrorism, food insecurity, energy and climate change, Buhari added.

Indian Prime Minister Narendra Modi did not wait for Sunak to be officially appointed, sending congratulations via Twitter on Monday.

‘As you become UK PM, I look forward to working closely together on global issues,’ Modi wrote.

‘Special Diwali wishes to the ‘living bridge’ of UK Indians, as we transform our historic ties into a modern partnership,’ he added.

Sunak is married to an Indian, Akshata Murty, the daughter of the co-founder of IT giant Infosys.