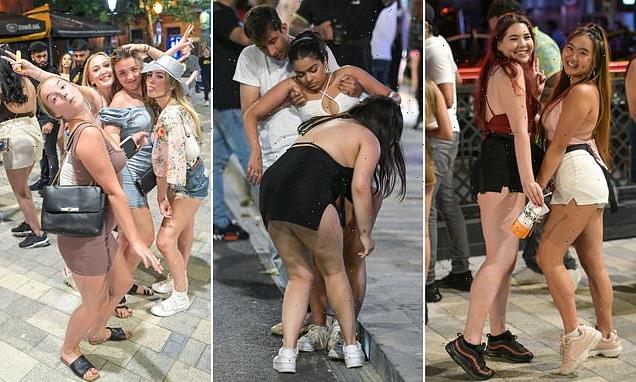 We just want to party! Revellers enjoy it while they can as they pack out nightclubs and venues across the UK amid fears Covid passports could soon halt their nights out

Thousands of revellers have been pictured enjoying the first club nights since ‘Freedom Day’ as fears persist that vaccine passports and the ‘pingdemic’ could cripple the industry once again.

In major cities with popular nightlife scenes, from London to Liverpool to Leeds, tens of thousands of young people will descend on packed – and sold out – events on Friday night and throughout the weekend.

Approximately 100,000 punters are expected to let their hair down across the country as partygoers dance the night away without major Covid restrictions for the first time in 16 months.

Pictures from Friday morning showed revellers queuing for hours to get into the popular nightclubs and bars in Birmingham’s famous Broad Street.

And with fears growing of a staffing crisis in pubs, clubs and bars, sparked by the record-breaking number of alerts sent to workers thanks to the ‘pingdemic’, hospitality staff will not be exempt from self-isolation rules despite major concerns from industry leaders. 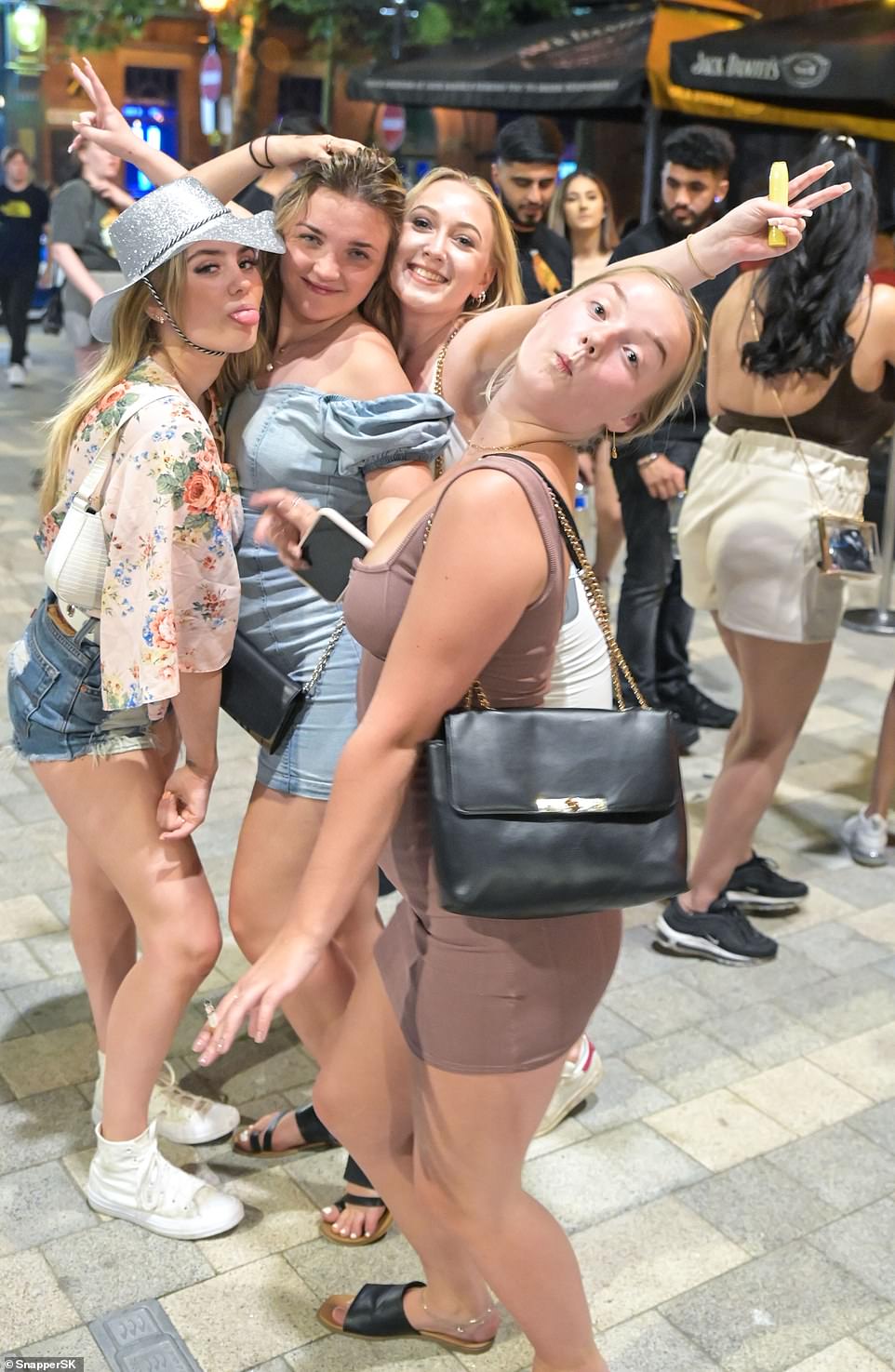 Four young girls pose for a picture as they prepare for a big Thursday night out in Broad Street, Birmingham 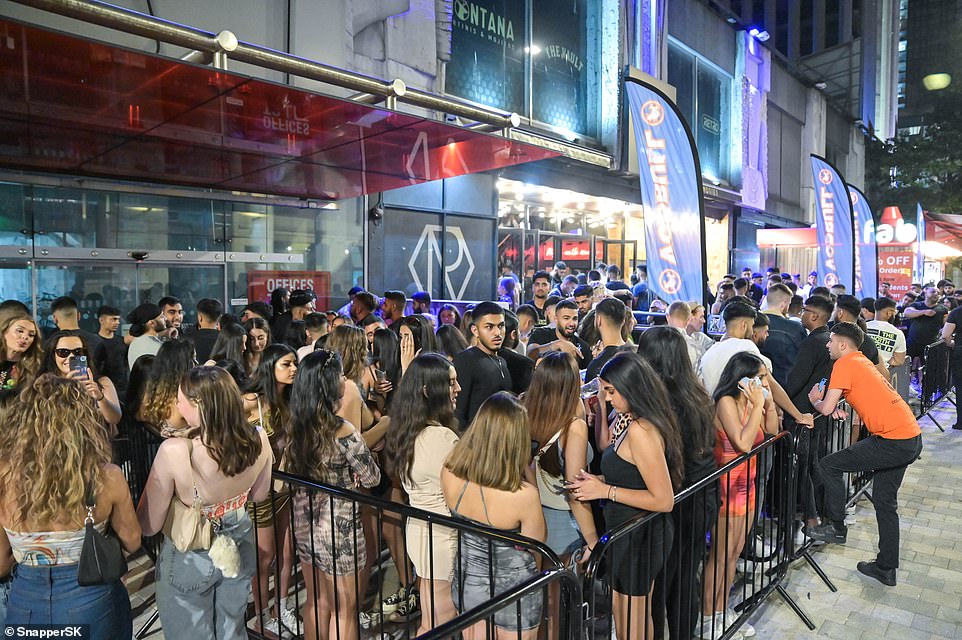 Venues are gearing up to host thousands inside packed – and largely sold out – clubs, pubs and bars across the nation throughout the week after most legal restrictions on contact were eased on ‘Freedom Day’.

Several club nights advertised the long-awaited return of freedoms, such as face coverings no longer being required and social distancing measures shelved – with many setting lofty targets of pulling in more than 1,000 patrons a night.

On popular online ticket selling platforms such as Fatsoma and Eventbrite, there are over 200 clubbing events lined up in big party cities across the UK, including London, Birmingham, Manchester and Leeds.

Partygoers can expect a big night out every day this week, with event planners desperately organising over 200 events in major party cities in the UK – as they hope to pile in as many punters as possible to make up for lost revenue over the last 16 months.

Using numbers shared on ticket sales websites, there could be close to 70,000 revellers enjoying club nights in major party hubs across the UK if the venues operate at full capacity and can attract punters in droves.

But, fears persist over the lingering threat of Covid passports and potential impact of the so-called ‘pingdemic’ – with more than 1.7m people understood to be self-isolating at present. 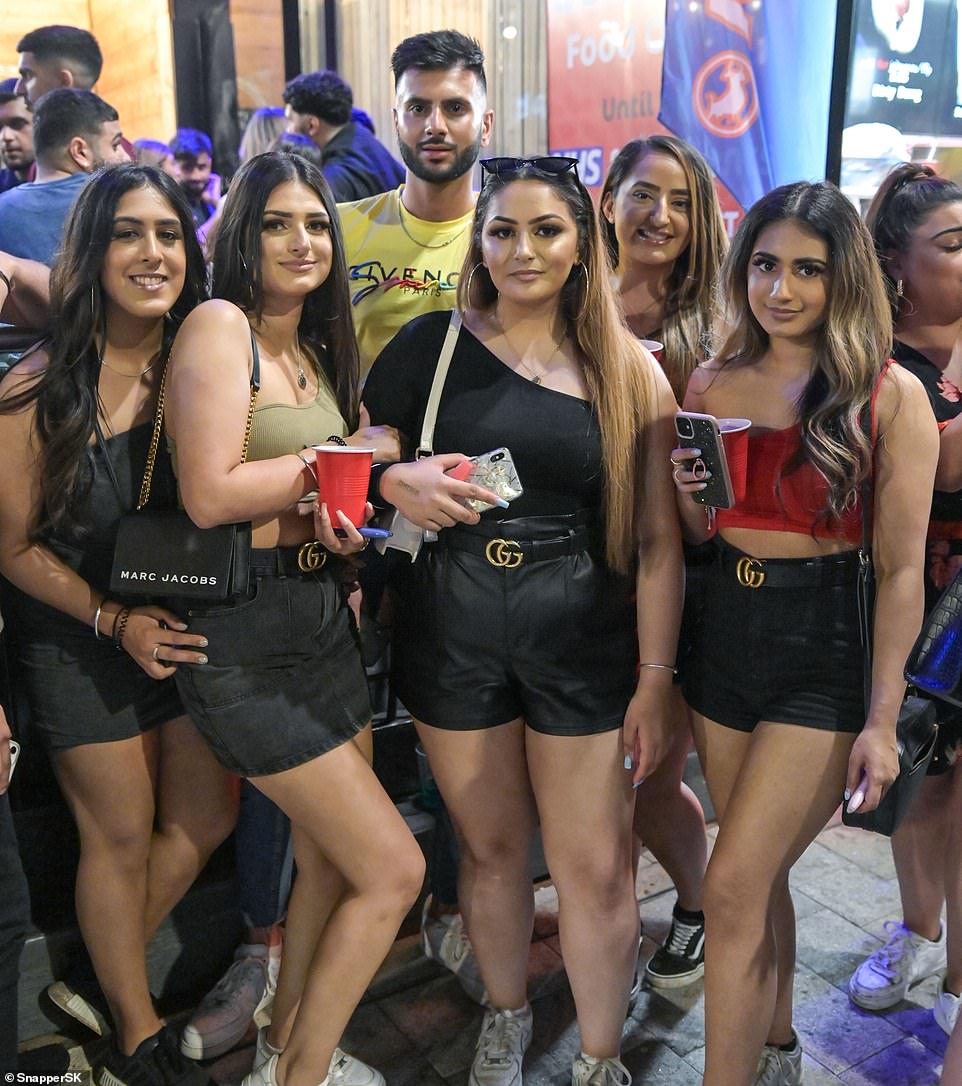 With terms having now wrapped up, and graduation celebrations on the way, thousands of students will be marking the end of their time at university with a celebratory blow out. Pictured: A group of clubbers in Birmingham 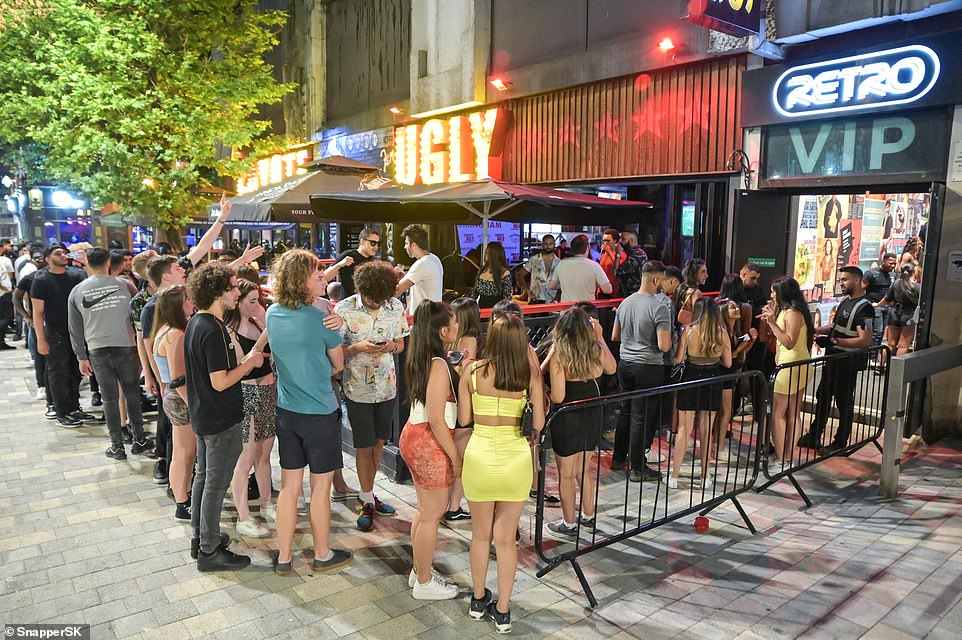 Venues are gearing up to host thousands inside packed – and largely sold out – clubs, pubs and bars across the nation throughout the week after most legal restrictions on contact were eased on ‘Freedom Day’ 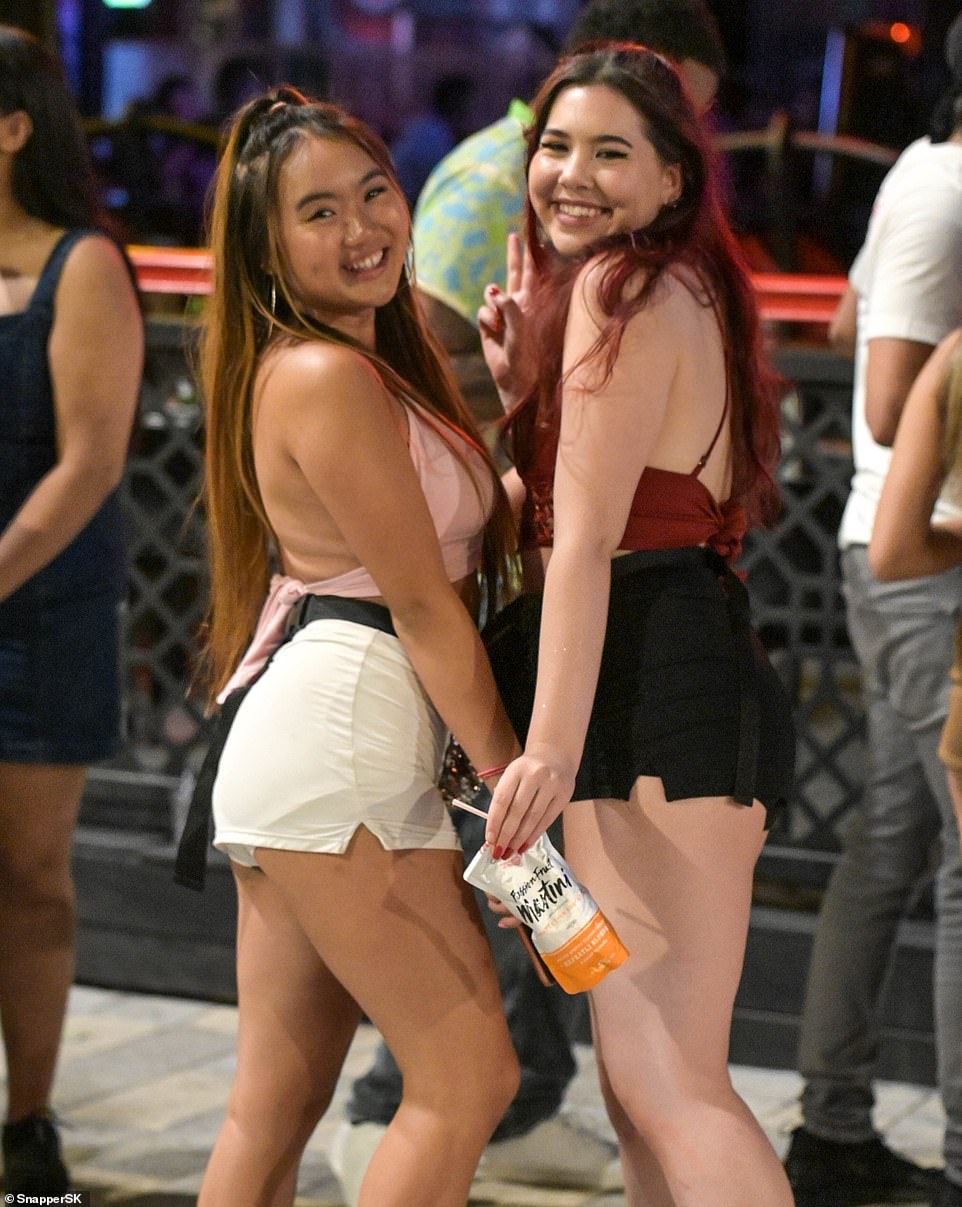 Pret a Manger, Nando’s, Greggs and McDonald’s are all suffering extra staffing problems caused by the NHS self-isolation policies.

Sandwich chain Pret has shut 17 outlets, Greggs is shuffling staff between some sites to keep them open and Nando’s has closed at least one restaurant.

McDonald’s is cutting hours and services across large parts of the country, such as removing eat in and takeaways in favour of drive-thru only.

The problem has been exacerbated by a wider staffing crisis across the hospitality sector which is causing problems for national pub chains and the likes of Burger King and KFC.

All are struggling to fill rotas as thousands of workers have been ordered to self-isolate for up to ten days after being pinged by the NHS Covid app or contacted by the Test and Trace service.

The PM has also refused to rule out the possibility of people having to provide proof of their vaccination status in pubs and bars, as he faces a potential internal party revolt over the move.

Asked whether pubs could also be caught by the requirement, a No10 spokesman said: ‘The Prime Minister talked about the sort of areas we were considering, and nightclubs are where there is significant evidence we have at the moment.

‘But we’re going to use the coming weeks to look at the evidence, particularly both in the UK and globally before making a specific decision.’

Tory MP Charles Walker declared he will vote against the plan if it comes to the Commons after the summer recess. ‘It will start with nightclubs and then quickly move on to other parts of the hospitality sector,’ he told BBC Radio 4’s World at One earlier this week. 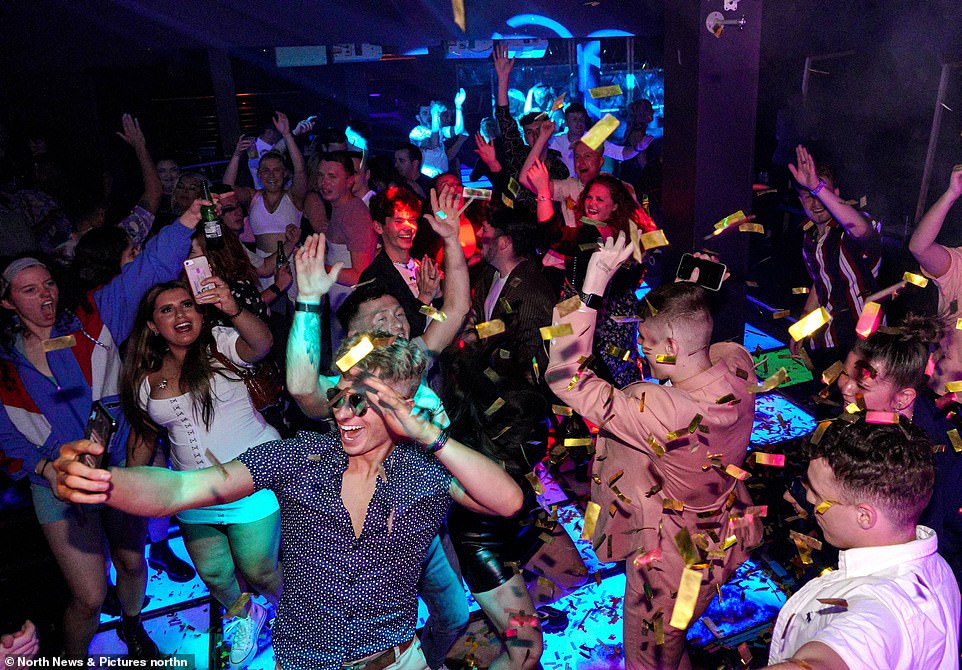 Boris Johnson laid down a warning to younger generations, making clear that they will need to prove they have been vaccinated to enter nightclubs and other venues from September. Pictured: Clubbers return to Astoria in Portsmouth 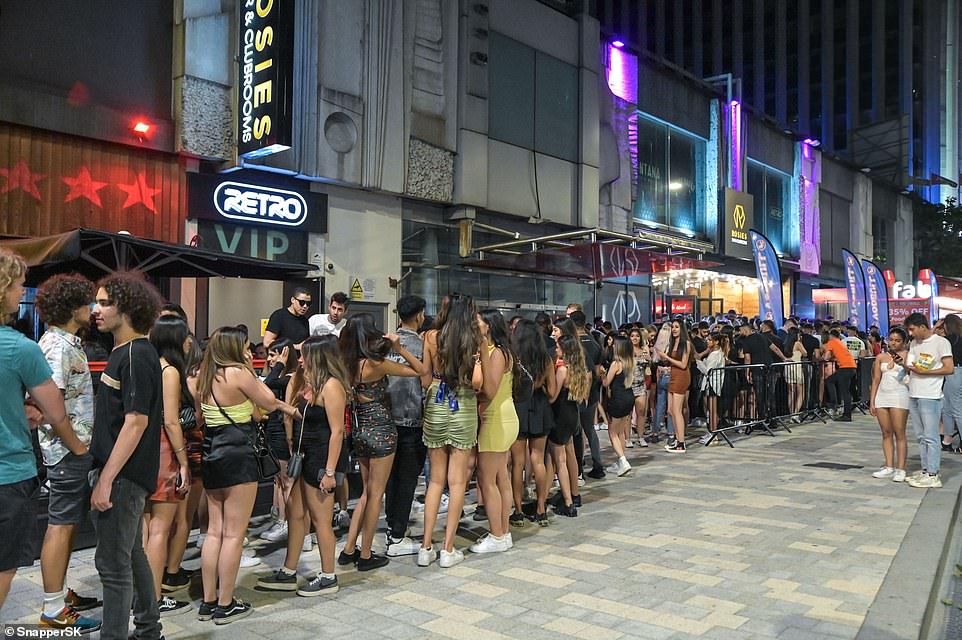 On popular online ticket selling sites such as Fatsoma and Eventbrite, there are over 200 clubbing events lined up in big party cities across the UK, including London, Birmingham, Manchester and Leeds. Above: Clubbers queue for hours in Birmingham 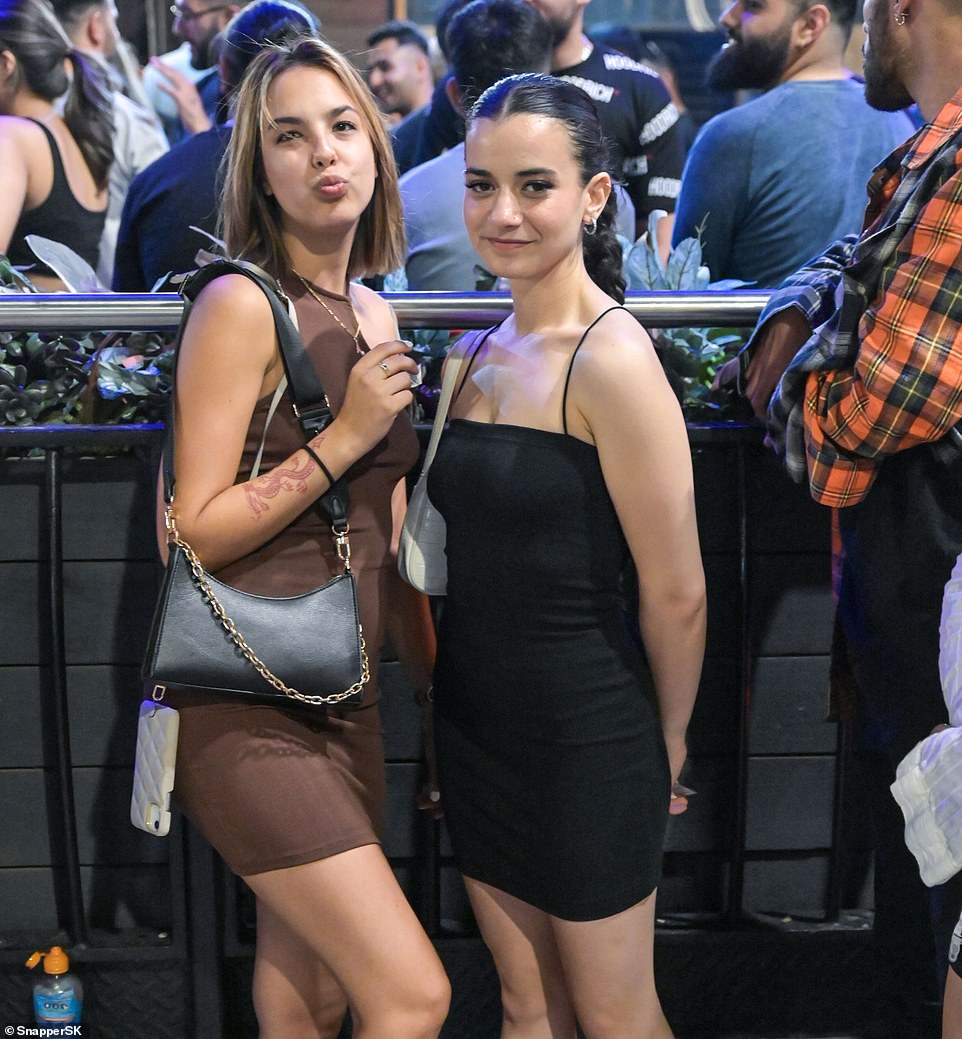 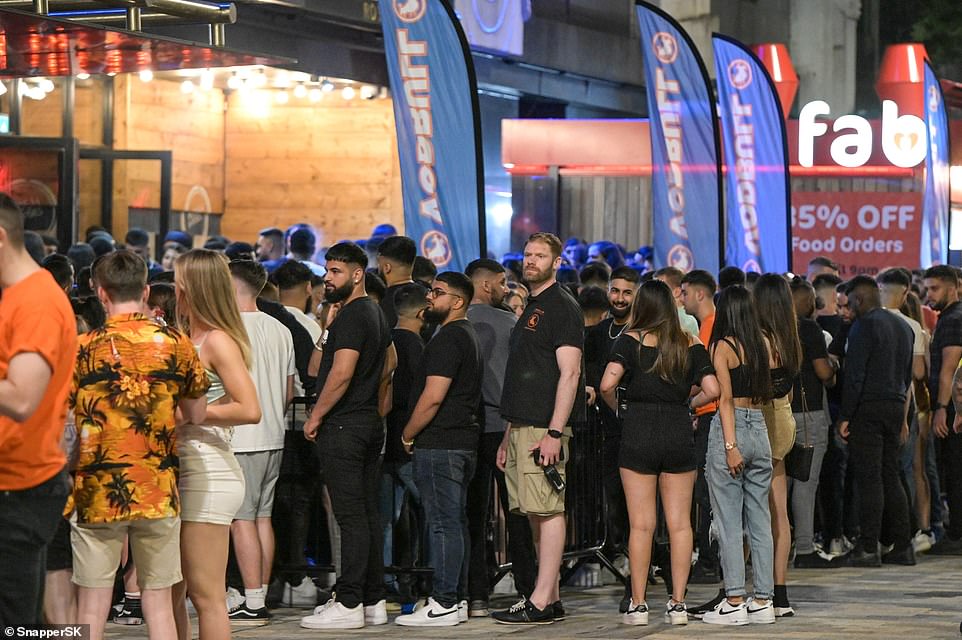 Michael Kill, chief executive of the Night Time Industries Association, said: ‘So, ‘Freedom Day’ for nightclubs lasted around 17 hours then.

‘The announcement from the Prime Minister that Covid passports will be made mandatory for night clubs in September comes after his Health Secretary said only one week ago that they would not be compulsory. What an absolute shambles.

‘Leaving aside the fact that this is yet another chaotic U-turn that will leave night clubs who have been planning for reopening for months having to make more changes to the way they operate – this is still a bad idea.

‘Eighty per cent of nightclubs have said they do not want to implement Covid passports, worrying about difficulties with enforcing the system and a reduction in spontaneous consumers, as well as being put at a competitive disadvantage with pubs and bars that aren’t subject to the same restrictions and yet provide similar environments.’

Speaking just hours after the venues were allowed to reopen for the first time in 16 months on ‘Freedom Day’, Mr Johnson declined to rule out extending the scheme to other hospitality venues, including pubs.

Night-time economy bosses have reacted angrily to the plans, calling the move ‘yet another chaotic U-turn’ and a ‘bad idea’, with eight in 10 nightclubs warning they do not want to implement vaccine passports amid concerns the requirement will damage their trade even further.

The Government appears likely to face opposition in Parliament over the proposals, with Mark Harper, the Tory former chief whip who chairs the Covid Recovery Group of Tory lockdown-sceptics, criticising the plans as ‘effectively moving to compulsory vaccination’.

Former Supreme Court justice Lord Sumption said the move was ‘completely unnecessary’ given the high rates of vaccine take-up across the UK. 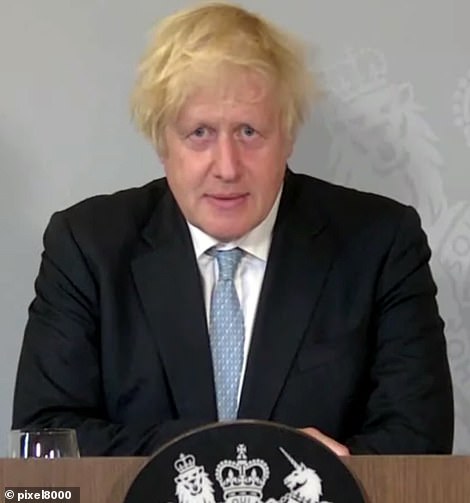 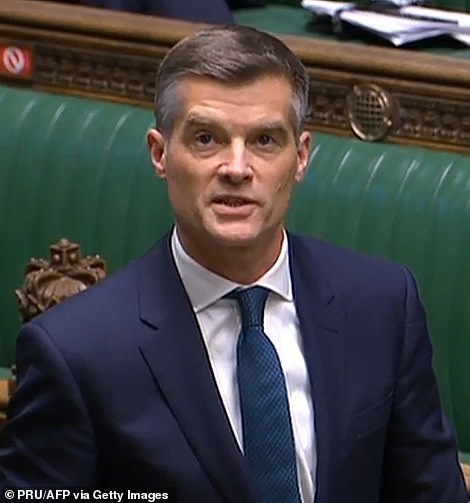 Scientist Carl Heneghan suggested it is the thin end of the wedge, saying if the government is worried about ‘crowded spaces’ they will end up demanding medical evidence to board the Tube.

And Professor Sir Jonathan Montgomery, who chaired the ethics advisory board for NHSx on its contact tracing app, warned that ministers need to be wary about ‘where incentive meets coercion’.

Critics also pointed out that being vaccinated is not a guarantee people do not have coronavirus, with around 40 per cent of hospital cases having been jabbed.