This is the startling moment a huge bull runs into a crowd and flings a man high into the air before trampling over him during a traditional festival in Spain which left 18 people injured.

The startling scene was recorded by an onlooker at the Bou en Corda (Bull on Rope) festival in the town of Ontinyent, in the eastern Spanish region of Valencia, which takes place every year to celebrate the Immaculate Virgin.

In the video, the bull, which is tied to a rope being held by a group of revellers, breaks free and charges at a group of onlookers who sprint away.

The huge bull catches up with the group and flings one man high into the air with its horns. 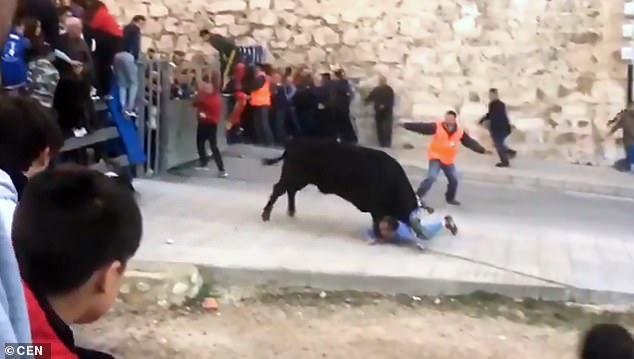 The revellers try to climb to safety in an effort to avoid being gored by the bull who has already attacked one man, who he has pinned to the ground

The man lands on the bull’s back before crashing to the ground when the animal turns around and tries to gore the victim with its horns before running over him.

The bull sprints towards another group of people as those holding the rope try to reign it in.

Local media report the victim’s condition is not known but he is not thought to have been seriously injured.

During the same event a woman, whose name was not reported, was reportedly left in a serious condition after a bull gored her into a wall. 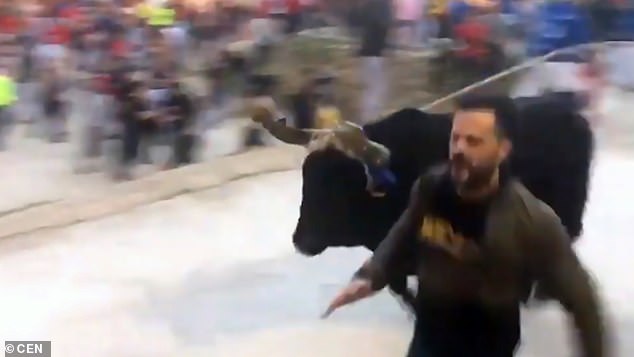 The huge bull catches up with the group after it broke loose from the rope and started running wild in the street, flinging one man high into the air with its horns 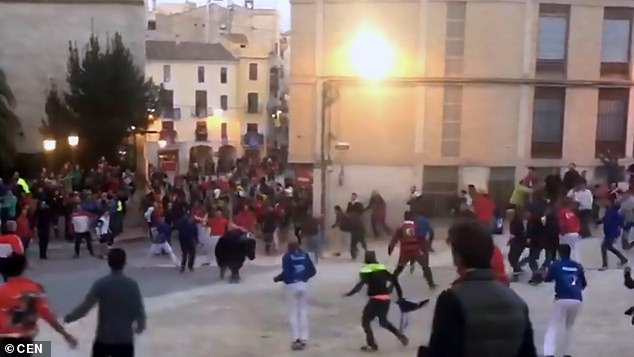 In the video, the bull, which is tied to a rope being held by a group of revellers, breaks free and charges at a group of onlookers who try to sprint to safety

She reportedly smacked her face into the wall and was rushed to the Ontiyent hospital before being transferred to the La Fe hospital in the city of Valencia.

The woman is reportedly in a serious condition with injuries to her face, jaw and cheeks.

Reports suggest a total of 18 people were injured in the three-day festival, with one male reveller being taken to hospital with broken ribs.

In the festival a bull is tied to a rope and left in the middle of the road surrounded by people.