Washington: The US House of Representatives has voted to prevent President Donald Trump from going to war with Iran without congressional approval, after more than two dozen Republicans joined Democrats to include the provision in an annual defence authorisation bill.

The move sets up a showdown with the Senate over whether the Iran restriction, which includes an exception for cases of self-defence, will be included in the final bill negotiated between the two chambers. 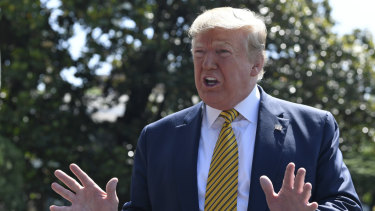 Donald Trump has threatened Iran with destruction and offered to help “make it great again”.Credit:AP

Friday's final vote, 220 to 197, was a crucial victory for House Speaker Nancy Pelosi, after fellow liberal Democrats revolted late last month over being forced to accept a Senate-negotiated border spending bill that omitted their key demands.

Republican leaders had argued the bill communicated to Tehran that the United States was divided, which could complicate Trump's ability to manage escalating tensions. Last month, the President authorised, then called off an air strike in response to Iran downing a US surveillance drone.

House members endorsed a repeal of the 2002 authorisation for use of military force that was passed to approve the Iraq invasion, and a statement adopted after the September 11 attacks, that ought to be replaced with a time-limited measure. 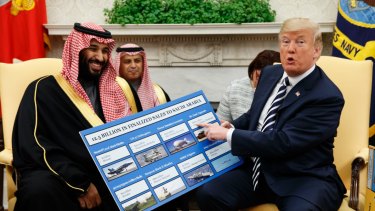 The bill freezes the sales of arms to Saudi Arabia. which President Donald Trump showcased as a great deal during a meeting with Saudi Crown Prince Mohammed bin Salman, left, last year.Credit:AP

They also voted in favour of suspending for one year the sale of air-to-ground munitions to Saudi Arabia and the United Arab Emirates, one of several efforts in the bill to deny weapons and limit US support for Saudi-led military operations in Yemen’s civil war.

The GOP-led Senate voted down a similar effort to include Iran language in its defence bill last month. But in the Democrat-led House, the Iran measure was one of several that were vital to securing support from liberal members, who had warned they might vote against the must-pass legislation.

Meanwhile, police in Gibraltar announced it has released on bail without charge four crew members of an Iranian oil tanker impounded in the British territory. The captain and chief officer of the Grace 1, a Panama-flagged ship, were arrested on Thursday. The ship was seized and continues to be held, on suspicion of transporting Iranian crude oil to Syria in violation of European Union sanctions.

The investigation was ongoing, police said.

"Should Britain let itself be influenced and drawn into dangerous games by the US, we would advise them to rather not do that," Mousavi said. 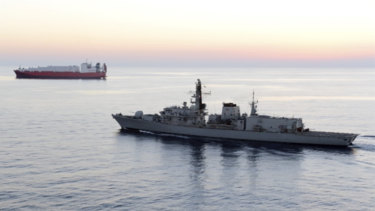 British authorities said Iranian vessels only turned away on Thursday after receiving “verbal warnings” from the HMS Montrose, foreground, which was accompanying a commercial ship through the narrow Strait of Hormuz.Credit:AP

It follows a declaration by Britain's Defence Ministry on Thursday that three Iranian ships had tried to “impede” a British oil tanker as it travelled through the Strait of Hormuz last week, after Iran threatened retaliation for the seizure of the Grace 1.

Washington has accused Tehran of being behind a series of recent attacks against commercial vessels near the strait.

In the end in Washington, only eight Democrats opposed the bill curbing Trump's ability to declare war on Iran, including the four freshmen who have sparred most openly with Pelosi: Alexandria Ocasio-Cortez , Ilhan Omar, Ayanna Pressley.

House Armed Services Committee Chairman Adam Smith, a Democrat, said "our bill isn't just good, it's better than the ones that the Republican Party has put together, because we believe the Pentagon should be accountable."