Colombo: Police in Sri Lanka arrested the reigning Mrs World for pulling the crown off the head of the winner of a Mrs Sri Lanka beauty pageant and allegedly causing injuries. She was later released on bail. 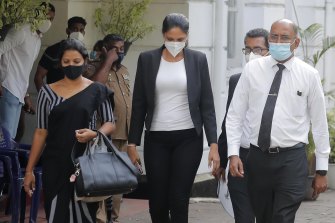 Moments after De Silva won the title, Jurie, who is also Sri Lankan, came on stage and snatched the crown from her, saying she was ineligible because she was divorced. Jurie then gave the crown to the first-runner up, declaring she was the winner.

In a statement on her Facebook page, De Silva denied being divorced.

“Being apart is one. Divorce is something else. I’m still an un divorced woman,” she wrote.

Police spokesman Ajith Rohana said police received a complaint from De Silva that she suffered injuries when her crown was removed.

Rohana said Jurie and a model, Chula Padmendra, were arrested on Thursday on charges of “simple hurt and criminal force” and were later released on bail. The two women have been ordered to appear in court on April 19.

Jurie declined to comment as she left the police station.

The incident at Sunday’s pageant, which was attended by the Prime Minister’s wife, created a huge uproar in the Indian Ocean island nation. On Monday, organisers of the pageant said they would return the crown to De Silva.