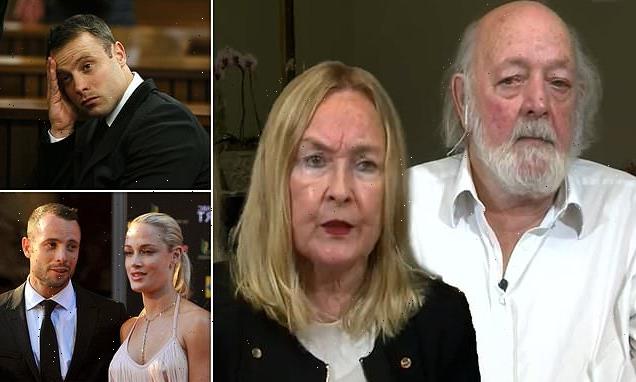 ‘Sorry is not enough’: Furious parents of Oscar Pistorius’ victim Reeva Steenkamp say he should serve entire 13-year sentence for killing their daughter and say he has shown ‘no remorse’ as he bids to be freed on parole

The parents of Reeva Steenkamp have blasted her jailed killer Oscar Pistorius for showing no remorse as the disgraced athlete bids to be freed on parole after serving half his sentence.

June and Barry Steenkamp said the situation is a ‘horror story’ just days after the Paralympian wrote them an ’emotionally distressing’ letter as part of South Africa’s ‘restorative justice’ parole process.

Speaking to Good Morning Britain from their Port Elizabeth home, June said: ‘He’s shown no remorse and he would only show remorse I think if it contributes to his getting out of jail. 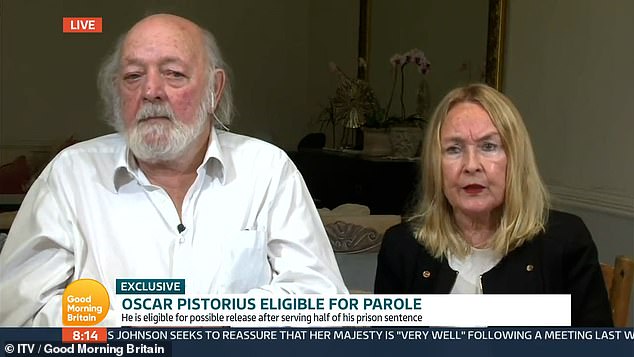 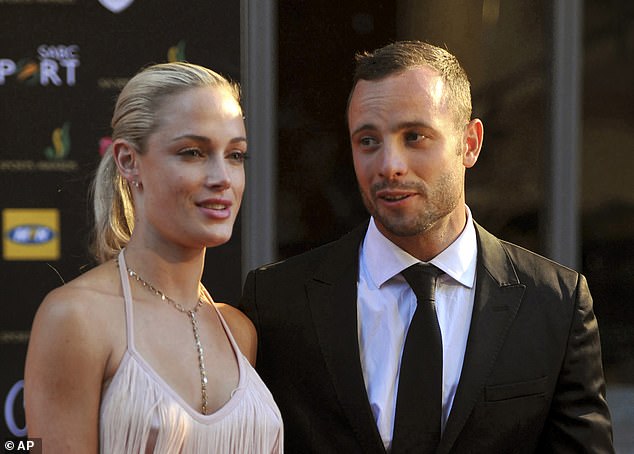 ‘That’s what we want, the truth. This has been a horror story for us.’

Pistorius, 34, has been eligible for parole since July after he was convicted of murder for shooting model Ms Steenkamp multiple times through a toilet door at his home in Pretoria, South Africa, on Valentine’s Day 2013.

He claimed he had mistaken the 29-year-old model and law graduate, who was famous in her own right in South Africa, for an intruder but was found guilty of manslaughter and sentenced to five years in prison.

The sentence was increased in 2015 to 13 years and five months after he was found guilty of murder on appeal. 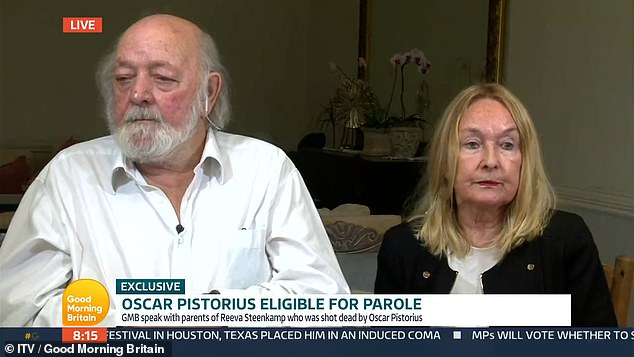 Pistorius, 34, has been eligible for parole since July after he was convicted of murder for shooting model Ms Steenkamp multiple times

But Pistorius may now be released on parole after serving six years in a low-security jail in Pretoria.

As part of the parole process, he penned a letter to Mr and Mrs Steenkamp which their lawyer described as ‘like ripping a Band-Aid off a wound’.

Speaking today, Barry said: ‘June and myself, we were dumbfounded.

‘I think the letter was sent to us to do with the parole that is coming up and yes, it’s only June and I and our lawyer that has seen what has been written in it and we’ve kept quiet and we don’t want to push it out to anyone as to what was said. We might let people know at a later stage but not now, what was written by Oscar.’

The grieving father added: ‘One day I would like to talk to Oscar, man to man.

‘I’d like to talk to him, June and myself we feel there are still a lot of things to come out of this story and we’re hoping that Oscar will tell us the truth, and that’s the reason why I’m the one who would like to speak to Oscar.

‘I would like to have a chat to him one day and we’ll see how it goes from there.’ 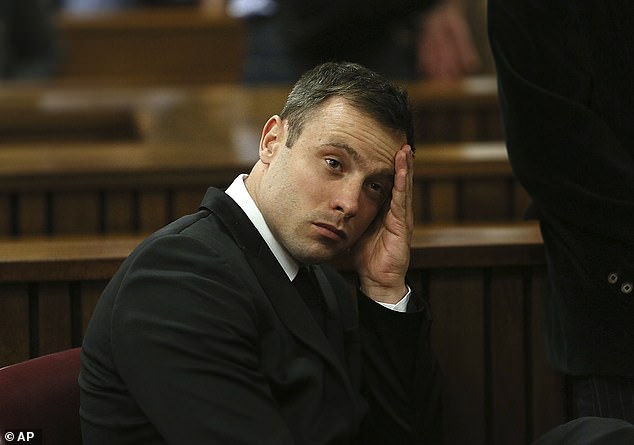 Asked if Pistorius should serve the entirety of his sentence, June said: ‘He must serve whatever his full time, in my eyes, he still must pay for what he’s done. And that’s what we’re expecting.’

Susanna Reid then asked the parents if they could ever forgive their daughter’s killer.

But June said: ‘Sorry is not enough in any case. It’s not enough for losing her life, her future was ahead of her. Now she has no wedding, we have no grandchildren and she never would have her wedding dress.

‘She had nothing. He took everything away from her and us and that is something that is important to me, the things that she would never have had.

‘I forgave him through God because I believe in God. I’m a Christian, and I had to. God was asked to forgive him, but it doesn’t mean that he hasn’t got to pay for what he’s done. He showed no remorse, and we don’t believe the story.

‘We don’t believe the story that he gave. We don’t know how it came to that. We want the truth.’

Speaking after the couple received the letter, their lawyer Tania Koen, told the Mirror: ‘I cannot divulge the contents of that letter.

‘It was quite emotionally distressing for them. They did not know it was coming and it was sent to me by his attorney.’ 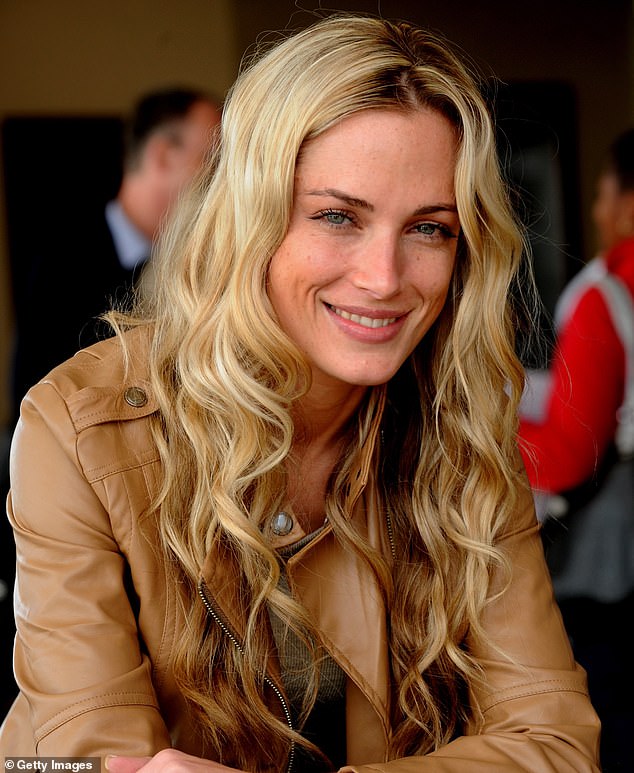 Pistorius, 34, has been eligible for parole since July after he was convicted of murder for shooting model Reeva Steenkamp (pictured) multiple times through a toilet door in his home Pretoria, South Africa, on Valentine’s Day 2013 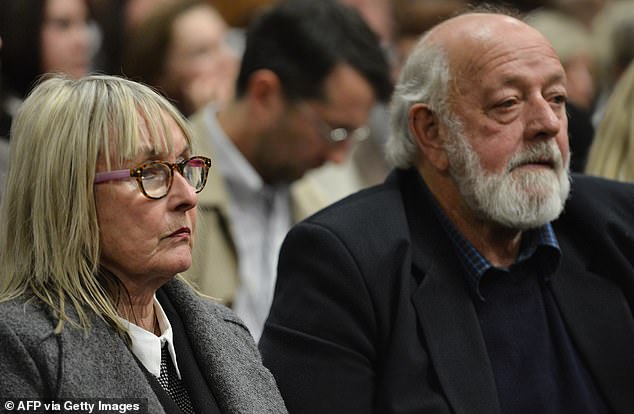 February 14 2013 – Pistorius is arrested at his home in Pretoria after shooting dead girlfriend Reeva Steenkamp.

February 19 – Reeva’s funeral is held in Port Elizabeth. Pistorius appears in court for the first day of his bail hearing. Prosecutor Gerrie Nel says Pistorius fired four shots through a bathroom door, hitting Steenkamp three times. His defence reads a statement by Pistorius in which he says he thought Steenkamp was an intruder.

August 19 – Pistorius is charged with premeditated murder on what would have been Reeva’s 30th birthday.

March 3, 2014 – Pistorius pleads not guilty in court to murder and three gun charges.

September 11 – The judge acquits Pistorius of pre-meditated and second-degree murder. But she says he acted ‘negligently’ in the killing. The judge announces she will continue delivering her verdict, including on a charge of culpable homicide on September 12.

September 12 – Pistorius is found GUILTY of culpable homicide of Steenkamp. Also found guilty on one firearm charge of firing a gun in a restaurant.

October 21 – Pistorius is sentenced to a maximum of five years in prison, with a three-year suspended term for firearms offences.

November 4 – Prosecutors appeal the sentencing, saying it was ‘shockingly light, inappropriate and would not have been imposed by any reasonable court’.

October 19, 2015 – The killer is released from prison after serving just 11 months of his five-year sentence. His lawyers successfully argued that he should be released on house arrest.

December 4 – South Africa’s prosecuting authority issues an arrest warrant for Pistorius but he will remain free on house arrest until sentencing.

July 6 2016 – Pistorius is sentenced to six years in prison for murder.

December 19 – Pistorius appeals his sentence and asks for his six-year term to be reinstalled.

July 2021 – Pistorius becomes eligible for parole after serving half his sentence, including the time spent in jail before his sentencing.

The attorney also said that the parents were upset to learn that Pistorius has been eligible for parole since July when they had been told he would not be released from prison until March 2023.

A parole hearing had been scheduled for last month but it was cancelled, partly because a meeting between Pistorius and Steenkamp’s parents had not been arranged. The date for a new hearing has not yet been set.

Pistorius, who has served half of his 13-year sentence after being convicted of murder in 2015, must also meet June and Barry before he is considered for release.

The Steenkamps want a face-to-face meeting with Pistorius, as is their right under South Africa’s victim-offender dialogue policy.

They have previously said they want to challenge Pistorius on why he shot their daughter and they would get to do that, with victim-offender meetings aimed at achieving some kind of closure for families of victims of crimes.

Ms Koen told the Mirror: ‘Yes, they want to do that face to face.

‘Barry has said for years he wants to meet Oscar and he has questions to ask. They are not emotionally prepared, but are prepared to meet Oscar.

‘They accept the day will come when Oscar will be eligible for parole and they would give their input.’

Ms Koen said earlier: ‘They (Barry and June) feel that Reeva has got a voice. They are Reeva’s voice, and they owe it to their beloved daughter.’

But she said Barry and June were left upset by the way the parole board has handled Pistorius’s parole.

Ms Koen said: ‘What was also very upsetting was the disregard for their emotional wellbeing.

‘They had to find out the parole board had already convened a date for parole and never advised them about it.

‘The proper procedure was not followed.’

The Steenkamps will be allowed to make recommendations to the parole board, although Koen wouldn’t say if they will oppose Pistorius’ release.

‘We have discussed it,’ Koen said, but declined to give details.

The opinion of victims’ families is considered by a parole board when deciding whether to release an offender, but it’s not the only criteria.

Pistorius could be taken from where he is incarcerated at the Atteridgeville Correctional Center in the capital, Pretoria, to the Steenkamps’ home city of Gqerberha for the victim-offender meeting because, according to Ms Koen, Barry Steenkamp is unable to travel due to his health.

Pistorius lawyer Julian Knight said it might ‘turn out’ that way but the corrections department would decide. Mr Knight said he was hopeful that the meeting between Pistorius and the Steenkamps, which must happen before a parole hearing, could take place by the end of the year.

It was a ‘huge surprise’ for the Steenkamps when corrections services officials contacted them last month to say that Pistorius is eligible for parole, Ms Koen said. They believed he would only be eligible in 2023, she said.

‘(It) opens a lot of wounds, or rips off the plasters they had put on those wounds,’ Ms Koen said. 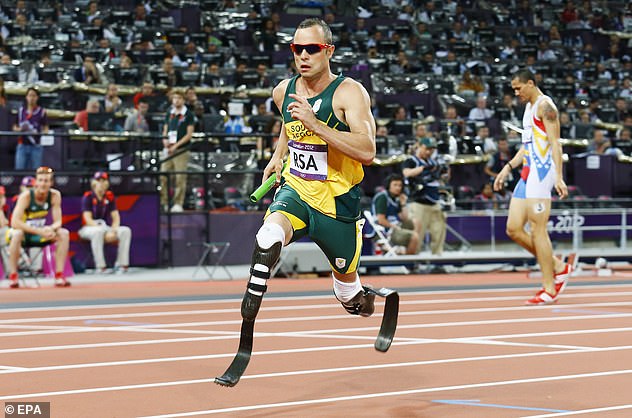 Pistorius (pictured at the London Olympic Games) was sentenced to six years in jail for murder, but prosecutors again appealed what they called a shockingly light punishment for murder. The Supreme Court of Appeal then more than doubled his sentence in 2017

The confusion over when he would be eligible emanated from Pistorius’ long and protracted murder trial and two subsequent appeals by prosecutors. Pistorius went on trial in 2014 and his case was only finalised in 2018.

The multiple Paralympic champion was initially found guilty of culpable homicide – an offense comparable to manslaughter – for shooting Steenkamp with his licensed 9 mm pistol.

He claimed at his trial it was a tragic accident and he mistook her for a dangerous intruder.

Prosecutors appealed the manslaughter finding and secured a murder conviction.

Pistorius was sentenced to six years in jail for murder, but prosecutors again appealed what they called a shockingly light punishment for murder. The Supreme Court of Appeal then more than doubled his sentence in 2017.

Mr Knight later sought clarification over the sentence from the Supreme Court to see if the time Pistorius had already served in prison for culpable homicide should count toward his parole.

It did, Mr Knight said, meaning Pistorius could be considered for parole two years earlier than courts had initially indicated.

Knight said he believed Pistorius had met the requirements to be released early.

‘From what I have observed of him he has been a model prisoner while he has been in prison,’ Knight said. ‘My view is that he does meet the requirements to be placed on parole but the procedures must be followed.’

Mr Knight said a parole board could impose a range of conditions on Pistorius if he is released, like only being allowed to leave home to go to work during the week, and only for a limited time on weekends to buy groceries and attend church.