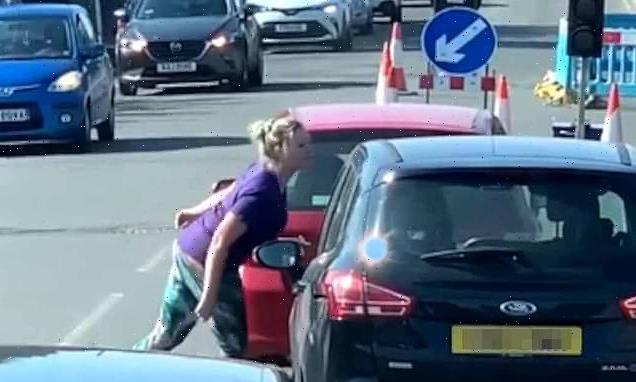 Shocking video shows a raging woman spitting at a fellow motorist after getting into an argument at a red light.

A truck driver captured the moment the female driver got out of her car and took aim at the motorist in the vehicle behind her in Bootle, Merseyside on Monday.

In the video, the blonde woman is seen ranting while standing beside the window of the black Ford S Max that is stopped behind her red Honda Jazz at roadworks.

The unfortunate driver is trapped in a queue of traffic waiting at the temporary light while dozens of cars travel in the opposite direction along the one open lane.

The woman then appears to retreat to her car but quickly changes her mind and walks back to hurl a mouth full of spit into the direction of the other driver.

Footage shows her spit again into the car before returning to her vehicle and slowly driving off as the lights turn green.

Still apparently enraged at the altercation, the woman continues to brake unexpectedly to hold up the driver and is met by a wave of car horns in response. 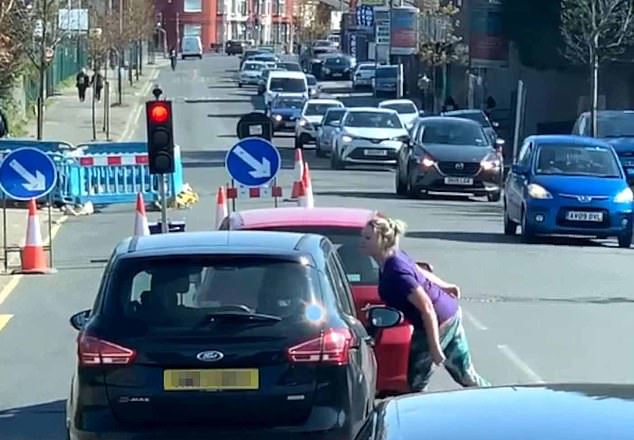 A truck driver captured the moment a female driver got out of her car and spat at the person driving behind her in Bootle, Merseyside on Monday

The shocked truck driver posted the video on social media the same day, writing: ‘If you’re the driver of that Jazz you should be massively ashamed of yourself.’

The video has since received hundreds of comments from social media users condemning the woman’s actions.

Catherine Rowe wrote: ‘Unbelievable, why would anyone carry on like that. Spitting?’ 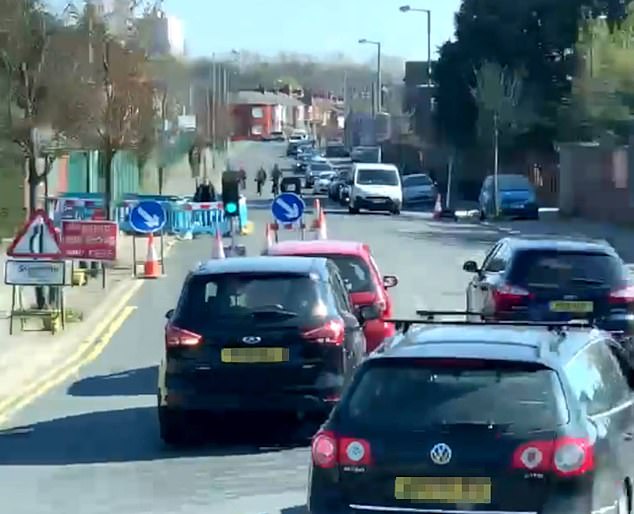 Still enraged at the altercation, the woman continued to brake unexpectedly to hold up the driver and is met by a wave of car horns in response

Speaking today the truck driver said: ‘I just knew something was about to kick off, she had an extreme look of anger on her face.

‘I have no idea what started it but the woman in the black car didn’t react at all. I felt awful for her.

‘I was shocked that the other traffic just drove around them.’

Merseyside Police are understood to have been in contact with the victim following the incident, but so far no report has been formally made.