Moscow: Russian President Vladimir Putin has issued a chilling warning about the rising threat of nuclear war, saying it could lead to "the destruction of civilisation as a whole and maybe even our planet".

Speaking at his annual news conference, Putin also scoffed at Western claims he wants to dominate the world, and says Western countries are antagonising Russia for their own domestic reasons, and at their own peril. 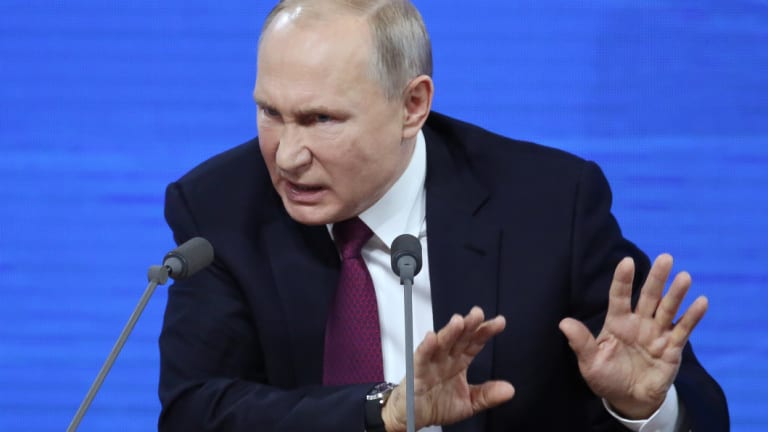 Vladimir Putin speaks at his annual press conference in Moscow.Credit:Bloomberg

US officials say the withdrawal from the INF was prompted by Russian violations of the treaty.

Putin noted that Western analysts are talking about the possibility of using low-yield nuclear weapons and said lowering the threshold could lead to "a global nuclear catastrophe".

He said Russia will have to ensure its security, and headed off arguments it was trying to gain unilateral advantages, saying the country was "trying to preserve the balance".

Putin also emphasised that the US is pondering the use of ballistic missiles with conventional warheads, saying that the launch of such a missile could be mistaken for the launch of a nuclear-tipped one.

"If that happens, it could lead to the destruction of civilisation as a whole and maybe even our planet," he said.

Putin said it's the US, not Russia, that's aspiring to dominate the world.

He pointed at US annual defence spending exceeding $US700 billion ($981 billion), comparing it with Russia's military budget of $US46 billion.

But the Russian President welcomed President Donald Trump's decision to withdraw the US military from Syria, saying the country "has done the right thing".

Putin showed no sign of backing down from Russia's stance on Ukraine, and accused his Ukrainian counterpart of provoking a naval stand-off with Russia to boost his electoral prospects.

On the Russian economy, Putin hailed another year of growth after a previous period of stagnation.

Russia's gross domestic product is set to grow by 1.8 per cent this year, while industrial output has grown faster at 3 per cent, he said.

The Russian President noted that the nation's hard currency reserves have increased from $US432 billion at the start of the year to $US464 billion now.

Putin pledged that the government will create incentives to speed up growth.