KYIV, Ukraine (AP) — Russia vowed to continue its bloody offensive in Ukraine as the war neared its seventh week Wednesday, as President Vladimir Putin insisted the campaign was going as planned despite a major withdrawal and significant losses.

Thwarted in their push toward the capital, Kyiv, Russian troops focused on the eastern region of Donbas, where Ukraine said it was investigating a claim that a poisonous substance had been dropped on its troops. It was not clear what the substance might be, but Western officials warned that any use of chemical weapons by Russia would be a serious escalation of the already devastating war.

Russia invaded on Feb. 24 with the goal, according to Western officials, of taking Kyiv, toppling the government and installing a Moscow-friendly regime. In the six weeks since, the ground advance stalled and Russian forces lost potentially thousands of fighters and were accused of killing civilians and other atrocities.

Putin said Tuesday that Moscow “had no other choice” and that the invasion aimed to protect people in parts of eastern Ukraine and to “ensure Russia’s own security.” He vowed it would “continue until its full completion and the fulfillment of the tasks that have been set.” 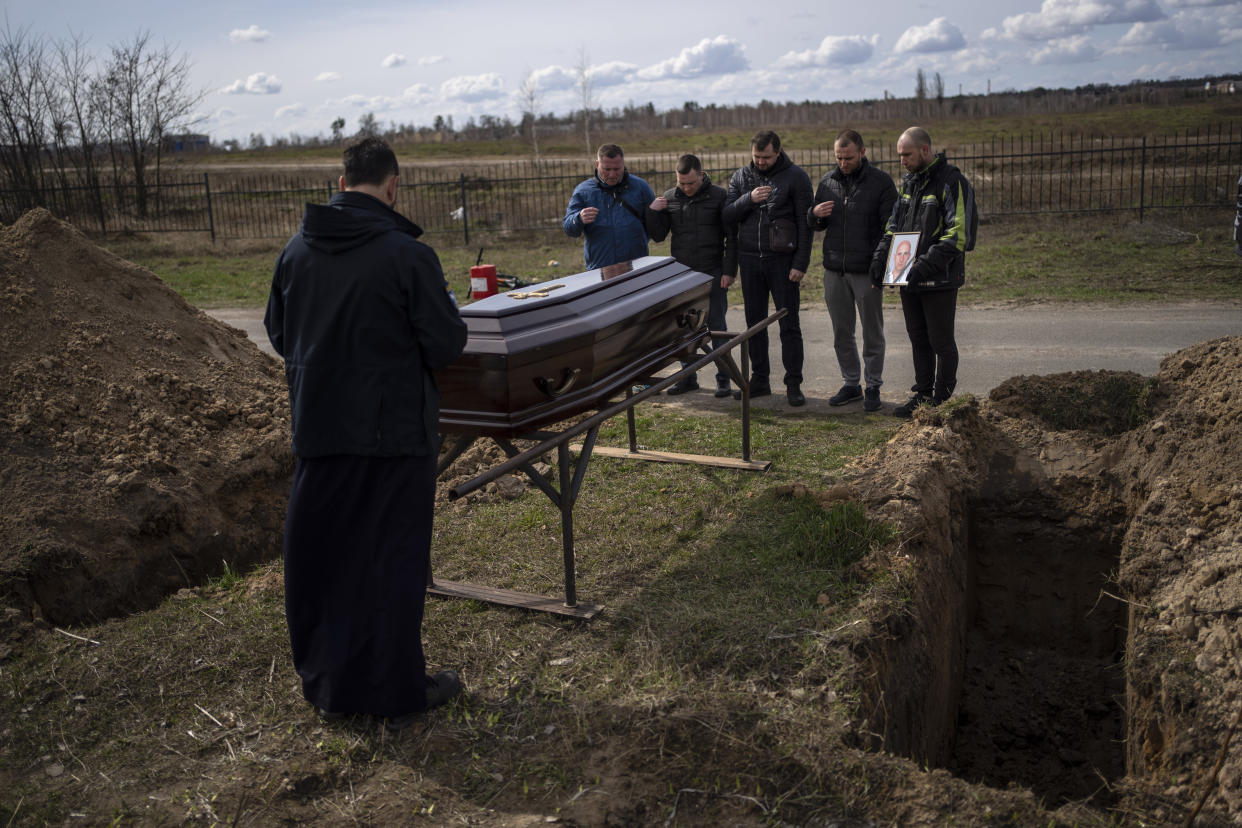 For now, Putin’s forces are gearing up for a major offensive in the Donbas, where Russian-allied separatists and Ukrainian forces have been fighting since 2014, and where Russia has recognized the separatists’ claims of independence. Military strategists say Moscow believes local support, logistics and the terrain in the region favor its larger, better-armed military, potentially allowing Russia to finally turn the tide in its favor.

In Mariupol, a strategic port city in the Donbas, a Ukrainian regiment defending a steel mill alleged that a drone dropped a poisonous substance on the city. The assertion by the Azov Regiment, a far-right group now part of the Ukrainian military, could not be independently verified. The regiment indicated there were no serious injuries.

Zelenskyy said that while experts try to determine what the substance might be, “The world must react now.”

Ukrainian Deputy Defense Minister Hanna Maliar said officials were investigating, and it was possible phosphorus munitions — which cause horrendous burns but are not classed as chemical weapons — had been used in Mariupol, which has been pummeled by weeks of Russian assaults.

Western leaders warned that if chemical weapons are found to have been used, it would amount to a grievous breach of international law.

President Joe Biden for the first time referred to Russia’s invasion as a “genocide”and said “Putin is just trying to wipe out the idea of even being a Ukrainian.” 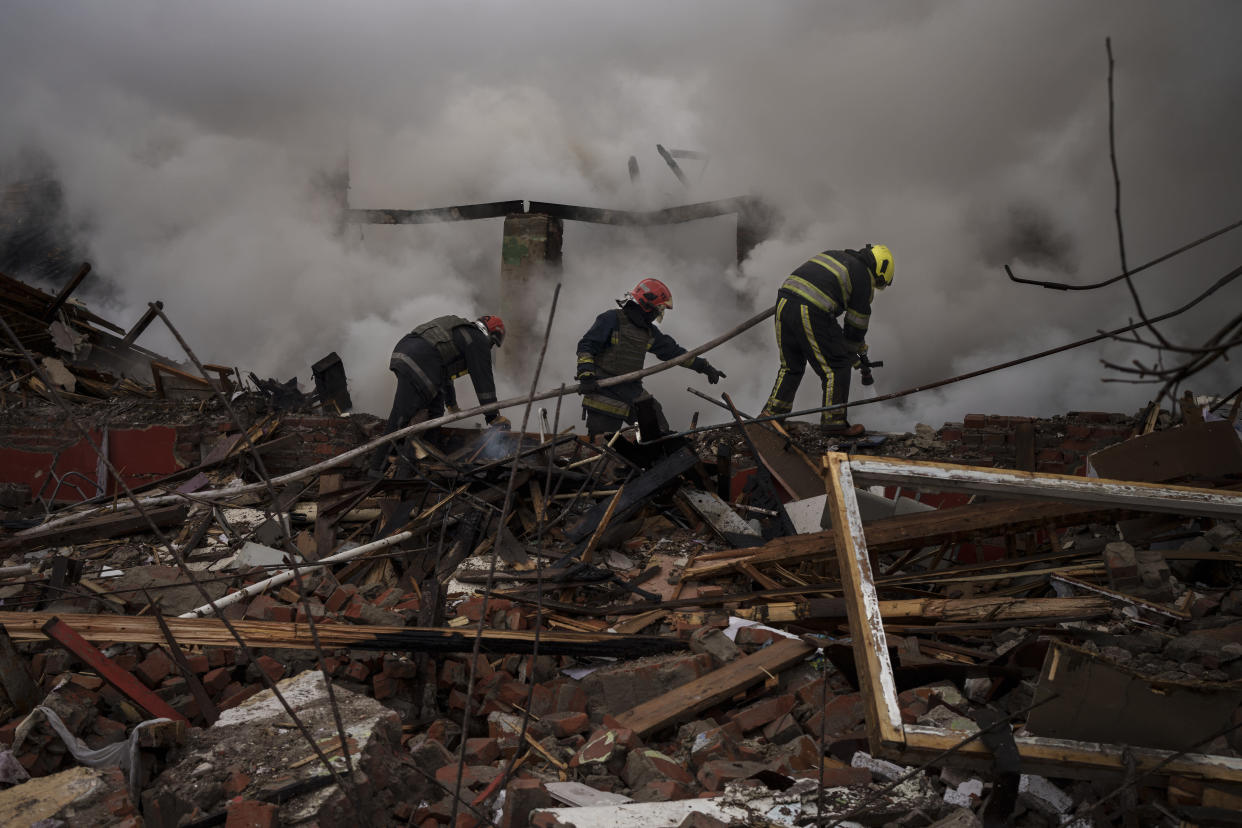 The Pentagon said it could not confirm the drone report but reiterated U.S. concerns about Russia using chemical agents. Britain, meanwhile, has warned that Russia may resort to phosphorus bombs, which are banned in civilian areas under international law, in Mariupol.

Most armies use phosphorus munitions to illuminate targets or to produce smoke screens. Deliberately firing them into an enclosed space to expose people to fumes could breach the Chemical Weapons Convention, said Marc-Michael Blum, a former laboratory head at the Netherlands-based Organization for the Prohibition of Chemical Weapons.

“Once you start using the properties of white phosphorus, toxic properties, specifically and deliberately, then it becomes banned,” he said.

In Washington, a senior U.S. defense official said the Biden administration was preparing another package of military aid for Ukraine to be announced in the coming days, possibly totaling $750 million. The official spoke on condition of anonymity to discuss plans not yet publicly announced. Delivery is due to be completed this week of $800 million in military assistance approved by Biden a month ago.

In the face of stiff resistance by Ukrainian forces bolstered by Western weapons, Russian forces have increasingly relied on bombarding cities, flattening many urban areas and killing thousands. The war has driven more than 10 million Ukrainians from their homes — including nearly two-thirds of the country’s children.

Ukraine's Deputy Prime Minister Iryna Vereshchuk said humanitarian corridors used to get people out of cities under Russian attack will not operate on Wednesday because of poor security.

She said that in the southeast Zaporizhzhia region, Russian troops blocked evacuation buses, and in the Luhansk region, they were violating the cease-fire. "The occupiers not only disregard the norms of international humanitarian law, but also cannot properly control their people on the ground. All this creates such a level of danger on the routes that we are forced to refrain from opening humanitarian corridors today.”

Moscow’s retreat from cities and towns around Kyiv led to the discovery of large numbers of apparently massacred civilians, prompting widespread condemnation and accusations of war crimes.

Zelenskyy said evidence of “inhuman cruelty” toward women and children in Bucha and other suburbs of Kyiv continued to surface, including alleged rapes.

“Not all serial rapists reach the cruelty of Russian soldiers,” Zelenskyy said. 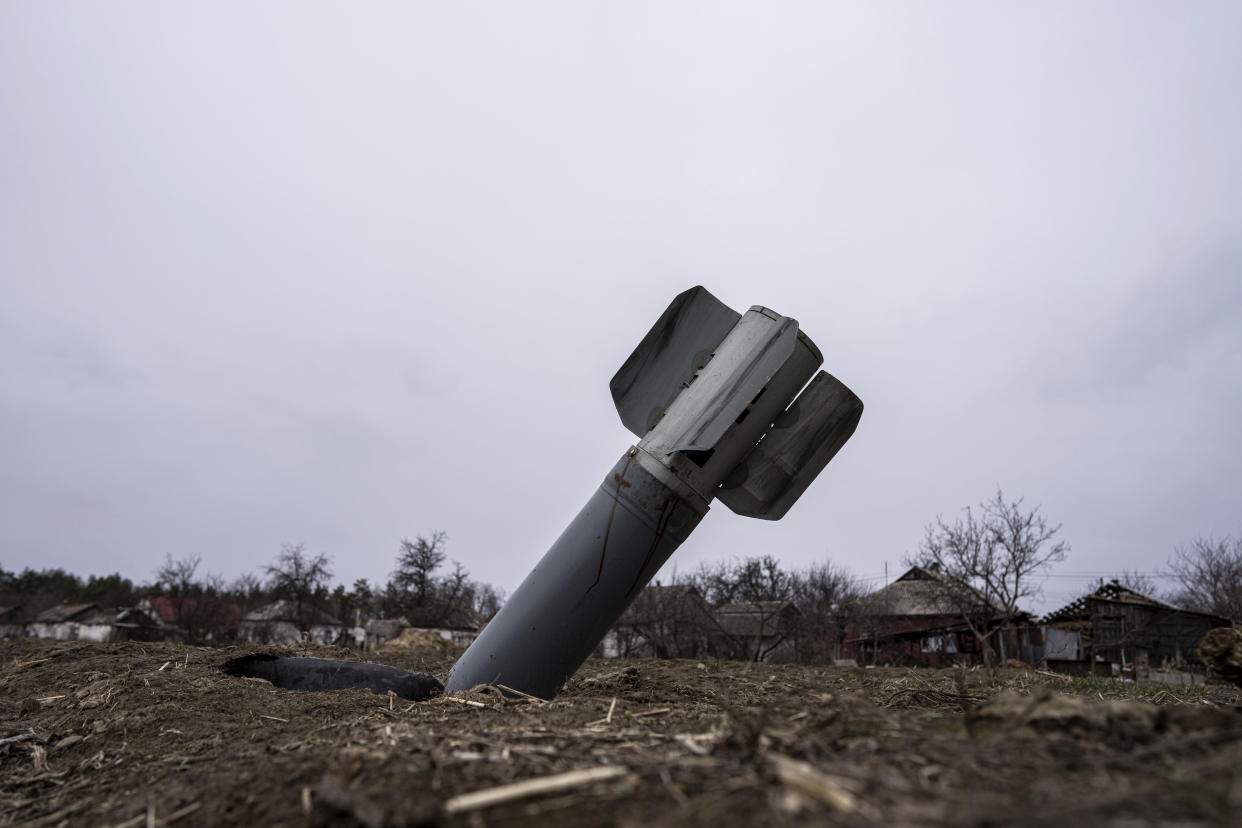 More than 720 people were killed in Kyiv suburbs that had been occupied by Russian troops and over 200 were considered missing, the Interior Ministry said early Wednesday.

In Bucha alone, Mayor Anatoliy Fedoruk said 403 bodies had been found and the toll could rise as minesweepers comb the area.

In the Chernihiv region, villagers said more than 300 people had been trapped for almost a month by the occupying Russian troops in the basement of a school and only allowed outside to go to the toilet or cook on open fires.

Valentyna Saroyan told The Associated Press she saw at least five people die in Yahidne, 140 kilometers (86 miles) north of Kyiv. In one of the rooms, the residents wrote the names of those who perished during the ordeal — the list counted 18 people.

Villagers say they don’t know the cause of the deaths. Russian soldiers allowed them to remove the bodies from time to time in order to bury them in a mass grave at the local cemetery.

Julia Surypak said the Russians only allowed some people to make a short trip home if they sang the Russian anthem. Another resident, Svitlana Baguta, said a Russian soldier made her drink from a flask pointing a gun at her face.

Ukraine’s prosecutor-general’s office said Tuesday it was also looking into events in the Brovary district, which lies to the northeast. It said the bodies of six civilians were found with gunshot wounds in a basement in the village of Shevchenkove and Russian forces were believed to be responsible.

Prosecutors are also investigating allegations that Russian forces fired on a convoy of civilians trying to leave by car from the village of Peremoha in the Brovary district, killing four people including a 13-year-old boy. In another attack near Bucha, five people were killed including two children when a car was fired upon, prosecutors said.

Putin falsely claimed Tuesday that Ukraine’s accusation that hundreds of civilians were killed by Russian troops in the town of Bucha were “fake.” Associated Press journalists saw dozens of bodies in and around the town, some of whom had their hands bound and appeared to have been shot at close range.