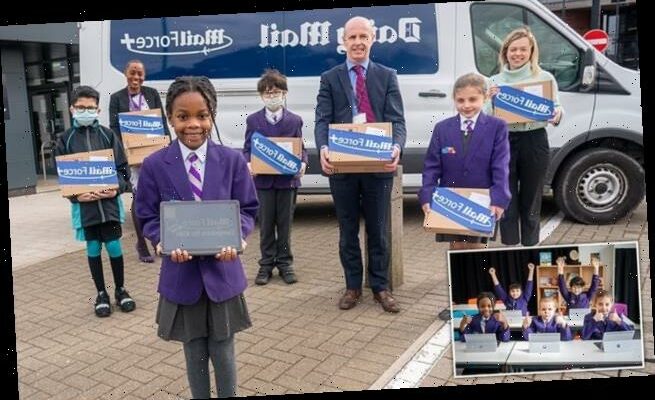 Pupils were delighted to get their hands on new Mail Force laptops after months of sharing tiny mobile phone screens with their siblings.

Children who struggled with online learning because of limited resources at home are returning to school today – but they need to catch up on the months of schooling lost during the pandemic.

After being handed ten Microsoft Surface Go 2 devices, Tracey Bowen, head teacher of the primary school, said the donations would help to narrow the academic gap between disadvantaged pupils and their peers. 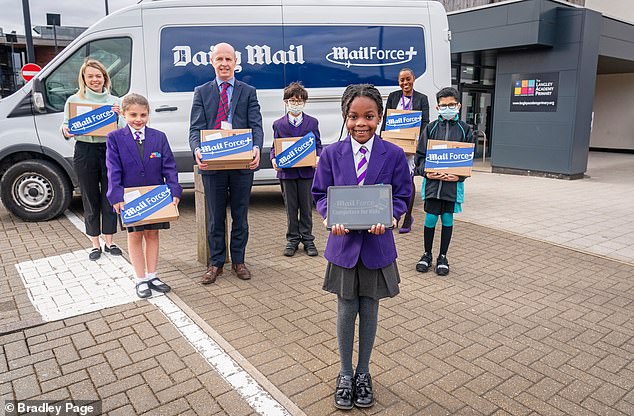 ‘We can’t thank the Daily Mail and its readers enough for this life-changing opportunity,’ she said.

How to get the SIM cards

Schools can apply for free SIM cards at www.vodafone.co.uk/mailforce

Head teachers can request a maximum of 80 for a secondary and 50 for a primary. Cards are allocated on a first-come-first-served basis, but priority is given to areas with higher numbers of pupils on free school meals. Schools with lower numbers of such pupils will be capped at 20 to 50 SIMs.

SIM cards are dispatched by courier to schools in England, Scotland, Wales and Northern Ireland. Head teachers allocate the SIMs to pupils. Inserted into a mobile phone, each SIM gives 30GB of free data – enough for the equivalent of approximately nine weeks of online learning.

Schools in England can apply via the Department for Education. They should visit get-help-with-tech.education.gov.uk/start

In Scotland, Wales and Northern Ireland, we welcome applications from education authorities, trusts or charities focused on children and young people. They should visit www.mailforcecharity.co.uk/register to apply. Schools should encourage their LEA or trust to submit their details.

‘This has put smiles on the faces of the children and their parents who have struggled during lockdown.

‘I know the impact it will have on their lives. It will finally allow the kids to do their best. They have walked into school with the biggest smiles on their faces, thanks to you.’

The 49-year-old added: ‘Some kids have had to use one device between multiple family members, which has meant a lot of children haven’t had access to online learning materials.

‘We can already see the gap between the children whose parents can afford the technology and their classmates.’

Tilly Darienzo, eight, has had to rely on her mother’s mobile phone to take part in lessons – and has had to share it with her three-year-old sister. She said: ‘I am so excited to have my own laptop and do all of my work because most of the time my sister gets her own way!’

Meral Begu, 44, was struggling after the computer her three children were sharing during lockdown stopped working a few weeks ago. Her sons Mohammed, nine, and Muadh, eight, and daughter Kanita Kelmendi, six, had to take it in turns to use their mother’s smartphone.

Miss Begu said: ‘Thank you so much for this. It will help them all so much because it has been so hard for them to study and to learn.’

Mohammed added: ‘I am so happy with this new laptop because it will help me at school. The old one broke and it has been hard to focus on that small screen and do all my work.’ The Department for Education has already provided 119 laptops to Langley Academy Secondary, which has around 1,200 students, and 47 laptops to Langley Academy Primary, which has almost 600 pupils. Schools across England have now placed orders for some 10,000 Mail Force laptops, with hundreds more destined for other parts of the UK.

Heads can also claim free Vodafone SIM data cards to hand out to pupils struggling to afford the cost of getting online. Each 30GB card provides enough data for about nine weeks of learning. Mail Force has teamed up with Vodafone to make thousands of SIMs available free of charge. 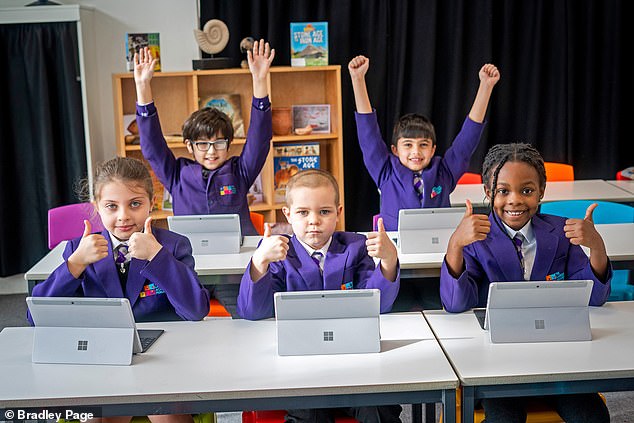 TO YOU, THE READER: How to send us donations

The Daily Mail has launched a brand new campaign, Computers For Kids, to raise money for Mail Force – a charity which aims to provide much needed school equipment and resources for pupils across the UK learning from home.

With schools closed, we are left with the dilemma of hundreds of thousands of pupils in the UK having no access to a computer in their home.

As part of this campaign, companies are donating their old laptops which, for around £15, can be wiped, professionally refurbished and made safe and fit for home schooling. They can then be delivered to a child or young person who needs one.

In addition, the campaign is looking to support children’s needs in other ways such as funding brand new laptops and tablets, and assisting with data access and connectivity for online learning. Any surplus funds will be used to support of the work of UK schools via other means.

TO MAKE A DONATION ONLINE

Visit mailforcecharity.co.uk/donate and follow the steps to complete your donation.

TO COMPANIES: Could you give your old laptops?

Upgrading office computers is something all companies do from time to time – and there has never been a better time to donate old laptops. If you are a company with 50 laptops or more that you could give, please visit www.computacenter.com/daily-mail to check they are suitable and register your donation. We will arrange for collection by our specialist partners Computacenter. Please note: we cannot accept donated laptops from individuals.

COMPANIES SHOULD GO TO: computacenter.com/daily-mail

TO SCHOOLS: Where to apply for the computers

Schools must apply to the Department for Education, which is managing the demand and prioritising the schools most in need. The Mail Force initiative means more laptops will become available more quickly.

by Sam Greenhill Chief Reporter for the Daily Mail

Mail Force was given a double boost yesterday by big companies.

Barclays pledged a stunning £500,000 to the campaign to help school- children get online.

And software firm Adobe offered a further £10,000 – every penny of which will be spent on buying new computers or refurbishing donated ones.

It means the total raised in cash and computers by the Mail Force charity now stands at more than £11.4million.

As schools prepare to reopen today, teachers face the herculean task of helping pupils catch up on months of lost learning.

It is a challenge made all the more daunting by the ‘digital divide’ – the yawning gap between families with enough devices and those without.

Thanks to the Daily Mail’s Computers for Kids campaign, thousands more children will now have a laptop or tablet to access schoolwork in the evenings and at weekends. 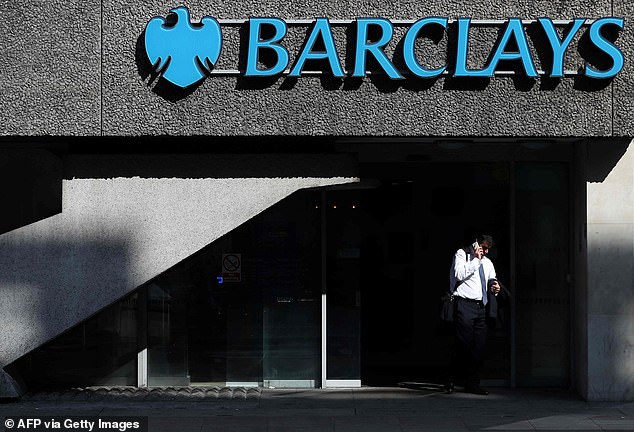 Barclays pledged a stunning £500,000 to the campaign to help school- children get online

And the sensational gift from Barclays will fund thousands more. Matt Hammerstein, chief executive of Barclays UK, said: ‘Whilst the return to classrooms will be hugely beneficial for our children, the digital divide exposed over the last year will not disappear as schools revert to face-to-face learning. Campaigns such as this remain vital. We are proud to be supporting Mail Force.’

The first mass batch of Mail Force laptop deliveries went to schools across the country last week. Some 5,000 Chromebooks and other models were shipped to more than 100 towns and villages.

Hundreds more will follow until the Mail Force funds run out – and yesterday software giant Adobe helped to put off that day a little longer.

Its generous donation will buy new laptops or be spent on refurbishing used computers donated by other big firms.

Lee Edwards, Abode’s vice president of UK, Ireland, Middle East and Africa, said: ‘Education and digital literacy is vital for every child, which is why being able to support the valuable efforts of Computers for Kids is one of the many ways companies such as our own can help.’