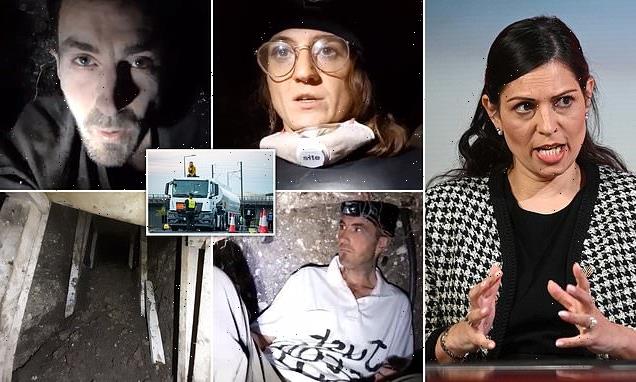 ‘These so-called eco-warriors are waging a war against the British people’: Priti Patel blasts mob’s war on democracy as Just Stop Oil protesters disrupt deliveries of fuel, food and newspapers

Priti Patel has furiously criticised eco ‘thugs’ for ‘waging a war against the British people’ after they spent days tunnelling under roads, disrupting grocery and fuel deliveries and the production of the Daily Mail newspaper.

The Home Secretary urged police to be tougher on ‘lawless’ Just Stop Oil activists whose protest blocking a fuel depot in turn shut the roads leading to a printworks.

The Mail was only able to deliver newspapers to readers yesterday morning after a last-minute agreement to print at alternative sites, with some delivery drivers diverted many miles away and other drivers brought in to fulfil orders.

Essex Police had stopped all vehicles from using the road because activists claimed to have weakened the road with their tunnelling.

It was reopened in the early hours but only to ‘priority traffic’ – although newspaper deliveries were not included, apparently based on government advice.

Miss Patel said: ‘These thugs and so-called eco-warriors are waging a war against the British people by going out of their way with planned disruptions affecting our daily way of life – our freedoms, our free Press. They are in the wrong.

‘They should all be stopped, in my view. This is a symptomatic illustration of lawlessness in our country where it’s seen as OK for these people to behave in this way. It is not OK.

‘The police must impose the full force of the law and not allow these protesters to get on site. There are laws in place which should be used. Laws including arrest for aggravated trespass exist and my Public Order Bill will bring in new criminal offences for these tactics and protests.’ 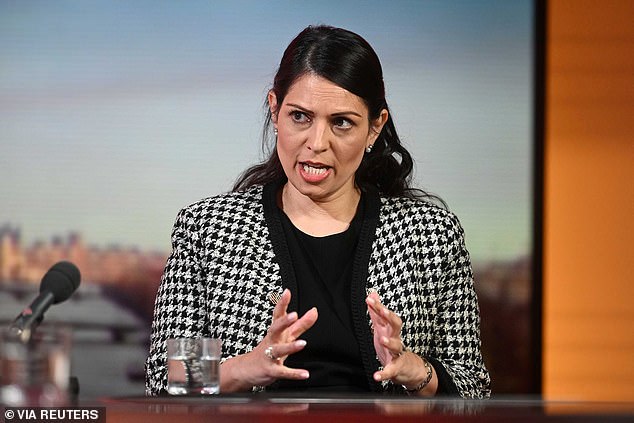 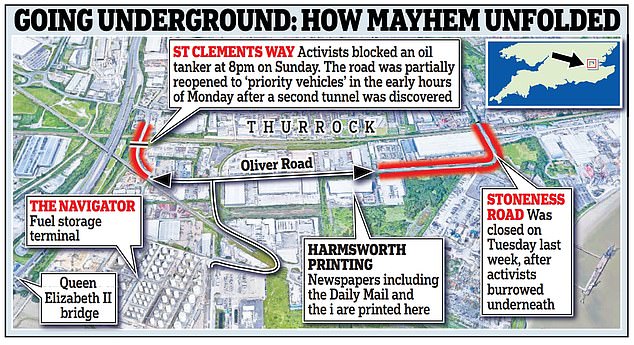 But Assistant Chief Constable Glen Pavelin struck a different tone as he asked the protesters to consider standing down.

He said: ‘We take the concerns of this particular protest group, its members and supporters seriously and are willing to work with you so that your rights to peaceful protest can take place without members breaking the law.

‘The current action is dangerous and putting lives at risk. We encourage those involved to re-evaluate the action they are taking.’

Activists have been burrowing underneath the two main access routes near the depot for a week, seeking to disrupt fuel supplies.

They forced police to close Stoneness Road in Essex last Tuesday after tunnelling underground, although that hideaway is now empty after the final activists were arrested last night.

They then blocked St Clements Way late on Sunday evening by climbing on top of an oil tanker and deflating its tyres. 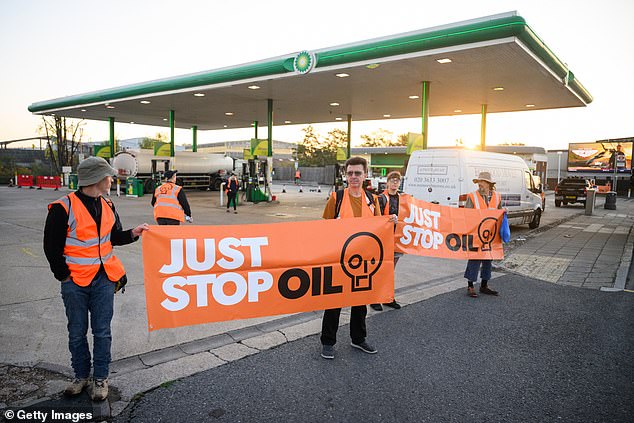 Protesters in a second tunnel underneath St Clements Way said they have managed to break through to within an inch of the road’s surface, and claimed it is at risk of collapse.

Police restricted the number of HGVs using the road to prevent it being put under too much stress. Co-op lorries, oil tankers and HGVs carrying medicines were being waved through road blocks by police officers yesterday morning, but other traffic not on the list was refused access in or out of the industrial estate. One businessman said his freight company could ‘go to the wall’ unless his drivers were allowed through.

Haulage company boss Joanne Collison said the road closures would cost her firm up to £30,000. A Just Stop Oil spokesman said wider disruption to other businesses, including the print centre, was unintentional. She said their aim was to ‘continue demanding that the UK Government end licensing and consents for new fossil fuel projects’. There have been eight arrests.

The Public Order Bill was unveiled as part of the Queen’s Speech, with harsher sentences and new criminal offences for some tactics used by eco-protesters, such as ‘locking on’ to public transport infrastructure.

By Ryan Hooper and Josh White

They have already disrupted Premier League football and caused chaos on the red carpet with their protests.

But Just Stop Oil activists show little sign of stopping, with an apparently growing band of supporters willing to glue themselves to roads and pavements in a bid to further their cause.

For the past week, demonstrators have been digging under road surfaces in Thurrock, Essex, aiming to disrupt fuel supplies. Eight people were arrested after they blocked a tanker, deflated its tyres and climbed on board the vehicle on Sunday evening.

It was only a little over six months ago that the campaign group staged its first major protest. Some 30 supporters swarmed the Baftas ceremony at the Royal Albert Hall in central London, banging drums, chanting and setting off smoke bombs as they demanded an end to new fossil fuel projects. 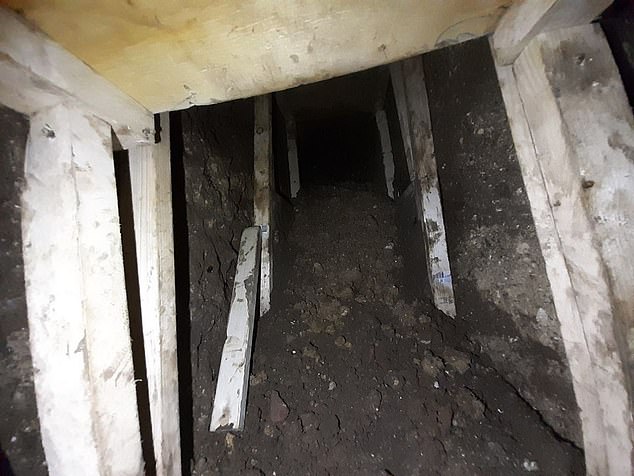 For the past week, demonstrators have been digging under road surfaces in Thurrock, Essex, aiming to disrupt fuel supplies. Pictured: A Just Stop Oil’s video from underneath St Clements Way 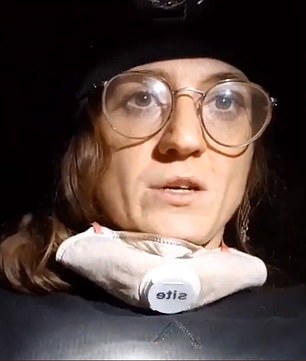 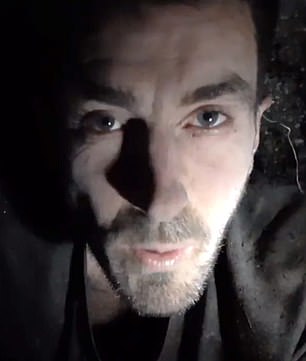 Just Stop Oil posted images on social media of protesters, including mother-of-two identified only Stephanie, in the tunnels

Just Stop Oil activists show little sign of stopping, with an apparently growing band of supporters willing to glue themselves to roads and pavements in a bid to further their cause. Pictured: Another protester in a tunnel

Then serial protester Louis McKechnie, 21, ran on to the pitch at Goodison Park to disrupt a football match between Everton and Newcastle United, fastening himself to a goalpost with a cable tie. Five activists then stormed the track at the British Grand Prix at Silverstone, before two glued themselves to John Constable’s masterpiece, The Hay Wain, at the National Gallery in London.

Just Stop Oil was formed at the end of 2021, with veteran environmental activist Roger Hallam, co-founder of Extinction Rebellion and Insulate Britain, among its leaders. An organiser said there was no precise count of current supporters, but insisted the number was ‘growing week by week’.

Among them is Dr Larch Maxey, 50, an academic who was arrested on suspicion of causing public nuisance after emerging from the tunnel beneath Stoneness Road in Thurrock on Sunday. He had left a colleague in the tunnel but they, too, abandoned the burrow yesterday. A second group in a tunnel under nearby St Clements Way say they are determined to remain until the Government changes its environment policies.

Dr Maxey said: ‘I was in the tunnel for six days. It was very empowering to be able to do something that actually made a big difference. The Government are showing their true colours [by letting through oil tankers over their heads]. They are putting the interests of big oil above ordinary people struggling to pay their bills.’

The group, which is planning mass blockades in central London in October, wants the Government to end all new licences for the exploration and production of fossil fuels in the UK. They said most of their funding comes from the Climate Emergency Fund, an LA-based organisation created by three millionaires in 2019.

Arrogance, self-righteousness and immaturity are among the many faults of the radical green agitators. To that list can be added a chronic lack of any sense of irony.

For at the very moment our country is desperate for cheaper energy, these radicals want to make the generation of power even more expensive by halting the use of oil and gas, as well as disrupting supply networks.

They bleat about ‘fuel poverty’ but their policies would inevitably lead to blackouts and further dramatic hikes in energy bills.

The ongoing protests at Thurrock in Essex are typical of their attention-seeking, self-indulgent style. Organised by the group Just Stop Oil – which now joins the green hall of infamy alongside the permanent adolescents of Extinction Rebellion and Insulate Britain – they are designed to halt deliveries of oil from the huge plant at the site.

The group did not entirely succeed in that goal, thanks to the Essex police, but other supply chains were stopped, including the local council’s refuse collection service and the distribution of newspapers, including this one, from the major printing facility at Thurrock. 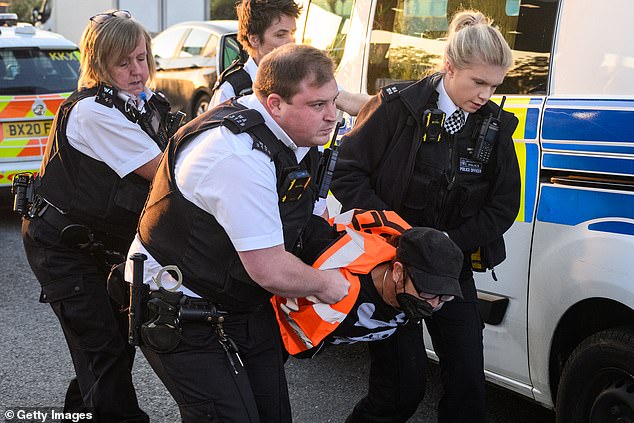 For at the very moment our country is desperate for cheaper energy, these radicals want to make the generation of power even more expensive by halting the use of oil and gas, as well as disrupting supply networks. Pictured: Officers arrest a Just Stop Oil protester at the petrol station

Winston Churchill once wrote that ‘a free press is the unsleeping guardian of every other right that free men prize’. But, according to police, this is not enough to have it classified as an ‘essential service’, so no attempt was made to clear the way for the Mail’s lorries on Sunday night.

What is so striking about the hardline green movement is the complete absence of any accountability.

A group like Just Stop Oil has no mandate to block lorries or vandalise petrol pumps – as they did last week – but their members think that the justice of their cause gives them the right to hold our nation to ransom.

And the Thurrock protest by Just Stop Oil is only part of a wider programme of mass chaos planned for the autumn. As Extinction Rebellion warns on its website, in early September there is to be major rally in central London, preceded by direct action stunts including a ‘Paint the Streets’ initiative.

This will then be followed in October by ‘the Big One’, another monster meeting in the capital which will be at the centre of ‘a prolonged period of disruption until the Government agrees to establish an independent Citizens’ Assembly on climate and ecological justice’.

The call for the Assembly will be accompanied by a drive to sign up at least 100,000 people for ‘major, non-violent, civil resistance’. In uncompromising tones, Extinction Rebellion states that ‘we will refuse to leave until our demands are met’.

The right to protest is a fundamental part of our civilisation. However the antics of Just Stop Oil and the other dogmatists go way beyond that. Their behaviour has shown that they are the enemies of freedom.

Thanks to activists who glue their hands to the tarmac of arterial routes, van drivers deliver their goods late, business people en route to airports miss their planes and children turn up late for school. 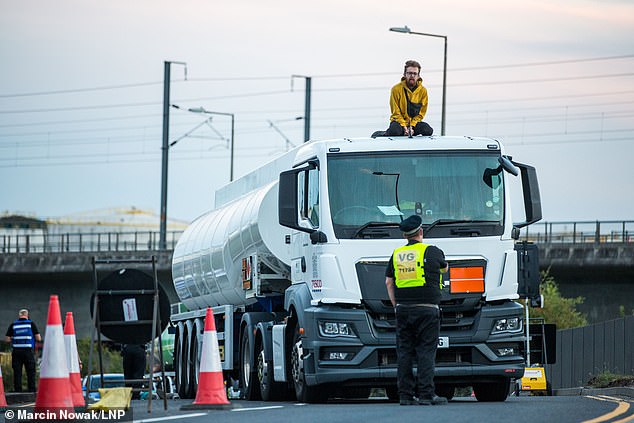 What is so striking about the hardline green movement is the complete absence of any accountability. Pictured: An activist from Just Stop Oil seen on top of a tanker in an attempt to block the main road to Oil Terminal in Grass, Essex

All too often police come across as being more concerned with the welfare of the protesters than the ordinary working people whose lives they make a misery.

In one video clip released online, a police officer tells a group of demonstrators: ‘If any of you need anything, just let us know.’

Not surprisingly, perhaps, furious motorists are sometimes tempted to take the law into their own hands. But anyone who makes any attempt to drag away protesters themselves is physically prevented from doing so by police officers.

Under legislation such as the Public Order Act or the ban on Obstructing a Public Highway, the police do have the authority to break up threatening demonstrations.

But the scenes at Thurrock at the weekend reinforced the need for the police to be given stronger powers to tackle these irresponsible, anti-democratic trouble-makers.

When Parliament returns, Tory MPs should unite to ensure that legislation imposing tougher sentences for their criminal behaviour is passed as soon as possible.

What is certain is that the wreckers cannot be allowed to gain the upper hand. In a country already gripped by an energy crisis, their outlook is a recipe for disaster and dislocation.