The Duke and Duchess of Sussex have arrived in Morocco’s Atlas Mountains and are meeting young women receiving secondary education thanks to a British entrepreneur.

Pupils at a boarding school welcomed the couple to the town of Asni before they took part in a traditional henna ceremony.

Meghan was later photographed with a temporary flower tattoo on her hand – reportedly to celebrate her pregnancy.

The teenagers at the school run by Education For All, which was founded by Michael McHugo, greeted the royals with Union and Morocco flags as they arrived from the capital Rabat by helicopter. The girls at the school are from the north African nation’s remote mountain communities and would normally not be able to afford to go to school after primary education.

Prince Harry, 34, and the former Suits star, 37, walked along a line of waiting pupils and greeted them traditionally by touching a hand to their heart each time they shook the girls’ hands. Meghan was dressed casually in a navy coat and black skinny jeans while her husband wore a light grey half zip jumper and dark grey jeans.

As they were taken inside, the duke asked one student “is this the best school in Morocco?” and he placed his hand reassuringly on his heavily pregnant wife’s back. 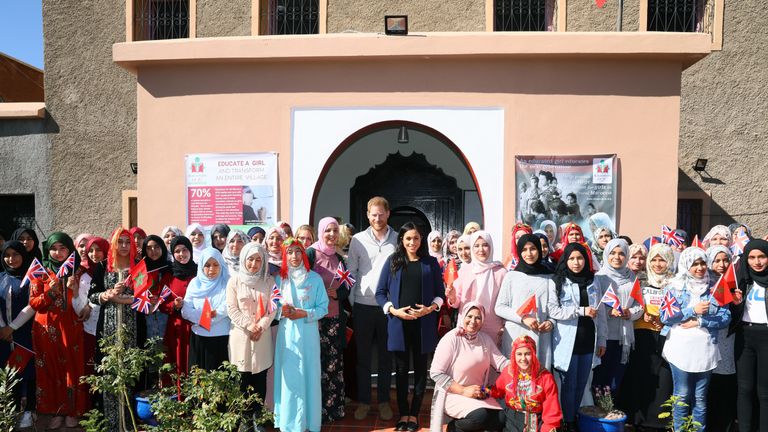 The three-day trip is expected to be Meghan’s last overseas trip before giving birth to the couple’s first child in April.

It comes after a busy few days for the duchess who spent most of last week in New York with her friends for an opulent baby shower.

Harry and Meghan were greeted by a guard of honour as they flew into Casablanca on Saturday for their second major overseas tour, on behalf of the government and the Foreign Office.

With Meghan’s baby due in a matter of weeks, palace officials confirmed that medical provisions had been made.

It is not unusual for doctors to travel as part of the royal party, although officials did not go into detail.