We MUST plant more trees to save the planet: Prince Charles backs Mail campaign for a greener Britain

Prince Charles has warned that we must plant more trees to stop climate change – heralding the biggest change to our countryside in decades.

He said there is a ‘major opportunity’ to help lock up the greenhouse gas carbon dioxide and prevent global warming.

But the prince said we must not return to the ‘bad old days’ of planting vast acres of ‘dark forbidding’ forest with a single species.

The royal’s comments are a major boost to the Daily Mail’s Be a Tree Angel campaign, which we announced yesterday and will encourage our caring army of readers to plant thousands of trees to make Britain greener. 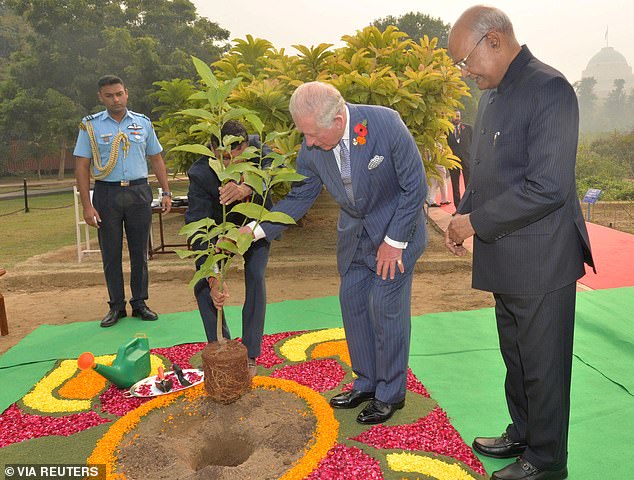 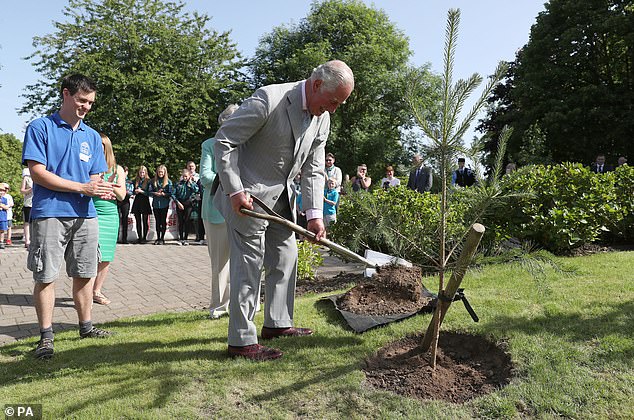 The Prince of Wales, known as the Duke of Rothesay while in Scotland plants a Scots Pine tree during his visit to the Castlebank Park and Horticultural Centre in Lanark in June

Writing in Country Life, Prince Charles warned of an ‘alarmingly changing climate’ – but said the countryside can lead efforts to prevent global warming. He said: ‘The biggest problem we face is the pace and scale of the changes to our climate. The past five years have been the warmest five years recorded, as have 20 of the past 22.

‘As the world warms, what were once extreme weather events – storms, heavy rain, extreme heat and drought – become a feature of everyday life, as do the dire human and natural consequences as we have recently witnessed in California.’ He added: ‘Trees provide the perfect mechanism for locking away carbon dioxide.

‘They also provide excellent building material, fuel, shade and give structure to the landscape.

‘But I hope we will resist the temptation to return to the bad old days of blanket afforestation, using a single species of tree to cover vast acres with dark, forbidding forests.

‘We need to think carefully indeed about the mix of species we plant and be clear about the full range of benefits we should be seeking.’

He added that we should aim to plant native trees that tend to benefit wildlife more. Some 300 insect species are associated with oaks, while the horse chestnut – which was introduced to the UK from Europe in the 1600s, has only four. ‘And the invasive non-native rhododendron has none,’ said Charles. He also said that it is just as important to protect trees as to plant them. He added: ‘Propagating trees is something that Nature does very well, when given the chance, and the result is both more diverse and more natural than most planting schemes.’ 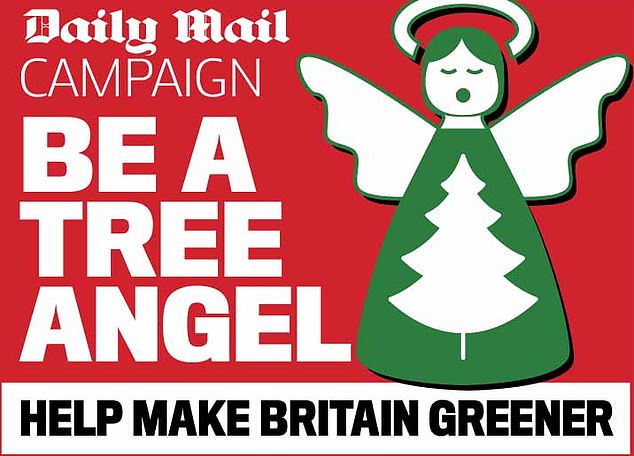 As well as locking up carbon dioxide, a forested countryside can soak up water – a form of ‘natural flood management’ – giving it more time to return to underground aquifers, the prince said.

The prince said he dislikes the term ‘biodiversity’ – which he calls an ‘obscure and technocratic word to describe the whole complex web of interconnected life… which, by our actions or inaction, we are now rapidly driving to extinction’ – and prefers to use the word ‘Nature – with a capital N’.

AND THEY CAN EVEN SAVE THE NHS CASH

Growing more trees could even take pressure off the NHS, health experts have warned.

Tree-lined areas can reduce the impact of heatwaves by keeping towns and cities cooler, as well as reducing air pollution while benefiting mental health and wellbeing, according to a major report.

The warnings are issued in the 2019 Lancet Countdown on Health and Climate Change, which said many of the worst health impacts are suffered by children and pensioners. Elizabeth Robinson, Professor of environmental economics at Reading University, said there was a ‘clear upward trend’ in the number of people exposed to heatwaves – which can cause heat stress, heat stroke, acute damage to kidneys, exacerbate congestive heart failure and increase the risk of violence and suicide.

But she said the UK is ‘well below’ the government’s own tree targets and needs to plant around 30,000 hectares of woodland per year to meet recommendations.

The prince’s comments come as he took part in a two-day visit to India with a focus on shared challenges such as climate change. The royal, who celebrates his 71st birthday today, was ferried around by electric rickshaw in New Delhi and also planted a tree at the presidential palace.

The Prince of Wales has become increasingly vocal on the subject of global warming. He co-authored a Ladybird Book on the subject two years ago warning of its ‘devastating’ consequences. Earlier this year the heir to the throne warned global leaders they had 18 months to solve climate change – otherwise the survival of the human race is in peril. In a series of 70 facts released about Charles on his personal website to mark his 70th birthday, it revealed how he ‘often carries out tree planting ceremonies during engagements. After planting each tree, HRH gives a branch a friendly shake to wish them well’.

The prince’s comments are supported by green campaign groups who want reforms to existing laws and farmers to be given more financial incentives to protect the environment. Landowners currently get taxpayer-funded assistance based on the size of their farms, rather than how they manage the land, leading to drastic declines in wildlife and the natural environment. Green groups are calling for new laws to provide more support for farmers who plant trees and hedgerows, and restore natural habitats.

Benjamin Halfpenny, from Greener UK, said: ‘All parties should commit to a new funding system that rewards farmers for providing public benefits, such as creating woodland, restoring wildflower meadows and providing richer habitats for nature.’