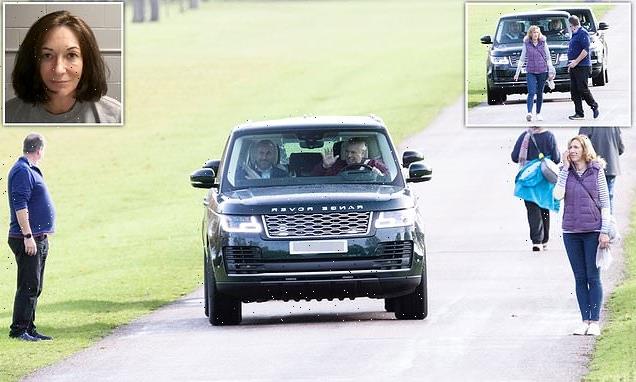 Move along! Prince Andrew waves to pedestrians as they’re forced onto the verge of Windsor’s Long Walk so he can drive past in his Ranger Rover… just days after his ‘dear friend’ Ghislaine Maxwell dragged him back into Epstein scandal

Prince Andrew offered a thankful wave to pedestrians today, as they moved aside to allow his Range Rover through as the fallout from Ghislaine Maxwell’s interview continued.

The disgraced Duke, 62, was all smiles as he was seen again in his Range Rover driving in Windsor.

As he continued down the stretch the way forward was impeded by two walkers who had little idea of his presence behind them.

But they eventually clocked him and stepped aside, prompting a wide smile and wave from under-fire Andrew.

The Royal, seen later grinning on a horse, had looked ashen faced yesterday as he was seen with ex-wife Sarah Ferguson – hours after Jeffrey Epstein’s conspirator Ghislaine Maxwell called him a ‘dear friend’.

Her bombshell comments – in a world-exclusive prison interview with The Mail on Sunday – contradict Andrew telling a US court that they had not been close.

And both the Duke and Duchess of York appeared glum as they were seen in public driving through Windsor on the day after Sarah’s birthday.

The remarks by Maxwell, 60 – a convicted sex-trafficker described in court as a ‘sophisticated predator’ – land a devastating blow to the Duke’s hopes of returning to public life. 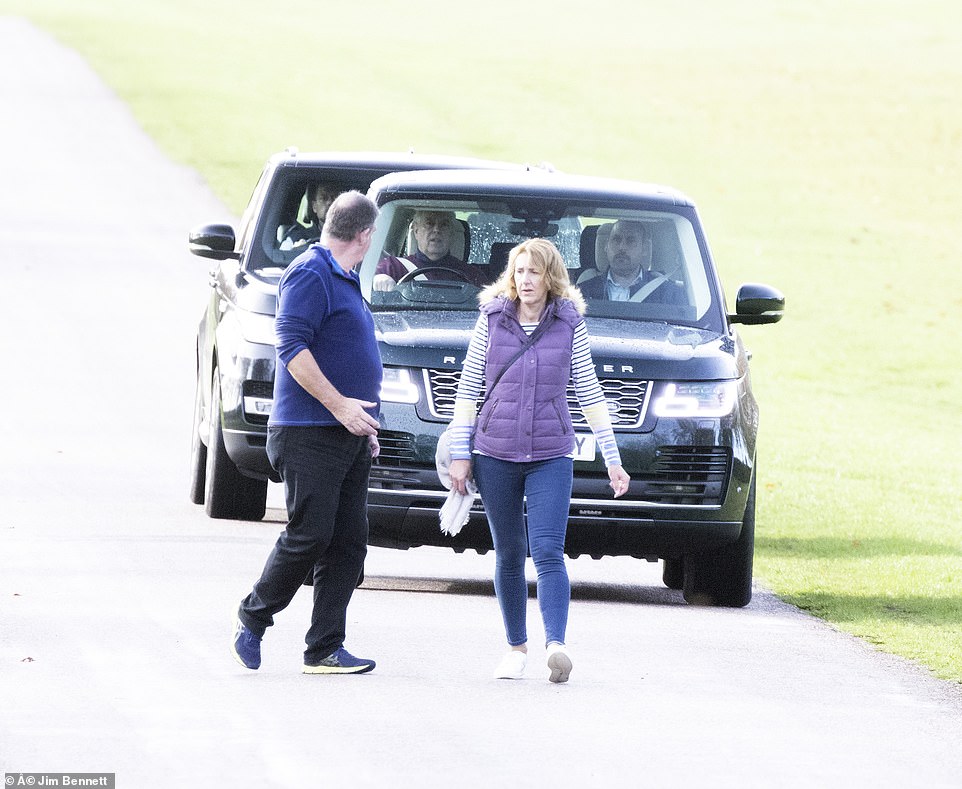 He’s behind you! Walkers in Windsor get a surprise as Prince Andrew appears at the wheel at their backs during their stroll 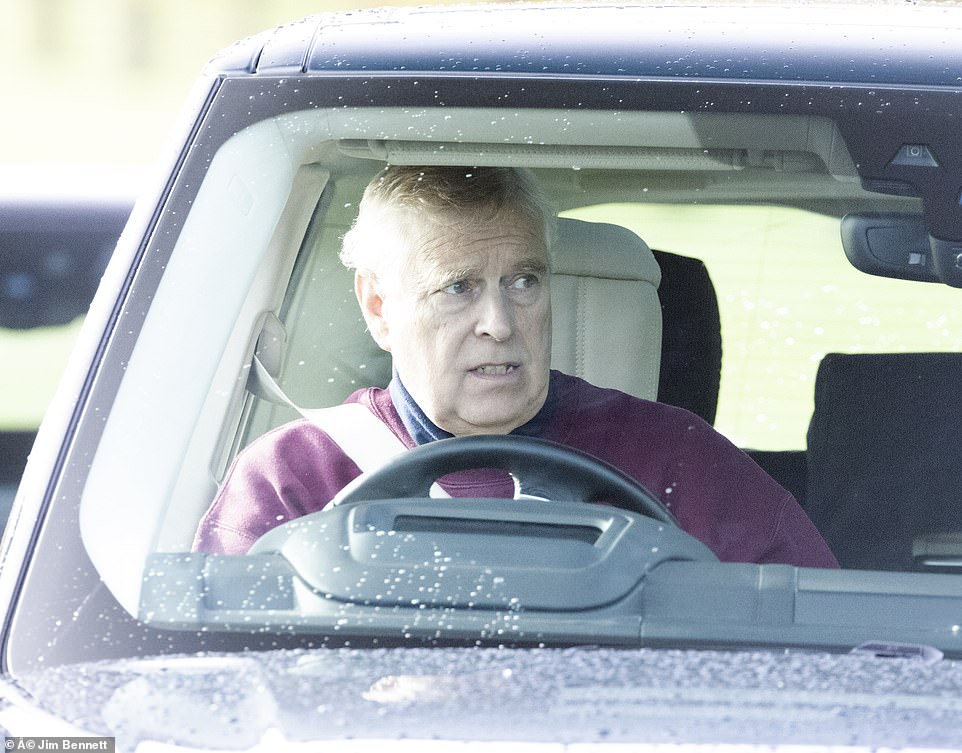 Andrew, who sported a burgundy pulloever, looked perturbed at one point as his Range Rover journey continued today 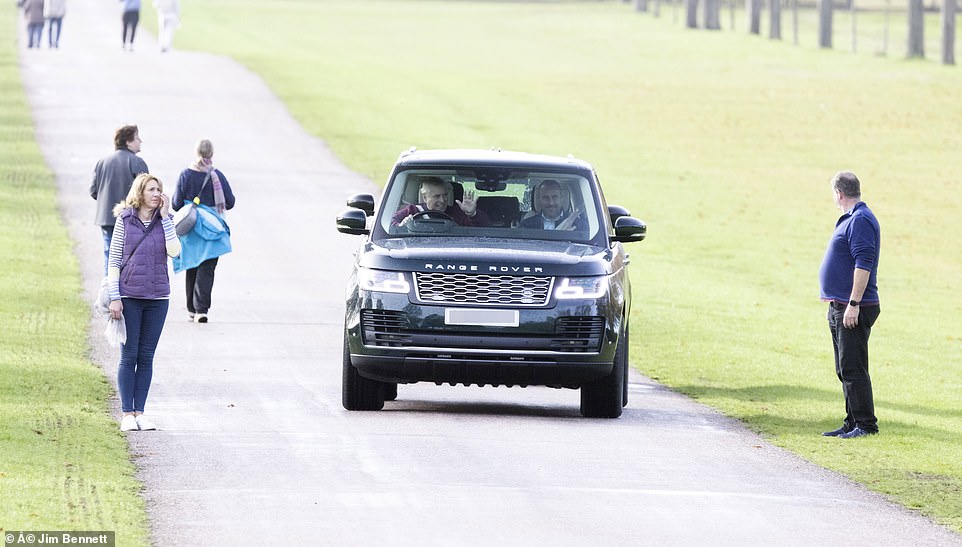 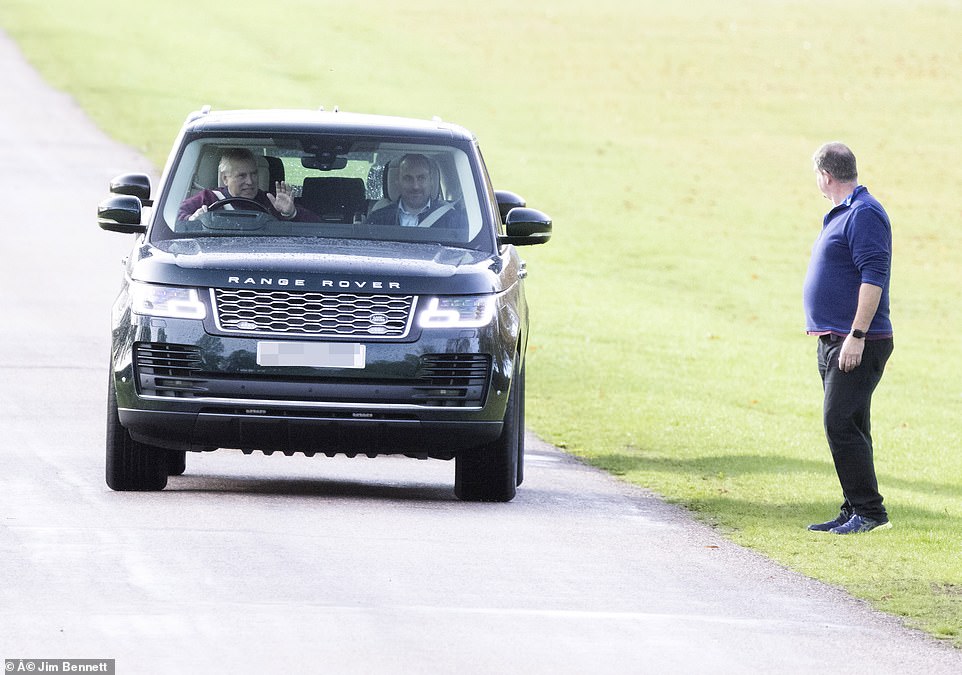 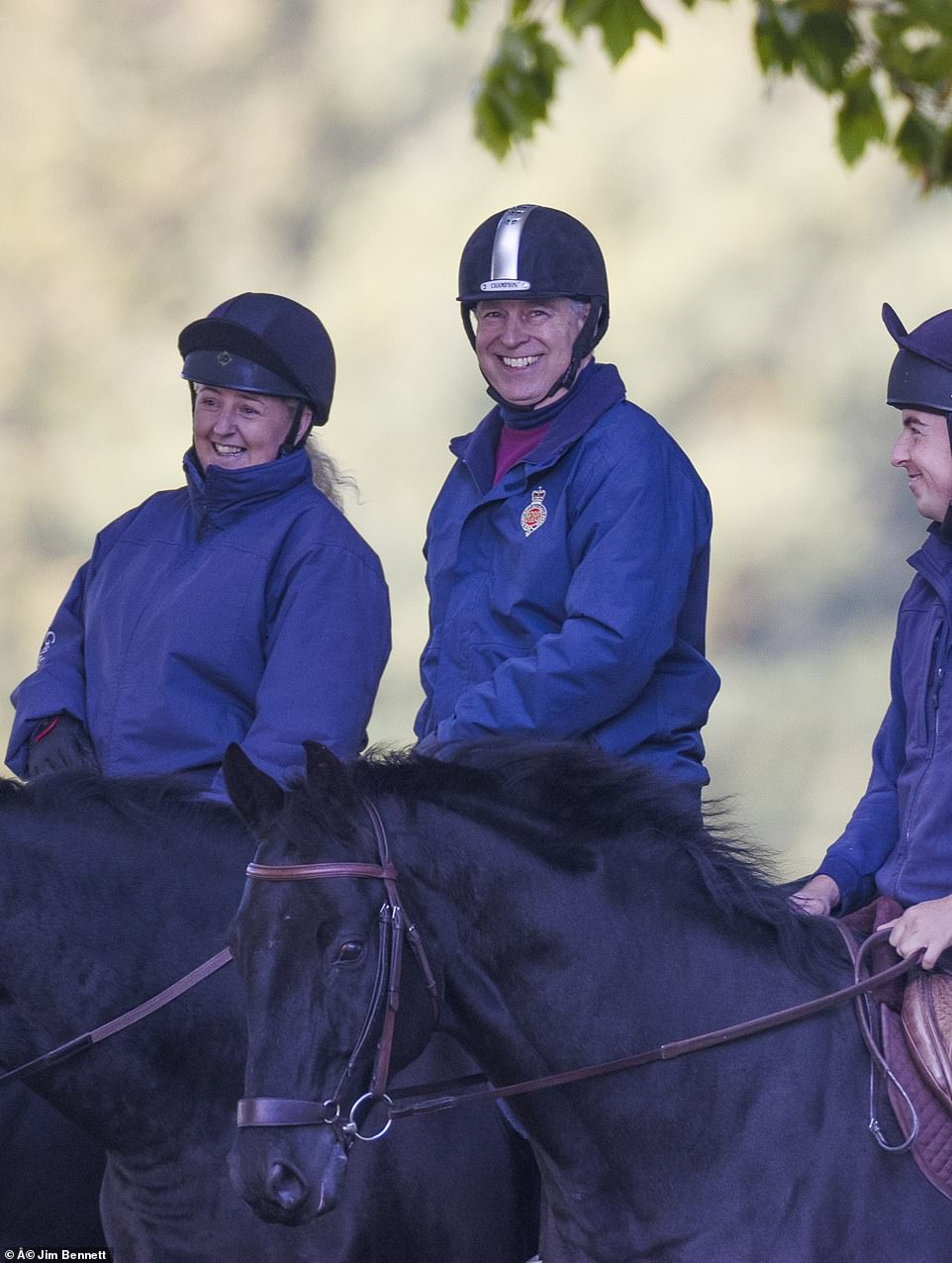 Back in the saddle again: Prince Andrew is all smiles on top of a horse as he enjoys the thrills of yet another riding session

Maxwell, who was convicted of helping Epstein abuse teenage girls, failed to deny suggestions that she and Andrew had been a couple, and declared: ‘I care about him.’

Her remarks come as the MoS reveals a new photograph today of the disgraced former socialite taken at the Metropolitan Detention Center (MDC) in New York this year before she was moved to a prison in Florida to serve her 20-year sentence.

Andrew was stripped of his military titles and royal patronages in January as he fought allegations that he abused Ms Roberts, one of Epstein’s victims, as a teenager in London, Manhattan, and the US Virgin Islands.

He has repeatedly and vehemently denied the claims. He settled out of court with Ms Roberts, who now uses her married name Giuffre, for an undisclosed sum but made no admission of guilt.

A legal document submitted to a US court in January by the Duke’s lawyers contained 41 separate denials of allegations made by Ms Roberts, including her claim that ‘Prince Andrew was a close friend of Ghislaine Maxwell’.

But in her MoS interview, Maxwell spoke in glowing terms of her friendship with the Duke. ‘I feel so bad for him,’ said the disgraced former socialite, who has known Andrew since she was a student at Oxford University in the 1980s.

‘Yes, I follow what is happening to him. He is paying such a price for the association [with Jeffrey Epstein]. I consider him a dear friend… I care about him.’ 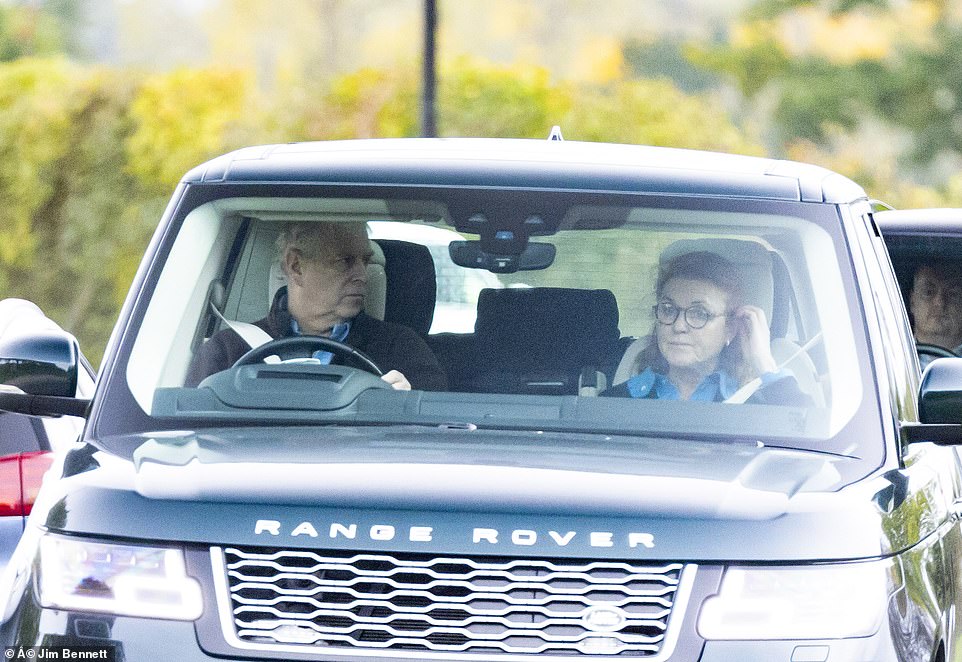 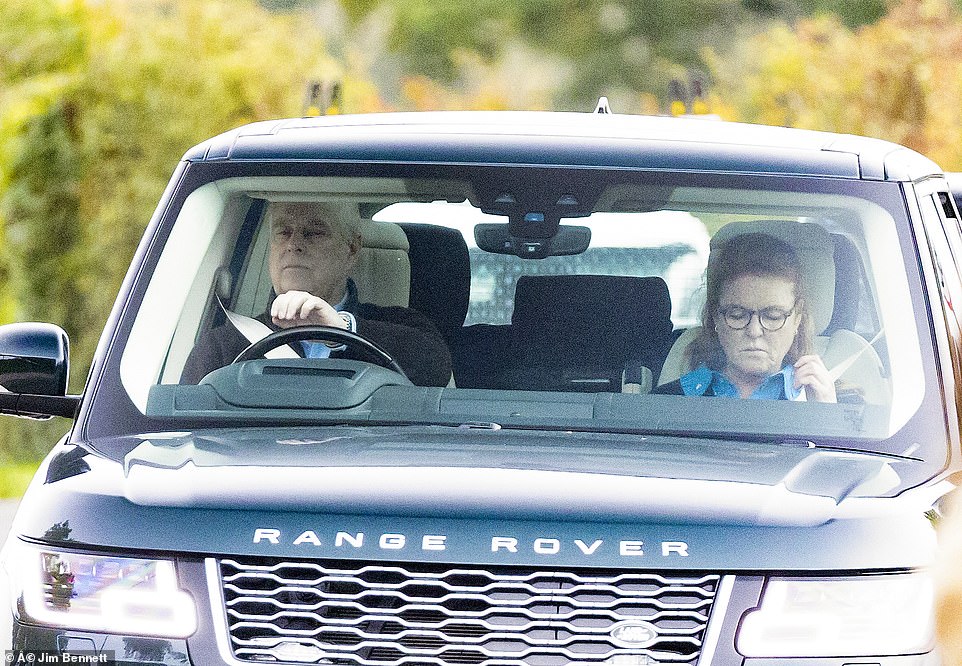 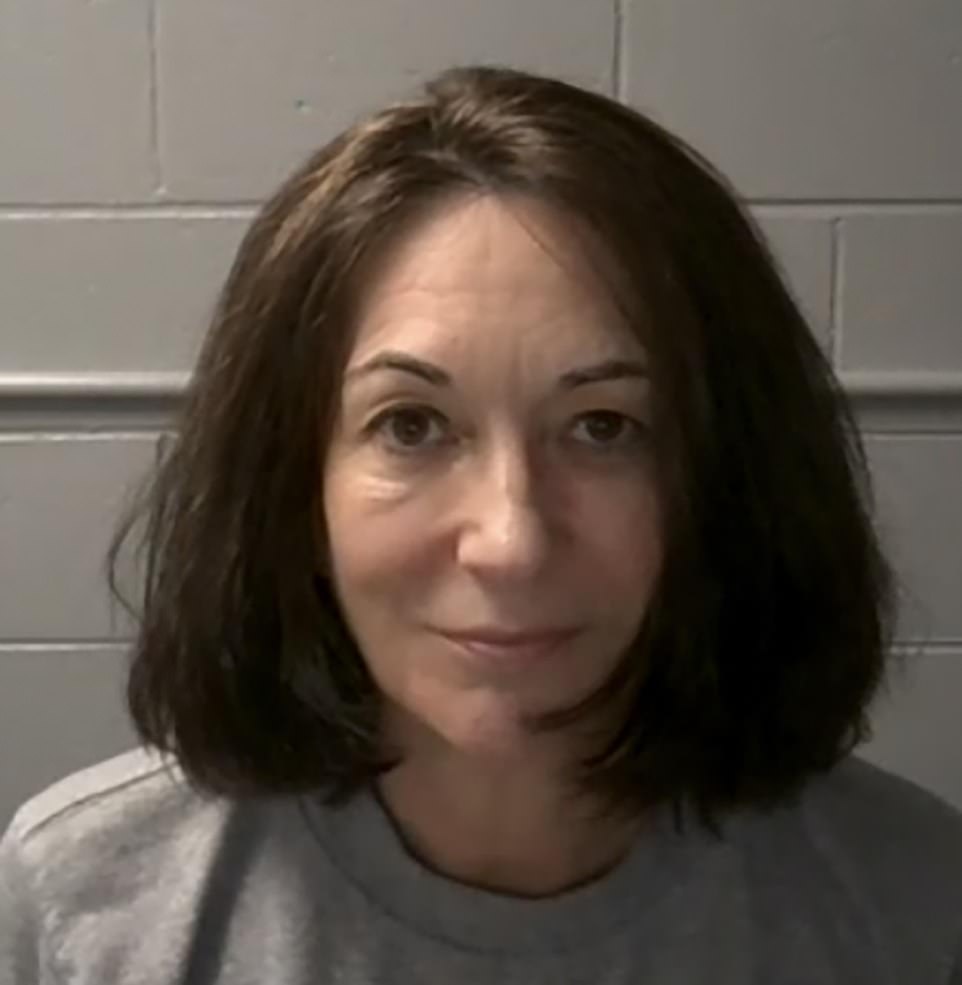 Ghislaine Maxwell stares at the camera in Brooklyn Prison, as revealed in the Mail on Sunday exclusive yesterday 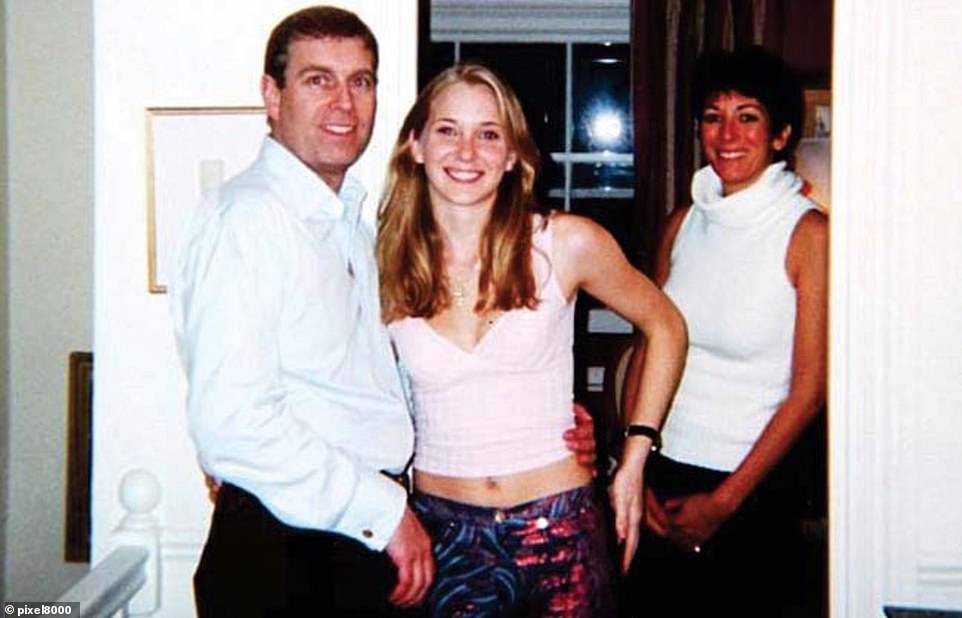 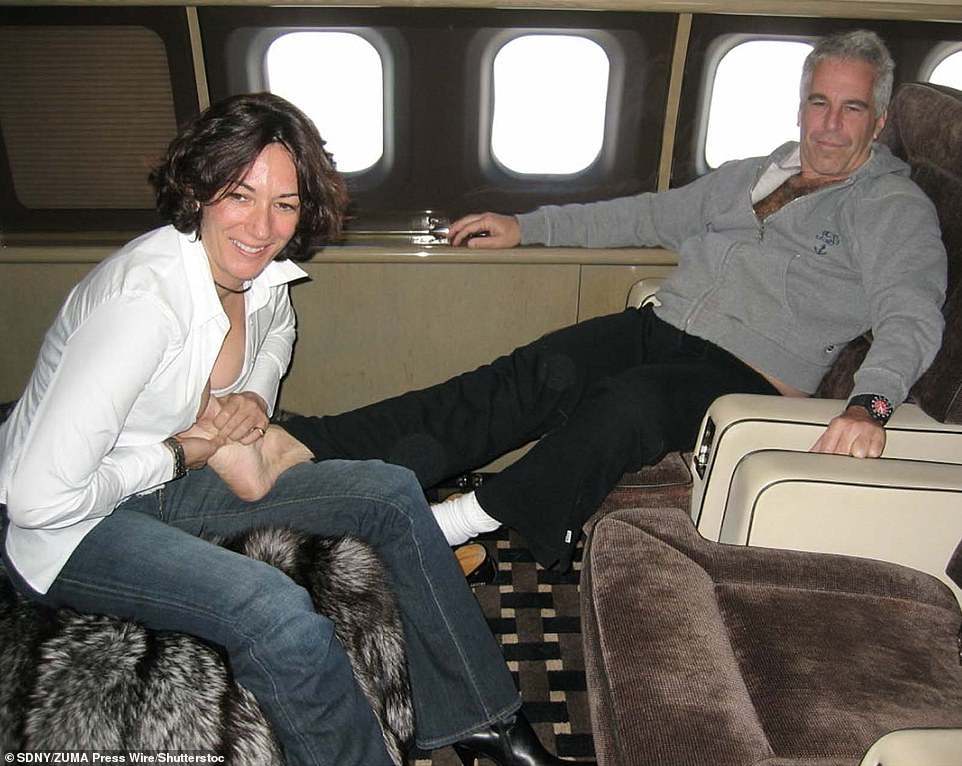 Maxwell, who was convicted of helping Epstein (pictured together) abuse teenage girls, failed to deny suggestions that she and Andrew had been a couple 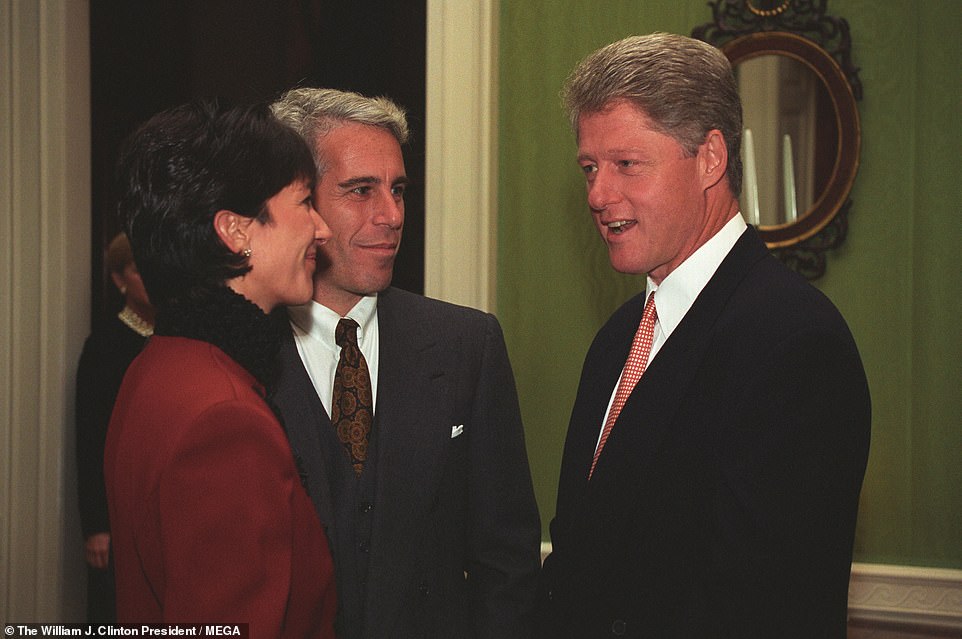 Maxwell was prepared to discuss her friendships with some of the rich and powerful men connected to her and Epstein, including former President Clinton (all pictured together) 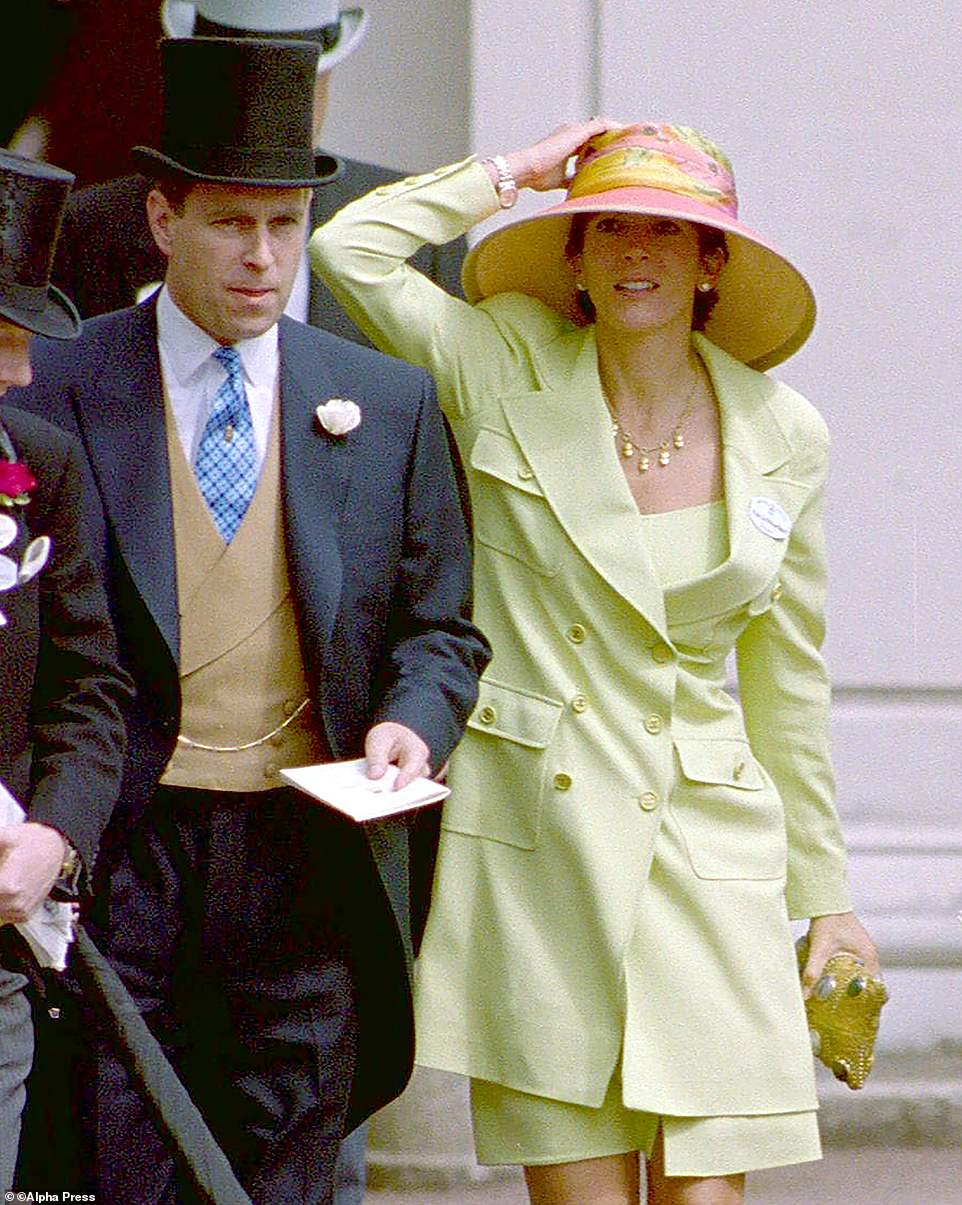 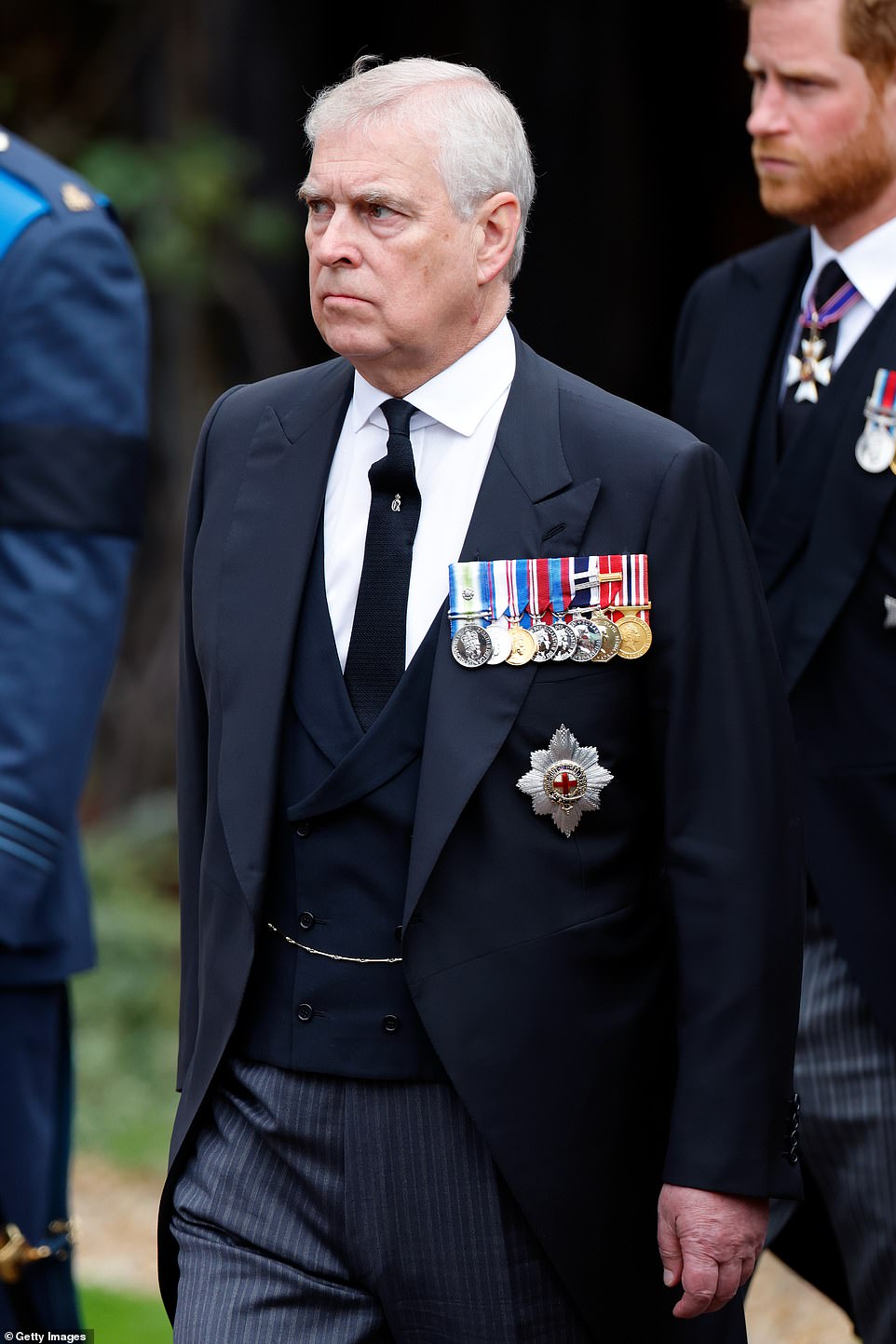 Prince Andrew has always denied claims that he abused Virginia Roberts, one of Epstein’s victims, but settled out of court with her

Quizzed on the denial by Andrew’s lawyers that they were close friends, Maxwell said: ‘I accept that this friendship could not survive my conviction.’

She dismissed a photograph, first revealed by this newspaper, of the Prince with his arm around Ms Roberts at Maxwell’s home in Belgravia, Central London, in March 2001, saying: ‘I don’t recognise that picture and I don’t believe it is a real picture. There’s so many things wrong with it. There is no original and there isn’t a true picture and there are that many other things besides that I cannot hardly get into… I don’t know how many points there are, but there are over 50 problems with the picture.’

Earlier this year, Euan Rellie, a former friend of Maxwell’s, told ITV he believed she and Andrew ‘had probably been girlfriend and boyfriend in the past’.

Asked about press reports that they were ‘like a couple, an item’, Maxwell said she would not address such speculation until after the appeal against her conviction. ‘I have read and seen and heard and had reported to me so many monstrous inaccuracies that I can’t start to pick apart all of them. If I pick apart one and then don’t address all the others, it’s going to say, ‘Well, she said no to this, what about all those others?’ I’m not going to discuss anything of that nature until after the appeal.’ 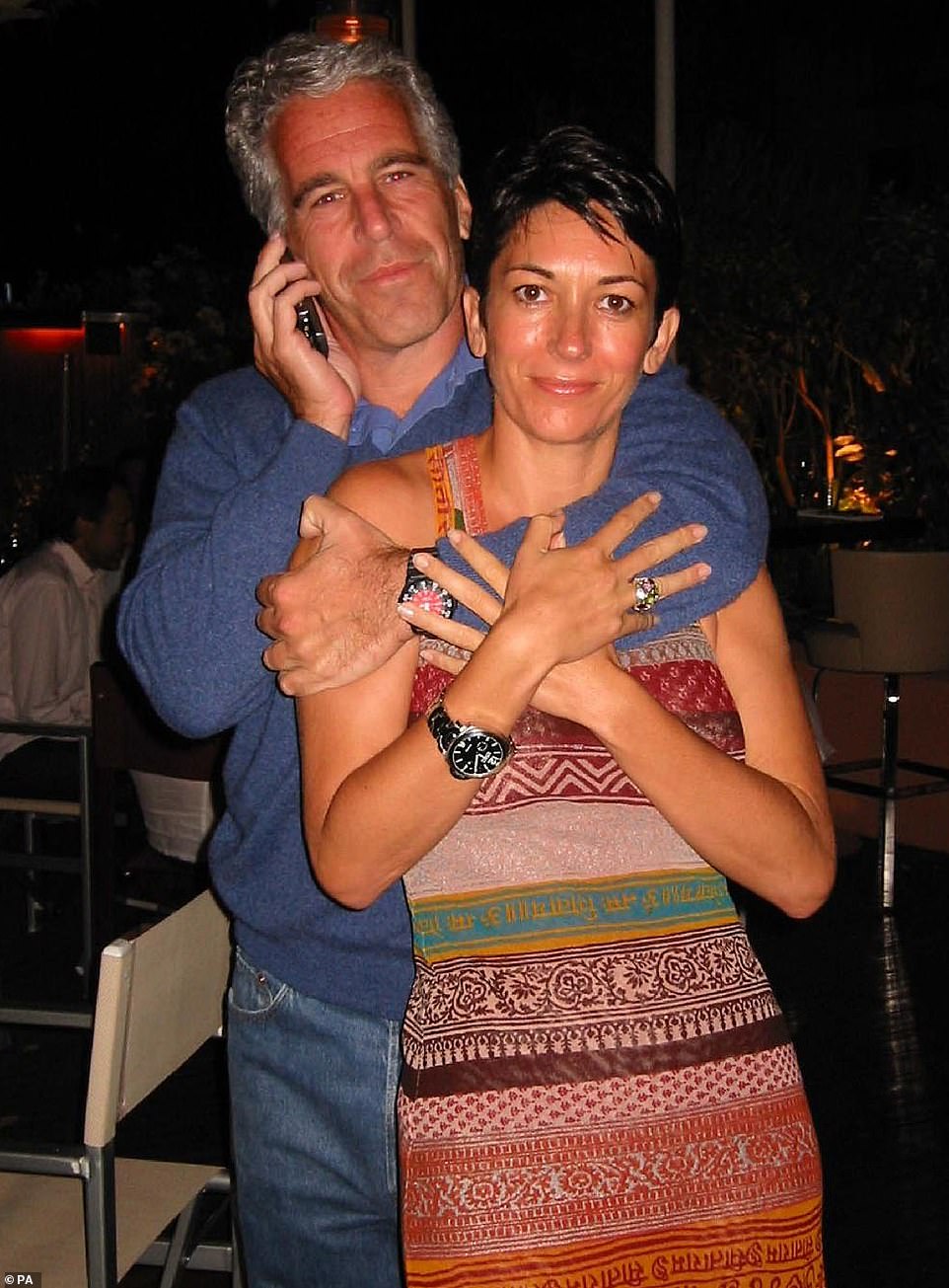 Maxwell, pictured with Epstein, complained she has been portrayed as a ‘wicked witch’ Disney character and accused the media of ‘monstrous inaccuracies’

The MoS interviewed her on June 22 this year at the MDC, six days before she was sentenced, and then weeks later after she was moved to the Federal Correctional Institution in Tallahassee, a low-security jail in Florida.

She was prepared to discuss her friendships with some of the rich and powerful men connected to her and Epstein, including former President Clinton.

‘It was a special friendship, which continued over the years,’ she said of Clinton. ‘We had lots in common. I feel bad that he is another victim, only because of his association [with Epstein].’

She also spoke of her gratitude to former President Trump, who bestowed his good wishes on her after her arrest.

‘I was very grateful when he wished me well. He got bad media for it, but he dared while others didn’t. It gave me a big boost.’

Maxwell said the food at the MDC was ‘truly terrible’ and she was once so hungry she ate Vaseline. She is now in a cell measuring 10ft by 8ft that is too small for her and her three cellmates to all stand up in. ‘It’s very far from a cushy country club,’ she said.

After Epstein killed himself as he awaited trial, prison bosses put her on suicide watch prior to her sentencing. Maxwell, who said she had never contemplated taking her own life, described wearing an anti-suicide smock – a long tunic made of thick nylon – adding: ‘They strip you of any remaining shred of dignity that you have. They have you with no clothes, and they put you in a suicide smock, which has Velcro straps on it. So there’s nothing to protect your modesty.’

The MoS revealed in June that a fellow inmate at the MDC had bragged she was going to murder Maxwell, claiming that there was a $1 million bounty on her head. Maxwell this weekend confirmed that a woman had threatened to murder her as she slept.

Maxwell now works in the prison’s legal library, where she helps other inmates with their cases.