London: Prince Andrew was given more than a million pounds by an alleged Turkish fraudster and is now embroiled in a High Court battle over missing money.

Andrew and his former wife, Sarah, Duchess of York, both received “suspicious” payments on the orders of Selman Turk, a former Goldman Sachs banker, as part of an international £40 million ($70 million) fraud, it is alleged. 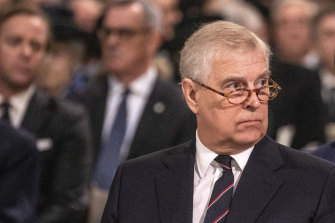 Prince Andrew at the memorial service for his father.Credit:POOL The Times

This included a £750,000 “gift” paid to the Prince by Nebahat Evyap Isbilen, a 76-year-old Turkish millionairess, who was told that she was paying for help with a passport so she could flee political persecution in her homeland.

The first payment was made days after Turk won an award at the Prince Andrew’s [email protected] competition at St James’ Palace.

Isbilen has told the High Court that she believes the payment to Andrew was connected to Turk’s appearance at the event.

Further payments linked to Turk of £350,000 were made to Andrew through a third-party account that also gave £225,000 to the Sarah Ferguson. 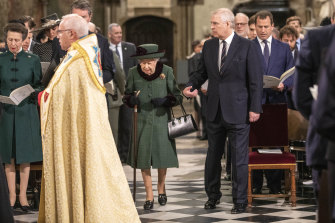 Britain’s Queen Elizabeth II and Prince Andrew arrive for a Service of Thanksgiving for the life of Prince Philip, Duke of Edinburgh, at Westminster Abbey in London.Credit:AP

The revelation comes days after Andrew escorted the Queen at a memorial service for his father, Prince Philip, in what was seen as an attempt to begin a rehabilitation of his image.

It also comes weeks after he paid a purported £12 million to settle a case with his sex abuse accuser.

Isbilen is pursuing Turk and various businesses associated with him in the High Court for the return of an estimated £40 million.

Jonathan Tickner, head of fraud and commercial disputes at Peters and Peters, who is representing Isbilen, last night said she was the victim of a “serious fraud” and was “determined to prosecute her claims against all those involved”.

The £750,000 was transferred to Andrew on November 15, 2019, days after he presented Turk with a “people’s choice award” for Heyman AI, a digital bank aimed at millennials that went bust a year and a half later.

Court documents show that Tickner wrote to Andrew in March last year, but he “declined” to respond to questions or give any account of his relationship with Turk. He has repaid the £750,000.

In her witness statement, Isbilen said she had attended the [email protected] event, which she believes may have been at the invitation of Turk. “I can only wonder if there is any connection between this event and the Duke of York transfer,” she said.

Turk’s claim that she needed to pay the Prince for her passport “or for any other purpose” was “false”, details of the High Court civil claim reveal. 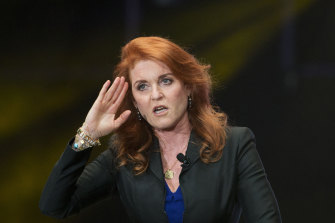 Since the case began, her legal team has secured court orders allowing it to search Turk’s bank accounts and those of companies linked to him, which have revealed the further payments to Prince Andrew and Sarah.

Andrew received transfers of up to £350,000 in regular instalments through Alphabet Capital. Tickner said in documents lodged with the court: “The pattern of payments is… consistent with a calculated attempt to facilitate transfers to Prince Andrew and to mask the source of funds.”

He said that “given the circumstances” of the £750,000 payment, and the timings and references of the payments to Andrew and Sarah, there are “strong grounds for inferring” the payments were all made at Turk’s direction.

Ferguson received payments after she was announced as a brand ambassador for Pegasus Group Holdings, a renewable energy firm, in July 2019.

Bank records show that on November 28 2019, £19,000 was transferred to Turk from Las Vegas-based Pegasus, under the reference “Duchess fee pop service”.

At least £225,000 was transferred to an account in the name of Ferguson from Alphabet in regular instalments, and in most cases under the reference “PEG001”, documents allege.

Alphabet was described as “a fraudulent and covert front” in court documents to make payments to those “associated” with Turk, including Andrew, and Isbilen says that she had no knowledge of them.

The Turkish woman said she had trusted Turk “completely, if not blindly” with the management of almost all of her financial affairs after he helped her flee Turkey at a time when she feared she would be arrested and have $US90 million in assets seized.

Ilhan Isbilen, her husband and the former deputy of the ruling AK party, was imprisoned in 2015 after an attempted coup in the country.

Isbilen said she was still in the dark about the extent of her losses but alleges that Turk may have caused her “as much £39.37 million of loss”.

Turk, who has a worldwide freezing order on his assets and has surrendered his passport, denies the allegations against him.

The case involves a complex web of businesses and payments to accounts set up in the UK and abroad, including the Cayman and British Virgin Islands.

David Halpern QC, sitting as a Deputy High Court Judge, granted a search of his premises earlier this month saying there was a “strong prima facie case” for “major fraud” through “undue influence by a trusted adviser over a woman who was vulnerable because of her age, her inability to speak English and her status as a refugee from abroad, and who trusted him as if he were a family member”. The Prince declined to comment when he was approached by The Telegraph.

A spokesman for Sarah Ferguson said: “The Duchess was completely unaware of the allegations that have since emerged against Mr Turk. She is naturally concerned by what has been alleged against him.”

Tickner said: “Mrs Isbilen is the victim of serious fraud and financial wrongdoing carried out at the hands of Selman Turk, a man she trusted to help her through extremely difficult circumstances. He abused her trust and she has brought her claim in the High Court to recover the money taken from her.

“The court documents and decisions given in her case to date speak for themselves. She is determined to prosecute her claims against all those involved.”