MARIUPOL, Ukraine (AP) — A pregnant woman and her baby have died after Russia bombed the maternity hospital where she was meant to give birth, The Associated Press has learned. Images of the woman being rushed to an ambulance on a stretcher had circled the world, epitomizing the horror of an attack on humanity’s most innocent.

In video and photos shot Wednesday by AP journalists after the attack on the hospital, the woman was seen stroking her bloodied lower abdomen as rescuers rushed her through the rubble in the besieged city of Mariupol, her blanched face mirroring her shock at what had just happened. It was among the most brutal moments so far in Russia’s now 19-day-old war on Ukraine.

The woman was rushed to another hospital, yet closer to the frontline, where doctors labored to keep her alive. Realizing she was losing her baby, medics said, she cried out to them, “Kill me now!”

Surgeon Timur Marin found the woman's pelvis crushed and hip detached. Medics delivered the baby via cesarean section, but it showed “no signs of life,” the surgeon said.

Then, they focused on the mother. 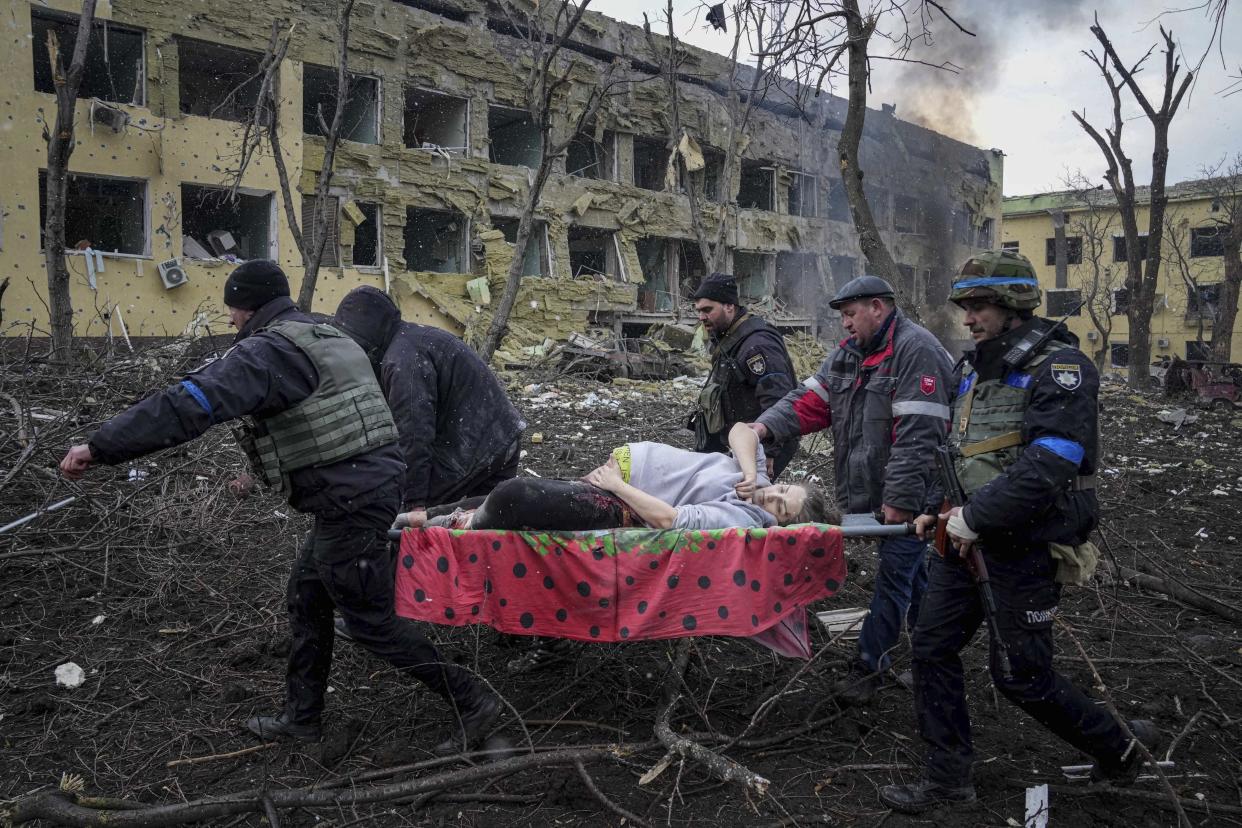 In the chaos after Wednesday’s airstrike, medics didn’t have time to get the woman’s name before her husband and father came to take away her body. At least someone came to retrieve her, they said — so she didn’t end up in the mass graves being dug for many of Mariupol’s growing number of dead.

Accused of war crimes, Russian officials claimed the maternity hospital had been taken over by Ukrainian extremists to use as a base, and that no patients or medics were left inside. Russia’s ambassador to the U.N. and the Russian Embassy in London called the images “fake news.”

Associated Press journalists, who have been reporting from inside blockaded Mariupol since early in the war, documented the attack and saw the victims and damage firsthand. They shot video and photos of several bloodstained, pregnant mothers fleeing the blown-out maternity ward, medics shouting, children crying.

The AP team then tracked down the victims on Friday and Saturday in the hospital where they had been transferred, on the outskirts of Mariupol.

In a city that's been without food supplies, water, power or heat for more than a week, electricity from emergency generators is reserved for operating rooms.

As survivors described their ordeal, explosions outside shook the walls. The shelling and shooting in the area is sporadic but relentless. Emotions are running high, even as doctors and nurses concentrate on their work.

Blogger Mariana Vishegirskaya gave birth to a girl the day after the airstrike, and wrapped her arm around newborn Veronika as she recounted Wednesday’s bombing. After photos and video showed her navigating down debris-strewn stairs and clutching a blanket around her pregnant frame, Russian officials claimed she was an actor in a staged attack. 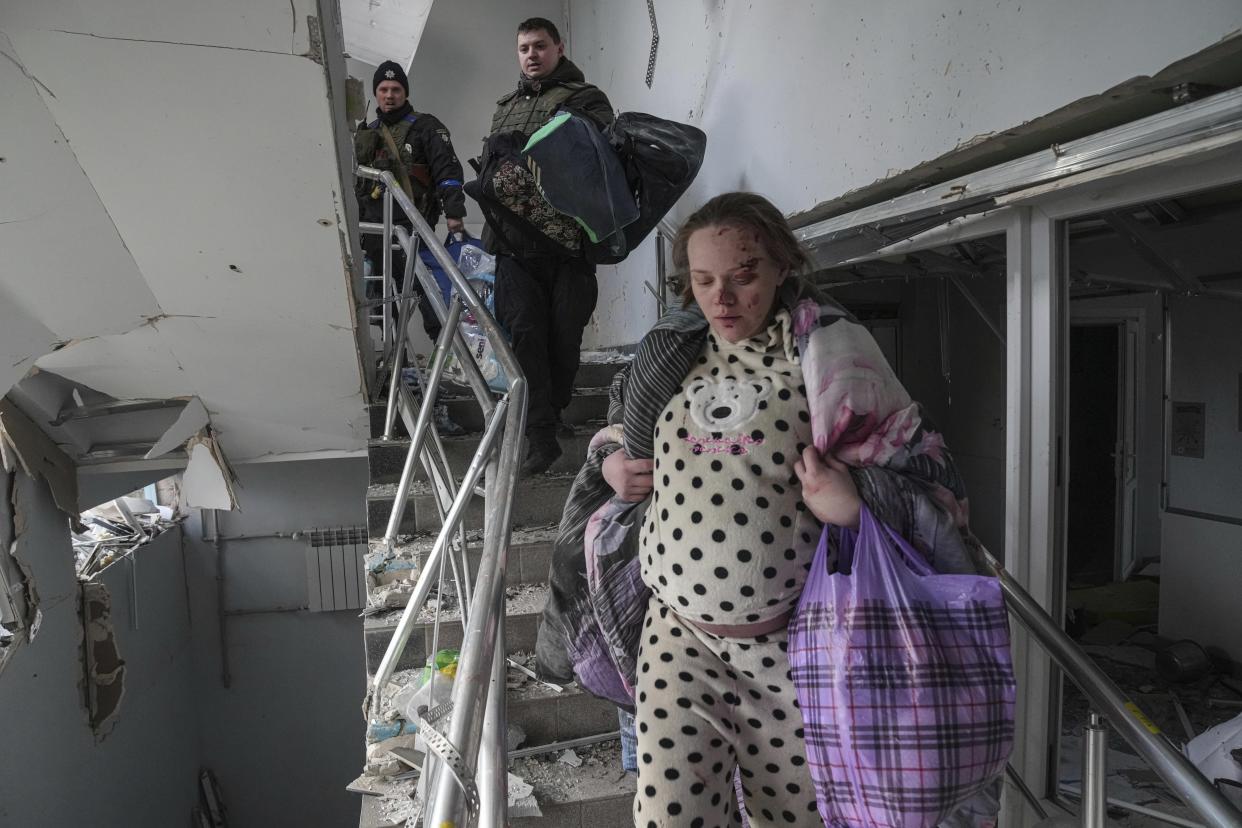 “It happened on March 9 in Hospital No. 3 in Mariupol. We were laying in wards when glasses, frames, windows and walls flew apart,” Vishegirskaya, still wearing the same polka dot pajamas as when she fled, told The AP.

“We don’t know how it happened. We were in our wards and some had time to cover themselves, some didn’t.”

Her ordeal was one among many in Mariupol, which has become a symbol of resistance to Russian President Vladimir Putin's drive to crush democratic Ukraine and redraw the world map in his favor. The failure to subordinate Mariupol haspushed Russian forces to broaden their offensive elsewhere in Ukraine.

Meanwhile, the Azov Sea port city of 430,000, key to creating a land bridge from Russia to Russian-annexed Crimea, is slowly starving.

“All birthing mothers have lived through so much,” said nurse Olga Vereshagina.

One of the distraught mothers lost some of her toes in the bombing. Medics performed a C-section on her Friday, carefully pulling out her daughter and rubbing the newborn vigorously to stimulate signs of life.

After a few breathless seconds, the baby cries.

Cheers of joy resonate through the room. Newborn Alana cries, her mother cries, and medical workers wipe the tears from their eyes.