Jakarta: I can still hear his cries when I fall asleep at night sometimes.

Trapped in the ruins and the mud of a house in Petobo, on the edge of Palu, his owners nowhere to be seen – and very likely dead – a tiny orange kitten, fur matted and muddy, crying out to be saved. 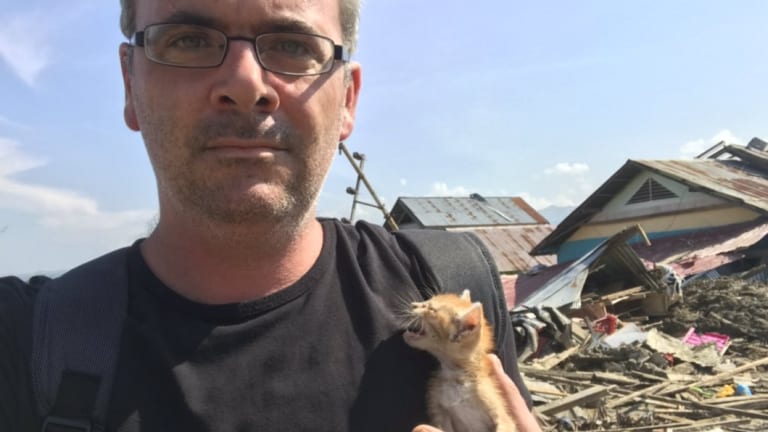 Correspondent James Massola holds kitten he rescued from a house in Petobo, Indonesia.

More than four days after the central Sulawesi city was flattened by an earthquake and tsunami, the official death toll was inching up towards 1000.

Unofficially, perhaps another 5000 people were thought to be missing – presumed dead – in the ruins. 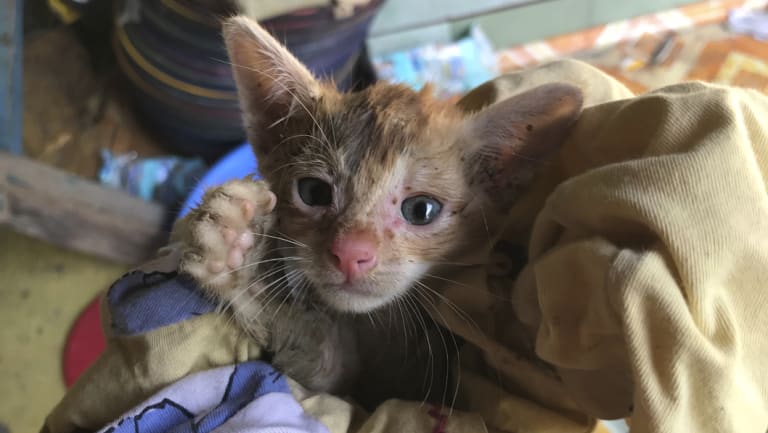 No one will ever know for sure because the worst hit places will simply become mass graves.

In Palu I saw and smelled many corpses.

But amid all the death and destruction, at 9am on the fifth day after the earthquake hit, all I could focus on was that crying kitten.

I was perhaps only 50 metres away from him; its tiny 'miaow, miaow' rang out through the morning air, and though I couldn't see it, I had a bead on which house it was trapped in. 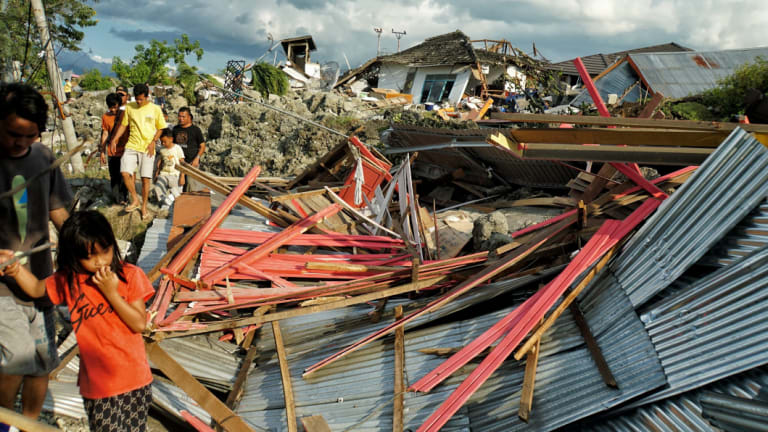 Between the little kitten and I was an ocean of liquefied mud which had just about swallowed this part of Petobo whole.

Some houses had disappeared others were buried only a metre deep .

Journalists are supposed to, at all times, maintain a critical distance from their subjects, observing and reporting rather than participating.

But in a matter of metres I was almost up to my waist in the awful, fetid, corpse-ridden mud.

I didn't panic as I wasn't trapped, but it was a close call.

I reached for a nearby piece of timber that had been thrown from a house and pulled myself out.

As I clambered back towards relatively solid ground – nearby, an earthmover was picking up and flinging aside mud to try and dig a path down a suburban street  – I realised that I would have to make my peace.

I had to leave the kitten to die; to starve to death, to be precise.

I told myself that the death of one cat didn't matter – thousands of people had lost their lives- and walked away to start interviewing locals who had miraculously survived the awful devastation.

But 40 minutes later I was on the edge of the disaster zone. Anne Barker, one of the ABC's correspondents on the ground, had arrived and we listened to the kitten's cries.

Then we spotted him, darting back and forth on what looked like a shattered green door frame that lay horizontal under the eaves of the destroyed house .

Emboldened by Anne's promise to keep an eye on me, I grabbed some sheets of aluminium that had been blown off the roofs of nearby houses and walked out to the kitten.

As I stretched out my arms he leapt into my arms, dug his claws into my shirt and "miaow, miaow, miaow"-ed his thanks.

Gingerly, I made my way back to Anne.

As I walked back onto solid ground, our local translator and fixer's eyes lit up, and he grabbed me.

There was a woman around the corner, Novi, who owned eight cats. She would take the kitten. We walked the 50 metres or so to Novi's house, and she didn't hesitate – the kitten had a new home.

Novi and I bathed him together and gave him water in her backyard, which had been turned into a muddy swamp, while her bemused husband Budi looked on. Twenty more metres and their house would have been swallowed by mud and the couple would have been dead.

Instead, we pulled the thick mud from the kitten's hair, cleaned the gunk from his eyes and using a straw, we gave him some water.

After saying goodbye I walked out onto the street and another kitten ran towards me, crying.

You couldn't make it up. I picked her up, a sister of the kitten I had just rescued, and returned to Novi's house.

"I found another one…"

Of course she didn't mind.

I've never seen anything like what happened in Palu, and I hope I never do again; the Talise beach moonscape, wiped off the map; the broken roads; the houses that looked like they had been placed in a blender; the body bag I used as a ground sheet each night; the kindness of strangers as we sought out a meal when all the shops and restaurants were closed; the smell of the dead.

I'm still in contact with Novi, sending money and requesting updates on the kittens, who are doing fine.

My nearly three-year-old daughter Sabina has named them Bina and Treat.

What does it matter that I'd helped save the lives of two cats?

Thousands of people died, and tens of thousands had their lives changed forever.

Saving two kittens and finding them a home is small beans in comparison.

But the Palu disaster taught me that sometimes you have to break the (unwritten) rules you live by.

Sometimes, in life, you just have to focus on what is manageable.