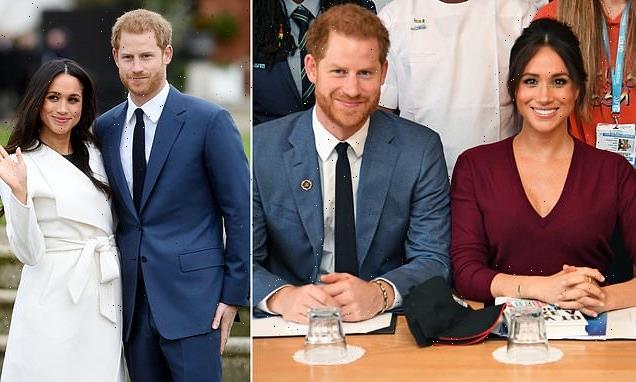 Prince Harry and Meghan Markle’s battle over security whilst in the UK continues this week as it is revealed they will have to use their own bodyguards during a trip to Manchester on Monday.

The couple reportedly landed on UK soil yesterday morning after flying commercial, and did not appear to have their children with them in their first return to the country since the Queen’s Platinum Jubilee in June.

But tensions remain over Prince Harry’s legal battle with the Home Office over its refusal to provide a heavy police protection to the Sussexes – despite them offering to pay for it.

Now the couple face relying on their own security staff and event organisers to keep them safe at a One Young World event they will attend in Manchester tomorrow, the Sun reports.

One Young World is an organisation which promotes young leaders and brings together communities from across the world, supporting young campaigners and representatives with impactful projects.

Meghan has been supporting the organisation, which has previously seen speakers such as Emma Watson attend, for several years.

She is expected to deliver the keynote speech at the opening of the four-day conference on Monday.

A spokesperson for Greater Manchester Police confirmed to MailOnline that the couple’s security is being ‘privately secured’. 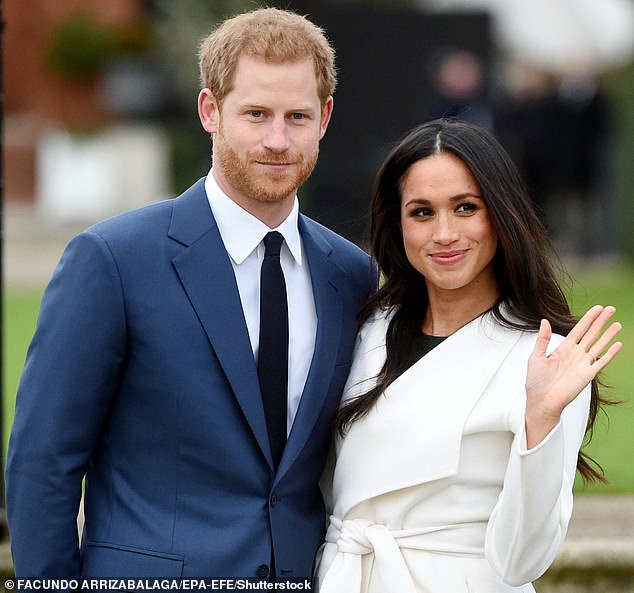 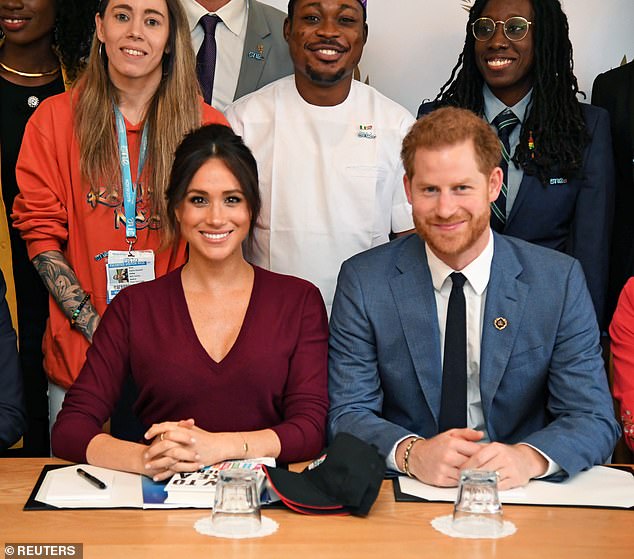 Meghan, the Duchess of Sussex, and Prince Harry, Duke of Sussex, pose for a picture while attending a roundtable discussion with The Queen’s Commonwealth Trust (QCT) and One Young World at Windsor Castle in 2019 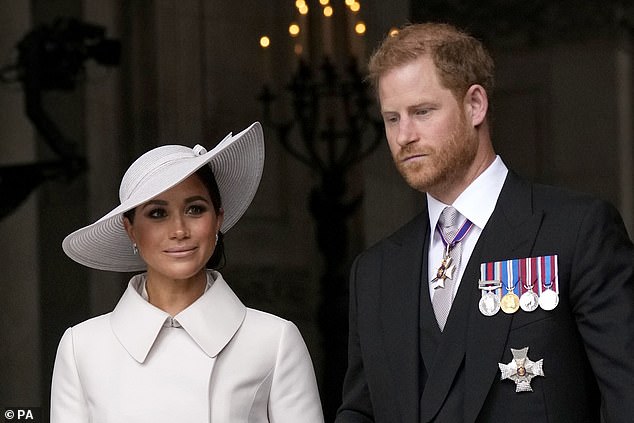 This week’s visit is the first time the couple have returned to the UK since the Platinum Jubilee in June (Pictured: The Duke and Duchess of Sussex leaving the National Service of Thanksgiving at St Paul’s Cathedral, London, on day two of the Platinum Jubilee) 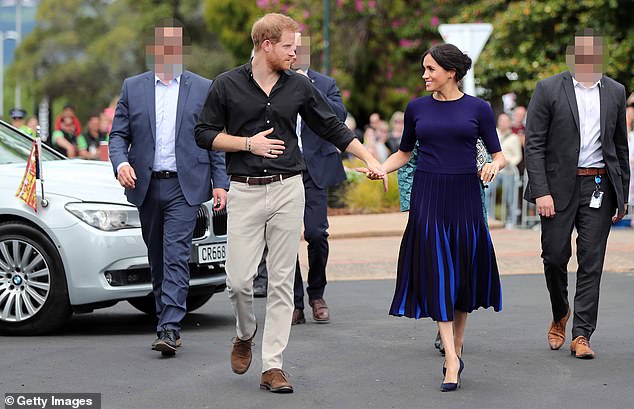 Harry and Meghan, pictured arriving at the public walkabout at the Rotorua Government Gardens in October 2018, flanked by security guards. Harry has taken the UK Home Office to court over the level of security proposed in Britain after they quit as frontline royals

Prince Harry has been embroiled in a lengthy legal battle with the UK Home Office after it previously refused to provide police protection for the couple to return to the country after they stepped back from royal duties and moved to California.

The Duke of Sussex, 37, has been taking legal action against the department after being told he would no longer be given the ‘same degree’ of personal protective security when visiting from the US.

His representatives have previously told of how he wants to bring wife Meghan Markle and their children Archie and Lilibet to visit from the US, but that they are ‘unable to return to his home’ because it is too dangerous.

Although the whole family did make the trip for the Queen’s Platinum Jubilee, the couple stayed out of the limelight. Their children, Archie and Lillibet, are believed to have remained at home in California this week.

After stepping back from royal duties, it was decided that the prince should be taken off the list for the Protection of Royalty and Public Figures (Ravec), whose members receive automatic security funded by the taxpayer.

In July, Harry won the right to bring a High Court challenge against the Home Office over his security arrangements in the UK.

A High Court judge said Harry had an ‘arguable’ case on four of the five grounds on which he brought his claim, and that his lawyers will be able to make his arguments at a judicial review of the Home Office decision.

After his official role ended and he became ‘a privately funded member of the Royal Family with permission to earn his own income and pursue his own charitable interests’, Ravec withdrew guaranteed police support.

Ravec chairman Sir Richard said in a letter to the Queen’s private secretary that while the committee would ‘continue to monitor the security of the Sussex family’, the ‘existing provision by the Metropolitan Police will be withdrawn… there is no basis for publicly funded security support’.

Harry said he only discovered the extent of the change when he made one of his rare visits to England in June 2021, and was unhappy with arrangements made.

The Home Office maintains Ravec was entitled to reach the decision that his security arrangements will be considered on a ‘case by case’ basis.

The Duke and Duchess of Sussex have a packed schedule ahead of them as they return to the UK this week, including the One Young World conference on Monday, a trip to Dusseldorf, Germany on Tuesday, and another charity event in the UK on Thursday.

The visit to Germany will mark one year to go until the beginning of the 2023 Invictus Games in the city, which was set up by the Prince and enables former servicemen and women to compete in a variety of sport events.

But despite having a free day on Wednesday, it is understood there are currently ‘no plans’ for Prince Harry to meet with his brother, Prince William. 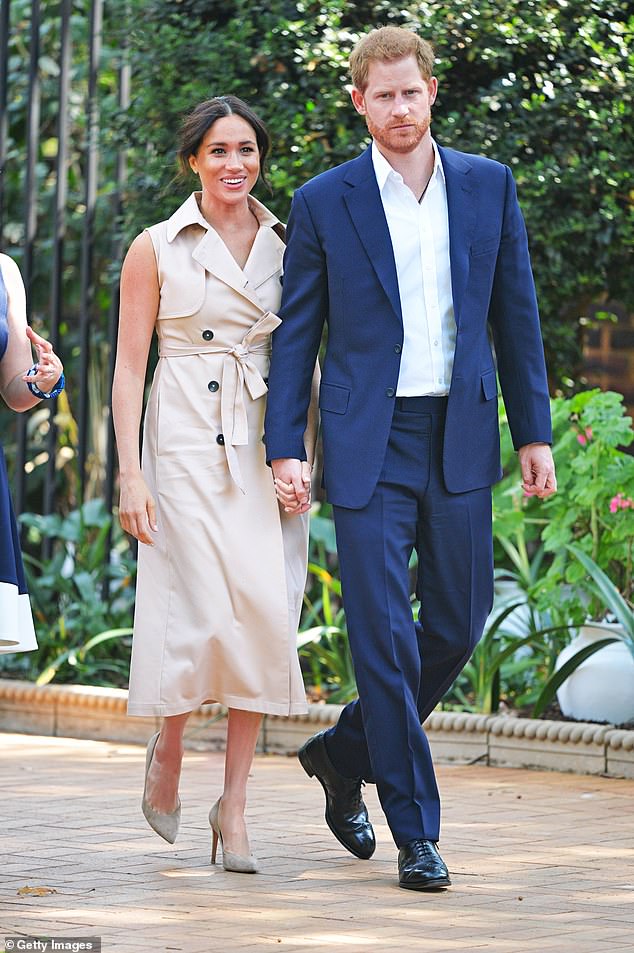 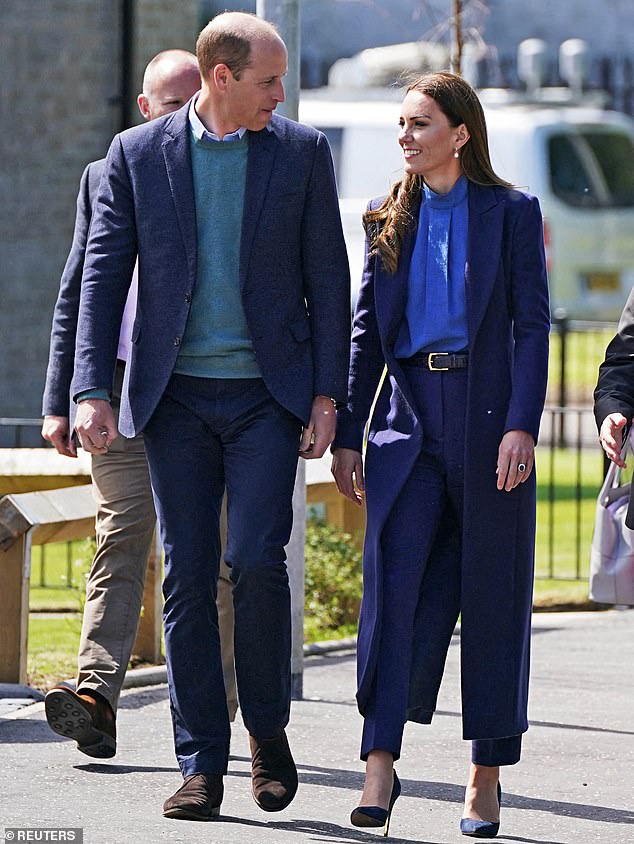 William’s relationship with Harry is said to be extremely strained, as William feels ‘betrayed’, according to royal sources 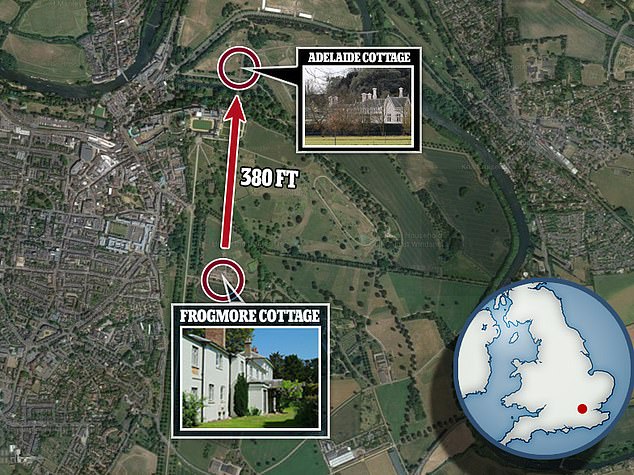 As Harry and Meghan are believed to be planning on using their Windsor home, Frogmore Cottage, as a base, they will be staying just five minutes away from Prince William and Kate Middleton, who moved into their new Windsor home, Adelaide Cottage, with their children this week.

William and Kate will live there with children George, Charlotte and Louis during school term-time, having enrolled them locally.

What is Harry’s concern with UK security and why is he taking legal action?

Are Harry and his family covered by security arrangements currently?

He and his wife, the Duchess of Sussex, personally fund a private protection team in the US for their family.

The Sussexes have signed multimillion-pound deals with Netflix and Spotify, with Harry telling Oprah Winfrey he secured these to pay for his security.

But he and Meghan lost their taxpayer-funded police protection in the UK in the aftermath of quitting as senior working royals.

Why did they lose their taxpayer-funded security?

Their security provision was one of the key issues when the couple announced they wanted to step down in 2020.

Speaking to Winfrey during the couple’s sit-down interview in 2021, Harry said he was told that ‘due to our change of status – we would no longer be ‘official’ members of the royal family’.

He said he had been shocked by this and ‘pushed back’ on the issue, arguing that there had been no change of threat or risk to the couple.

Meghan, during the same interview, told how she had written to her husband’s family urging them not to ‘pull his security’, but had been told ‘it’s just not possible’.

At the time of announcing their stepping back from royal life in 2020, their website suggested the Home Office, through the Metropolitan Police, should continue to provide protection for the couple and Archie, their only child at the time.

Have they offered to pay for police protection in the UK themselves?

Yes. Harry wants to fund the security himself, rather than ask taxpayers to foot the bill, his legal representative said.

He first offered to personally pay for police protection in the UK for himself and his family during the so-called Sandringham summit in January 2020, but the legal representative said that offer ‘was dismissed’.

The representative added that Harry ‘remains willing to cover the cost of security, as not to impose on the British taxpayer’.

Can they use the same security team they have while in the US?

Harry’s legal representative said that while the couple personally fund a private security team for their family, ‘that security cannot replicate the necessary police protection needed whilst in the UK’.

His argument is that the US team does not have adequate jurisdiction abroad or access to UK intelligence information which is needed to keep the Sussex family safe.

So what is Harry doing about the issue of his UK security now?

In September 2021, he filed a claim for a judicial review after the Home Office decided not to allow him to personally pay for police protection for himself and his family while in the UK.

His legal team said this course of action was taken ‘after another attempt at negotiations was also rejected’.

They said the judicial review bid is an attempt to ‘challenge the decision-making behind the security procedures, in the hopes that this could be re-evaluated for the obvious and necessary protection required’.

What threats do the couple see themselves as facing in the UK?

In a statement, the legal representative said: ‘He remains sixth in line to the throne, served two tours of combat duty in Afghanistan, and in recent years his family has been subjected to well-documented neo-Nazi and extremist threats. While his role within the Institution has changed, his profile as a member of the Royal Family has not. Nor has the threat to him and his family.’

Has the Home Office said anything about the bid for judicial review?

A Government spokesperson said: ‘The UK Government’s protective security system is rigorous and proportionate. It is our long-standing policy not to provide detailed information on those arrangements. To do so could compromise their integrity and affect individuals’ security.

‘It would also not be appropriate to comment on the detail of any legal proceedings.’

Will the couple return to the UK if the issue is not resolved in the way they would like?

A spokesperson for the duke has said that, in the absence of what they consider to be the necessary protection, ‘Prince Harry and his family are unable to return to his home’.

They insisted the UK ‘will always be Prince Harry’s home’, adding that it is ‘a country he wants his wife and children to be safe in’.

But they added: ‘With the lack of police protection, comes too great a personal risk.’