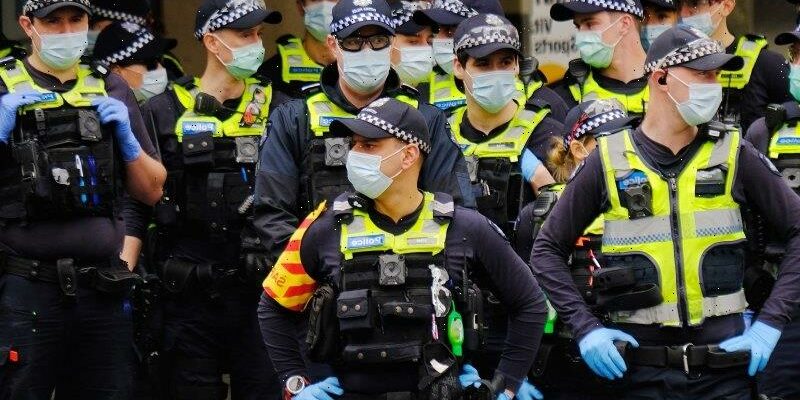 Police officers have so far thwarted planned large-scale anti-vaccination protests on Friday, picking off and detaining individual protesters on their way into Melbourne’s CBD and surrounding suburbs.

The continuous action has been lashed by Chief Health Officer Brett Sutton, who described the protesters on Friday morning as “absolutely wacky”. Health Minister Martin Foley said the protests threatened to morph into super-spreader events. 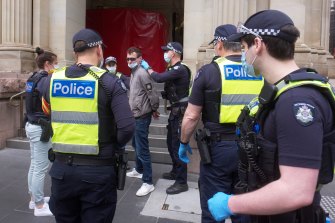 A man is detained by police in Melbourne on Friday.Credit:Luis Ascui

“This ill-advised behaviour is threatening to achieve the direct opposite of what they proclaim to be their goals. More cases prolong the public health measures; vaccines and vaccinations shorten them,” Mr Foley said.

About 100 protesters converged on the inner-north suburb of Northcote around 2pm, shouting “every day” and occasionally hurling abuse at passersby. One woman filming a live stream asked her followers: “What are we doing?“.

Protesters moved towards a playground, with police mobilising into lines on either side of the group.

The fifth day of planned action comes after it was revealed a person who attended the anti-lockdown and anti-vaccination protest in Melbourne on Wednesday is now in hospital being treated for COVID-19. 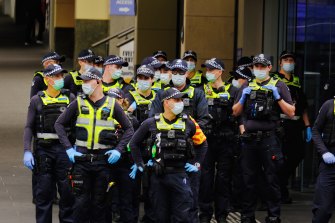 A spokesperson for the Department of Health said public health investigations were underway into the positive case. The person has been included in today’s case number of 733 new infections and one person’s death.

It follows chaotic scenes on Wednesday, when thousands of protesters converged on the Shrine of Remembrance, scattering only when the riot squad moved in firing rubber bullets and pepper spray into the crowd.

Protesters set off flares and pelted police with projectiles including bottles and golf balls.

After those ugly scenes, police vowed to continually adapt their tactics and Thursday’s planned protests fizzled out amid dozens of arrests. 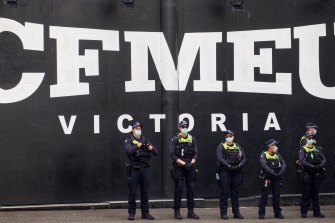 Protesters have been organising meet-up points on the encrypted app Telegram, but police are also monitoring the channels, with teams of police intercepting individual protesters as they move into their chosen locations to try to form groups.

On Friday afternoon, a protest organiser said there was still “chatter” about further action, but conceded the police tactics had largely thwarted protests.

“Our plan has been to start with multiple locations to stretch thin cop resources and provide protesters a chance to form crowds – our government has responded by wasting MORE of their resources to suppress your democratic right to peaceful protest,” they said.

“They have increased presence in our locations and broken up small groups to send them home.” 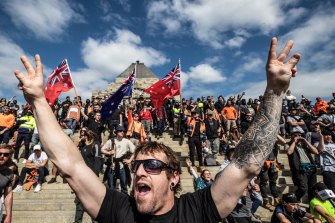 Thousands of people angry about vaccinations and lockdowns shut down parts of the city and descended on the Shrine of Remembrance before being forced out by riot police on Wednesday. Credit:Jason South

Mr Foley said more than 90,000 Victorians had been vaccinated on Thursday.

“These so-called freedom fighters are losing oxygen every day, because the Victorian community does not support their behaviour,” he said.

The protests kicked off on Monday outside the CFMEU’s Melbourne office in response to new rules requiring construction workers to have at least one vaccine dose to work on building sites. They have since morphed into a canvass on which protesters can project their rage about vaccines, lockdowns and Victorian politics.

Professor Sutton brushed off suggestions the announcement of the vaccine requirement for construction industries could have been handled better. 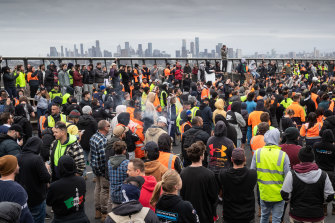 “This is not just about [protesters] being anti mandated vaccination; they are anti-everything,” he said.

“They think that everything will be solved by taking a horse de-worming tablet, Ivermectin, that gives you the runs and that puts some people in hospital. They are literally in a fantasy world. If they’ve taken mandated vaccination as a hook [to protest], so be it. But let’s not pretend that these are otherwise rational individuals; they are absolutely wacky.”

“There have been some disgraceful scenes, particularly at the Shrine – deeply disturbing and deeply upsetting and deeply offensive,” he said. “We respect freedom of speech but equally there are things we must deeply respect and the desecration of the Shrine of Remembrance is truly sickening.”

Victorian authorities are urging people to stay home over the AFL Grand Final long weekend, with Professor Sutton cautioning the 9pm curfew was still in place.

“Enjoy your fancy cheeseboards or whatever way you want to enjoy it at home, put the barbecue on, put your iPad up, have your phones on FaceTime; cry and scream and laugh and joke over the internet … the overwhelming transmission that’s occurring is between households for people who are not aware that they’re positive.”

While the state was projected to reach its target of 80 per cent of eligible Victorians having received their first dose by Sunday, Mr Foley said on current rates the state would now reach that goal by mid to late next week.