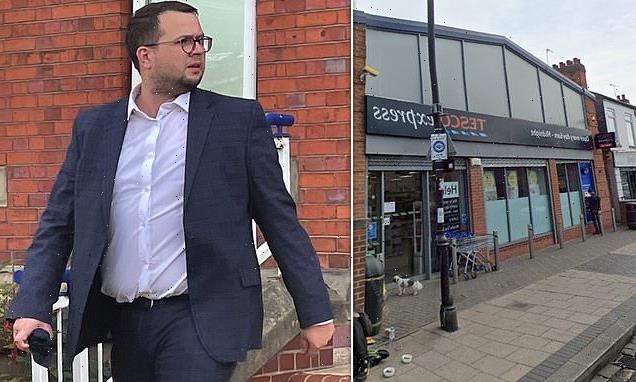 A police officer punched a man and leg-sweeped a woman who were suspected of a burglary after they were put in handcuffs.

PC Henry Green used ‘excessive and unjustifiable force’ arresting the two people at a Tesco Express store and has been found guilty of gross misconduct.

He was called to reports of a burglary involving three people at the store in Newland Avenue in west Hull just before 11.30am on June 6, 2019 where he put a male then a female in handcuffs.

The 28-year-old claims the two suspects then became ‘aggressive and he had concerns for his own safety’ so had to take action.

But the woman claimed during the misconduct hearing that she was ‘screaming in agony’ due to the pain of hitting the floor.

He then punched the male suspect in the face while holding metal handcuffs.

The three-person Misconduct Panel, at the Old Magistrates’ Building in Goole, has now adjourned to decide whether Green stays employed. 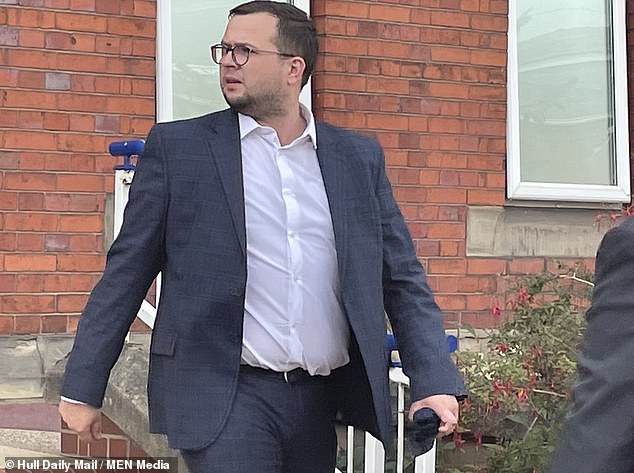 PC Henry Green, 28, used ‘excessive force’ arresting the two people in Tesco and has been found guilty of gross misconduct and is now facing the sack

After the incident, he was investigated by Humberside Police’s Professional Standards Department (PSD), who paused it during a criminal investigation.

Green was charged with two counts of common assault and appeared at York’s Magistrates’ Court in December 2021 where he was found not guilty of the offences.

Head of PSD, Detective Superintendent Matt Baldwin, speaking after the hearing, said: ‘We expect all of our officers and staff to always act with the utmost integrity and professionalism, only using force if absolutely necessary in their line of duty.

‘Henry Green displayed an excessive use of force during this incident. The force used was unnecessary, disproportionate and unjustifiable. His actions and conduct that day were completely unacceptable and utterly discreditable, falling way below the standards we expect of our officers.

‘He was removed from his role and duties where there would be contact with the public immediately after the incident and placed in a non-operational role, pending the criminal and internal investigation. His position in the force will now be reconsidered until the panel make a decision on the 25th July.

‘We will not accept any officer or member of staff behaving in a way that fails to uphold or maintain their responsibility to serve and protect the public in the Humberside area. It is of paramount importance that we maintain the public’s trust and confidence by dealing with officers who behave in a way that undermines this.’ 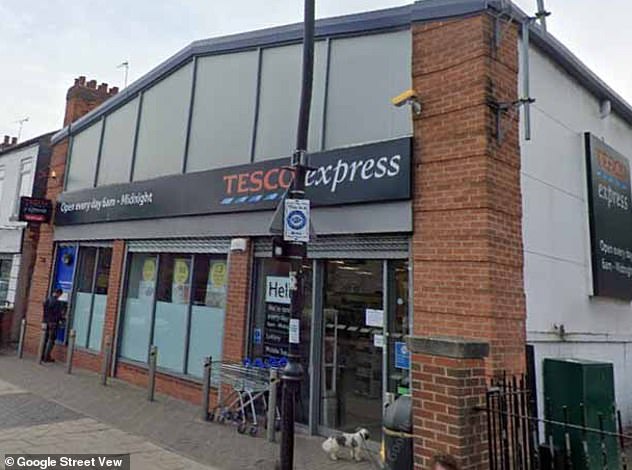 PC Henry Green and a colleague were called to reports of two men and a woman, suspected of burglary, at the Tesco Express store in Newland Avenue, Hull, (pictured) just before 11.30am on June 6, 2019

The female suspect, who gave evidence during the police misconduct hearing, on Monday, said: ‘I protested and the officer then put me to the floor which was hard and I damaged my back.

‘He made no effort to lower me or break my fall. He then came down on my stomach. I was screaming in agony due to my back.

‘I was shouting I had done nothing wrong but I was just getting my point across and didn’t resist arrest.’

However, in a statement, PC Green insisted his actions were justified. He claims the suspects became aggressive and he had concerns for his own safety.

In his statement PC Green said: ‘Her behaviour had escalated quickly, I was alone with two suspects. I had previously been assaulted that morning by another person I had arrested, who was also handcuffed when he managed to assault me.

‘I had literally seconds to decide how to deal with the situation and take action, in what was a fluid situation. I therefore decided to take her to the floor, using a leg sweep.

‘I went to take hold of him and as I did, he tensed his arm up and moved his arm upwards. I honestly believed that he was going to assault me in a bid to escape, despite being handcuffed, due to his arm movements.

‘I therefore delivered a single punch to the face with my right hand. Again, this decision was made in a split second and in a bid to detain him on the floor as quickly as possible.’ 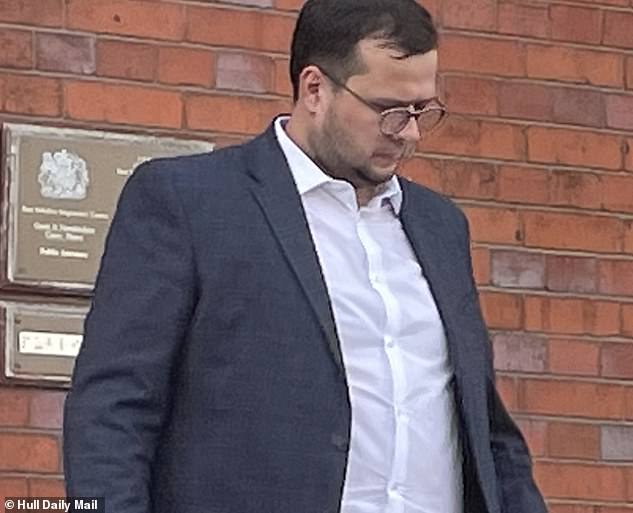 The Misconduct Panel, at the Old Magistrates’ Building in Goole, has now adjourned until Monday, 25 July when it will be decide whether Green stays employed

Ian Mullarkey, representing Humberside Police at a previous hearing, said: ‘He fails to adequately support or control [the female suspect’s] fall to minimise the risk of serious injury.

‘It is apparent that as [the female suspect] strikes the hard floor of the supermarket she is not supported by the officer in any way,’ Mr Mullarkey added. ‘The officer then says ‘you can stay there, sweetheart’, which gives an insight into the officer’s motivation. The officer was not afraid for his safety, but was agitated, excited and confrontational.

Neither suspect had offered any resistance, Mr Mullarkey told the hearing. He said this was backed up by staff in the Tesco store.

Mr Mullarkey added: ‘A customer assistant at Tesco observed the officer punch out at [the male suspect] (though she did not see whether the blow landed) and stated: ‘I had not seen male one attempting to attack the officer or being aggressive prior to the punch being thrown.’

‘[The male suspect] was then also forced to the floor and the officer says, ‘Show me any more resistance and I’ll punch you in the face again you little p****.’

Derek Christmas, a police personal safety trainer, provided a witness statement in which he said PC Green showed ‘little or no concern for the safety and welfare of the [female] suspect when he pushes or leg sweeps her to the floor’.

The hearing has been adjourned until Monday, 25 July when it will be determined whether PC Green is fired.