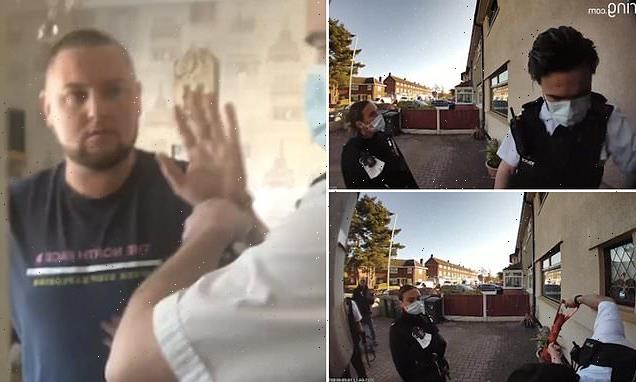 Police raid on hotel quarantine buster: The moment officers batter down door and arrest man who refused to stay in mandatory isolation and fled after just hours following his return to UK from Dubai

Dramatic footage shows the moment police bust down the door of a British man who came back from Bahrain and ‘refused to quarantine in a hotel’.

Football coach Mathew Owens, 30, left Bahrain on April 9, having worked for one of the country’s premier league clubs. He made two transfers on his return journey – the first to Abu Dhabi, then on to Frankfurt before finally flying back to Manchester.

Mr Owens claims he had phoned the consulate in Bahrain asking if he could travel through Abu Dhabi – which is on the travel ‘red list’ – and they told him that he would be ‘fine’ as long as he didn’t leave the airport at any point.

But when he stopped off at Frankfurt International Airport, Mr Owens says he was told he faces a £1,750 bill to quarantine in a hotel in Birmingham – 100 miles from his home in Liverpool.

After arriving in Manchester, police then insisted they would escort him to a coach that would take him all the way to Birmingham, he said.

Once there, he says he refused to supply his details to G4S, and said he would leave as soon as he could, despite warnings of a £10,000 fine. He then phoned his parents, who made the two-hour trip from Liverpool, and they drove home, Mr Owens said.

He claims details from his passport, phone and email address were used to check him into the hotel without his knowledge.

Doorbell footage, posted online on April 12, shows the moment officers knock on his front door, before one uses a battering ram to smash his way in to arrest Mr Owens for allegedly breaching Covid restrictions.

In another one-minute clip, filmed by his mother Andrea, officers are seen breaking glass and entering a house before walking upstairs and demanding to know where ‘Martin’ is, before arresting Mr Owens. 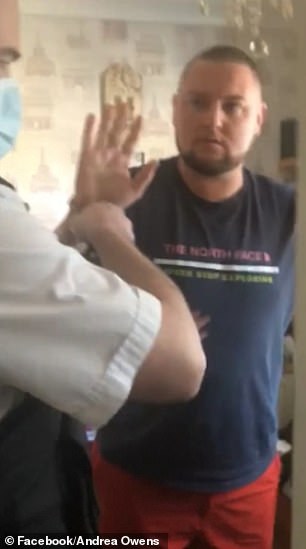 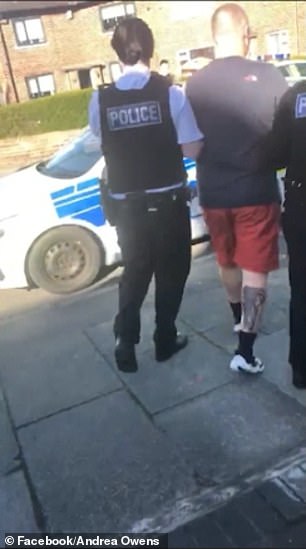 Doorbell footage shows the moment officers knock on his door, before one uses a battering ram to smash his way in

The woman filming from the top of the staircase continually tells them ‘You’re here to protect us’, asking the officers ‘Are you standing under your oath?’

A male officer wearing a pale blue face mask asks where ‘Martin’ is, and the woman filming says ‘he’s isolating’.

Police then handcuff Mr Owens as a female officer tells him: ‘Martin, you’re under arrest for a breach of Covid regulations, you’ve failed to quarantine in a designated hotel when instructed to do so.

‘You do not have to say anything but it may harm your defence if you fail to mention something which you later rely on in court. Anything you do say may be given in evidence. Do you understand?’

As the camera pans away, a male voice can be heard ‘No I don’t understand’ before the clip finishes. 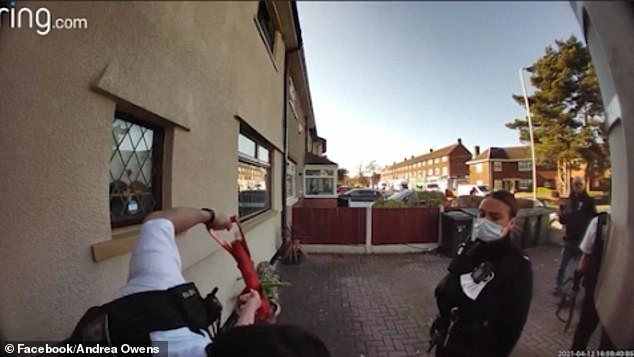 Doorbell footage shows the moment officers knock on his door, before one uses a battering ram to smash his way in to arrest him for allegedly breaching Covid restrictions 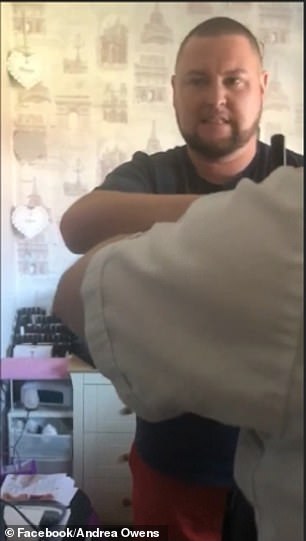 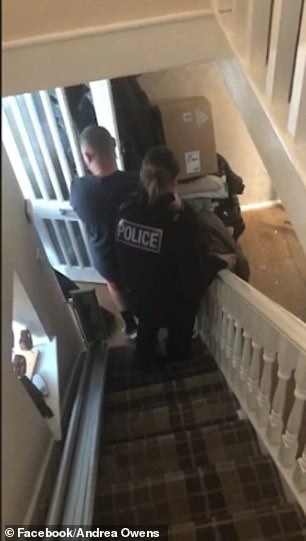 The woman filming from the top of the staircase continually tells them ‘You’re here to protect us’, asking the officers ‘Are you standing under your oath?’

Mrs Owens posted footage on social media, blasting police for ‘not even know(ing) my son’s name’.

Mr Owens is now in quarantine at the Crowne Plaza in Birmingham city centre. Speaking from his hotel room, he said: ‘I’m amazed at what has happened.

‘It makes no sense at all. If they were going to fine me, then so be it but what sense does it make to take me out of the controlled quarantined environment of my home, to mix with other people at the police station, and then to send me to Birmingham to mix with even more people.

‘They also left my mum, who is disabled and vulnerable, without a front door.’

Merseyside Police officers arrived at his home in Bootle, Liverpool, on Monday at 3.30pm.

Mr Owens said: ‘The police said they were there on behalf of Border Force. I told them I was isolating and had just sent off my first Covid test, which has returned negative.

‘I was two days in and asked them what sense did it make to take me out of this environment at this stage.

‘They just said they were there on behalf of Border Force and I needed to go to a hotel.

‘We have a video doorbell and we could hear officers radioing back describing the door, so it was clear they were planning to break it down.

‘I opened the window and asked if they had a warrant and was told they didn’t need one.

‘Then more officers arrived with equipment to break-in.

‘As they’ve forced entry, one of the officers cut himself, leaving blood on the wall and the floor.

‘As they were coming up the stairs, they are shouting ”Martin, Martin” but my name is Mathew.

‘When they went upstairs, one officer just pushed my mum out to the side.

‘I wasn’t particularly scared when I was arrested. I was just astonished that they didn’t need a warrant and could smash the door down. 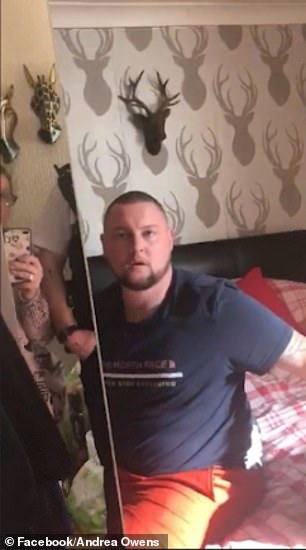 Mr Owens had left Bahrain on April 9, where he had been working as a football coach for one of the country’s premier league clubs

‘What astonished me even more was that I wasn’t charged with anything. They literally broke into my house to hold me and pass me back to G4S.

‘It just makes zero sense to take me out of an isolated environment to a police station, then to the hotel.

‘The whole thing is just ludicrous.’

Mr Owens had left Bahrain on April 9, where he had been working as a football coach for one of the country’s premier league clubs, after new restrictions meant he could only leave his house for essential shopping.

He said: ‘Bahrain’s shops, bars and restaurants were set to re-open after Ramadan, but you could only go out if you’d had the vaccine or had recovered from Covid. I’d had neither and there wouldn’t be any enjoyment for me staying so I decided to come home.’

He said: ‘I knew Abu Dhabi was on the red list, so I contacted the consulate to ensure that I was fine to travel there without having to quarantine.

‘I was told that because I’d not stepped foot in Abu Dhabi and was just transferring through, I was fine.

‘I literally walked off the plane, had my bags checked and went to the next gate. I was there for an hour-and-a-half.’

His ordeal began when he landed in Manchester and headed to passport control.

He said: ‘I showed the border control officer my forms and told him where I’d travelled from and where I was going.

‘The officer told me because Abu Dhabi was on the red list, I’d have to be booked into a quarantine hotel for 10 days and the closest one was Birmingham.

‘I told him that wasn’t the advice I’d received. I was then taken to a desk where I signed paperwork stating where I’d travelled from and that I could be subject to a £10,000 fine.

‘I signed everything until I was given a form where I had to agree to one of the control quarantined hotels and pay £1,750 and allow G4S to escort me away.

‘This is when I refused to give me consent.’ 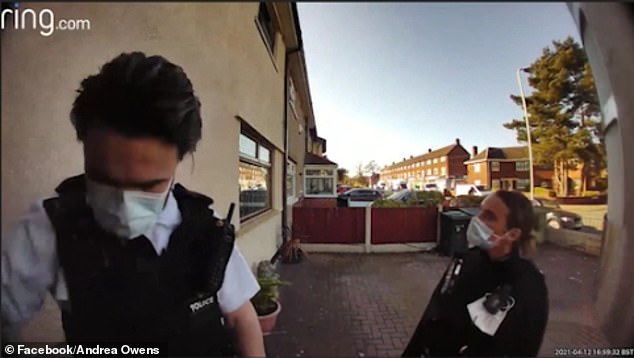 Mr Owens then claims he was threatened with being held in a police cell for 10 days if he did not sign the form.

He added: ‘They were trying to scare me but I refused again.’

After being detained for five hours in the airport, he was forced on to a coach and driven to the Crowne Plaza hotel, in Birmingham.

Mr Owens said: ‘There was just me and three G4S staff on the coach. Officers watched the coach leave and I was given a police escort out of Manchester.

Two hours later, he arrived at the hotel where he quickly logged on to the wifi so he could make a WhatsApp phone call to his parents.

Mr Owens handed the forms he had refused to sign to hotel staff, and waited in the reception until a family member arrived to take him home on Saturday at 1.4am.

Police officers called at his home address at 9am the same day but left when no one answered the door.

Mr Owens said: ‘We hadn’t got home until 5am so we were all in bed.

‘We didn’t hear anything until Monday when officers arrived to take me back to Birmingham.’

He was taken to Copy Lane Police Station where G4S staff picked him up in a taxi and returned him back to the hotel.

Mr Owens said: ‘This time hotel staff phoned the police. I was told that if I didn’t sign the consent form, I’d be arrested and hauled to court.

‘I didn’t want that or a criminal record, so I signed in under duress.

‘Now I am stuck here and the hotel is awful.

‘The room is a complete mess. It is filthy. It is dusty and they haven’t cleaned it since the last person was in it.

‘The G4S staff aren’t wearing gloves, nothing is being wiped down and I’d be safer at home.’

Mr Owens hopes he will be allowed home on Monday.