Federal Police have asked Victoria's anti corruption watchdog to look at allegations more than $1 million was transferred from the Vatican to Australia to attempt to secure the conviction of Cardinal George Pell.

The developments risk inflaming tensions inside the Holy See, to where Pell has returned after his conviction for child-sex abuse was overturned and he was acquitted by the High Court in April. 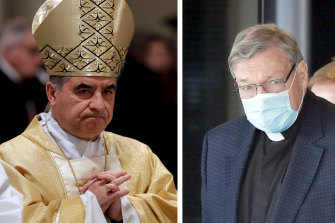 An apparent turf war between forces loyal to Pell and his rival, former cardinal Giovanni Angelo Becciu, has caused a major split between the most senior figures surrounding Pope Francis.

Italian newspapers La Repubblica and Corriere della Sera earlier this month claimed Becciu was suspected of arranging for €700,000 ($1.1 million) to be wired to people in Australia to support the prosecution of charges against Pell.

The papers did not provide any evidence to support the claims, which have been circulating privately among Pell's supporters for several years.

On Wednesday afternoon the Australian Federal Police confirmed it was reviewing information it had received from the financial crimes watchdog as part of a "routine exchange of financial intelligence" between the agencies.

"The AFP is undertaking a review of the relevant information," a spokeswoman said.

"The AFP has concurrently referred aspects of this matter to the Victorian Independent Broad-based Anti-corruption Commission."

Becciu's lawyer has said his client strongly denies any interference with Pell's trial. The allegations have also been denied by people who gave evidence against Pell during legal proceedings in Melbourne.

On Tuesday evening, AUSTRAC chief executive Nicole Rose revealed the anti-money laundering regulator had examined the media reports and had provided information to the Australian Federal Police and Victoria Police.

"Yes I can confirm AUSTRAC has looked into the matter and we've provided information to the AFP and to Victoria Police," she told a Senate estimates committee at Parliament House in Canberra.

She did not say what the nature of the information was, or why it was passed on to police at the state and federal level.

Liberal Senator Concetta Fierravanti-Wells had asked Rose about the allegations.

She also asked Department of Home Affairs Secretary Mike Pezzullo whether Pell's legal team had asked the agency to examine the issue. Pezzullo said he was not aware of any request but would check the records just in case.

"These are serious allegations with potentially significant consequences. Accordingly, they warrant full investigation," the senator said on Wednesday.

Pope Francis recently forced Becciu to relinquish his role as a cardinal and the head of the office responsible for appointing saints following allegations the 72-year-old misused church funds to invest in a luxury London property development.

Becciu denied any wrongdoing immediately after the September 24 firing.

"Up until yesterday … I felt I was a friend of the Pope, the faithful executor of the Pope," he said at the time.

"Then the Pope told me that he no longer had faith in me because he got a report from magistrates that I committed an act of misappropriation."

Becciu was considered an opponent of Pell's plans to reform the Vatican's finances when he served as the Holy See's treasurer before returning to Australia to face child sex charges.

Asked about Becciu's sacking, Pell responded: "I hope the cleaning of the stables continues in both the Vatican and Victoria."

Viv Waller, a lawyer who represented the man who in 2018 accused Pell of sexually assaulting him in the 1990s, rejected any suggestion her client was connected to the allegations.

"My client denies any knowledge or receipt of any payments," she said.

"He won't be commenting further in response to these allegations."

Italian media reports also suggested – without evidence – that the second former choirboy Pell was charged with sexually assaulting received money to accuse the Cardinal. However this boy never accused Pell of sexual assault, did not provide a statement to police and died three years before Pell was charged.

That boy's father, who testified against Pell at the committal proceeding, said the family had "certainly not received any money to give evidence against George Pell and any suggestion that the surviving complainant has is just ludicrous".

Pell, 79, was jailed in early 2019 but was released from prison and had his convictions quashed in April this year after a successful appeal to the High Court.

Pell's barrister, Robert Richter QC, has previously called for an investigation into reports about transfers from the Vatican.

"I am treating these reports as requiring a proper investigation by all fiscal authorities to track the money coming to Australia," he said earlier this month.