Islamabad: When President Donald Trump started the new year by suspending billions of dollars of security aid to Pakistan, one theory was that it would scare the Pakistani military into co-operating better with its US allies.

The reality was that Pakistan already had a replacement sponsor lined up. 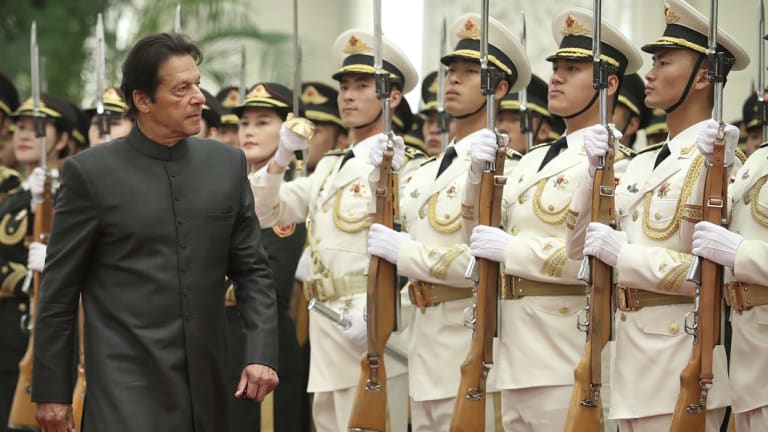 Just two weeks later, the Pakistani air force and Chinese officials were putting the final touches on a secret proposal to expand Pakistan's building of Chinese military jets, weaponry and other hardware. The confidential plan would also deepen the two countries' co-operation in space, a frontier the Pentagon recently said Beijing was trying to militarise after decades of playing catch-up.

All those military projects were designated as part of China's Belt and Road Initiative, a $US1 trillion  ($A1.4 trillion) chain of infrastructure development programs stretching across some 70 countries, built and financed by Beijing.

Chinese officials have repeatedly said the Belt and Road is purely an economic project with peaceful intent. But with its plan for Pakistan, China is for the first time explicitly tying a Belt and Road proposal to its military ambitions – and confirming the concerns of a host of nations who suspect the infrastructure initiative is really about helping China project armed might.

As a strategically located and nuclear-armed neighbour, Pakistan has been the leading example of how the projects are being used to give Beijing both favour and leverage among its clients.

Since the beginning of the Belt and Road Initiative in 2013, Pakistan has been the program's flagship site, with some $US62 billion in projects planned in the so-called China-Pakistan Economic Corridor.

In the process, China has lent more and more money to Pakistan at a time of economic desperation there, binding the two countries ever closer.

For the most part, Pakistan has eagerly turned more toward China as the chill with the US has deepened. Some Pakistani officials are growing concerned about losing sovereignty to their deep-pocketed Asian ally, but the host of ways the two countries are now bound together may leave Pakistan with little choice but to go along.

Even before the revelation of the new Chinese-Pakistani military co-operation, some of China's biggest projects in Pakistan had clear strategic implications. 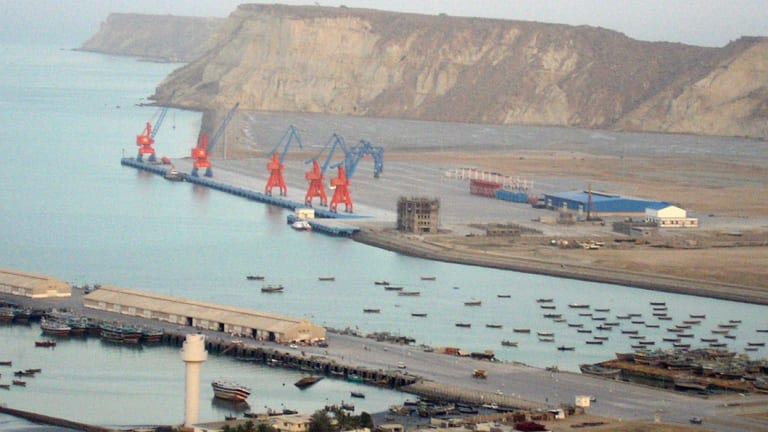 China is deeply invested in the Pakistani port of Gwadar

A Chinese-built seaport and special economic zone in the town of Gwadar is rooted in trade, giving China a quicker route to get goods to the Arabian Sea. But it also gives Beijing a strategic card to play against India and the US if tensions worsen to the point of naval blockades as the two powers increasingly confront each other at sea.

A less scrutinised component of Belt and Road is the central role Pakistan plays in China's Beidou satellite navigation system. Pakistan is the only other country that has been granted access to the system's military service, allowing more precise guidance for missiles, ships and aircraft.

The co-operation is meant to be a blueprint for Beidou's expansion to other Belt and Road nations, however, ostensibly ending its clients' reliance on the US military-run GPS network that Chinese officials fear is monitored and manipulated by the US.

In Pakistan, China has found an amenable ally with much to recommend it: shared borders and a long history of co-operation; a hedge in South Asia against India; a large market for arms sales and trade with potential for growth and a wealth of natural resources. 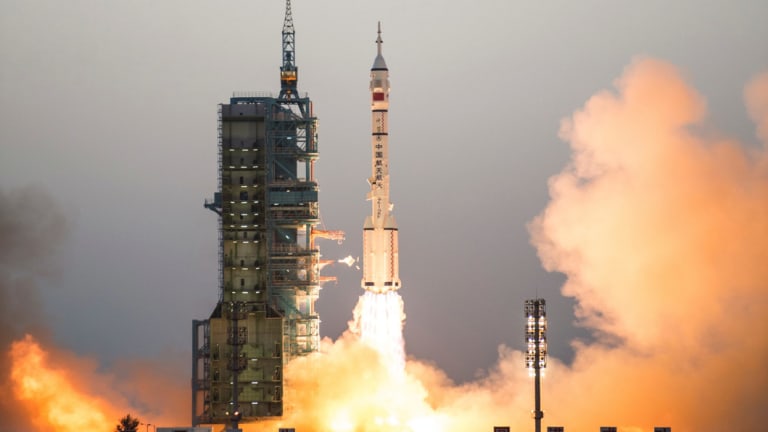 Pakistan is playing an increasing role in China’s space program.Credit:AP

Now, China is also finding a better showcase for its security and surveillance technology in a place once defined by its close military relationship with the United States.

"The focus of Belt and Road is on roads and bridges and ports, because those are the concrete construction projects that people can easily see," said Priscilla Moriuchi, director of strategic threat development at Recorded Future, a cyberthreat intelligence monitoring company based in Massachusetts.

An asset on the sea

The tightening China-Pakistan security alliance has gained momentum on a long road to the Arabian Sea.

In 2015, under Belt and Road, China took a nascent port in Gwadar and supercharged the project with an estimated $US800 million development plan that included a large special economic zone for Chinese companies.

Linking the port to western China would be a new 2000-mile network of highways and rails through the most forbidding stretch of Pakistan: Baluchistan province, a resource-rich region plagued by militancy.

The public vision for the project was that it would allow Chinese goods to bypass much longer and more expensive shipping routes through the Indian Ocean and avoid the territorial waters of several US allies in Asia.

From the beginning, though, key details of the project were kept from the public and politicians, officials say, including the terms of its loan structure and the length of the lease, more than 40 years, that a Chinese state-owned company secured to operate the port. 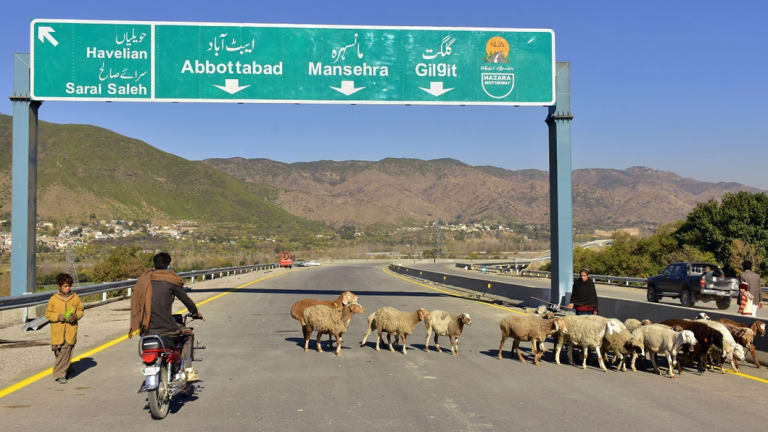 If there was concern within Pakistan about the hidden costs of the China-Pakistan Economic Corridor, also known as CPEC, there was growing suspicion abroad about a hidden military aspect, as well.

In recent years, Chinese state-owned companies have built or begun constructing seaports at strategic spots around the Indian Ocean, including places in Sri Lanka, Bangladesh and Malaysia.

Chinese officials insisted that the ports would not be militarised. But analysts began wondering whether China's endgame was to muscle its way onto coastal territories that could become prime military assets – much as it did when it started militarising contested islands in the South China Sea.

Then, Sri Lanka, unable to repay its ballooning debt with China, handed over the Chinese-built port at Hambantota in a 99-year lease agreement last year. Indian and US officials expressed a growing conviction that taking control of the port had been China's intent all along. 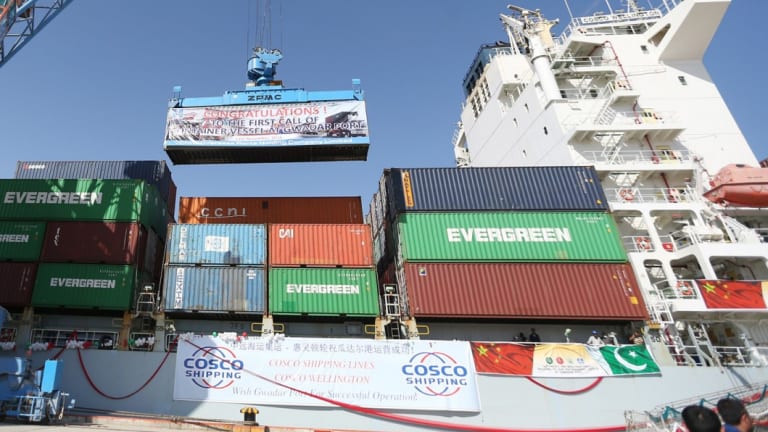 A Chinese container ship docks at the port of Gwadar.Credit:Anadolu Agency

Military analysts predict that China could use Gwadar to expand the naval footprint of its attack submarines, after agreeing in 2015 to sell eight submarines to Pakistan in a deal worth up to $US6 billion. China could use the equipment it sells to refuel its own submarines, extending its navy's global reach.

With CPEC under fresh scrutiny, officials in recent weeks have contended that Pakistan has a debt problem but not a Chinese debt problem.

In October, the country's central bank revealed an overall debt and liability burden of about $US215 billion, with $US95 billion externally held. With nearly half of CPEC's projects completed – in terms of worth – Pakistan currently owes China $US23 billion. But the country stands to owe $US62 billion to China – before interest balloons the figure to some $US90 billion – under the plan for Belt and Road's expansion there in coming years. 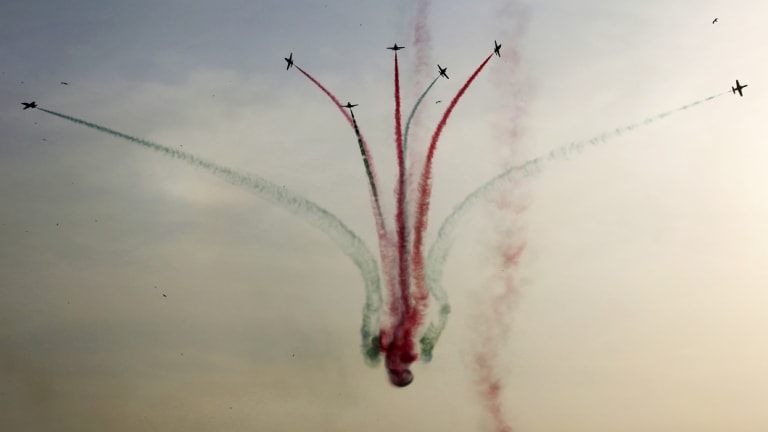 Pakistani fighter jets perform an aerobatic stunt during an air show this year.Credit:AP

According to the undisclosed proposal drawn up by the Pakistani air force and Chinese officials at the start of the year, a special economic zone under CPEC would be created in Pakistan to produce a new generation of fighter jets. For the first time, navigation systems, radar systems and onboard weapons would be built jointly by the countries at factories in Pakistan.

The proposal, confirmed by officials at the Ministry of Planning and Development, would expand China and Pakistan's current co-operation on the JF-17 fighter jet, which is assembled at Pakistan's military-run Kamra Aeronautical Complex in the Punjab. The Chinese-designed jets have given Pakistan an alternative to the US-built F-16 fighters.

For China, Pakistan could become a showcase for other countries seeking to shift their militaries away from US equipment and toward Chinese arms, Western diplomats said. And because China is not averse to selling such advanced weaponry as ballistic missiles – which the US will not sell to allies such as Saudi Arabia – the deal with Pakistan could be a stepping stone to a bigger market for Chinese weapons in the Muslim world.

For years, some of the most important military co-ordination between China and Pakistan has been going on in space. 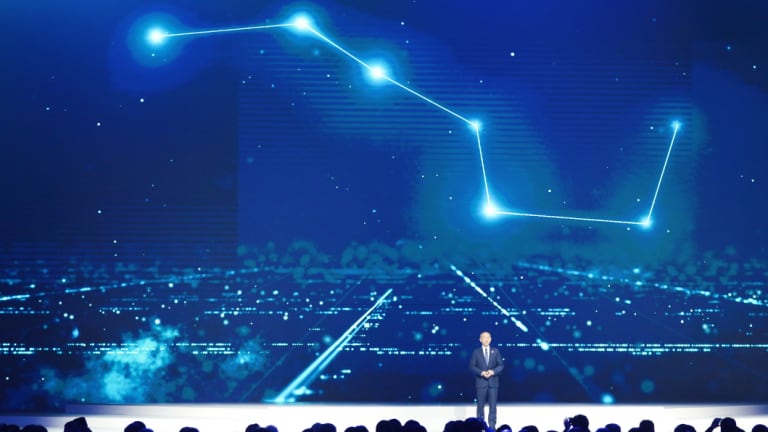 China’s BeiDou navigation satellite system is an alternative to GPS.

Just months before Beijing unveiled the Belt and Road project in 2013, it signed an agreement with Pakistan to build a network of satellite stations  to establish the Beidou Navigation System as an alternative to the American GPS network.

For the Pentagon, China's satellite launches are ominous.

"The [Chinese military] continues to strengthen its military space capabilities despite its public stance against the militarisation of space," including developing Beidou and new weaponry, according to a Pentagon report issued to Congress in May.