‘They lost… suck it up’: Piers Morgan rows with SNP leader Nicola Sturgeon over Brexit and a new independence referendum as she tells GMB that ‘Scotland is being completely ignored and disregarded’

Piers Morgan has challenged the SNP leader to ‘suck it up’ comparing her loss of the 2014 referendum on Scottish independence to her nation’s capitulation to Japan in the rugby world cup yesterday.

In a feisty interview this morning the presenter kicked off the hostilities, saying he presumed the Scottish SNP leader would like ‘an immediate replay’ of Scotland’s game against Japan in the rugby world cup, which the home nation lost 21 to 28 yesterday.

Over Ms Sturgeon’s laughed denials, Mr Morgan said ‘Scotland got hammered’ and added that he’s seen a second-tier team ‘give your lot a lesson in rugby’.

After trying to draw Ms Sturgeon into agreeing the result should stand – an apparent allusion to her support for a second referendum on Scottish independence, Ms Sturgeon said: ‘Rugby matches, as important as they are, particularly during a world cup, are not the same as the future of the country’

She said she still support a second independence referendum saying ‘circumstances have changed, so dramatically changed’ since the 2014 vote.

She said Britain’s departure from the EU would be carried out against Scotland’s will, adding: ‘The way Scotland is being completely ignored and disregarded, yes I believe we should have another opportunity to decide if we want to be an independent country.’

She went on: ‘I think when we do, as we see in the polls, the people of Scotland will decide that that’s exactly what we should be.’

After the pair clashed on a hard border in Ireland, Mr Morgan said Scottish independence would create ‘huge difference’ in the tax regimes between the nations, adding: ‘We would therefore need to have a hard border between Scotland and England’. 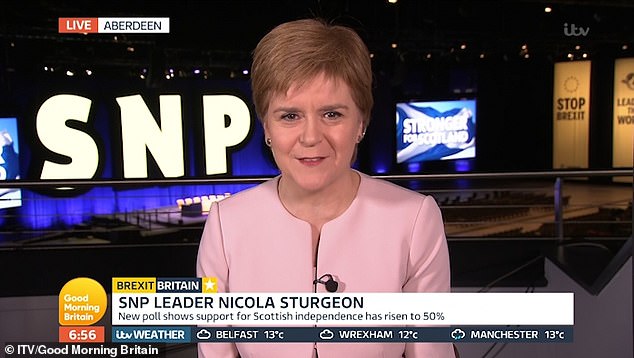 Ms Sturgeon said: ‘The way Scotland is being completely ignored and disregarded, yes I believe we should have another opportunity to decide if we want to be an independent country’

Ms Sturgeon said it was not inevitable that a hard border would follow Scottish independence and said she would ‘argue for outcomes’ which would avoid it.

She said at present her nation was ‘powerless and at the mercy of decisions being taken elsewhere’.

Challenged by Susanna Reid on her support for membership of the EU but not the UK, Ms Sturgeon said the EU pooled sovereignty between independent nations, but within the UK ‘Scotland’s voice is ignored’.

‘In a democracy, it’s called losing. It’s exactly what happened to your rugby team yesterday,

Ms Sturgeon replied: ‘Absolutely – I lost the referendum in 2014. But I do believe in a democracy you’re entitled to change your mind.’

Ms Sturgeon added that were Ms Morgan to be sacked from GMB – a proposal currently the subject of an online petition – she would miss their ‘early morning jousts’.

It comes as a new poll showed support for Scottish independence has reached 50 per cent. The result in 2014 was 45 per cent in favour of independence, 55 per cent against.