Long to rain over us! Photographer says he has captured face of the QUEEN in this cloud

A photographer was stunned when he spotted the face of the Queen among storm clouds.

Jan Sedlacek, 39, took the photographs when he spotted the huge thundercloud in Malvern, Worcs last month.

Yet it was only when he was editing the photos in the early hours of the morning when he spotted the stunning resemblance to Her Majesty. 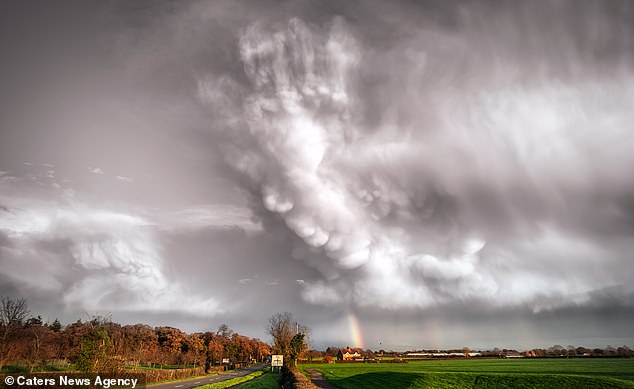 Sedlacek, who has been a professional photographer for the past 11 years, said he was taken aback after spotting the similarity between the clouds and how Queen Elizabeth II appears on coins.

Sedlacek said: ‘I saw the cloud throwing a massive shade on the landscape an hour before sunset.

‘As the light illuminated it, it created a monster of a cloud in the sky – throwing an epic shadow but also generating dramatic storm light.

‘I had been travelling down from the hills after picking my son up from school, and it was him who first pointed out it looked like a face.

‘Later, when I was editing the shots at 2am, I started to see the face of a queen, like the portrait you would see on a coin.

‘I called her “Her Majesty, Queen of the Clouds”.’

Jan, who is a landscape artist, said the photograph has amassed hundreds of likes and shares on social media for its resemblance to the Queen.

But he admitted residents under the cloud may not have been so happy – as despite the rainbows visible in the images, it brought with it hail and rain.

Sedlacek said his photograph resembled the Queen’s face on coins

He added: ‘Lots of people have said they can see a queen and it’s incredible.

‘I love clouds, and this was such an absolutely unique cloud formation.

‘It is not often you have these storm cloud shapes in the clouds over England.

‘This one was travelling at a fair distance, but close enough to make an impact.

‘On my side there was sunshine and rainbows, the queen was just travelling by.

‘But I heard from people in Evesham, under the cloud, they had a proper storm.’