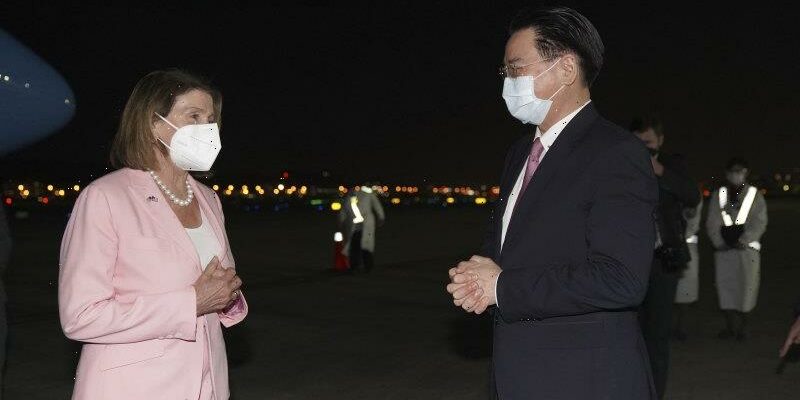 Washington: Two hours before Nancy Pelosi’s plane made its highly anticipated descent into Taiwan, the nation’s most iconic landmark – Taipei 101 – lit up to welcome the US House Speaker.

“Thank you, friend of democracy,” read one of the bilingual messages on the 508-metre skyscraper, which was once the world’s tallest building.

“Firm support for Taiwan,” declared another. 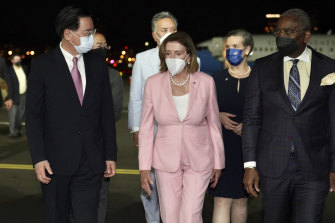 In the face of threats of retaliation from Beijing, the 82-year-old Democrat stepped off the tarmac at 10.53pm on Tuesday night, greeted by Taiwan’s foreign minister, Joseph Wu, and staff from the American Institute in Taiwan, the de facto US embassy in Taipei.

Sporting a bright pink suit, she posed for photos with her entourage before her convoy made its way to the Grand Hyatt Taipei, where large crowds had formed to catch a glimpse of the highest ranking US official to visit the country in 25 years.

But while the rockstar reception that greeted Pelosi belied the high stakes of her trip, the signs of risk were ever-present: a bomb threat at a separate airport ahead of her arrival; an alleged cyberattack on the website of Taiwan’s presidential office; China’s live-fire exercises off its north-eastern coast.

Now it’s a question of what China does next. In the lead up to Pelosi’s visit, Washington had urged Beijing not to turn her trip into a “crisis” or use it as a pretext to escalate aggressive military activity in or around the Taiwan Strait.

US officials had also sought to reassure China – which views Taiwan as its territory and demanded Pelosi stay away – that such a visit was not the first of its kind, nor would it represent any change in US policy. 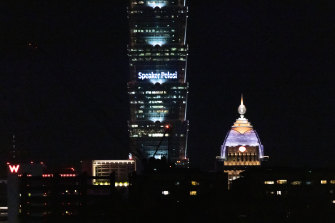 The Taipei 101 skyscraper displays a welcome message ahead of US Speaker of the House Nancy Pelosi.Credit:Getty

Not surprisingly, Beijing was not convinced – which is partly a mess of Joe Biden’s own making.

After all, the White House has been sending conflicting signals on Taiwan for some time.

Biden, for example, has repeatedly said that America has a commitment to defend Taiwan, referencing the Taiwan Relations Act, which sets the framework for the economic and diplomatic relationship between the US and the island nation.

No such commitment exists.

Last November, after a virtual summit with Xi Jinping, he also remarked that Taiwan is “independent”. This was yet another presidential gaffe. 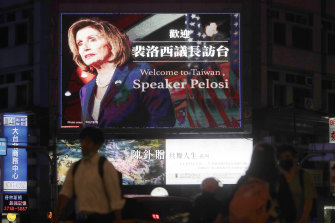 And as recently as May, during a visit to Japan with Prime Minister Fumio Kishida, Biden declared that the US would intervene militarily if China attacked Taiwan, only to have the White House once again walk back his remarks.

China-relations expert Bonnie Glaser, the director of the Asia Program at the German Marshall Fund, a Washington-based think tank, says that the lack of strategic certainty is partly the reason why China is now testing the US.

But she adds that while the messaging needs to be clearer, the relationship between and the two countries had reached such an “unprecedented level of acrimony” that even greater consistency may not have been enough to convince China that Pelosi’s visit wasn’t a big deal.

“From my perspective, the reason this is so sensitive to China is the run-up to the 20th National Party Congress, where Xi Jinping is supposed to get his third five-year term in power,” Glaser says.

“He cannot be seen as soft on the United States. He has to demonstrate his determination to defend China’s sovereignty and territorial integrity.”

To that end, the next 24 hours will be critical. With Pelosi preparing to meet Taiwan’s first female president Tsai Ing-wen on Wednesday morning, the standoff over her visit has exacerbated tensions on both sides of the Pacific at a time when the US is already consumed with two other anti-American aggressors: Russia, which continues to wage a war against Ukraine; and Iran, which has so far refused to re-enter the nuclear pact that Donald Trump cancelled and could soon take steps to build a nuclear weapon.

China, in response to Pelosi’s trip, has now announced six exclusion zones encircling Taiwan to facilitate live-fire military drills from Thursday to Sunday, with some of the areas crossing into the island’s territorial waters. 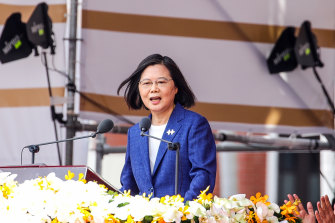 Separately, the People’s Liberation Army said exercises could begin as soon as Tuesday, leaving open the possibility of military activities around Taiwan while Pelosi was visiting.

Just don’t expect the US House Speaker to waver.

“Our discussions with Taiwan leadership reaffirm our support for our partner and promote our shared interested, including advancing a free and open Indo-Pacific,” she said in a statement issued shortly after she landed in Taipei.

“America’s solidarity with the 23 million people of Taiwan is more important today than ever, as the world faces a choice between autocracy and democracy.”