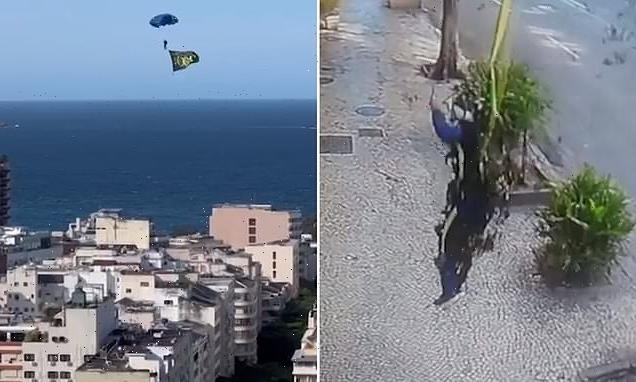 At least two paratroopers were injured after their practice jumps went awry ahead of Brazil’s bicentennial celebration.

He was rushed to Miguel Couto Hospital and is in stable condition, according to the Rio de Janeiro Municipal Health Department.

A second serviceman, Roberto Pereira, 40, fell on top of the roof of a home in the neighborhood of Ipanema. He refused assistance at the scene and boarded himself onto an Army ambulance. The extent of his injuries are unknown. 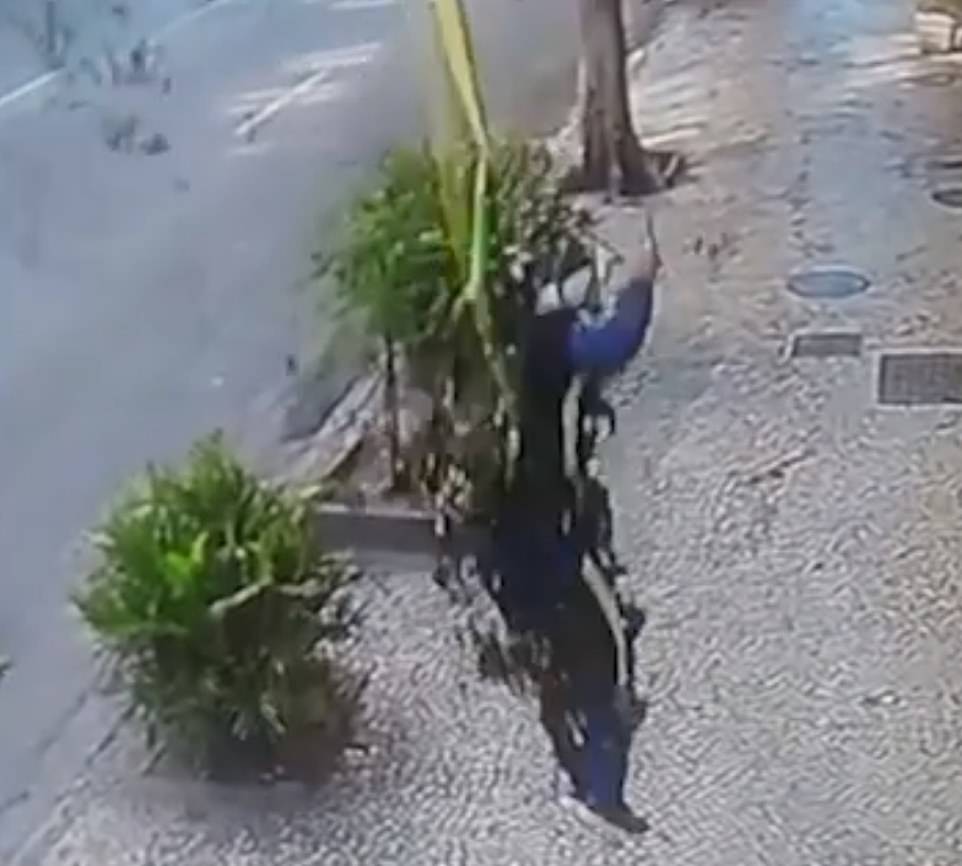 Still image from a surveillance camera shows Brazilian Armed Forces paratrooper Izaquiel Luiz before he crashes over a sidewalk in the Rio de Janeiro neighborhood of Copacabana on Tuesday. The 35-year-old joined other paratroopers in a series of practices jumps ahead of Wednesday’s parade to commemorate the country’s bicentennial. Luiz was hospitalized due to his injuries but is in stable condition 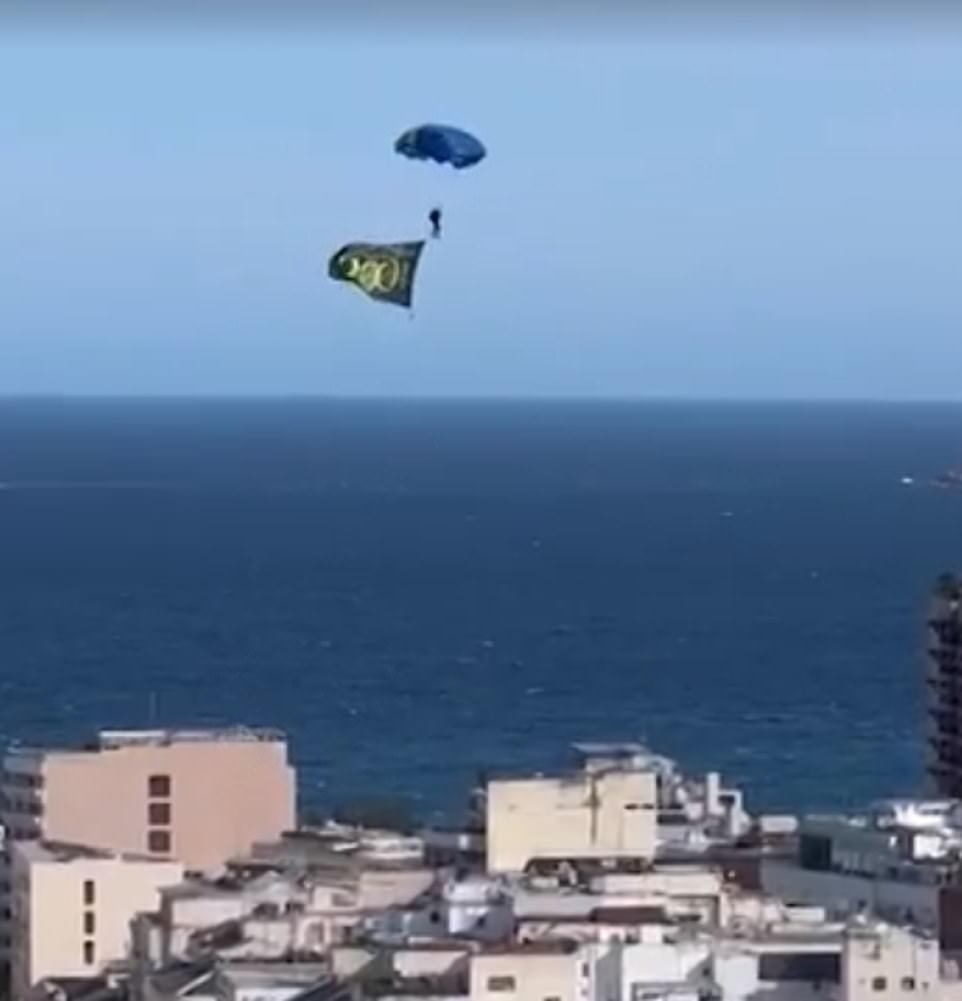 A paratrooper is seen in a cellphone video gliding over a Rio de Janeiro neighborhood before he made a sudden landing on a busy street Tuesday afternoon. The Eastern Military Command said the practice jumps were altered due to the strong wind gusts, which prevented the team from landing on Copacabana beach

Additional video showed one paratrooper making a sudden landing in the middle of a street while another was spotted dangling from a free before firefighters were able to set him free.

The paratroopers are part of the Army’s and Air Force’s free-jump teams and were planning to land along Copacabana beach before the strong wind gusts disrupted their landing, according to the Eastern Military Command.

‘It is noteworthy that the teams are composed of high-level athletes and participate in national and international competitions with expressive results,’ Eastern Military Command said.

The training session took place a day before the Armed Forces parade that will be part of the several festivities taking place to commemorate the South American nation’s independence. 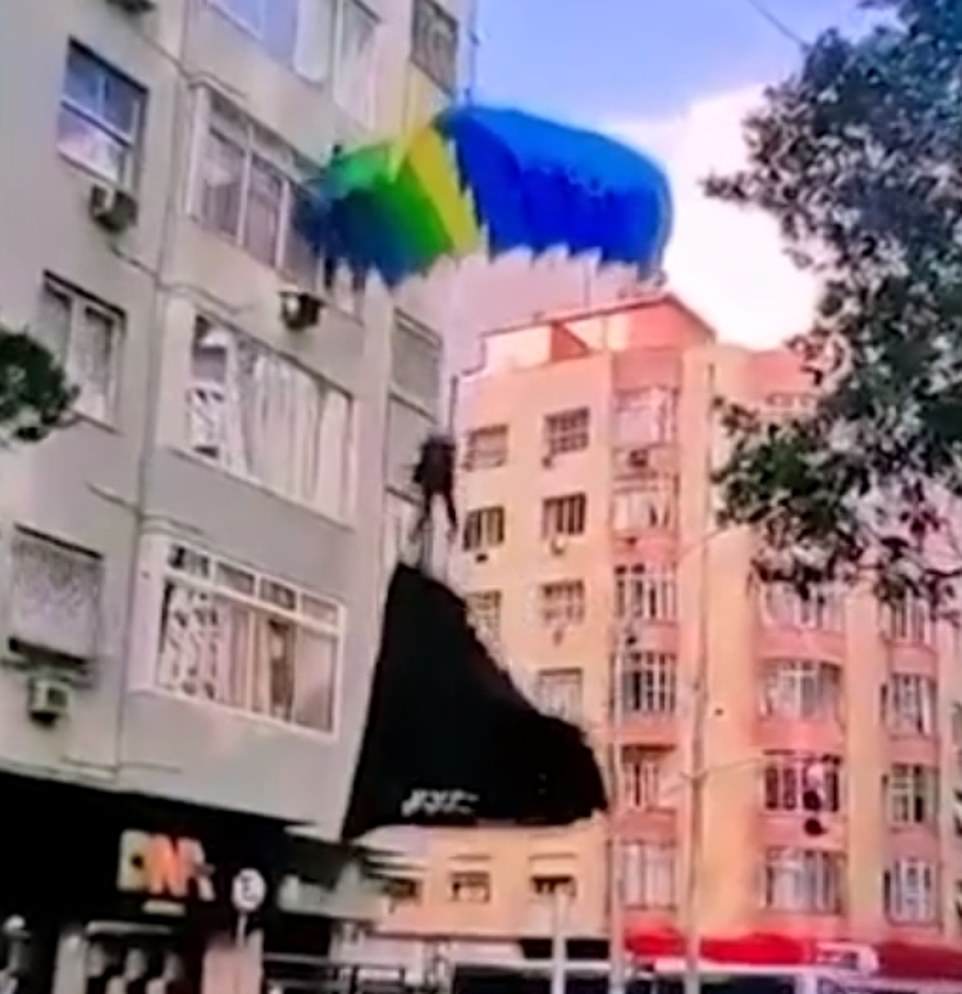 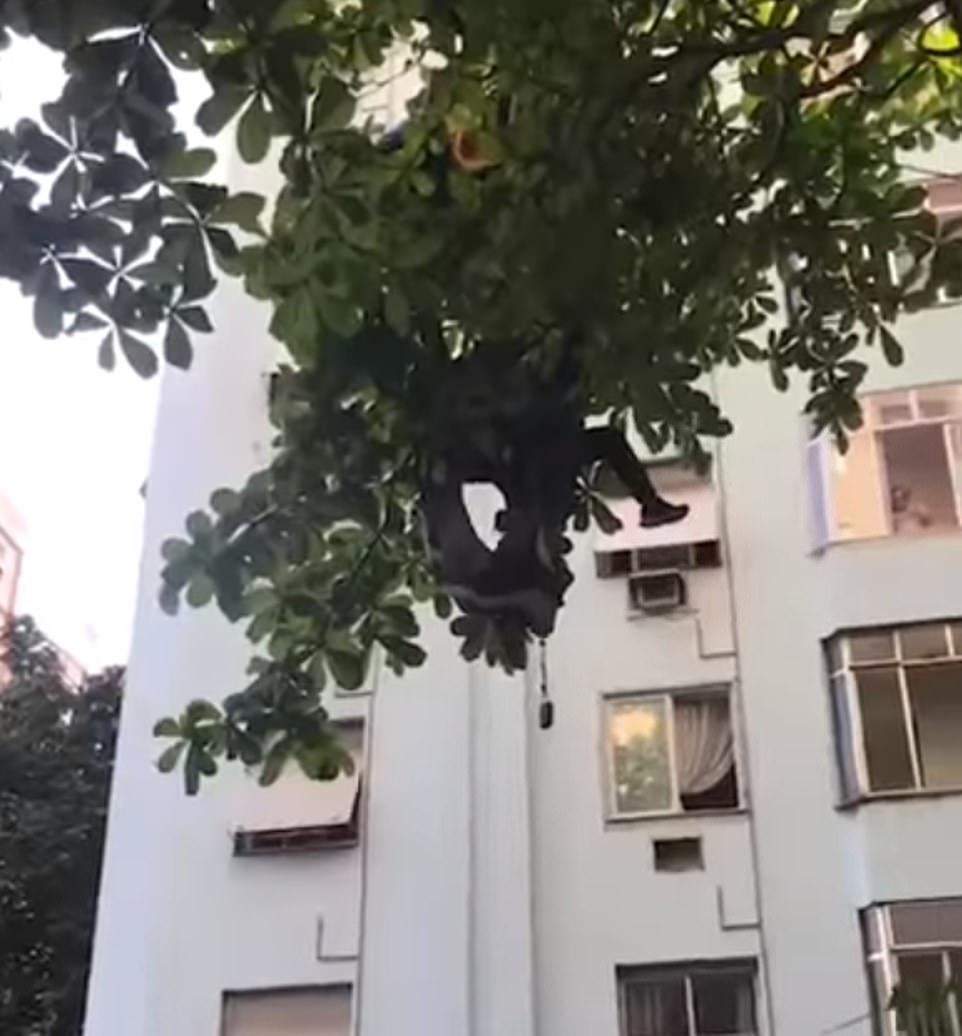 President Jair Bolsonaro, who is seeking reelection October 2, attended a parade in Brasilia on Wednesday morning and was also expected to make appearances in Rio de Janeiro and São Paulo later in the day.

Thousands of supporters of the far-right leader gathered early on Wednesday and joined him at rallies mixing Independence Day military displays with political demonstrations.

The police in the capital Brasilia redoubled security on the central mall to keep Bolsonaro supporters from advancing toward the Supreme Court, as they attempted to do a year ago. The march was inspired by the January 6, 2021 assault on the U.S. Capitol. 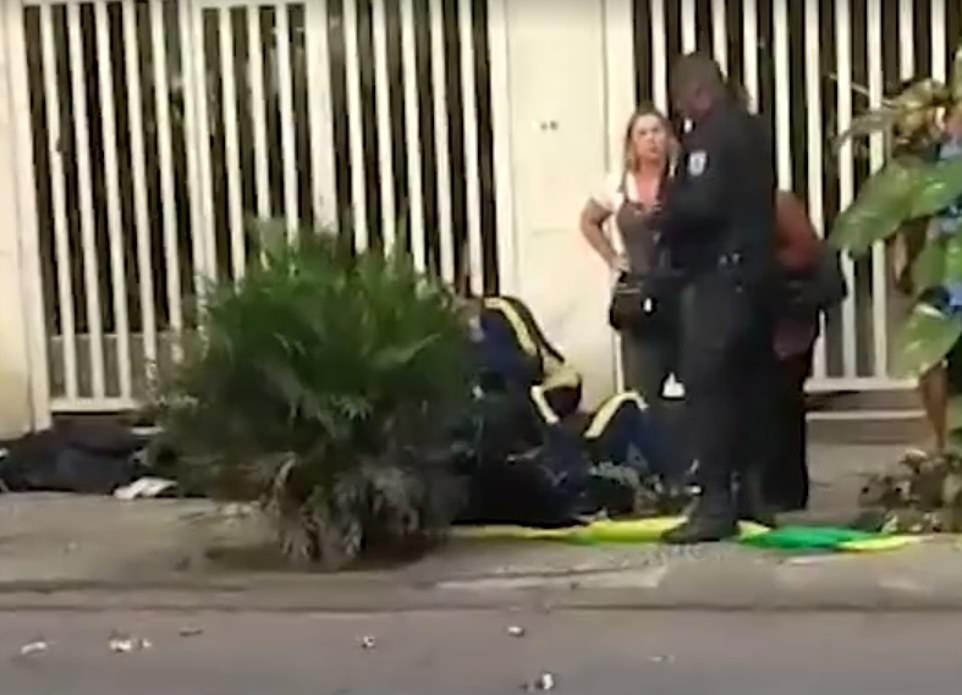 First responders tend to Izaquiel Luiz moments after he crashed across a sidewalk in Rio de Janeiro. The 35-year-old was among two paratroopers who were injured during Tuesday’s practice jump in preparation of Wednesday’s festivities that will celebrate the country’s bicentennial 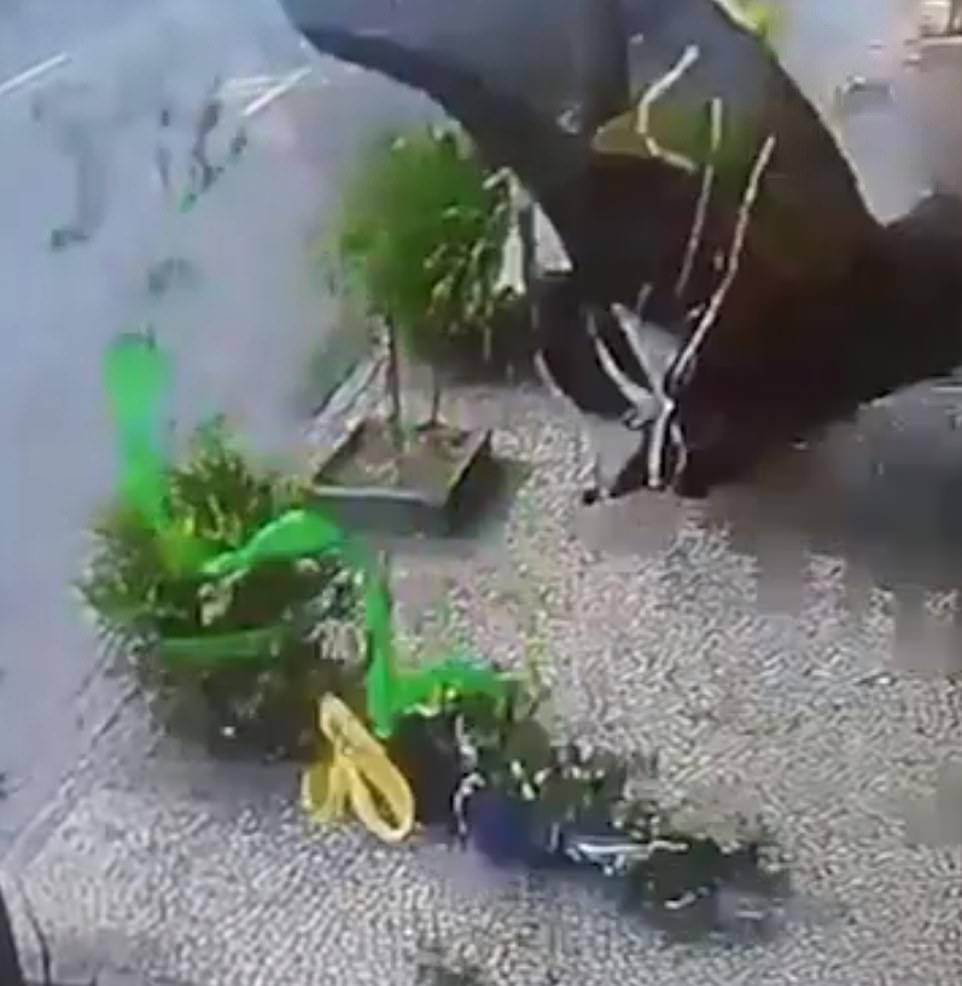 On Tuesday night, Bolsonaro told security officials to let tractor-trailer trucks driven by his supporters enter the grassy esplanade where hundreds of thousands are expected to attend his rally in the early afternoon.

However, federal district Governor Ibaneis Rocha, an ally of the president, countered Bolsonaro’s instructions and maintained a ban on unauthorized vehicles entering the central area.

Bolsonaro appeared briefly on foot alongside supporters at the mall before presiding over the military parade to celebrate 200 years of Brazil’s independence from Portugal, including a 21-gun salute and flyovers by air force planes. 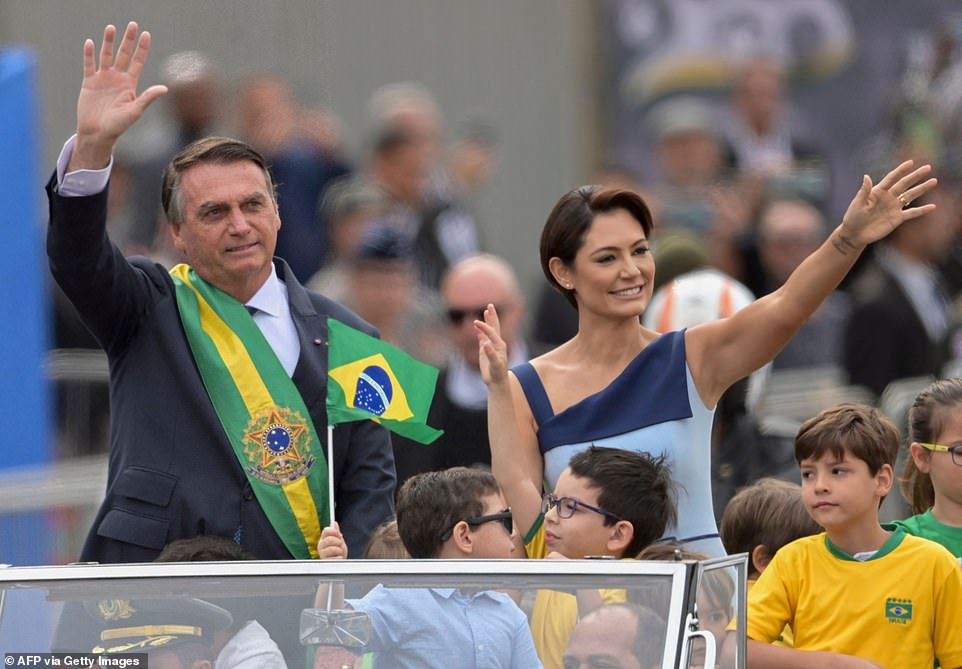 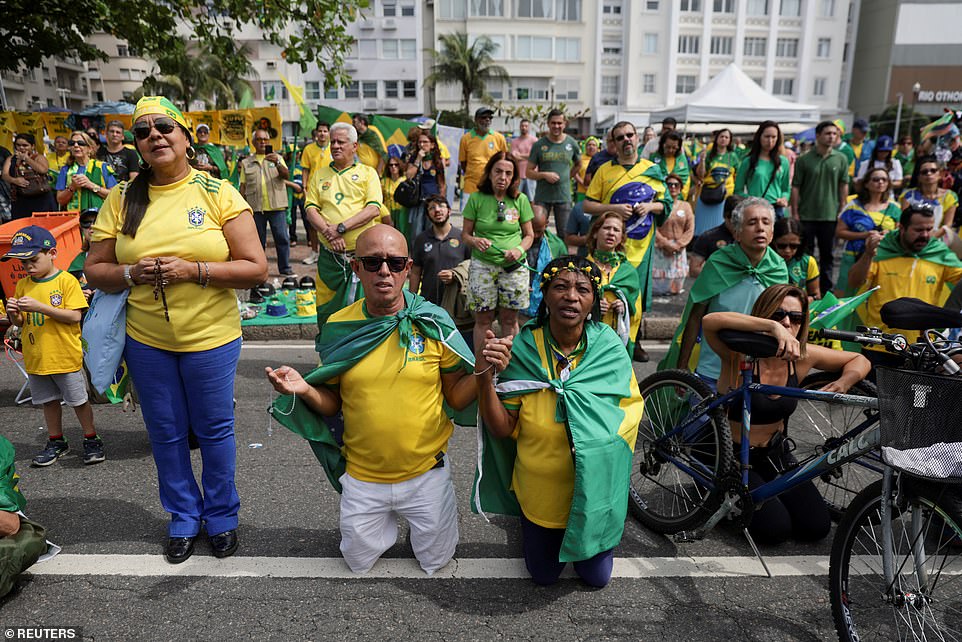 Supporters at the Wednesday morning parade briefly drowned out a military chorale by chanting ‘Our flag will never be red!’ – a jab at the colors of Lula’s Workers’ Party.

Political rallies scheduled in Brasilia, Sao Paulo and Rio de Janeiro are expected to gauge core support for Bolsonaro and his attacks on Brazil’s democratic institutions, possibly signaling how far he could go in challenging electoral results.

Bolsonaro’s criticism of Brazil’s voting system – and the courts that oversee it – have stirred calls for a military coup from his radical backers. Some fear he is laying the groundwork to claim electoral fraud like his U.S. ally, former President Donald Trump, and reject a potential Lula victory at the polls next month.

The rallies could fire up Bolsonaro’s supporters, but he faces the risk of boosting high rejection numbers if his rhetoric runs hot, as it did on Independence Day last year.

At that time, he insulted Supreme Court Justice Alexandre Moraes and threatened to disobey his rulings – comments he soon walked back under intense political pressure.