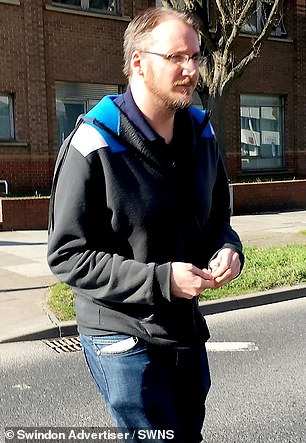 Darren Brazier, 36, from Swindon, (seen outside the crown court yesterday) has been given another chance to avoid jail by a judge after police found him with child abuse images a second time

A paedophile ‘addicted’ to child abuse images has been spared jail for a second time despite downloading more than a million sick pictures.

Darren Brazier, 36, from Swindon, was given a second chance by a judge in 2010 after he was found with upwards of 100,000 vile pictures and movies.

But within just five months he was back online downloading vast quantities of images of child rape on to his computers, tablets and phone.

And when police finally caught up to him almost seven years later, they found Brazier had racked up a huge new collection.

But a judge at Swindon Crown Court has now given Brazier a third and final chance to avoid jail – after hearing he has been seeing a counsellor in the 17 months since his latest arrest.

Brazier has been handed another suspended jail term after pleading guilty to making indecent images of children and having prohibited images.

Tessa Hingston, prosecuting, said in November 2017 police made an unannounced visit to his home and asked to see his computer.

They immediately saw he had been looking for the depraved material from the search terms he had used, and seized his devices.

They took two laptops, two tablets a mobile and a computer tower which when searched were found to contain more than a million pictures and movies.

She said the search terms had included looking for ‘preteen’ material as well as ‘daddy daughter’ images.

When he was questioned he said that he had slipped back into his old habits despite having strong support in place from his family.

Defending Brazier, Lucie Stoker said that in January last year he started seeing a counsellor as he tried to address his addiction.

She said when he became depressed he returned to seeking out the material and the last time he downloaded it was five months before his arrest.

The court heard that the current sex offenders programme was less rigorous than the one he completed last time, but similar to anything done in custody.

Judge Jason Taylor QC said: ‘These offences began just five months after that sentence was imposed and despite the specialist help you were getting for that order.

‘I accept you are genuinely remorseful. You have taken steps to address your offending behaviour. I have seen a letter from your therapist which encourages me.

‘I am encouraged that the last download was in June 2017, that was several months before your arrest in November 2017.’

The judge imposed a 22-month jail term suspended for two years and told him to complete the Horizon sexual offenders’ programme.

He must also abide by a sexual harm prevention order for 10 years and register as a sex offender. 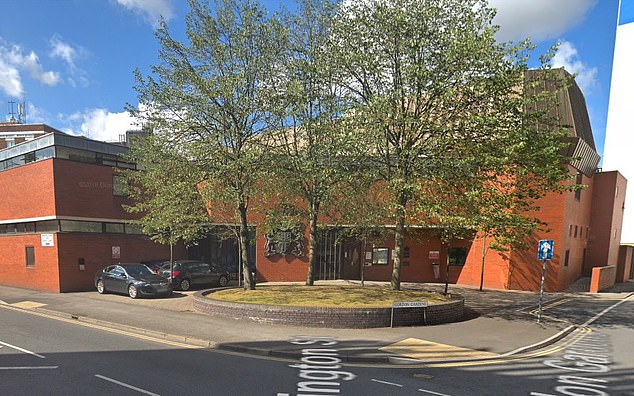