Outdoor socially distanced fitness classes with up to six adults at a time will be rolled out at David Lloyd health clubs this week.

The chain said an expanded range of outdoor activities will be introduced at 50 of its fitness clubs in the UK over the coming days.

Up to 90 classes – ranging from ‘boot camp-style’ workouts to Pilates and yoga – will be available each week, taking place around the clubs’ external pools, garden areas and tennis courts. 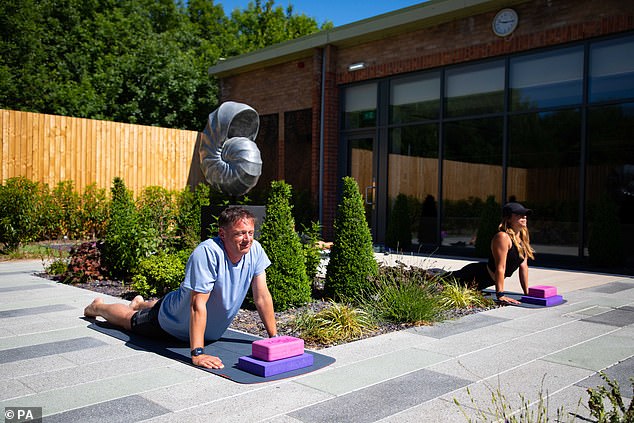 A David Lloyd Club in Chigwell, Essex, prepares for re-opening with a range of new outdoor activities, which are to be rolled out in over 50 of the company’s health and fitness clubs 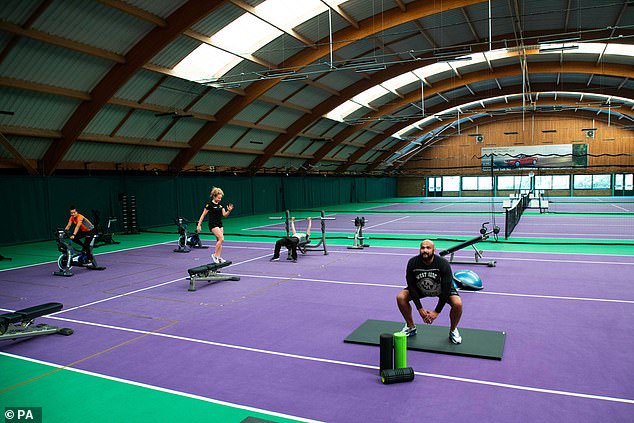 The company will introduce the fitness classes in line with the Government’s social distancing and cleansing regulations, with the outdoor activities initially for groups of up to 6 adults

Once gyms are allowed to reopen, the company said 80 percent of its clubs will also operate ‘second gyms’ in their indoor tennis courts, with equipment spaced apart to meet social distancing measures.

Glenn Earlam, chief executive of David Lloyd Leisure (DLL), said: ‘Obviously the recent good weather makes it a great time to launch, but none of these new activities are weather dependent, and we plan to continue running them into the future.

‘More and more exercise is going outside and we firmly believe the ‘new normal’ in exercising will be all about embracing the great outdoors.’

The company, which has more than 660,000 members across seven European countries, operates more than 100 clubs in the UK.

Mr Earlham said while the outdoor activities will initially be for up to six people, they have been designed to work for larger groups should the Government permit it.

The chain said it had doubled the number of its cleaning staff and introduced screening in its reception and cafe areas.

Under the latest Government guidance, gyms and swimming pools in England can now be used to train elite athletes, but remain closed to the general public.

Mr Earlham said the company was ‘well ahead’ with its planning to reopen all of its facilities – including gyms – once the Government rules change. 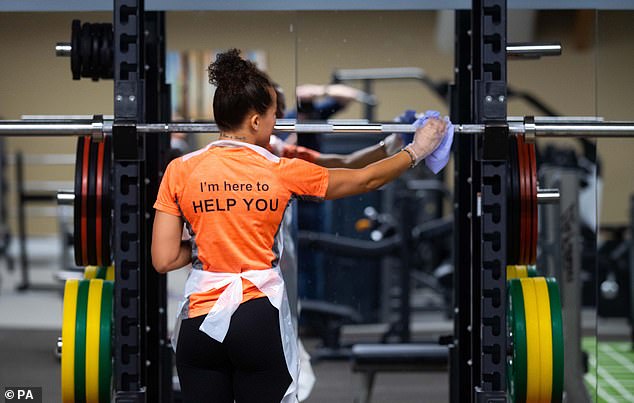 A worker cleans the gym equipment as a David Lloyd Club in Chigwell, Essex, prepares for re-opening. The company operates more than 100 clubs in the UK 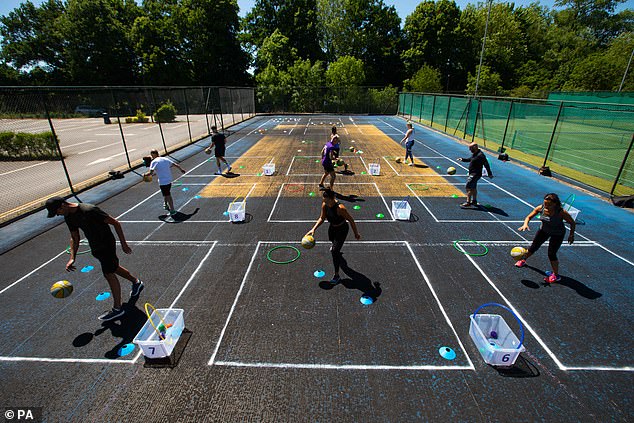 The outdoor activities will have up to 90 classes a week on offer, including bootcamp style workouts, BLAZE, HIIT, cycling, Yoga and Pilates 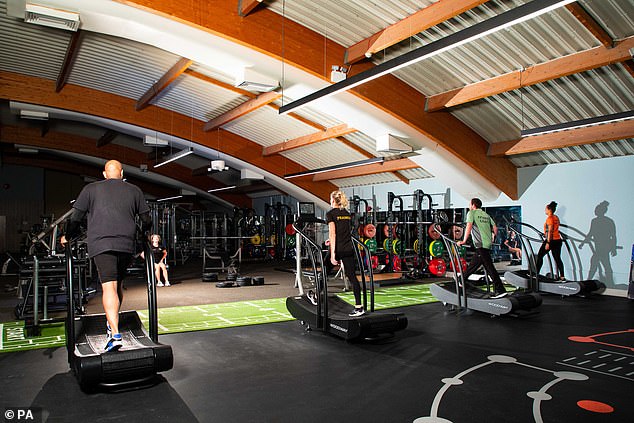 Gym-goers work out within social distancing guidelines at the David Lloyd Club in Chigwell, Essex. Gyms and leisure centres across the UK could be re-opened as early as July

He said there was now a ‘greater emphasis’ on cleaning and social distancing protocols, adding: ‘We are uniquely placed to ensure this as our clubs are large spaces – many of over 100,000sq ft, mainly with large outdoor areas.

‘This means not only do our members naturally have lots of room to spread out, but we will also be operating new schedules when we reopen allowing us for example to not only halve the number of people in classes, but also leave time between classes for a robust cleaning process.’

Gyms and leisure centres across the UK could be re-opened as early as July in a plan to open up ‘grassroots sport’, according to The Guardian.

Football and rugby teams could also be allowed to train in groups of five if the infection rate continues to decrease but players of contact sports, such as boxing, will likely have to wait for at least three months, until September or October.

Although gyms were originally said to re-open in October, there have been suggestions that, depending on the outlook at the time, the date could be moved forward as health facilities have been ‘working really hard’ to introduce ‘sensible solutions’.