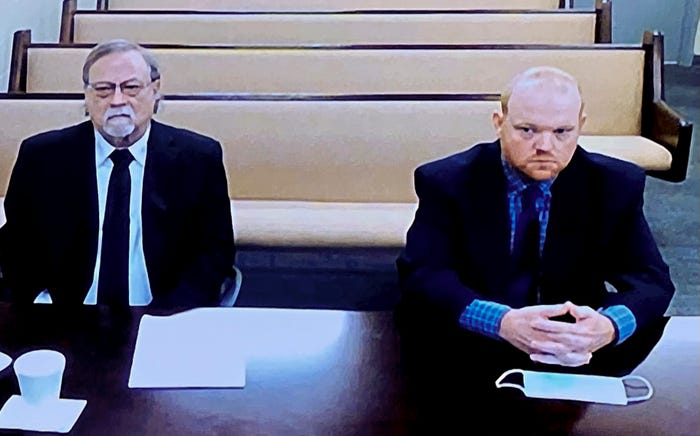 Travis McMichael, one of the three men indicted in the death of Ahmaud Arbery, made racist social media posts and sent racist text messages in the months before Arbery's killing, prosecutors said Thursday.

The messages were brought up by Jesse Evans, a prosecutor at the Cobb County district attorney office, in a bond hearing for Travis McMichael and his father, Gregory McMichael.

The father-son duo are charged with murder and aggravated assault alongside William "Roddie" Bryan, who filmed the encounter between the two and Arbery. Bryan was denied bond in a July court hearing.

Evans said the messages were evidence of racist beliefs, and that the McMichaels should be denied bond. Judge Timothy Walmsley was expected to make a decision later Thursday, but the court went into recess and is expected to resume proceedings Friday morning.

Evans brought up one text message Travis McMichael sent a friend, Zachary Langford, in 2019, which used a racist slur and apparently described a Black person as a "crackhead" with "gold teeth," according to the Associated Press.

Langford testified that McMichael was "referring to a raccoon."

Evans also cited a Facebook post from Langford where Travis McMichael responded with: "Sayonara, you slanty-eyed f—s," according to the Associated Press. Langford said he didn't recall the message.

It took months for the McMichaels to be indicted

Arbery, a 25-year-old Black man, was jogging through a Georgia neighborhood on February 23. Gregory and Travis McMichael told police they believed him to be a burglary suspect, so they went after him. After a scuffle, Travis shot Arbery, who was unarmed, three times with his shotgun, killing him.

Bryan filmed the encounter and Arbery's killing. He told authorities he heard Travis McMichael using a racist slur after the shooting.

In Thursday's bond hearing, defense attorneys for the McMichaels sought to show that they weren't flight risks. They pointed out that Travis McMichael lived with his parents and his three-year-old son, and did not have a passport.

Allison McMichael, Gregory's wife and Travis's mother, testified about Travis's work at a summer camp for kids who had lost family members, and his work at the US Coast Guard, where he's received three good conduct awards. Their defense lawyers also sought to bring Arbery's mental health considerations into the hearing, which the judge rejected.

The defense lawyers also pushed the theory that Arbery was not just a jogger, and that the McMichaels had grounds to believe he may have been responsible for crimes committed in the neighborhood.

"We have substantial evidence on that particular day Mr. Arbery was not a jogger. He was there for nefarious purposes," Bob Rubin, one of Travis McMichael's attorneys, said in court.

"I live right there in the community," Cooper-Jones said. "Nobody reached out to say, 'I'm sorry for your loss.' I don't think they are remorseful at all."

The hearing is one of the first steps in the case after months of delays. Jackie Johnson, the Glynn County prosecutor, declined to pursue charges against the McMichaels after Arbery was shot dead while jogging in the middle of the day on February 23. The case was passed over by another two district attorneys before a video of the altercation went viral in early May, leading state prosecutors to pick it up.

The Georgia Bureau of Investigation arrested the McMichaels on May 7, and arrested Bryan days later. They have been jailed since.

The case was ultimately assigned to the Cobb County District Attorney Joyette Holmes and Walmsley, a Chatham County judge.