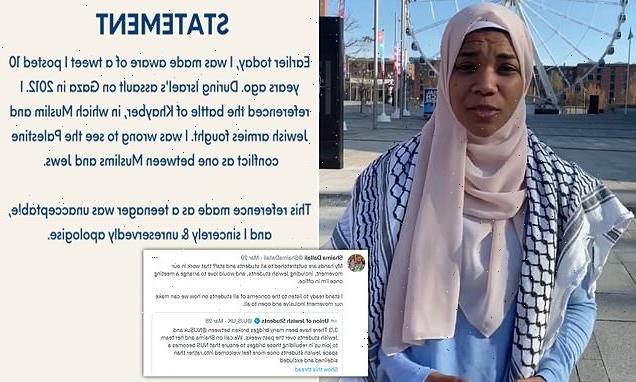 A newly-elected NUS chief who called a Hamas critic a ‘dirty Zionist’ on Twitter and ‘raised money for terrorist sympathisers’ has been slammed by Jewish students over ‘anti-Semitic’ social media posts.

Shaima Dallali was voted president-elect of the NUS on Monday, but Jewish students have raised concerns after historic tweets emerged referencing the massacre of Jews in the 628 Battle of Khaybar.

She apologised for the ‘wrong’ and ‘unacceptable’ post this week, which has since been deleted, saying the tweet was made as a teenager.

Ms Dallali, who is currently president of the City University Student Union, has also been accused of writing that she was raising money for Cage during Ramadan in April 2020 – a group critical of the UK’s anti-terror policies.

Cage faced fierce criticism when its research director called Jihadi John, a man known as Mohammed Emwazi who is believed to have carried out beheadings of multiple western hostages in Syria, a beautiful young man who was ‘extremely kind and gentle’.

The group denies that it supports terrorists and says its goal is to ‘simply ensure that the pursuit of justice is carried out fairly’.

The Jewish Chronicle yesterday claimed Ms Dallali had ‘sung the praises of a Jew-hating cleric’ and labelled Waseem Yousef as a ‘dirty Zionist’ after he wrote that Hamas was launching rockets from between residents’ homes and was making a ‘graveyard’ for children in Gaza.

It also said she praised Yusuf al-Qaradawi, who was expelled from the UK, US, France and Germany, for being a ‘moral compass for the Muslim community at large’ in a 2018 article. 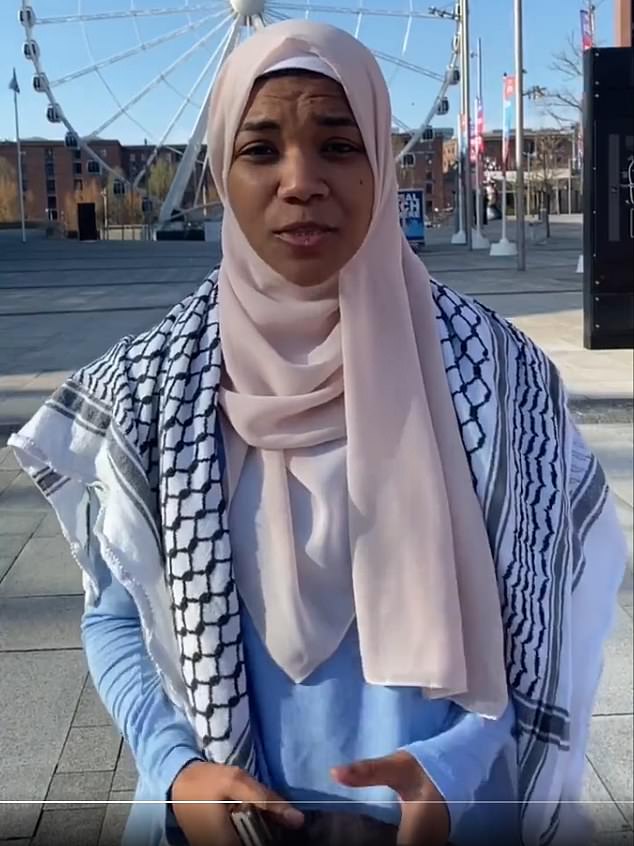 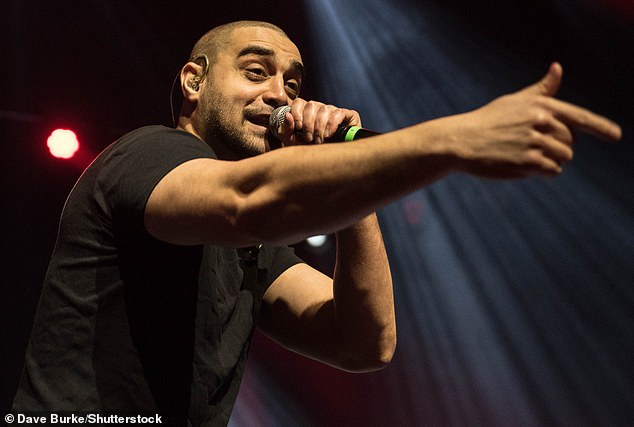 Lowkey (pictured performing on stage) pulled out of his scheduled appearance as a guest at the annual NUS conference, with the union later releasing a lengthy statement in which it acknowledged the ‘strong response’ to his announcement 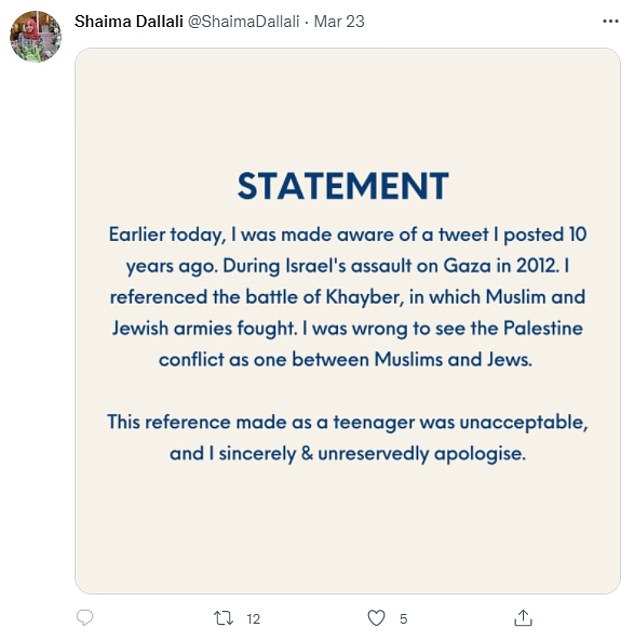 It comes after the NUS was slammed by Jewish student groups earlier this month, who said they had been ‘failed’ after the union invited controversial rapper Lowkey to appear at its conference for students from marginalised groups in Liverpool on Wednesday.

The rapper, whose real name is Kareem Dennis, has previously expressed support for former Labour MP Chris Williamson, who was suspended from the party in 2019 before being kicked out over allegations of anti-Semitism, and Professor David Miller, a former sociology lecturer at Bristol University who was sacked after alleged antisemitic comments.

And in an online interview with the anti-Israel activist Asa Winstanley, Lowkey claimed mainstream media had ‘weaponised the Jewish heritage of [Volodymyr] Zelensky, the President of Ukraine, to try to stave off these genuine inquiries into the nature of the groups fighting in Ukraine…’

Lowkey pulled out of his scheduled appearance, though, with the NUS later releasing a lengthy statement in which it acknowledged the ‘strong response’ to his announcement as a guest and apologised to students ‘hurt by some of the things they’ve read about NUS’.

Reacting to a tweet announcing Ms Dallali’s election victory, the Union of Jewish Students said a number of students had reached out citing concerns over her alleged support for speakers with ‘extremely challenging views’.

The union said: ‘Jewish students have spoken to us and raised their concerns over much of the messaging Dallali has put out on her social media in the past attacking the Jewish community, UJS, and supporting speakers with extremely challenging views.

‘We hope that she will come to the table, work with UJS and understand how to support Jewish students.

‘There have been many bridges broken between the NUS and Jewish students over the past weeks.

‘We call on Shaima and her team to join us in rebuilding those bridges to ensure that NUS becomes a space Jewish students once more feel welcomed into, rather than sidelined and excluded.’

In a tweet on Tuesday addressing concerns, she said: ‘My hands are outstretched to all students and staff that work in our movement, including Jewish students, and would love to arrange a meeting once I’m in office. 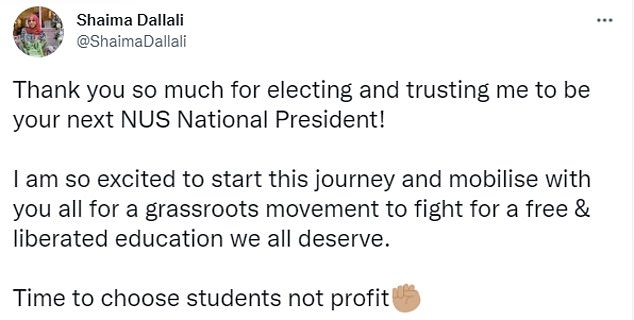 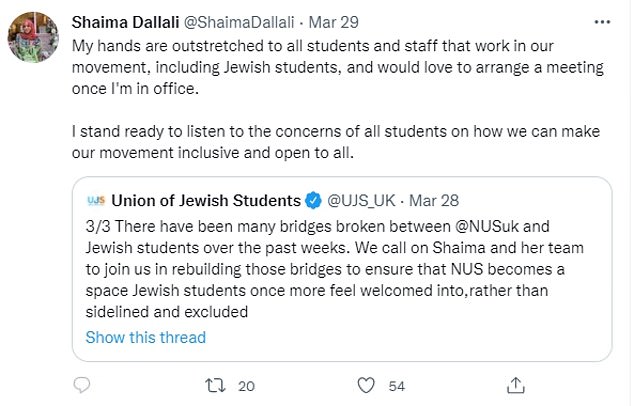 ‘I stand ready to listen to the concerns of all students on how we can make our movement inclusive and open to all.’

And addressing the tweet on the Battle of Khayber on March 23, she added: ‘Earlier today, I was made aware of a tweet I posted 10 years ago.

During Israel’s assault on Gaza in 2012. I reference the battle of Khayber, in which Muslim and Jewish armies fought. I was wrong to see the Palestine conflict as one between Muslims and Jews.

‘This reference made as a teenager was unacceptable, and I sincerely & unreservedly apologise.’

A spokesperson for the NUS today said it was aware of the allegations and revealed Ms Dallali has been receiving racist abuse.

A statement added: ‘We are so sorry to any students, particularly Jewish students, who have been hurt by what they’ve read in the lead up to conference.

‘We will be reviewing what more the NUS can do in the future to ensure Jewish students feel welcome in our spaces and to improve relations with Jewish students.’

And in its statement confirming the withdrawal of Lowkey from its annual conference last week, the NUS said: ‘Lowkey was due to speak at our Liberation Conference on 30 March in Liverpool but has taken the decision to pull out.

‘This matter has received some social media and press coverage and is connected to some deeply complex issues that are much much bigger than NUS and our events. In the midst of this coverage, our first concerns always lie with students.

‘Since we promoted Lowkey as a speaker, there has been a strong response to some of his recent actions and associations. Like with most issues discussed on social media or the press, there is a mix of facts, opinions and misinformation in circulation.

‘We are horrified to know that some students in our community, particularly Jewish students, may now be wondering if they will be fully comfortable at our upcoming events. We’re very sorry to any students who are hurt by some of the things they’ve read about NUS in the last few days.’