North Koreans desperate to meet scrap metal quotas are plundering in the wreckage of the liaison office with the South that was blown up on Kim Jong-un’s orders.

Residents of Kaesong are risking arrest by scavenging in the ruins of the Inter-Korean Liaison Office which was set up in a spirit of unity in 2018 but destroyed in a ‘terrific explosion’ on June 16.

Locals are resorting to desperate measures because of growing pressure to collect their 90lbs scrap metal quota after a shortfall in the first six months of this year.

Dissident media has reported that city officials were ‘severely reprimanded’ by the central government after Kaesong came last in the scrap metal collection drive. 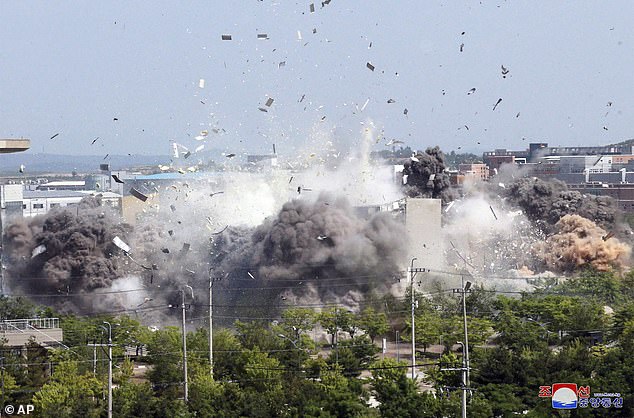 Sources told the Daily NK news site that city leaders summoned those responsible for the scrap metal campaign to point out their failings.

They were ordered to make sure that Kaesong is in the top five districts of the country by the end of the year.

But there is growing resentment among citizens at the ‘unreasonable’ quotas being imposed on them – as well as speculation over what the metal is going to be used for.

Some people believe that the regime, which is under strict UN sanctions over its nuclear weapons and long-range missile programmes, is scraping together any materials it can lay its hands on to build weapons, including rockets.

Keen to avoid the attention of the central government for failing to reach their targets, many of Kim Jong-Un’s subjects reached the conclusion that one part of the city with plenty of scrap metal would be the area surrounding the liaison office.

Experts believe that engineers used too much explosive material in an effort to make sure that the structure – built with South Korean taxpayers’ money – was completely demolished. 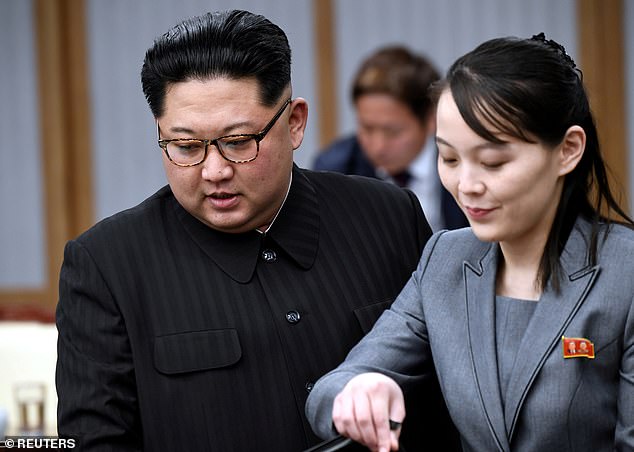 There are reports of residents roaming the area with wheelbarrows looking for shards of metal.

The authorities have responded, however, by placing a cordon around the site and deploying teams from the Ministry of State Security to stop anyone approaching.

Still, with quotas to meet, some people are becoming desperate, the source told Daily NK.

‘Some people have decided that the best course of action may be a ‘surprise raid’ on the site at night to steal the scrap metal’, the local resident said. ‘They are making plans to do that’.

North Korea blew up the liaison office in June amid official anger at defectors who were sending propaganda leaflets into the North.

The liaison office in Kaesong – a gleaming blue-glass four-storey structure in an otherwise drab industrial city – was ‘ruined with a terrific explosion,’ state media said.

Referring to defectors, KCNA said the office was blown up to force ‘human scum and those who have sheltered the scum to pay dearly for their crimes’.

Several defector-led groups have regularly sent flyers over the border, together with food, $1 banknotes, mini radios and USB sticks containing South Korean dramas and news, usually by balloon or in bottles by river. 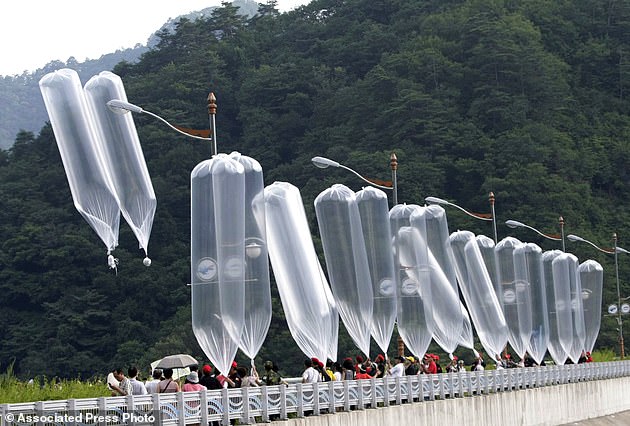 The Kaesong building was originally used as offices in the Kaesong Industrial Complex, a venture between the two Koreas suspended in 2016 amid disagreement over North Korea’s nuclear and missile programmes.

South Korea spent at least 9.78billion won ($8.6million) to renovate it in 2018. South Koreans worked on the second floor and North Koreans on the fourth floor.

Destruction of the building, which had been empty since January due to coronavirus fears, represented a major setback to the South’s efforts at co-operation.

State media today reported that Kim Jong-un had visited parts of North Korea where torrential rain has flooded hundreds of houses and vast areas of farmland.

The last time state media reported such a visit was in September 2015, according to Seoul’s Unification Ministry.

Kim visited the scene and ordered shelters to be arranged for displaced people and residents to be supplied with grain from his own reserves, it was claimed.

The North’s economic woes are believed to have worsened due to the coronavirus pandemic and flooding would only add to those troubles.

The pandemic forced North Korea to close its border with China, its biggest trading partner, although the secretive state has not officially admitted to having any cases.

The two Koreas remain technically at war because their 1950-53 conflict ended in a truce, not a treaty.