With Washington Nationals slugger Juan Soto suddenly on the trading block, the market has evolved as teams weigh paying a premium for the 23-year-old superstar who isn’t a free agent until after the 2024 season.

The New York Yankees acquired Andrew Benintendi from the Kansas City Royals on Wednesday night, the first in what could be a flurry be of big trades in the days to come.

Some of the top trade candidates include pitchers Luis Castillo and Frankie Montas, catcher Willson Contreras and first baseman Josh Bell, with some of MLB’s top teams rumored to be in the running.

Here’s a look at some deals that would make sense ahead of Tuesday’s deadline:

BUY OR SELL?Five struggling teams stuck in the middle as trade deadline approaches 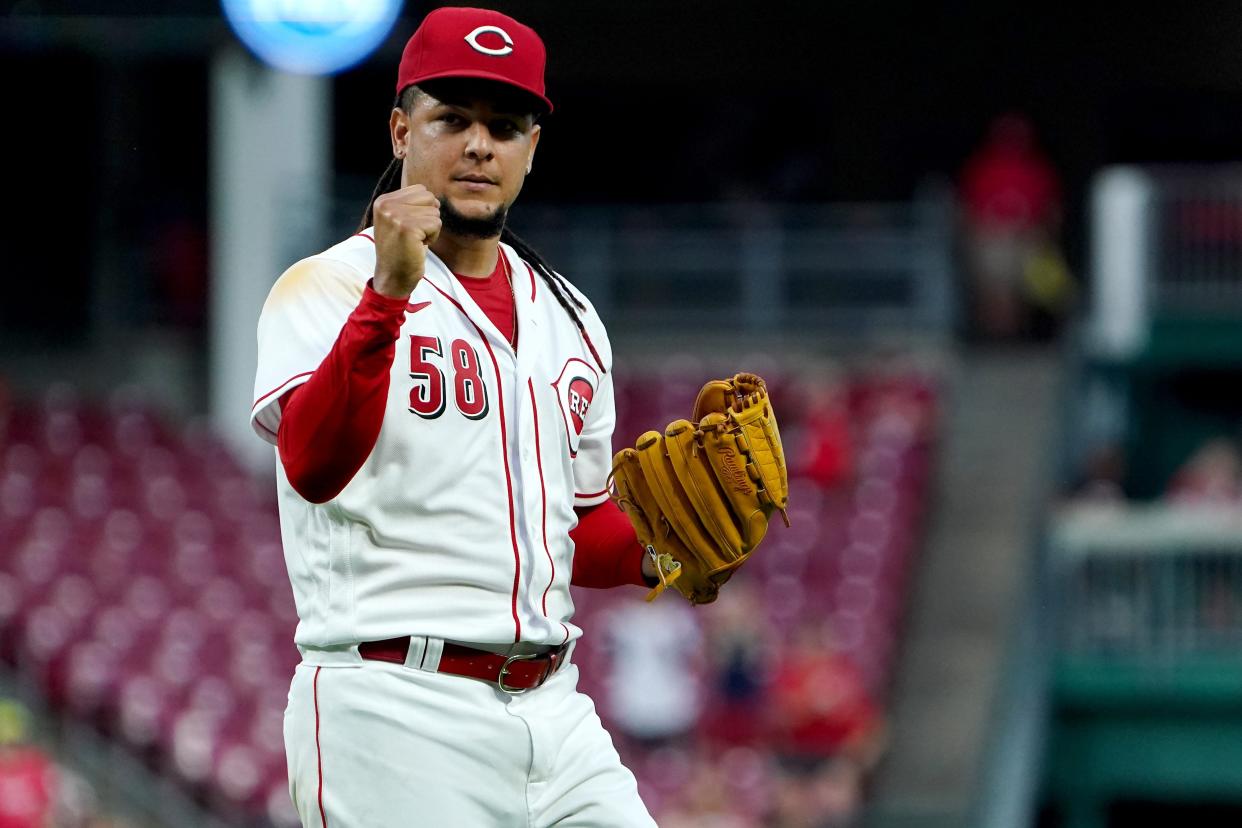 The top pitcher on the trade market, Castillo isn’t a free agent until the 2023-24 offseason and would give the Yankees a formidable front three with Gerrit Cole and Nestor Cortes that could hang with the Astros – and/or any other rotation come October.

A two-time All-Star at 29, Castillo has a career-best 2.86 ERA with 90 strikeouts in 85 innings across 14 starts for Cincinnati.

“Obviously I would want to be in a Reds uniform for the rest of my life,” Castillo said after his start Wednesday. “But baseball is a business. You have to keep going with what you’re told to do.” 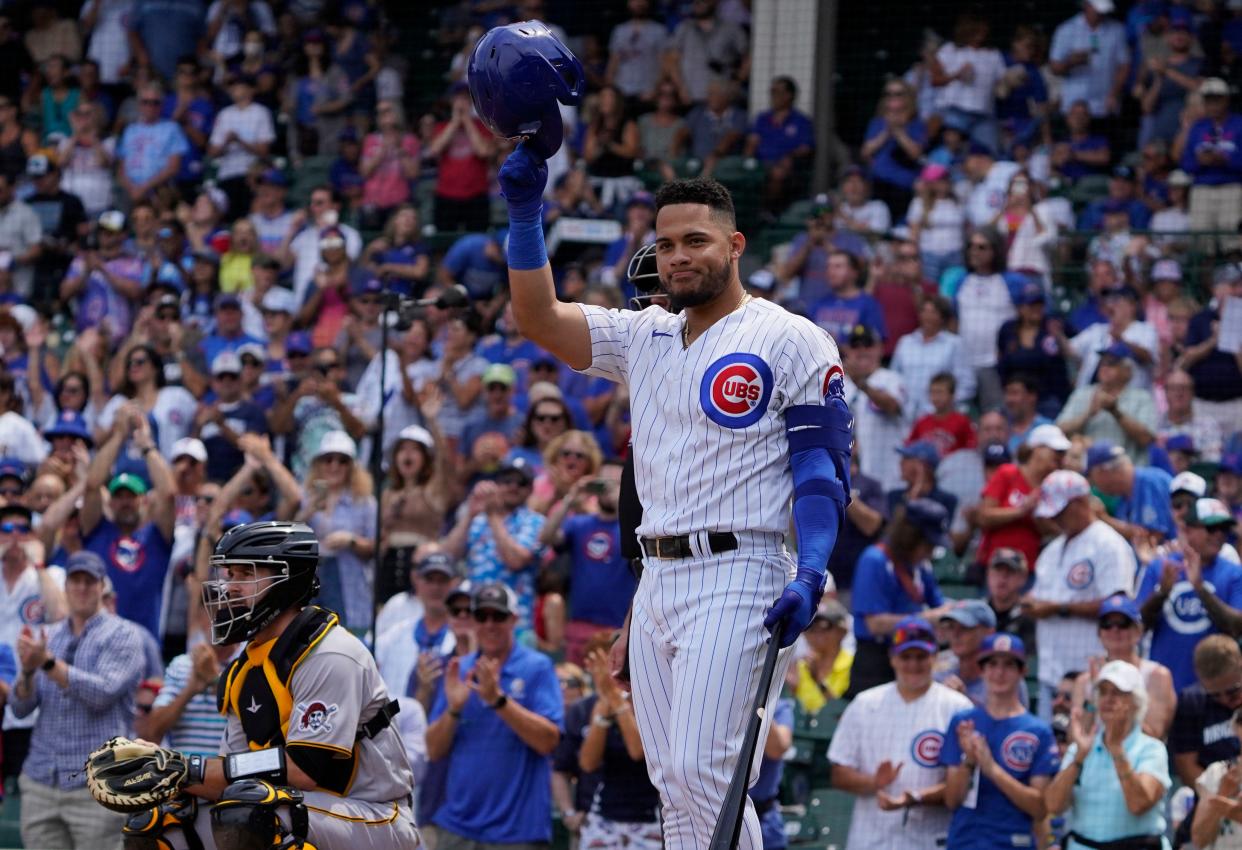 Mets catchers have a combined .511 OPS this season, so getting the best offensive backstop available seems like an obvious move for the the NL East leaders. MLB.com’s new No. 1 prospect Francisco Alvarez has struggled (5-for-38) since his promotion to Class AAA, quieting some calls to rush him up to the majors down the stretch.

Contreras is a free agent after this season and while the price could be cost-prohibitive, it’s worth noting that the Mets and Cubs were able to get a rental deal done last year with Javier Baez.

Yuli Gurriel isn’t producing (.237 average) after winning the batting title last year, so this would be a huge upgrade at first base for Houston.

A switch-hitter, Bell would provide balance to an Astros lineup currently heavy on right-handers, creating some matchup problems for potential postseason opponents. 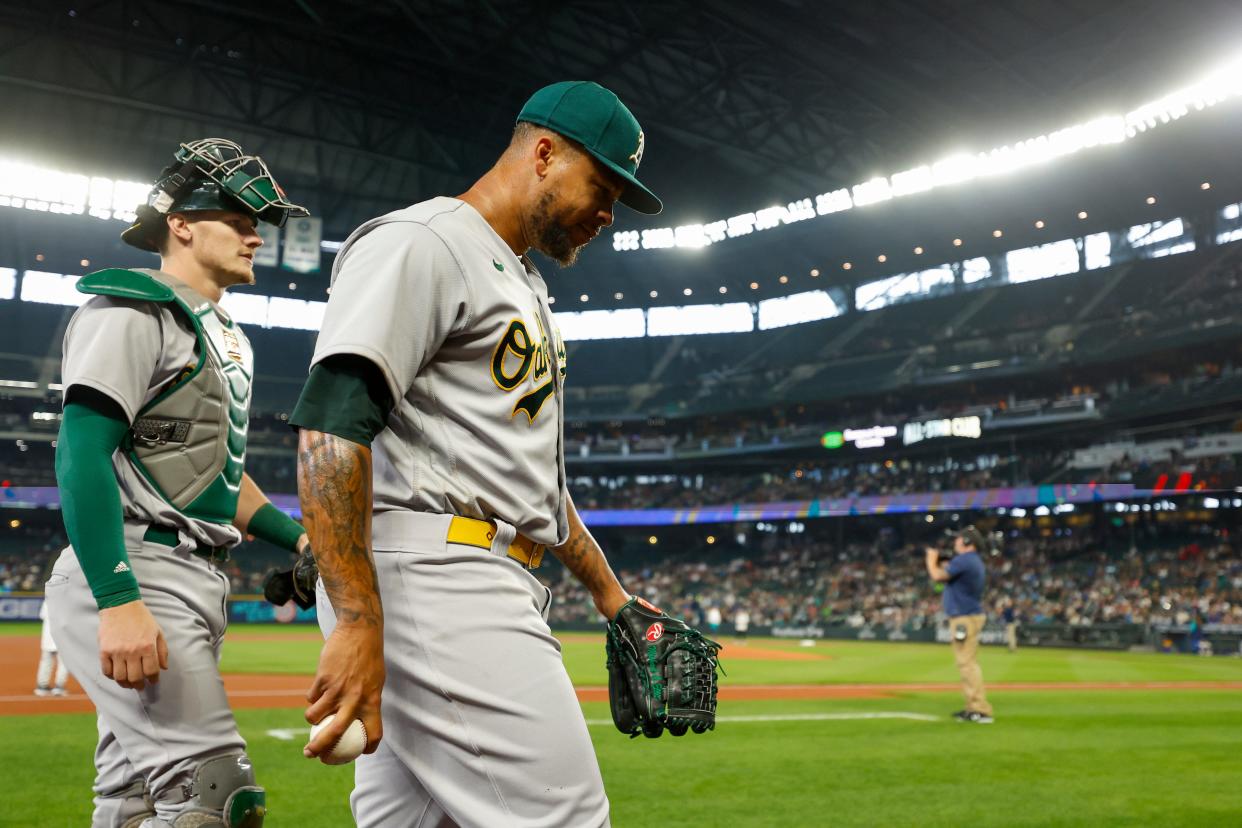 Like Castillo, the Oakland right-hander is under 30 with team control through 2023. Montas, who finished sixth in AL Cy Young voting last season, would boost a St. Louis rotation that is down Jack Flaherty and Steven Matz for the foreseeable future. Montas has 109 strikeouts in 104 ⅔ innings, while the Cardinals rank third-to-last in baseball with 7.42 strikeouts per nine innings.

St. Louis catchers have an MLB-worst .503 OPS and Murphy (11 HR, 40 RBI in 90 games) is under team control through 2025, giving the Cardinals a succession plan with Yadier Molina retiring after this season.

The Cardinals have the prospects to pull off a huge deal like this, but that may be complicated by their pursuit of Juan Soto. 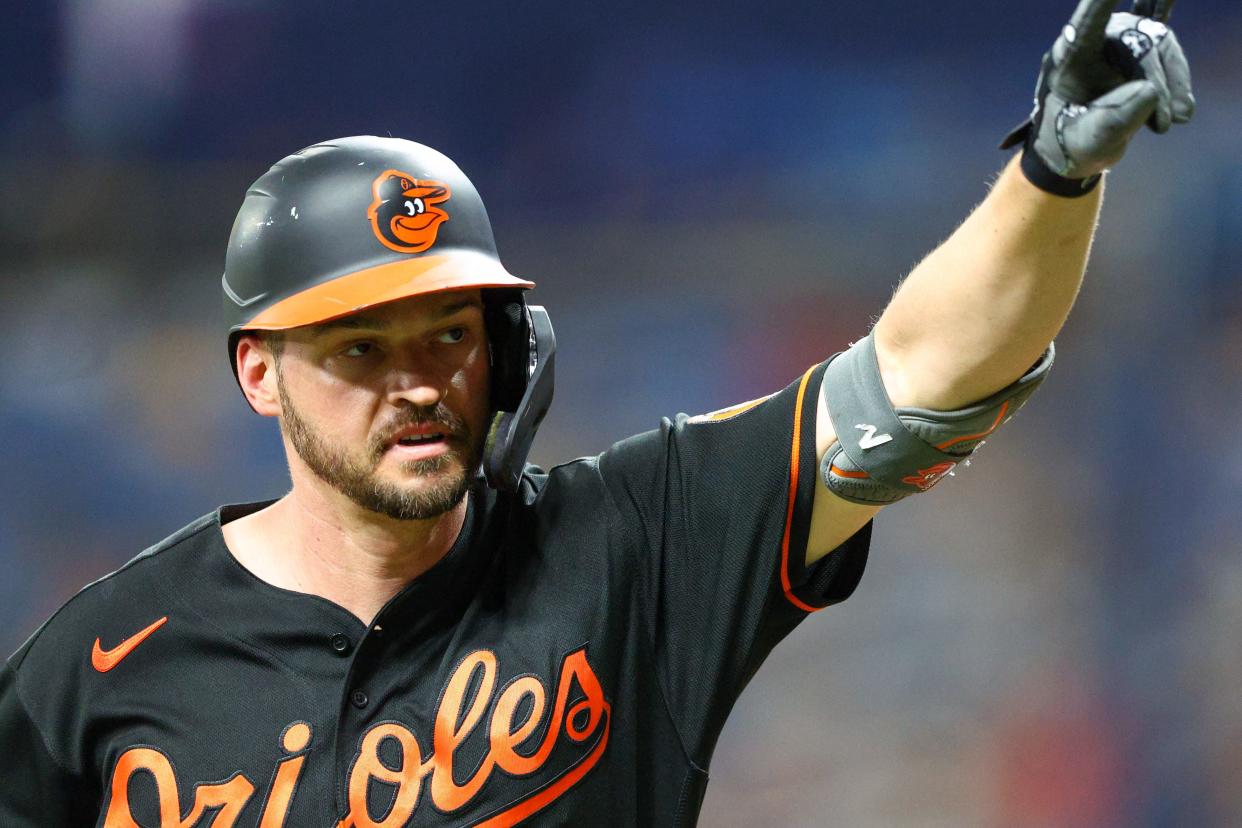 Trading a fan-favorite to a division rival certainly wouldn’t be great optics for the Orioles! They’re likely to sell off some assets in the days to come and Mancini may be their most valuable.

With Bobby Dalbec (77 OPS+) getting most of the at-bats, Boston’s first basemen have baseball’s third-worst slugging percentage. Making a move would signal that the Red Sox are serious about getting into the postseason and installing Mancini at first would shore up the middle of Boston’s lineup. 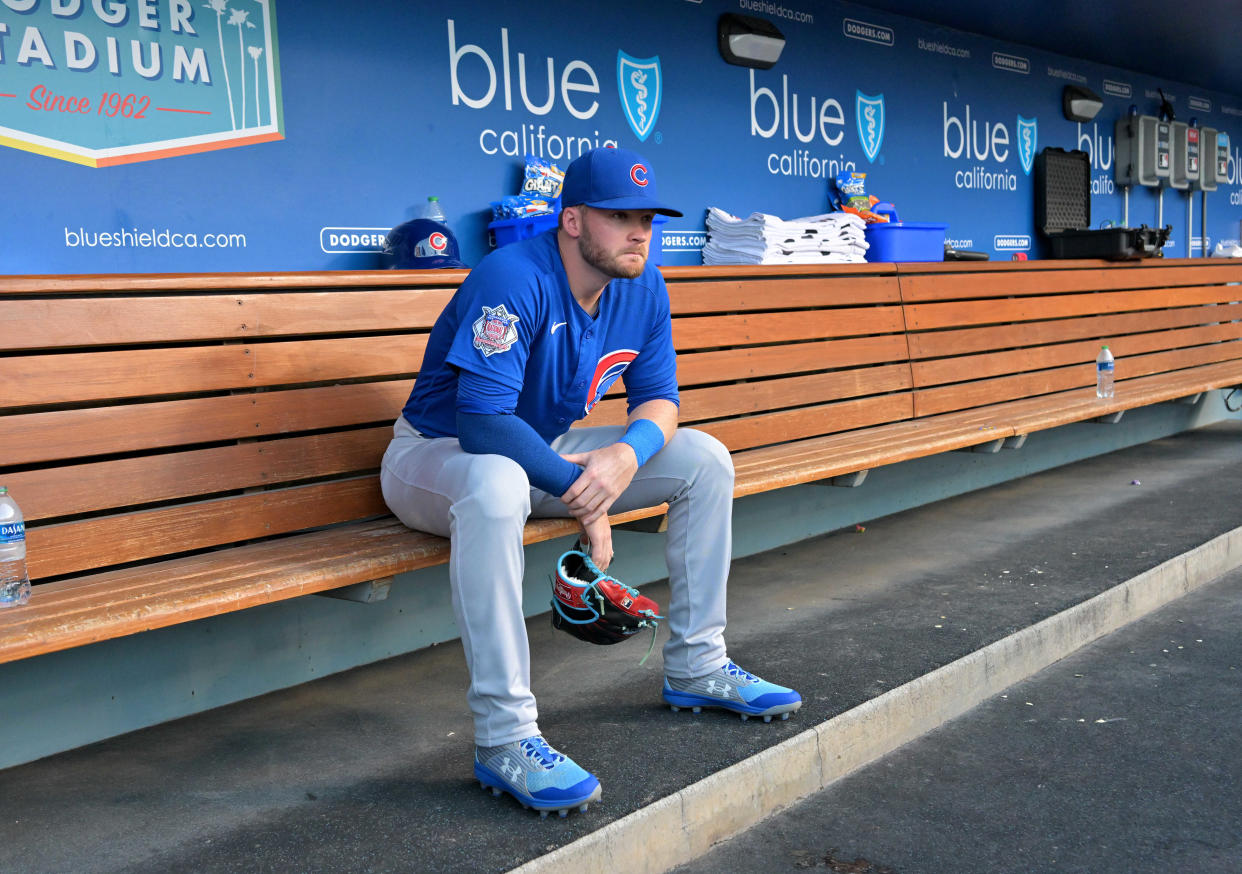 San Diego has been in desperate need of an outfielder (or two, possibly three).

Happ hasn’t been homering this year (9 HR in 95 games) after hitting 25 last year, but has 25 doubles (sixth in the NL) and would immediately become the best hitter in a Padres outfield that ranks second-to-last in baseball with a .345 slugging percentage.

An All-Star for the Cubs, the 27-year-old won’t be a free agent until after the 2023 season and could be part of a deal with Contreras.

Things haven’t gone well for the 42-year-old this year, hitting just eight home runs with a .664 OPS in 89 games. That’s not ideal for the Nationals, who signed him with the unstated intention of flipping him a few months later.

The Mariners would be wise to make a low-risk, high-reward deal for their old friend who averaged 41 home runs and 104 RBI for Seattle from 2015-2018. If Cruz has a second-half hot streak left in the tank, he could wind up being one of the deadline’s most impactful bats.

Another reunion! The left-handed starter began his career with the White Sox, posting a 3.51 ERA and a 2016 All-Star appearance in six seasons with the club before they traded him to the Cubs in 2017.

The 33-year-old Quintana is having a nice season with the Pirates (3.70 ERA in 19 starts) and going back to Chicago could be in everyone’s best interest as White Sox starting pitchers rank in the bottom of baseball with a 4.01 ERA.

Quintana doesn’t exactly eat innings (97⅓ in 19 starts), but the White Sox need that consistency as they chase a third consecutive playoff appearance.

This may be the most boring deal on the list but Minnesota needs a starting pitcher and Lyles is one of those, leading the AL with 20 starts for the Orioles.

His 6.12 ERA away from the now-pitcher-friendly Camden Yards gives some pause but the veteran right-hander is a reliable veteran (4.43 FIP) who can provide quality late-season innings for the AL Central leaders.